Who says small can’t be beautiful? AMP Design Co. proves that style and function can be had even in a 700sqft apartment.

The prospect of downsizing to a smaller space can seem daunting, especially when you are moving from a five-room condominium to a small apartment. That however, did not deter the homeowner of this 700-square-foot apartment from being adventurous with the design details. Other than taking on an eclectic style combining Peranakan and industrial-inspired design accents, Design Director Amanda Pang, who was commissioned to work on the overhaul, was also tasked with creating a good amount of amenities and storage out of this space-challenged apartment. She says: “The main challenge was to create as much storage space as needed, and without crowding or making the small space feel claustrophobic.” 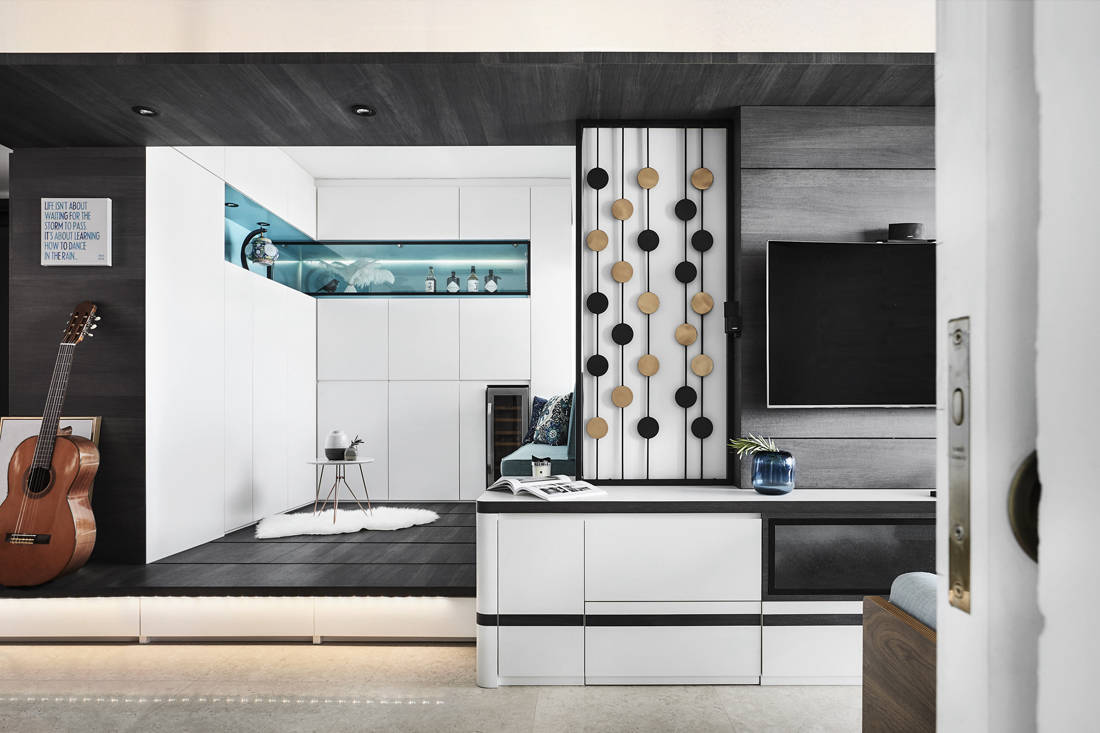 Besides requesting for lots of storage, the homeowner also wanted a chill-out area where she could enjoy some downtime after a long work day. This is achieved with a major space reconfiguration, where one of the two bedrooms has been hacked away to expand the communal zones. This newly-expanded area now features an entertainment space outfitted with hidden storage from top to bottom. To pull off a cohesive design language, Amanda applied a dark wood flooring to visually link this area to the main living zone. This ultimately also serves to visually elongate the already expanded communal space. A customised metal grille design is implemented as a decorative focal point in the living room. These circular motifs in black and gold are an artistic representation of musical notes, which reflects the homeowner’s love for music. 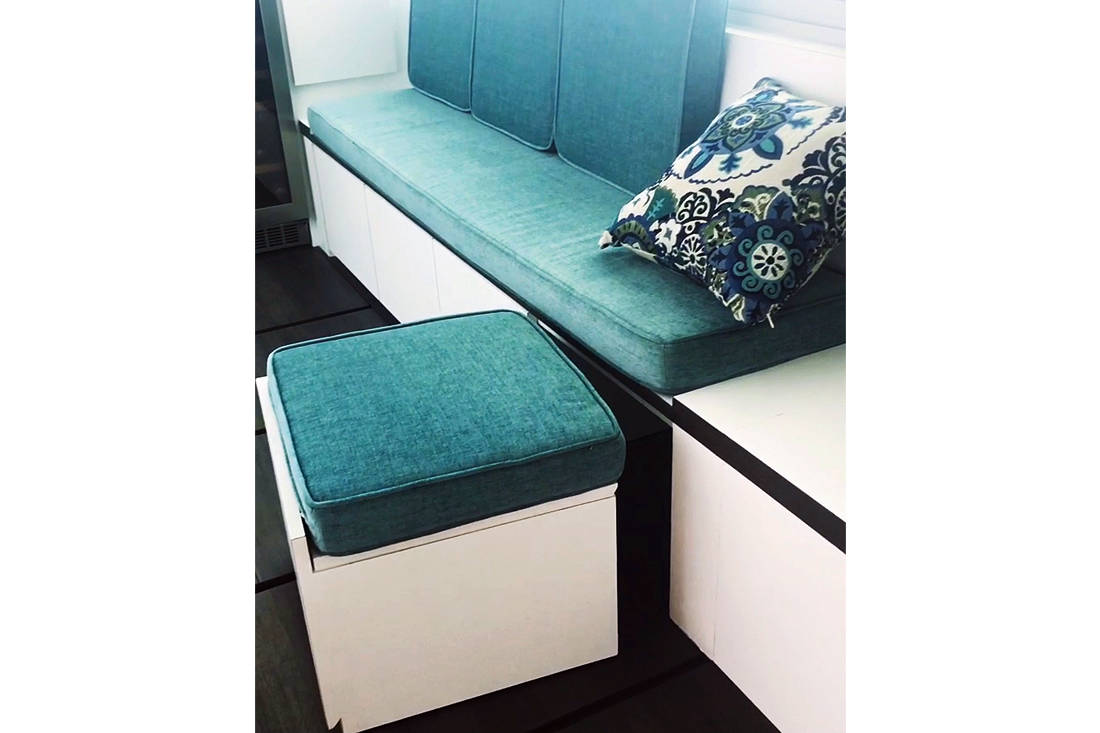 Hidden storage can be found beneath the floor boards of the raised platform in the entertainment area. This allows the homeowner to store her shoe collection without cluttering the small space. Amanda also designed four stools of dual-functionality, which are hidden and sit flush within the settee when not in use. These storage stools work well for when the homeowner requires extra seating for visitors. To further maximise and streamline this space, the designers integrated a hidden study beneath the elongated display shelf and a moveable coffee table that conceals seamlessly beneath the TV console. 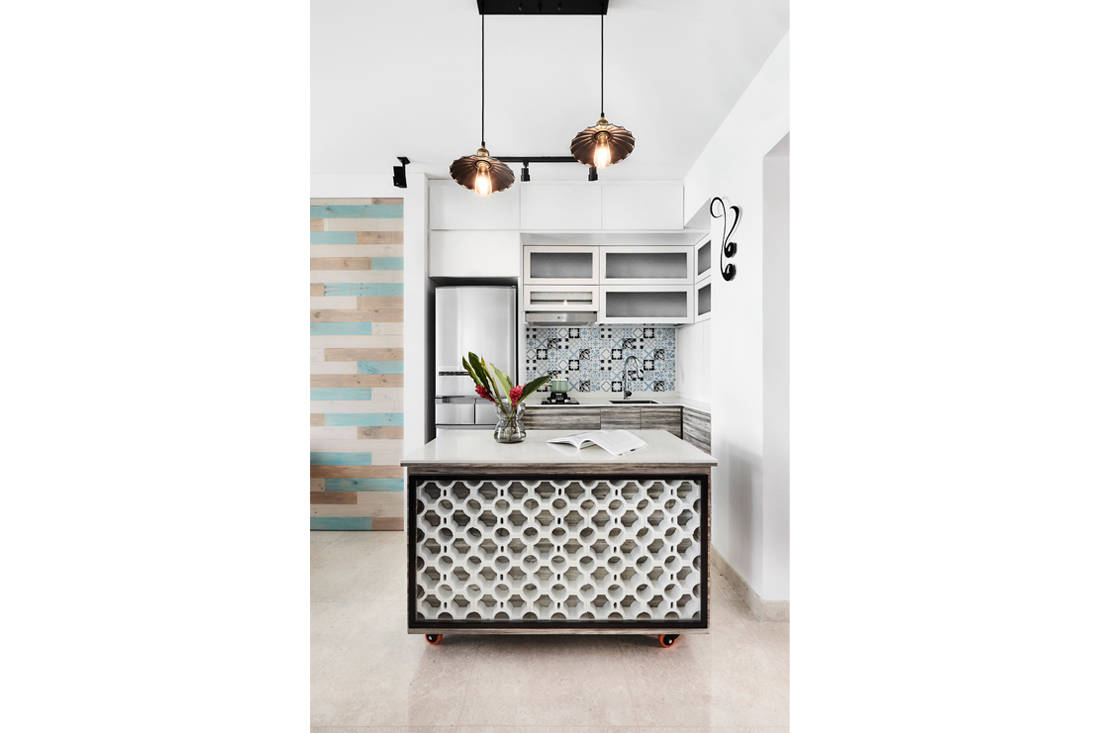 Peranakan style influences are prominent in the open-concept kitchen. Amanda says: “The use of vintage ventilation blocks and patterned tiles allude to the distinct style. We also chose turquoise and dark blue tones as accent colours as these are the homeowner’s favourite shades.” They also selected brass finished pendant lights, fringed by scallop details to complete the vintage Peranakan look. 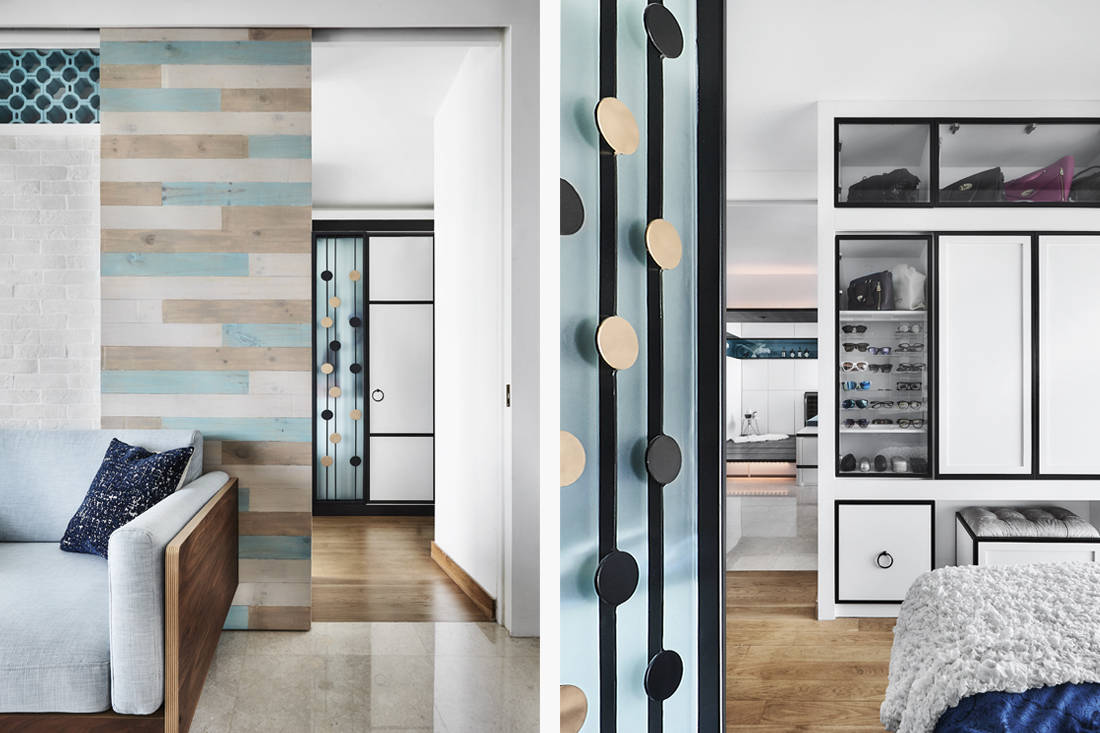 One of the biggest challenges was nailing the feature sliding door panel, which leads towards the master bedroom. The first attempt by the contractor did not make the cut as the colours and grainy textures on the joined wood pallets fail to show up prominently on the surface. He got it right the second time by stripping the first coat and painting it over with the right intensity to better reveal the distressed wood textures. The top of the wall also features another Peranakan design detail of coloured ventilation blocks, which filters daylight into the living room and master bedroom. 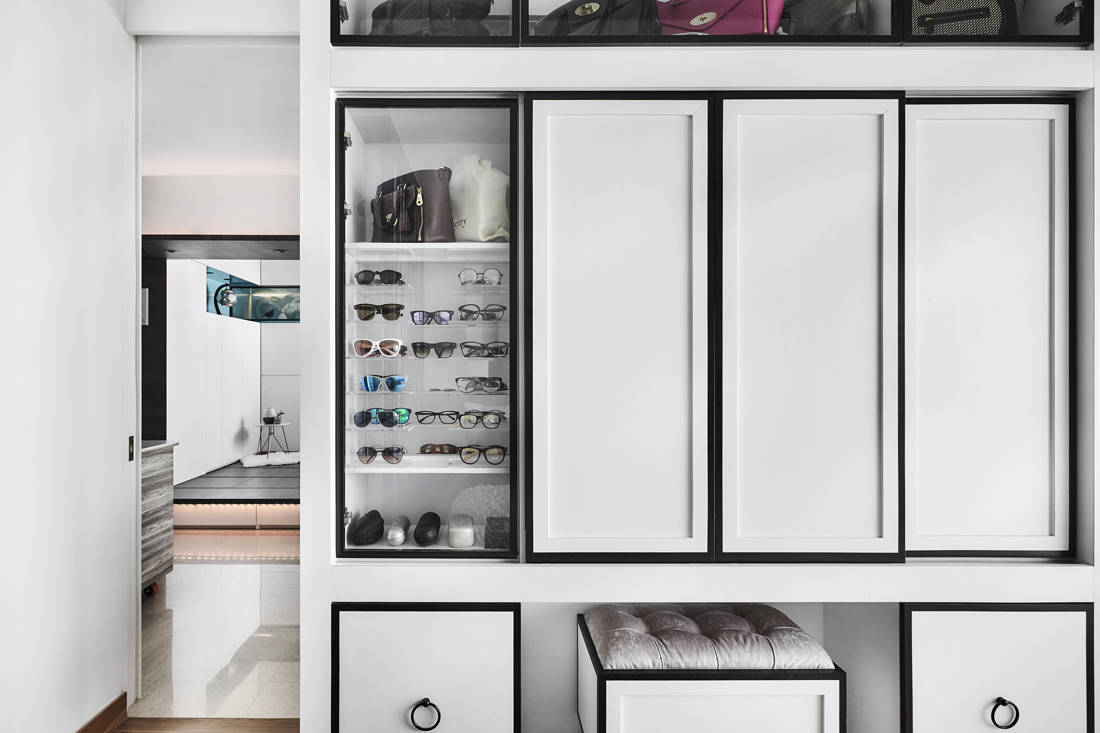 Much like the entertainment area, Amanda had to play it smart to maximise the space potential of the master bedroom. Hacking away the boundary wall between the bedroom and living room proves to be essential in fully utilising the floor area. A full-height closet space is built instead to separate the two areas. Custom storage compartments to showcase the homeowner’s collections of bags and eyewear keep the clutter under control. A custom bed frame with storage is built to store the owner’s diving and sports equipment/apparel, while the TV is hidden within the built-in dresser for a seamless aesthetic. 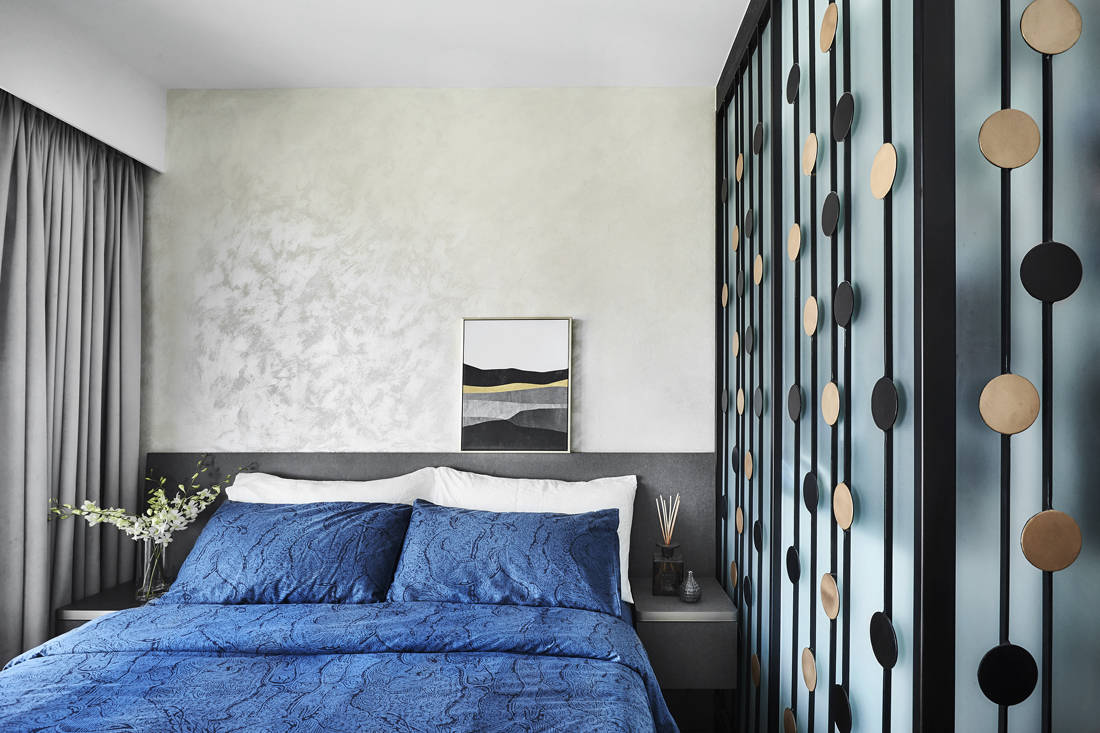 The customised metal grille design is also implemented as a decorative feature for the frosted glass divider in the sleeping quarters. This bespoke design detail works as a visual connection to link the public and private zones. 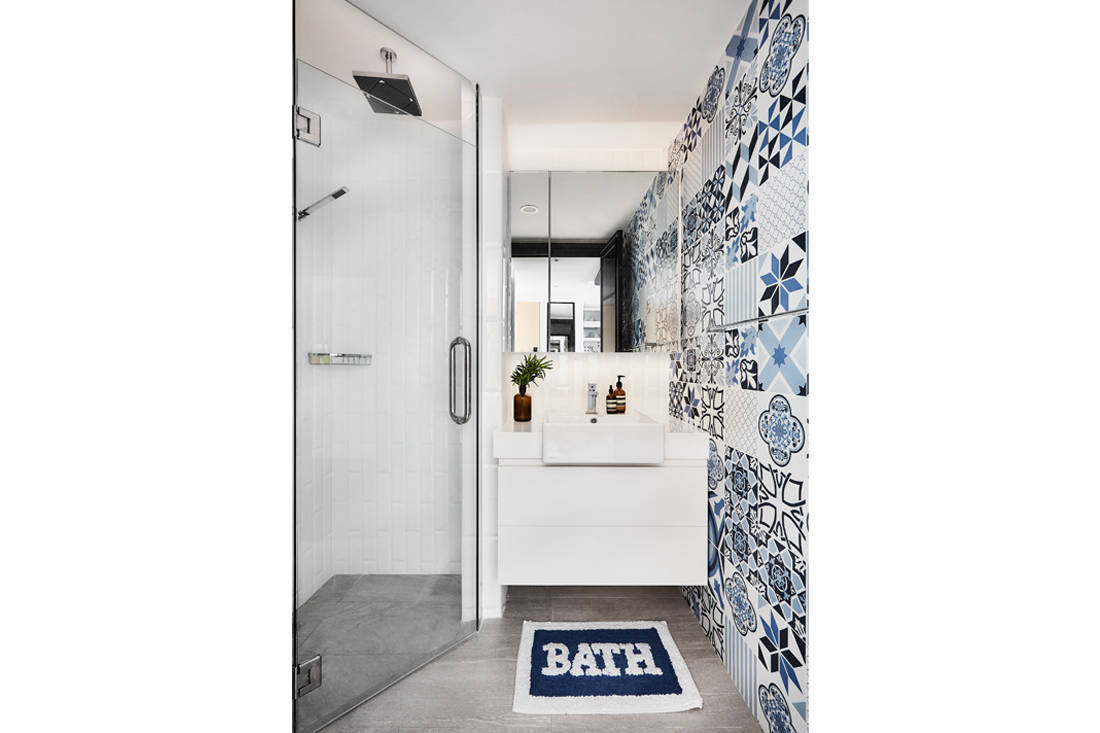 In the bathroom, a crisp white backdrop of subway tiles sets the stage for the blue Peranakan tiles to take precedence. This accent colour follows the colour scheme in the kitchen and achieves visual harmony in the home. For an industrial aesthetic, Amanda utilised cement-like floor tiles and with its neutral tone, this ties the entire Peranakan-industrial style together beautifully.