Here are the seven incredible homes in Singapore that are in the running for the title of Best Small Space Living at LBDA 2019.

We’re thrilled to present the seven residences that are in the running to be named “Best Small Space Living” at Lookbox Design Awards (LBDA) 2019.

These are the projects that our esteemed panel of regional judges have picked as some of the most amazing homes in Singapore that make brilliant use of space. 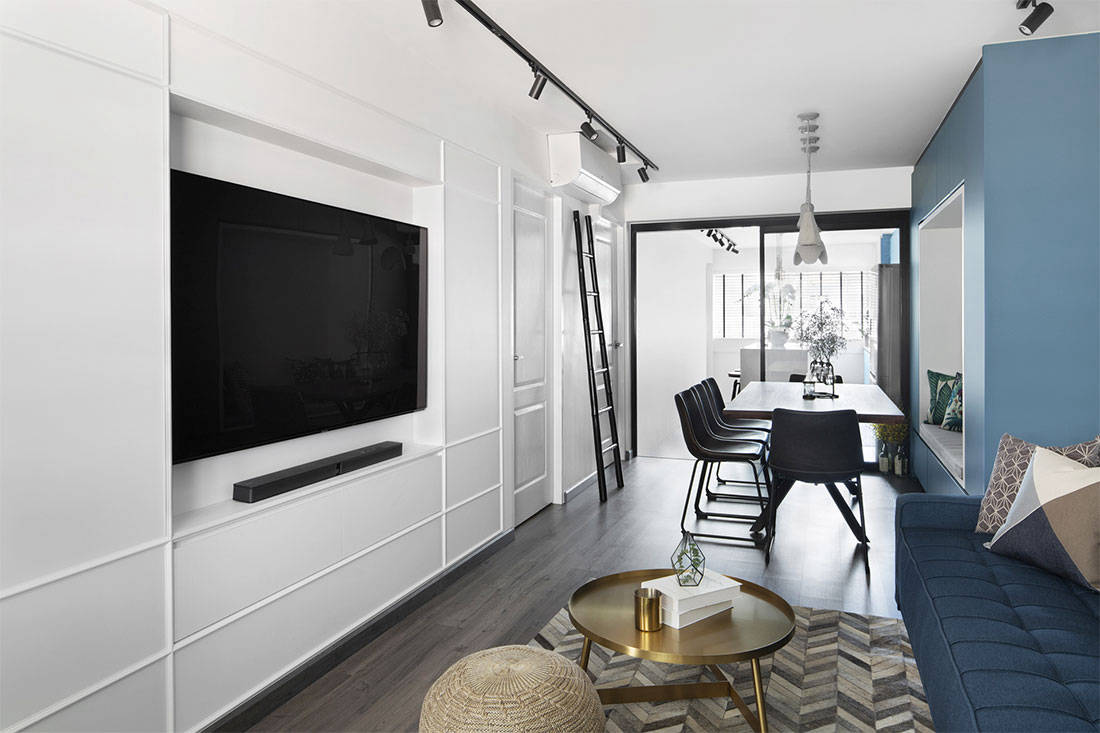 Removing as much of the internal walls as possible allowed the designer to incorporate the storage space, bright atmosphere and ventilation that the owners wanted in this small 720sqft unit. With the store room demolished, the long, continuous volume that houses the communal spaces is now able to accommodate a kitchen island, a large dining table and banquette seating with cabinets wrapped around the latter. To carve out more space in the flat, the wall between the children’s bedroom and living area has been replaced with a custom full-height wardobe on one side and a TV console on the other. Two bathrooms have also been combined into a single, larger space that can still be accessed via the master bedroom and kitchen. 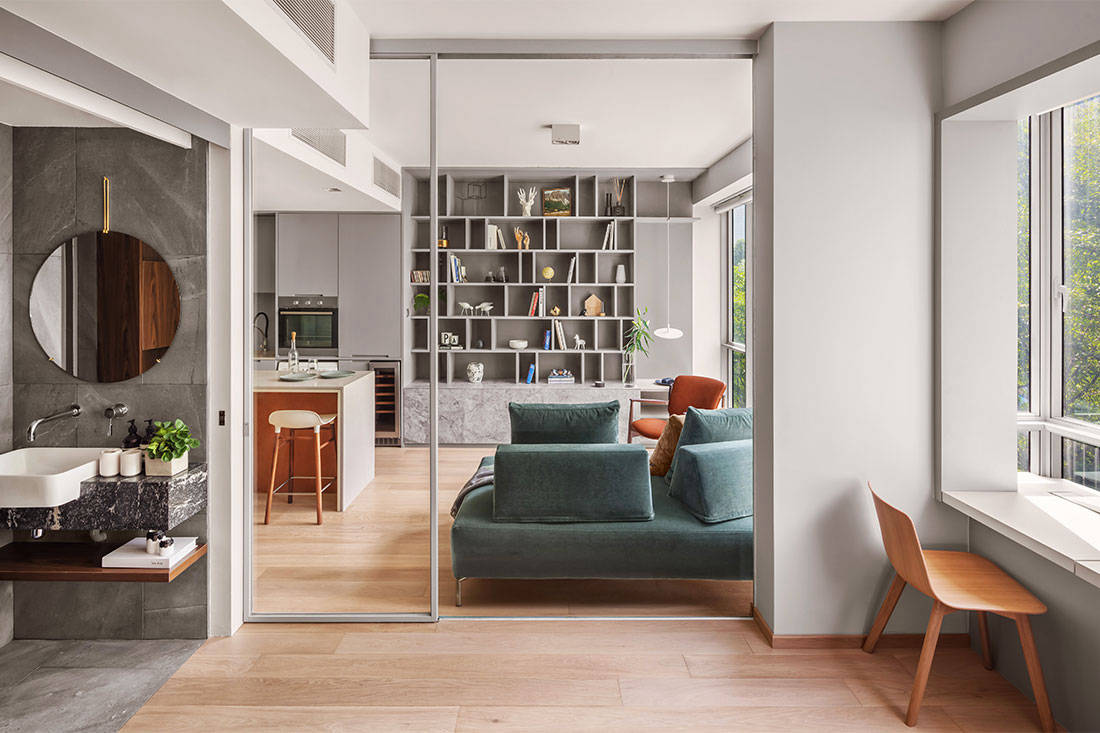 While this one-bedder is merely the size of a small hotel suite, it’s cosy and quiet and allows the owners to escape the busyness of city life while still be centrally located in the heart of town. The full-length windows offer lush views of greenery, which the designers worked to their advantage to create a retreat space for the owners. The sofa, desk and other important functions were positioned close to the windows so the greenery could be enjoyed. Scale and view wise, the design alludes to an intimate forest cabin nestled amongst the foliage. The choice of materials and colours also add warmth the space. 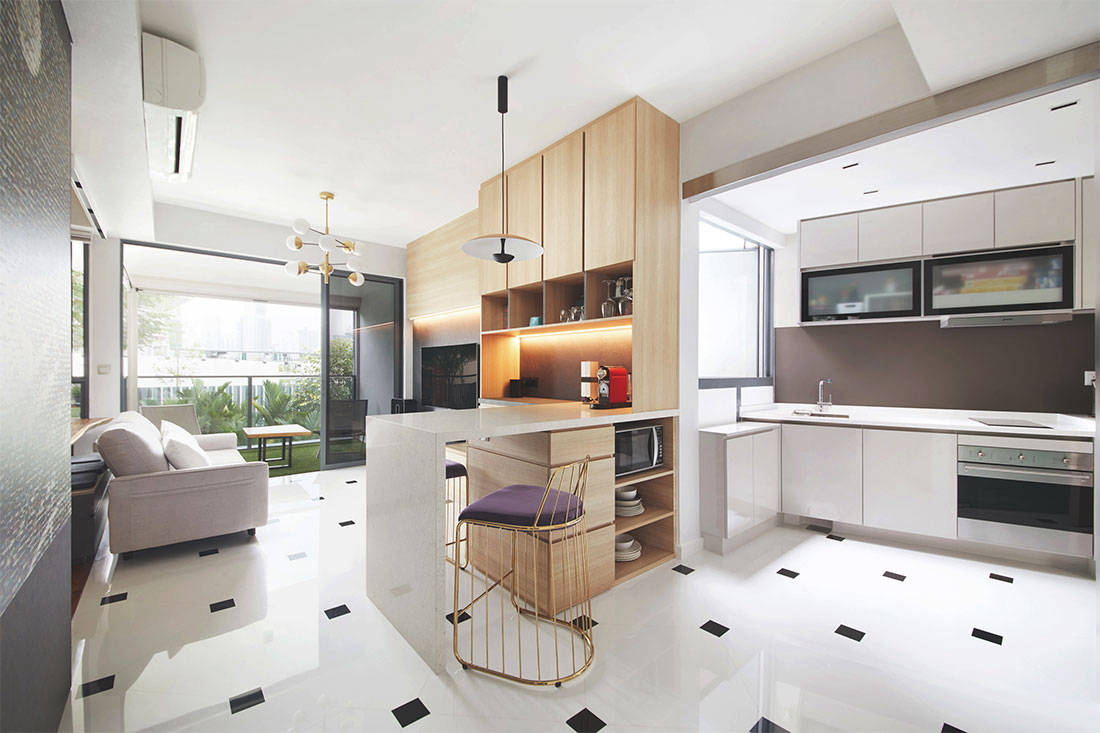 The couple living here have a hectic work schedule and didn’t mind a smaller bedroom in favour of a larger living and entertainment space. So the master bedroom was relocated to the common room and the original space has been opened up to create an extension of the living area. Multifunctionality came into play as the space now accommodates the dining cum study, with a wall full of cabinets for open and concealed storage. Similarly, a large sliding panel serves as both the master bedroom door and a backdrop for the couple’s travel photos, which were made into a collage that depicts the Eiffel Tower. Furnishings were kept simple with restrained material and colour palettes for a streamlined appearance. A dry kitchen was even constructed for additional storage and acts as a bridge between the living area and kitchen. 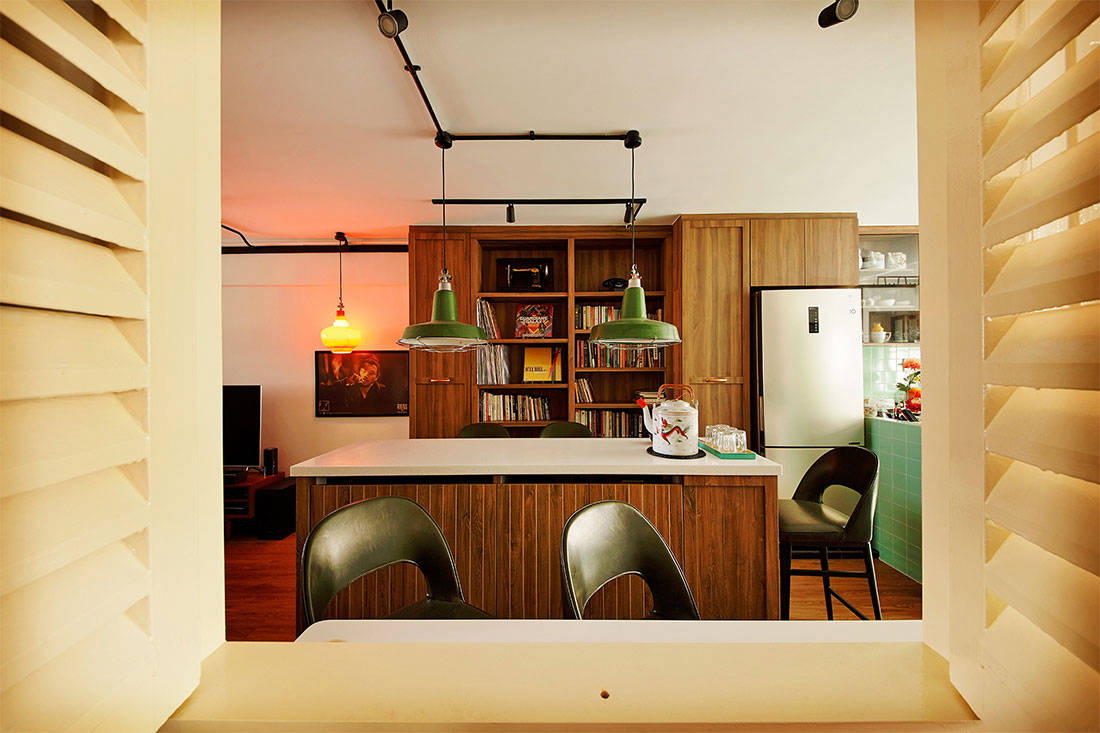 Most tiny residences employ a minimalist aesthetic to create the illusion of space, but the owner wanted to outfit his home with an ‘80s style that alludes to his childhood home at Tiong Bahru. Mosaic tiles, mid-century furniture and retro lighting dress the interiors. To counterbalance the bold furnishings in such a small flat, the kitchen, dining and living room were opened up, creating a rectilinear design that improves flow and movement. An opening is carved out of the master bedroom wall to fit a louvred window, in order to optimise natural light and airflow. Similarly, the entrance to the study has been expanded and fitted with glass doors. To further maximise space, the designer did away with the original corridor that leads into the bedroom and study. 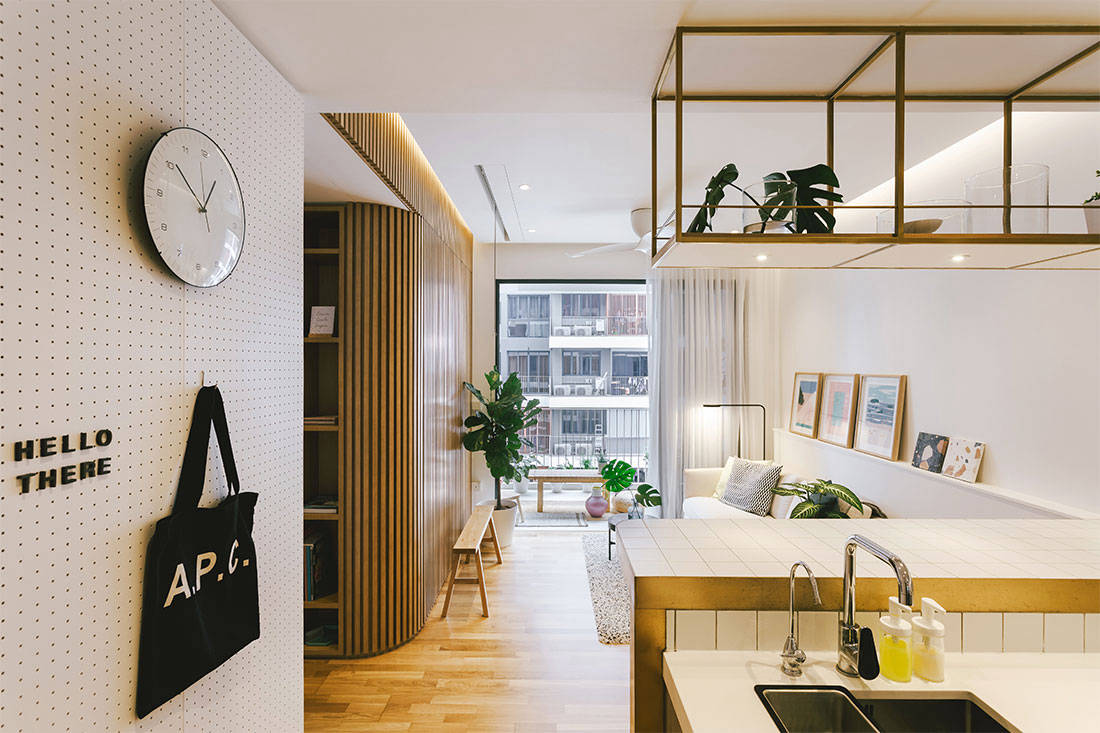 The design aims to achieve a clean and minimalist form that are well coordinated but at the same time not being overly sterile through the use of wood, brass and curved elements (breakfast counter, wood slate feature wall and archway). Spatial thresholds were experimented in the design to subtly differentiate each area, and to expand the space visually and in the imaginative realm. Every nook and cranny has also been cleverly utilised and serves specific functions to avoid dead spaces. With a wider corridor as a result of the walls being pushed back further into the common bedroom – which has been converted into a walk-in wardrobe and accessible from the master bedroom – an open bookshelf that seamlessly connects to the slatted feature wall adds a functional feature to the passageway. 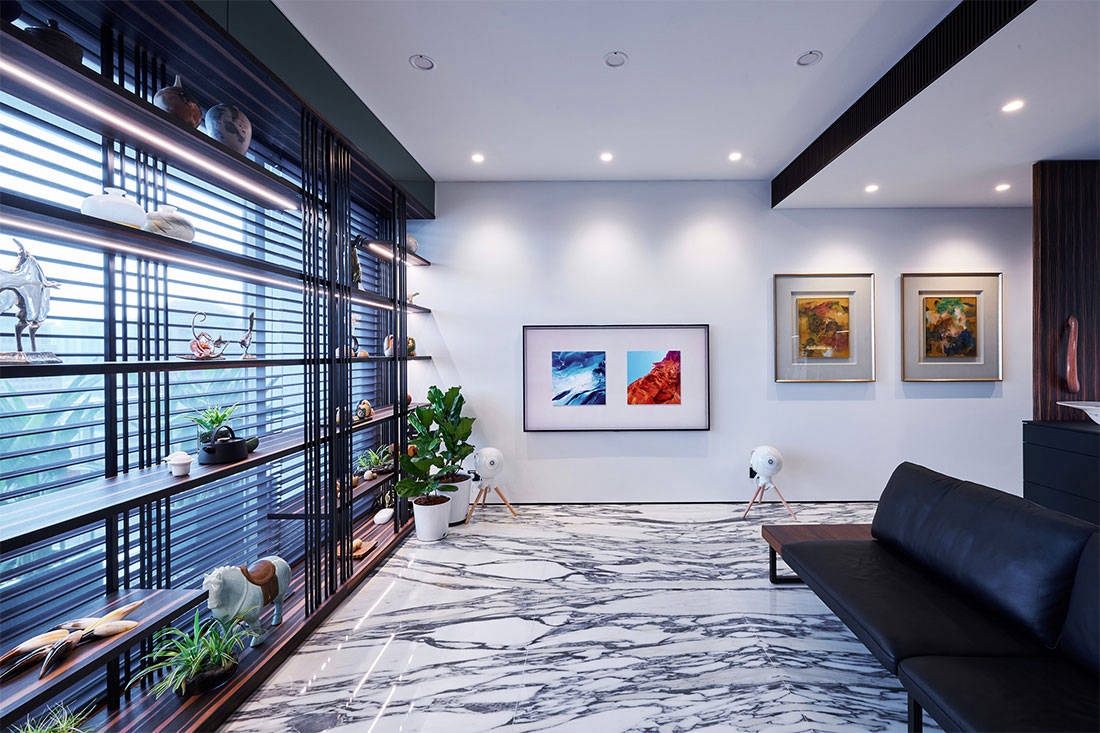 Originally a one-bedroom unit that comprises a private lift lobby, a living room with a dry kitchen, a bedroom with an en suite and a balcony, the entire apartment has been reimagined as a gallery-like home office. Walls were removed to string up all the spaces seamlessly as a continuous fabric. A long gallery wall sets the tone for the apartment and create the perspective of depth. Aiding to this is the marble flooring that doesn’t seem to terminate. To prevent the feeling of confinement, an open-concept kitchen and bathroom is adopted. As the owner is the sole user of the apartment, the bathroom did away with a door and is particially enclosed with one-way mirror glass so that the owner can see the exterior (living space and beyond) within the bathroom. 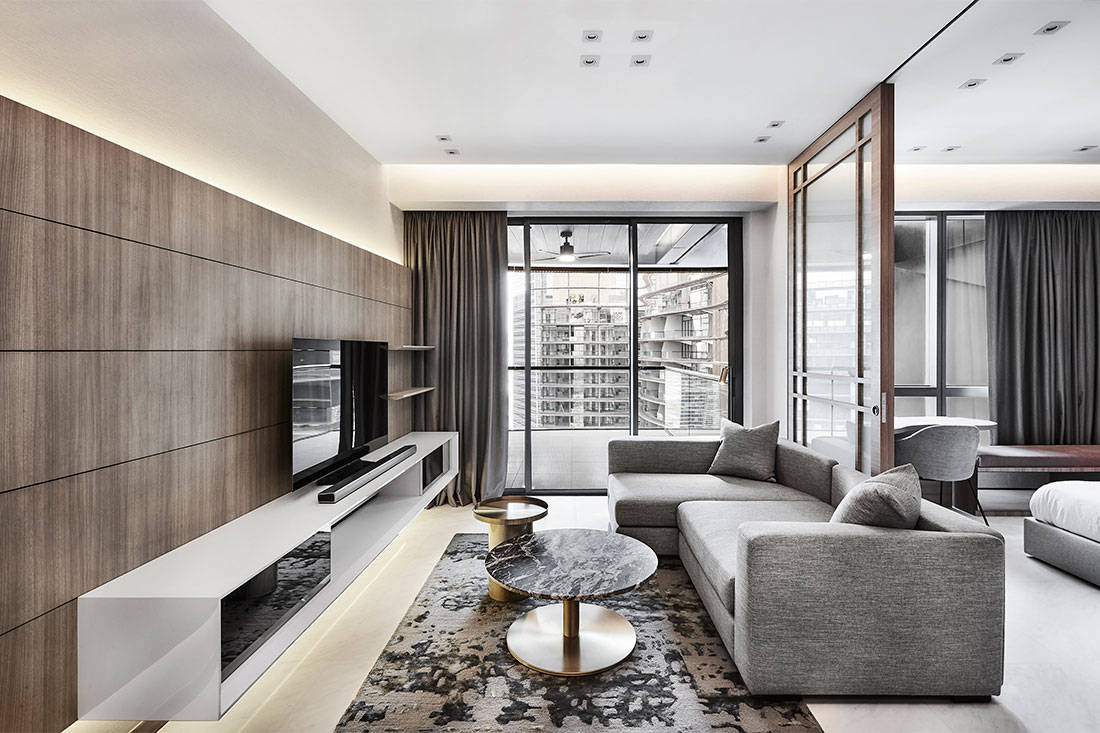 Designed as a holiday home with a hotel-like ambience in mind, the compact space has been enhanced with a warm colour palette coupled with bronze accents. The original layout that connects the sleeping bay with the living lounge had foldable doors that were not very suite-like. So the designer replaced them with a combination of sliding glass panels and swing doors, which allows light to filter through and also functions as a feature wall when they’re closed. Further to that, a breakfast counter has been added onto the existing kitchen island to maximise available space.