Here are the seven beautiful houses in Singapore that are in the running for the title of Outstanding Landed Home at LBDA 2019.

We’re thrilled to present the seven houses that are in the running to be named “Outstanding Landed Home” at Lookbox Design Awards (LBDA) 2019.

These are the projects that our esteemed panel of regional judges have picked as some of Singapore’s most beautiful homes. 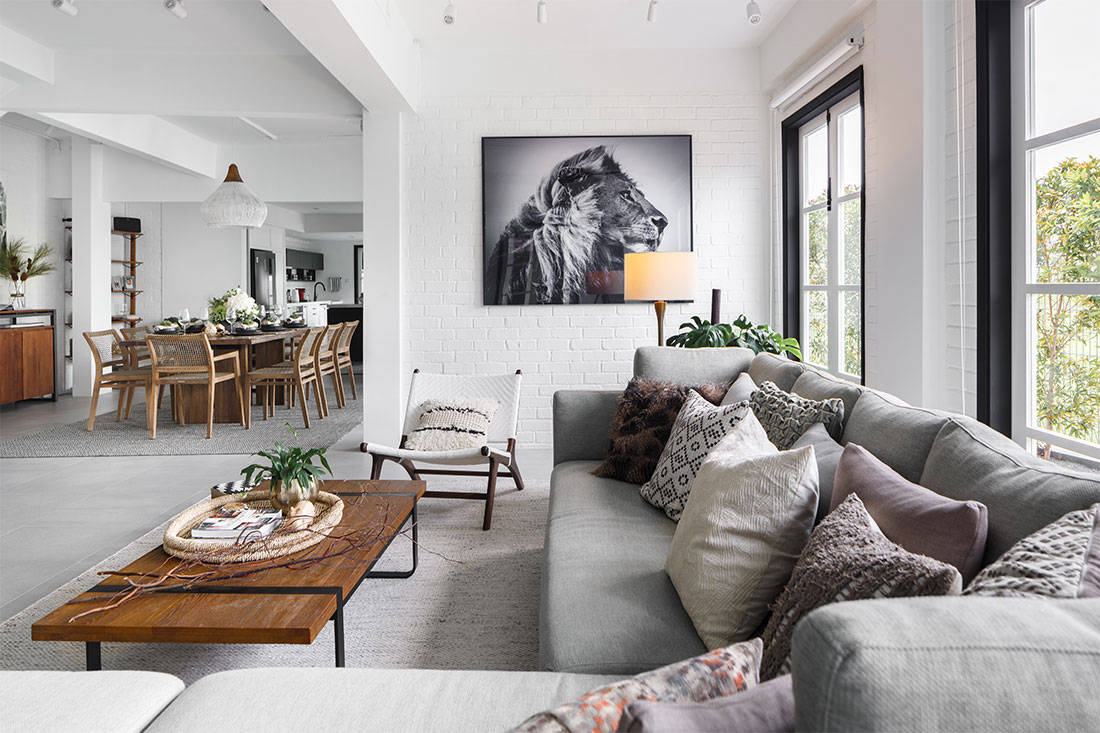 The owners love the great outdoors and photograph wildlife as a hobby.  The house also had old colonial-style windows. As such, the designers decided to create a quintessential garden home while weaving themes and hints of South African culture and wildlife into it. They used the proportion and character of the full-height French doors to play up the height and character of the space. Geometric or patterned tiles were used in various spaces to subtly demarcate a new space and/or function and to inject a new “rhythm” and burst of fun to an otherwise neutral palette. Materials like rattan were woven into furniture to create a consistent “glamping” narrative. Texture was pivotal to this project and was created through the use of materials such as the said rattan and whitewashed wood stain carpentry. 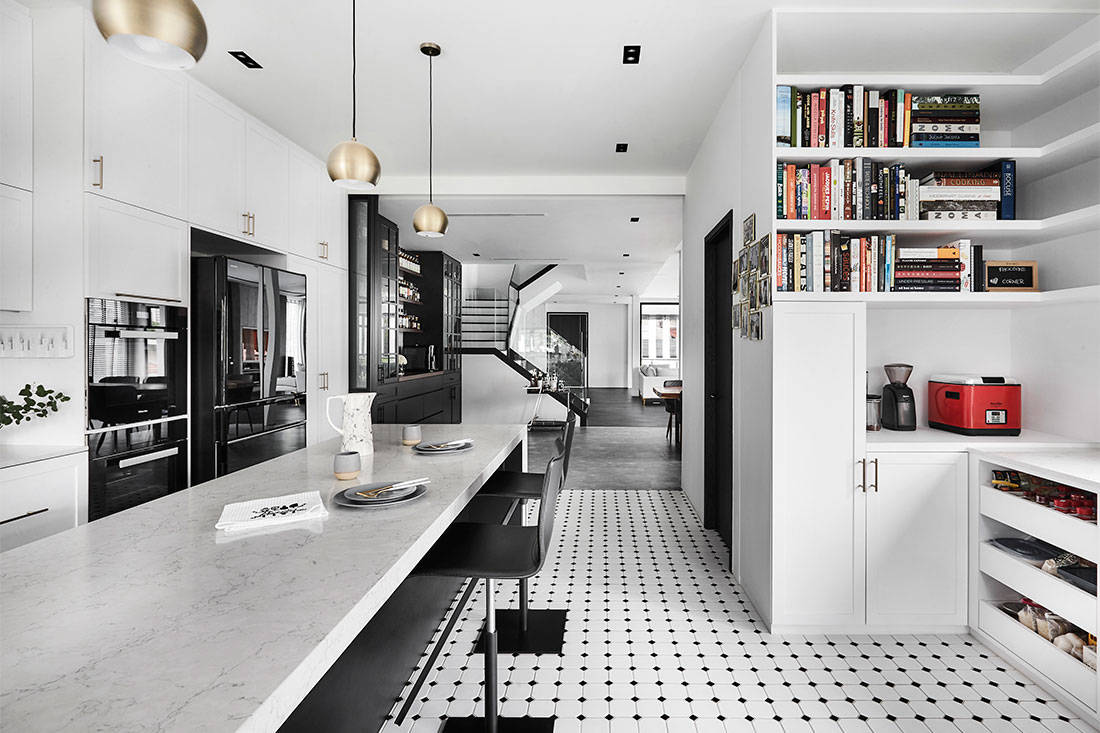 The original house was divided into individual functions, which restricted the efficient use of space. The designers have thus removed the “finite walls” to open up the possibilities of fusing spaces to enhance the flow and visual perspectives – all while keeping in mind the concept of functionality over form for future family expansion. This home combines the contemporary style with the aesthetics of a black and white colonial house. The resulting spaces are timeless and elegant, with rich detailing. This house has two kitchens. The ground level kitchen is designed for entertaining and daily use, while the basement kitchen – currently used for heavier cooking – is meant for the owners’ parents when they live with them in the future. 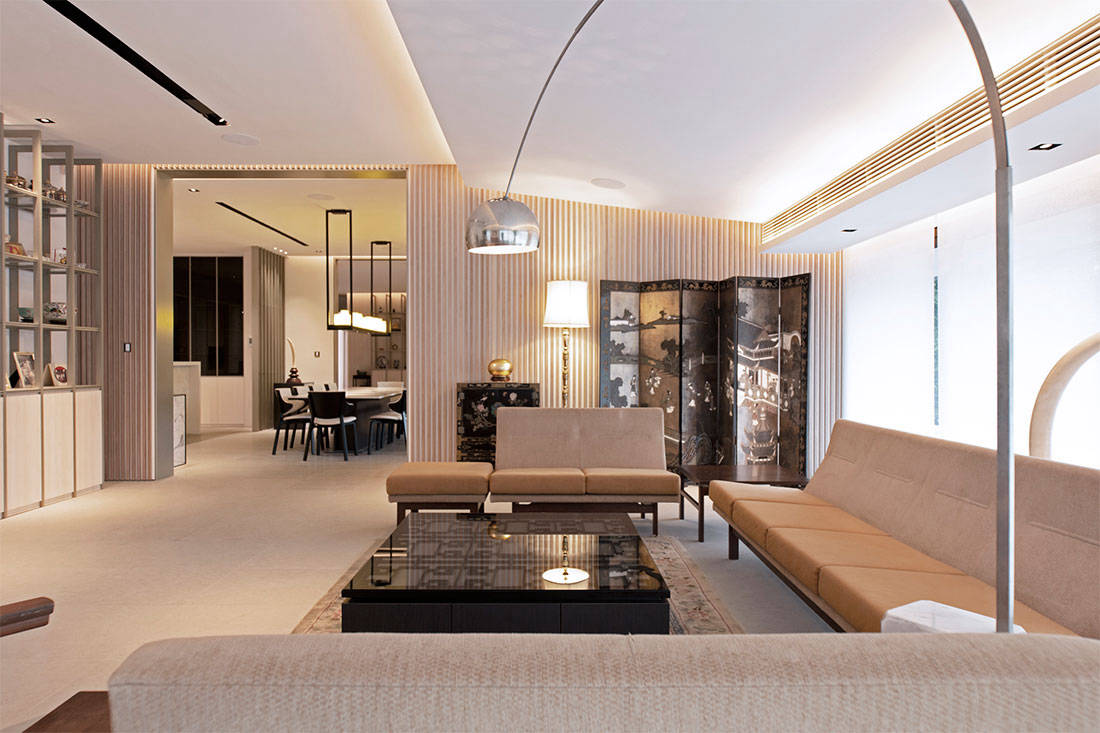 Originally built in 1939 as part of the Caldecott Hill Estate, which served as an enclave for the personnel working for the BBC Empire Service, the Caldecott House has been in continual ownership under the client’s family for the past 70 years. Various additions and alterations have been added over its lifetime. The latest iteration of the double storey property celebrates the rich history of its past, retaining the childhood memories of the current owners’ growing up years, and weaving together in with a modern timeless material palette of selected stone, aluminium screen, metal roofing, white oak flooring, and handcrafted steel door and window grilles that have been painstakingly restored. 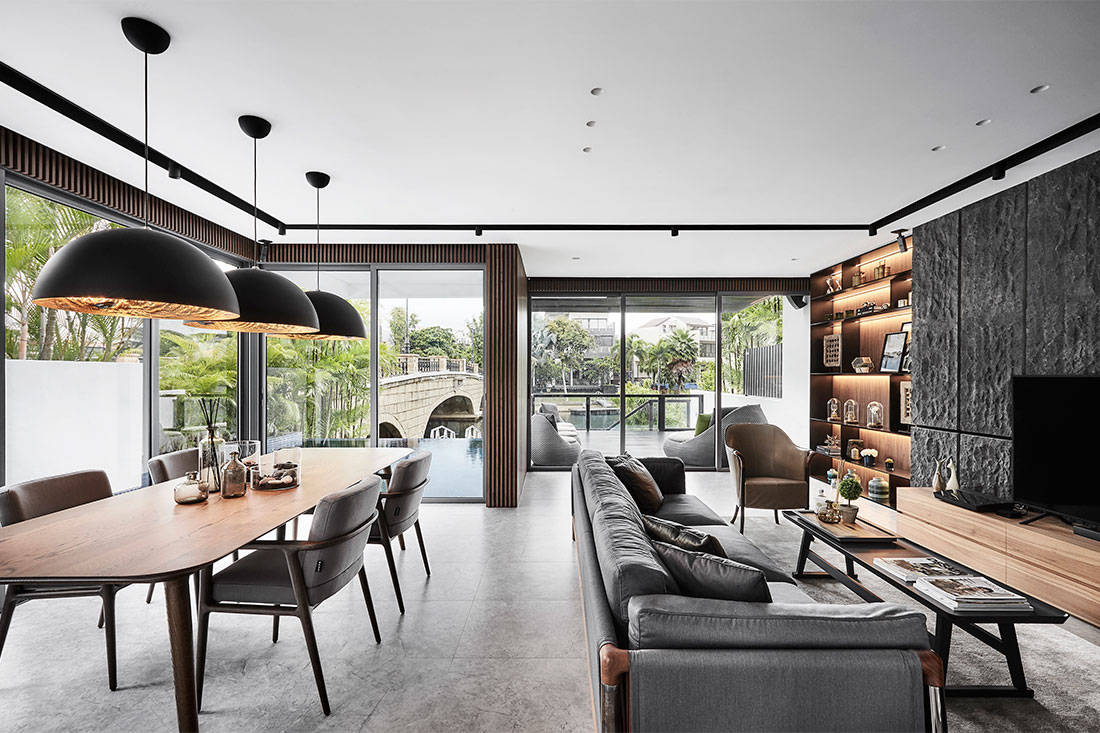 This Sentosa Cove residence is used by the owner and his family as a holiday home, and for him to entertain friends and business associates whenever he’s in town for work. The client wanted the house to have a resort feel, and the designer has created a tactile interior that responds to the natural landscapes, but executed with a modern touch. The home lacked the internal/external spatial dialogue that is typically associated with resort living, and so the first order of the day was to reconfigure the spaces for better engagement with the outdoors. Some of the notable moves included building a bridge that spans across a void on the first level to allow better access to the side terrace, and a more direct entry to the pool; and incorporating an originally sealed-off open-to-sky courtyard space within the master bathroom into the said bathroom. 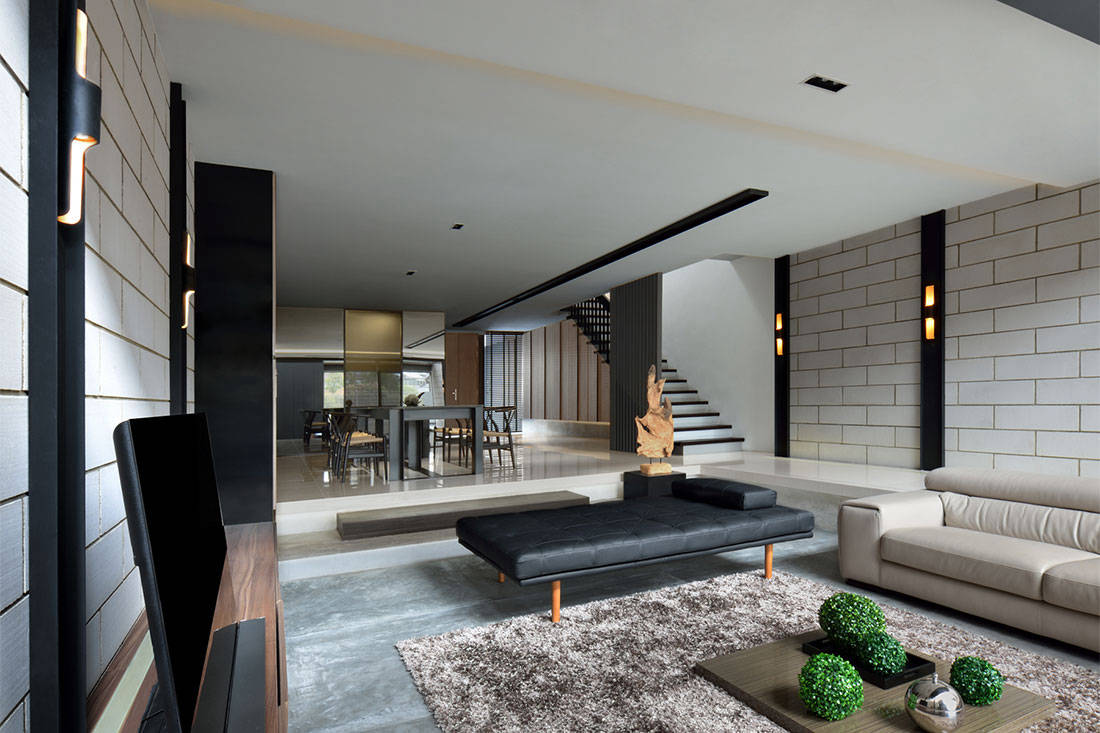 The designers have redesigned the home to create spaces that foster greater family bonding and encourage greater connections among family members. The front of the house with its close proximity to the neighbours afforded less privacy. As such, the designers have moved the main living area to the rear, which enjoys mature greenery and open sky, and the utility spaces from the rear to the front. Besides creating an extended double volume space in the living area, the designers have also reversed the layout of the master bedroom suite cantilevered above the living area so that the homeowners can supervise their toddler playing downstairs. 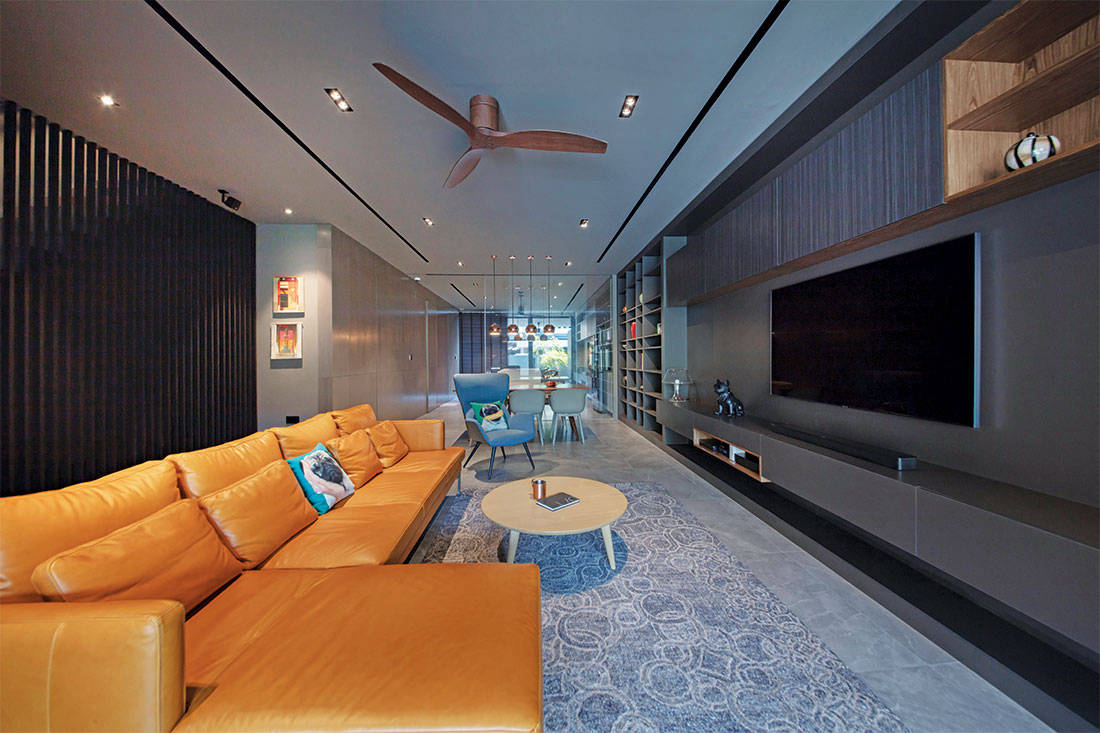 The owners love to invite family and friends over to their home, and so the designers have created a laid-back modern retreat space that caters to their desire to entertain. A mixture of textures in dark shades have been used throughout all three levels of the house to create a sleek and comfortable home. Relax vibes begin with a minimalistic water feature at the car porch. Further in is a cushy living area and a glassed up kitchen with a huge island for food preparation. The laid-back master suite on the next level features soft-lit lighting and a huge balcony. The third level serves as the main chill-out area complete with an indoor dining area for private dinners to end a great movie night in the home movie room. 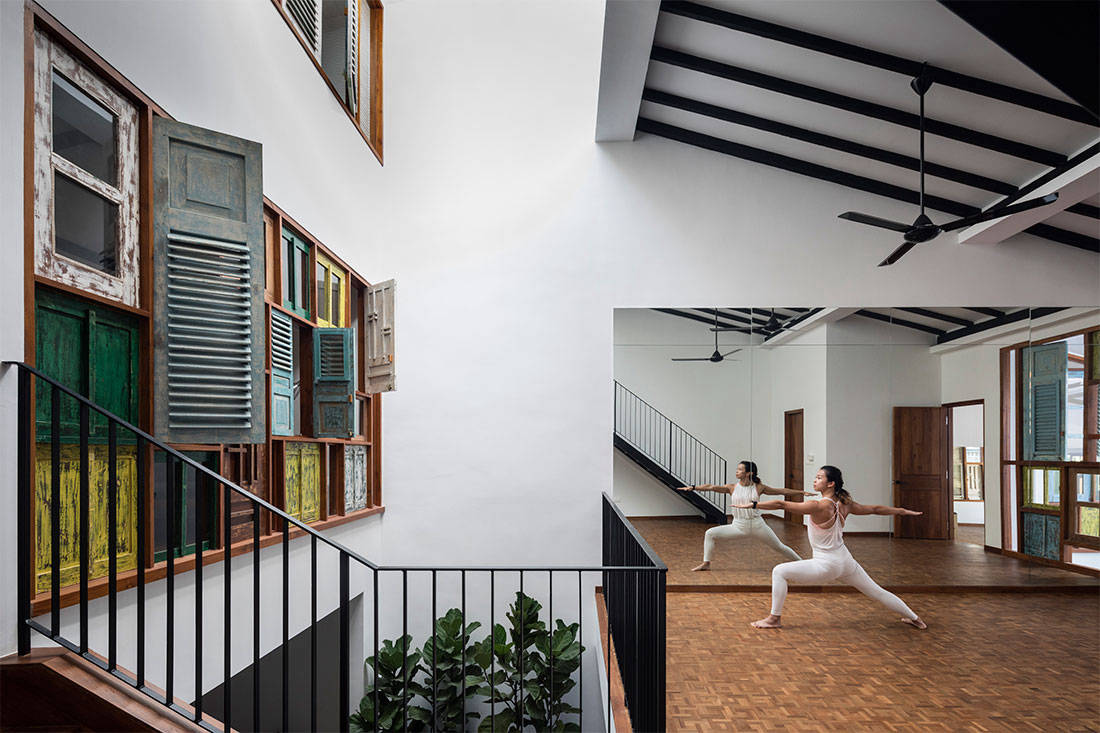 The owner, who occupies this home with her parents, wanted a studio space for the pilates classes she conducts pro bono for those with mobility issues. The home also had to be spacious enough to hold both intimate and large gatherings, including the community meetings hosted by her father, who is involved with the yellow ribbon project. The tropical kampong house was the inspiration for this project, where the goal was to create a home with an easy-going spirit, with different pockets of space to rest, play and communicate. The designers have blurred line between external and internal spaces through the use of skylights and air wells. The client was interested in the concept of up-cycling materials and has an appreciation for antique Javanese timber doors and windows. As such, the designers have restored battered timber windows/doors to be used on the house’s facade and as internal partitions.