Here are the seven inspiring homes in Singapore that are in the running for the title of Most Dramatic Transformation at LBDA 2019.

We’re thrilled to present the seven homes that are in the running to be named “Most Dramatic Transformation” at Lookbox Design Awards (LBDA) 2019.

These are the projects that our esteemed panel of regional judges have picked as some of most incredible homes in Singapore that have undergone inspiring transformation. 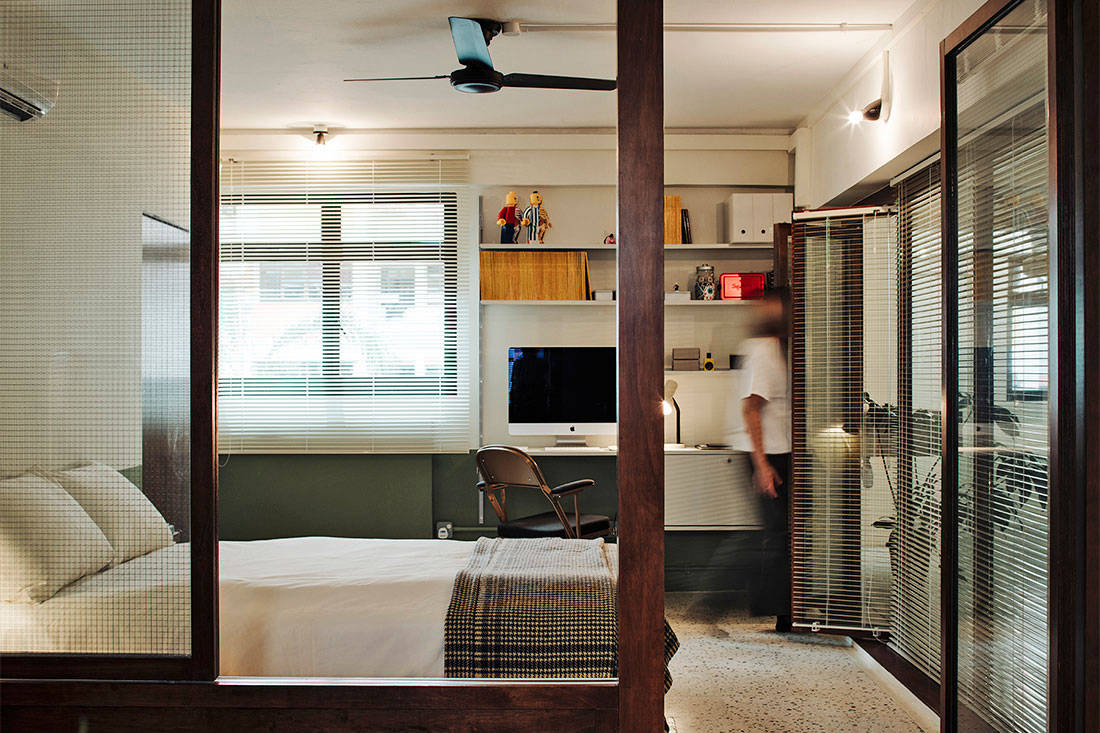 The owner wanted a retro-inspired home, and the designers have sought to preserve as many existing elements of the 38-year-old flat as possible, including the terrazzo, the main gate, and the louvred windows, along with new interior constructions rendered in concrete, plywood, stainless steel and wired glass. As the flat is only 969sqft, the designers have created free-flowing, open-plan spaces that segue into one another, transitioning only subtly as the flooring changes from terrazzo (living room) to concrete (dining and kitchen area). The combined dining table and cooking unit stands anchor as a central island. Pheripheral spaces are maxmised, with the kitchen unit and bookcase sharing a long wall. Only one bedroom has been retained and wired glass (paired with blinds) allows it to be enclosed while still letting light in.
See full home feature here 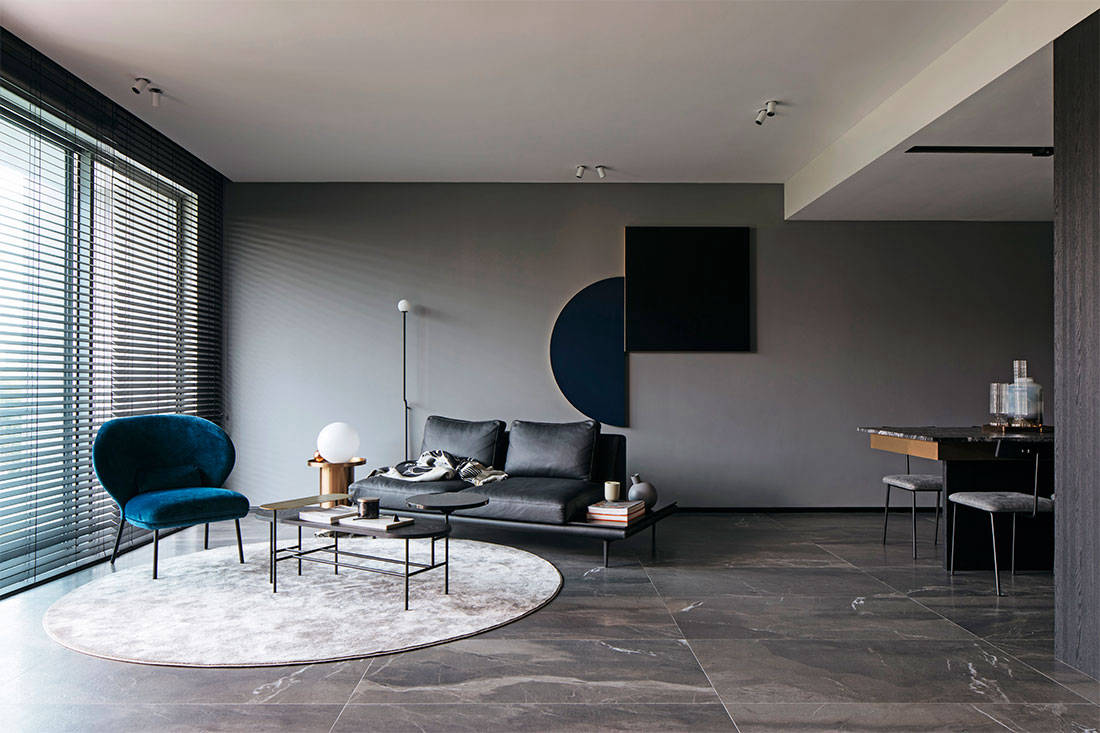 The designer has turned an apartment with an uninspiring and enclosed layout into a relaxed and minimalist home for a bachelor. Colour, form, texture, scale, as well as the flow and function of the different spaces have all been carefully considered to ensure that the elements work holistically together, and to achieve a design that is unstructured and unexpected. Most of the non-structural walls were removed and the space re-divided into a bigger living/entertaining hall, and a dining zone with an open-concept kitchen. The entrance to the master bedroom has also been enlarged to accommodate a customised artwork sliding door. 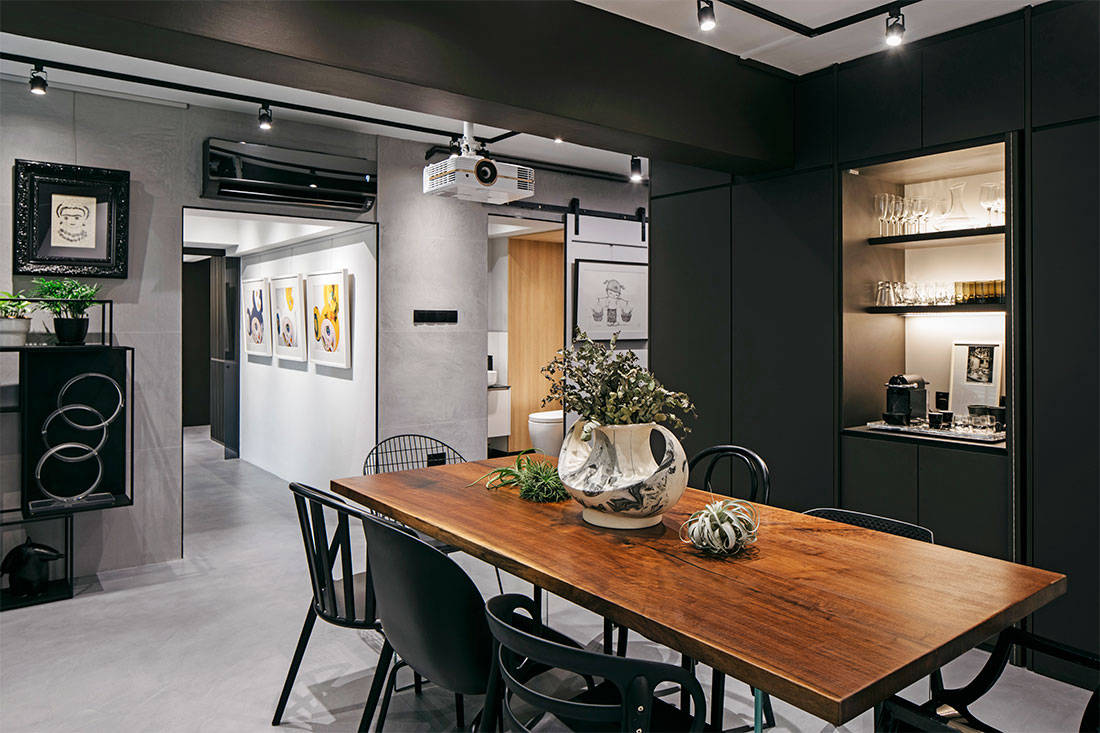 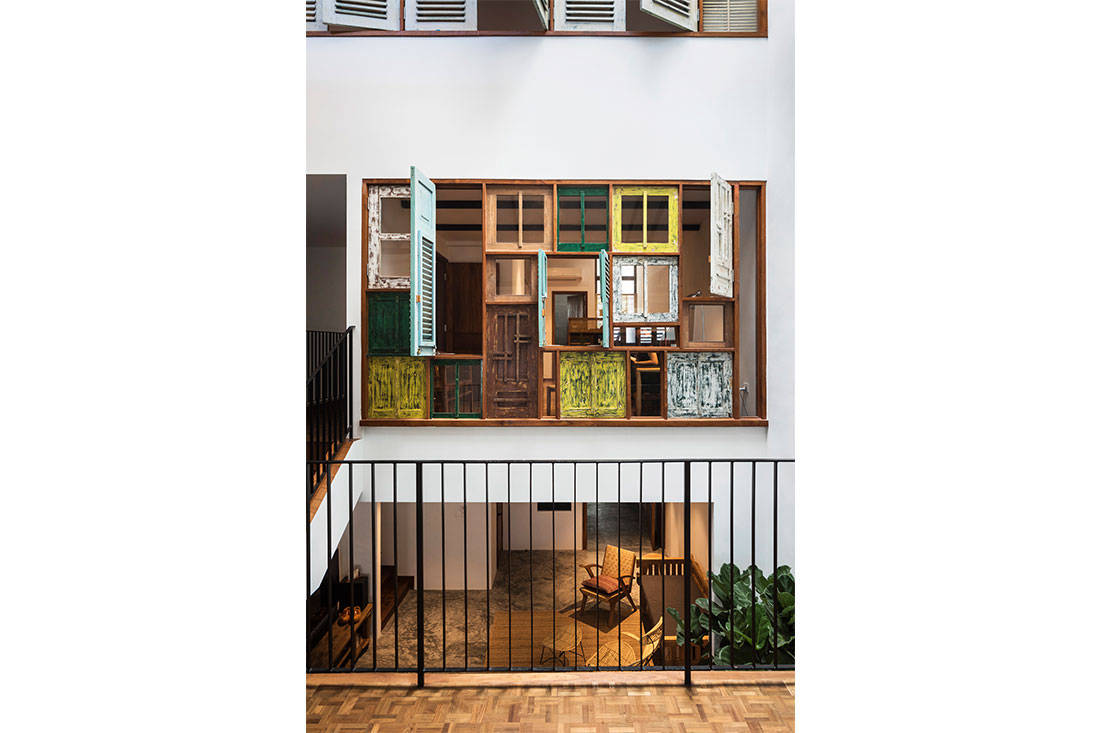 The homeowner, who occupies this home with her parents, wanted a studio space for the pilates classes she conducts pro bono for those with mobility issues. The home also had to be spacious enough to hold both intimate and large gatherings, including the community meetings hosted by her father, who is involved with the yellow ribbon project. The tropical kampong house was the inspiration for this project, where the goal was to create a home with an easy-going spirit, with different pockets of space to rest, play and communicate. The designers have blurred line between external and internal spaces through the use of skylights and air wells. Given the client’s interest in up-cycling and appreciation for antique Javanese timber doors and windows, the designers have restored said designs and incorporated them into the house. 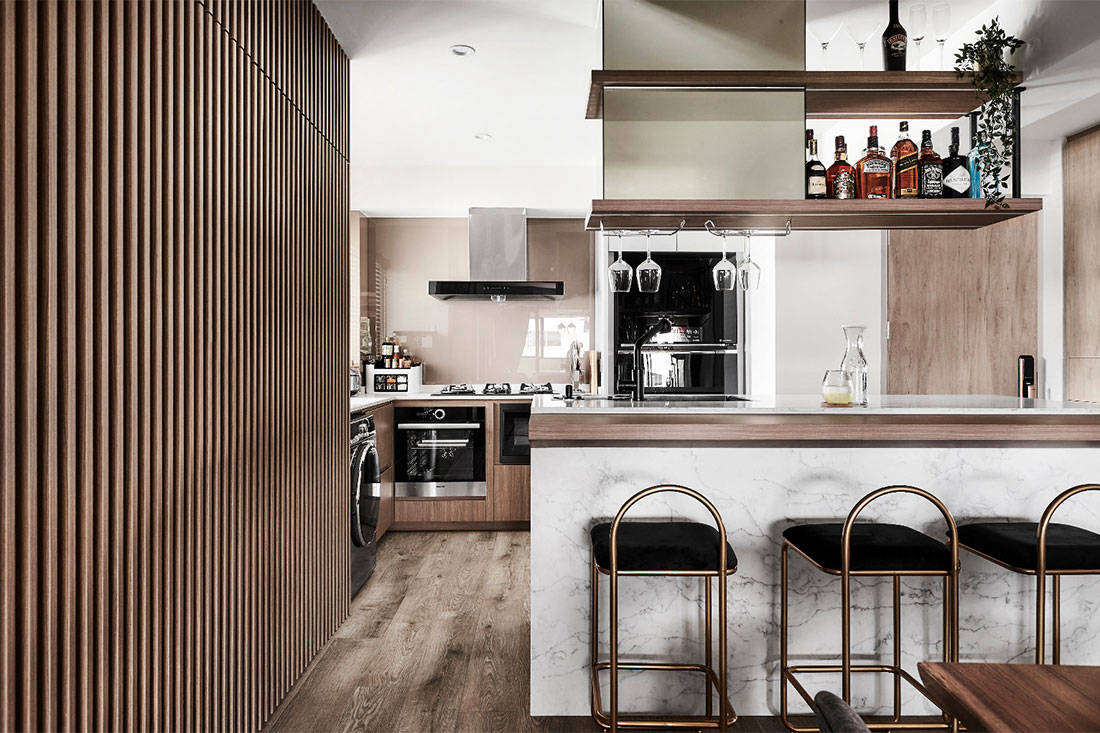 The owners of this flat did not want their home to look like a typical HDB. They also liked the idea of having a leisure-like dwelling for larger gatherings, and a green space for plants. The designers’ solution was to remove the wall separating the living room and make-up room, and inserting a concealed bi-fold door wall so that it can be closed or opened for different occasions. A concealed door keeps the master bedroom ‘hidden away’ from the living room, and creates a seamless wall feature in the hosting area. In this home, nature is reinterpreted through the use of materials such as terrazzo tiles, oxidised slate panels, timber trellis and panels, and marble quartz. A green wall in the balcony also brings the outdoors in. 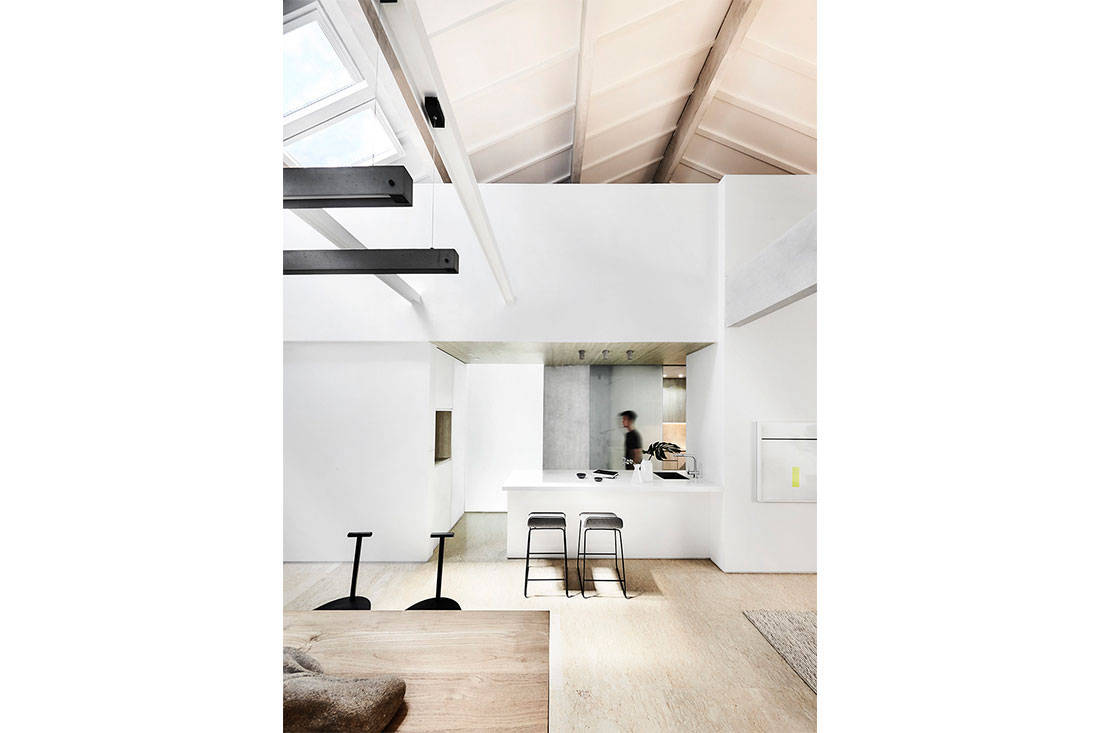 The owners had lived in this apartment for some years, before going overseas for work. Upon returning, and now with two kids, they wanted their two-bedroom home to be turned into three-bedder, and with a helper’s room. Having undergone a 180 transformation, the apartment is now bright and pristine, with the exposed, pitch-roofed shell utilised as a double volume space. The private spaces have been relegated to the extreme ends of the floorplate: the master bedroom and walk-in wardrobe at one end, and the two junior bedrooms and helper’s room at the other. The social spaces are positioned at the centre. The different spaces are consolidated into a “Box Loft”, an undulating and multifunctional spatial volume, and the top of the box structure has been made into an informal ‘attic’. 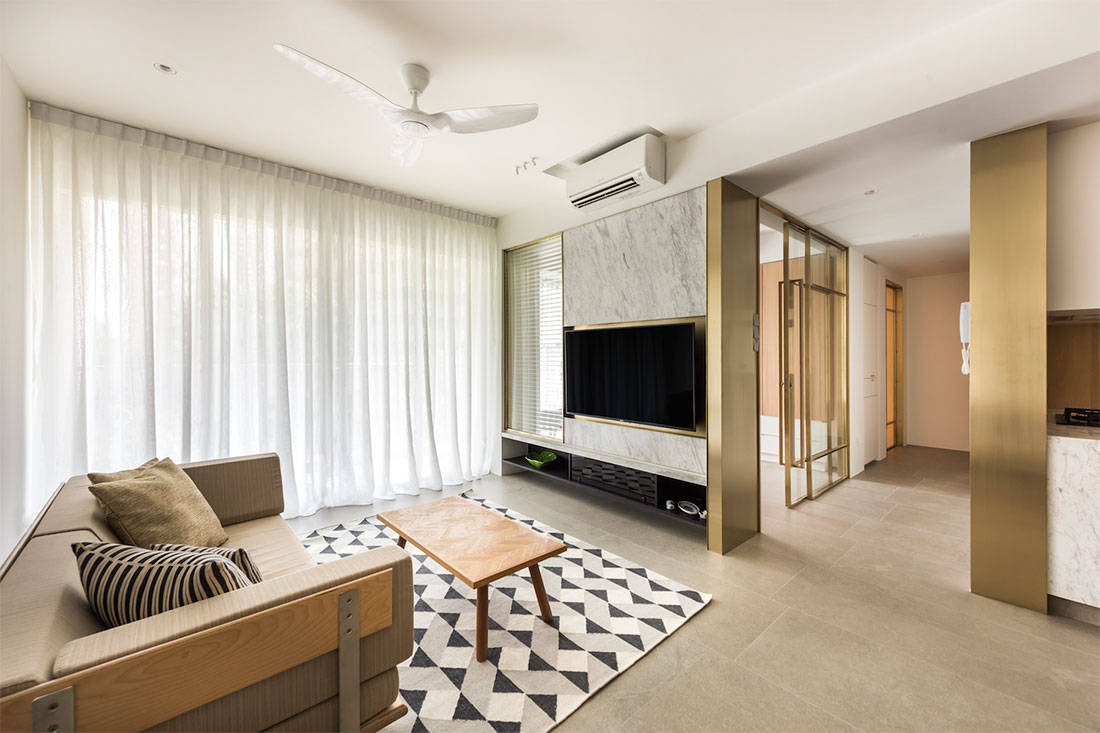 The owner desired a sense of spaciousness, lots of storage space, a private study area, enclosed altars and a guest room for her niece who visits occasionally. As a response, the designer removed existing walls, and had glass walls and doors put in place to improve light and air circulation throughout the apartment. A customised structure composed of marble, glass, brass and wood veneer serves as a divider between the living area and guest bedroom/library. The space-saving fixture functions as TV console on one side and a library and altar on the other side. The consistent use of a neutral material palette with metallic accents throughout inject a sense of understated luxury.
See full home feature here