With careful planning, this 720-square-foot HDB flat is now fit for a young family who loves to entertain.

Despite the compact size of this three-room HDB flat in Yishun, a couple with two school-going children decided to make the purchase for its proximity to their parents’ and relatives’ homes, as well as amenities such as the market and MRT station.

“My wife and I were concerned about the space though. The unit is rather small, and we toyed around with the possibility of making it more spacious,” says the husband.

The couple enlisted interior designer Eric Chua of Sync Interior, who quickly recognised the potential of the space. This being a fairly old unit, the internal walls, including the storeroom between the living area and kitchen, could be demolished. Removing as much of the internal walls as possible would allow Eric to incorporate the storage space, bright atmosphere and natural ventilation that the homeowners wanted. 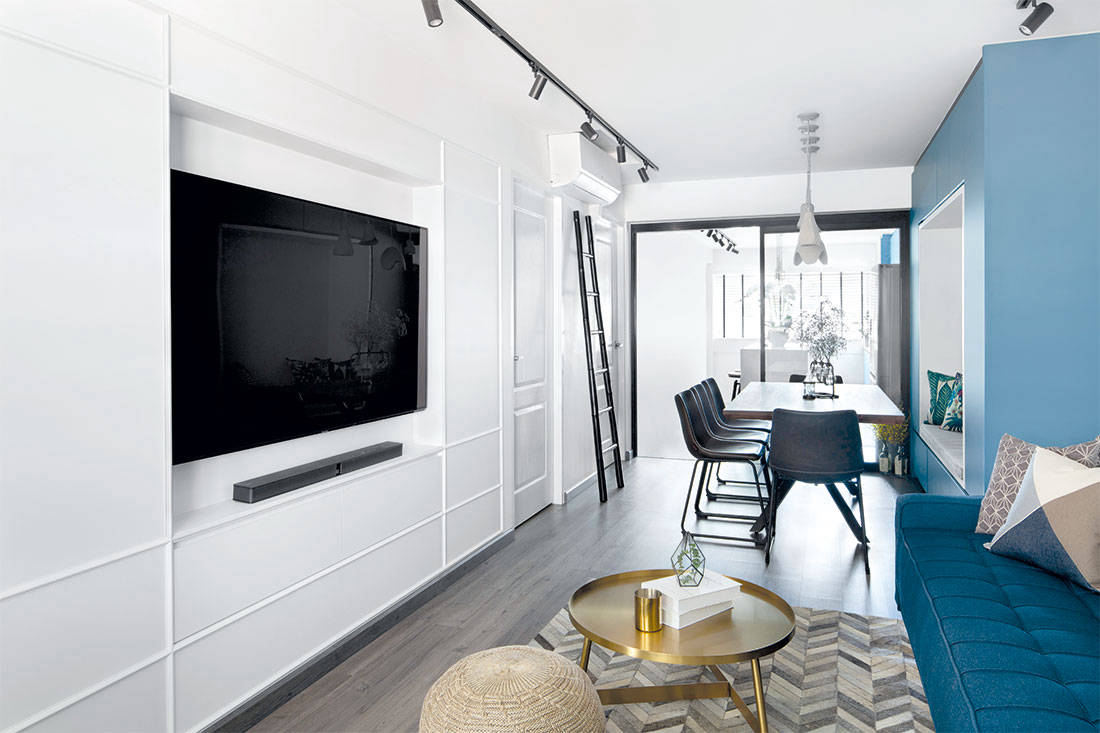 In a renovation that took two months, Eric overhauled the interiors, and this included combining the two bathrooms into a single, larger one. In addition to drawing inspiration from Scandinavian design, Eric also used white, brown and blue finishes to give the interior its breezy feel. 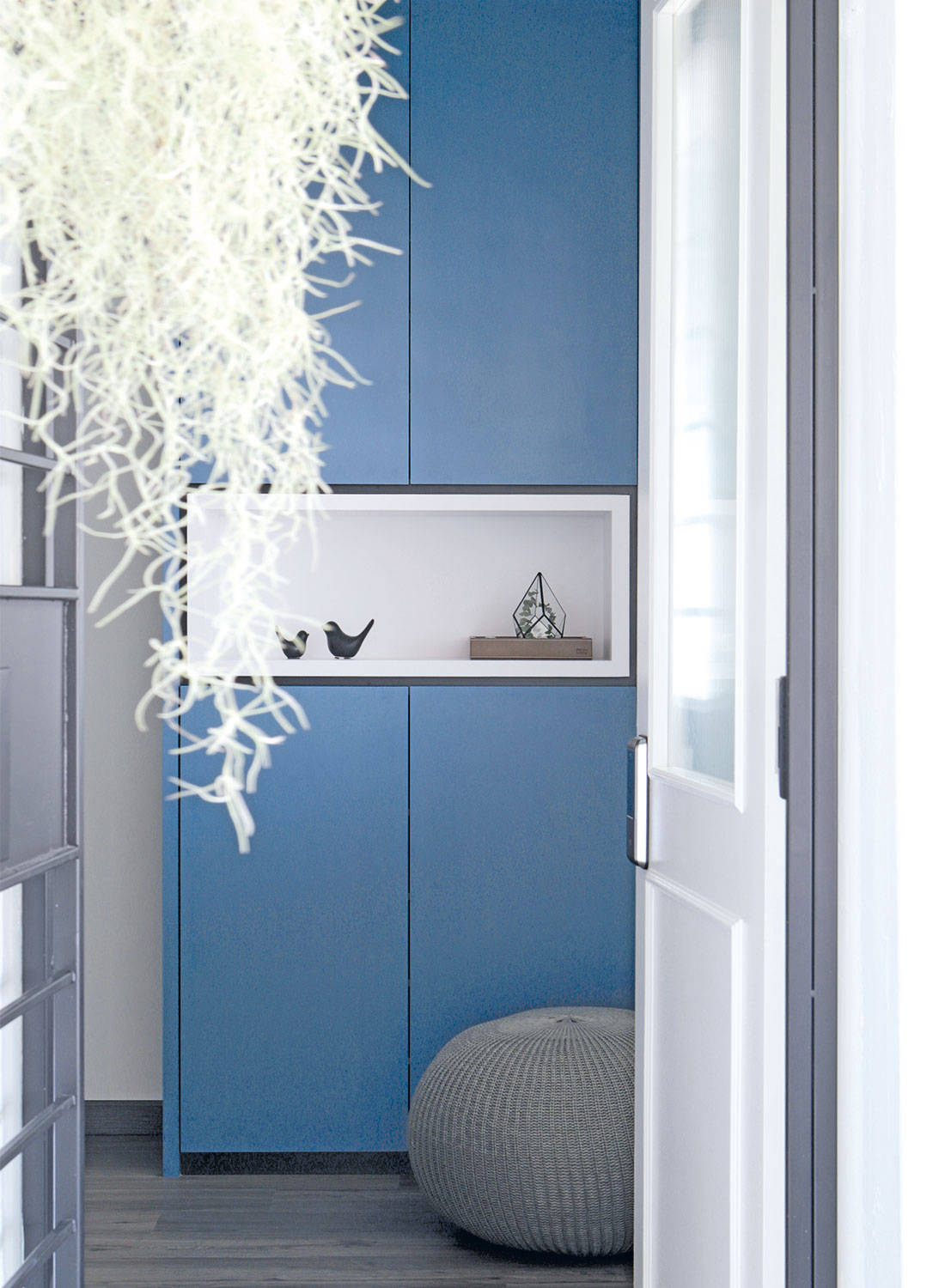 Although a full-height cabinet is the first thing one sees upon approaching the flat, the main entrance opens directly into the living area where a comfy blue sofa takes centre stage. It faces the television area – jazzed up with subtle wood trims – where the white surface matches the bedroom doors. Keeping this entire side of the living area white lengthens the space visually. 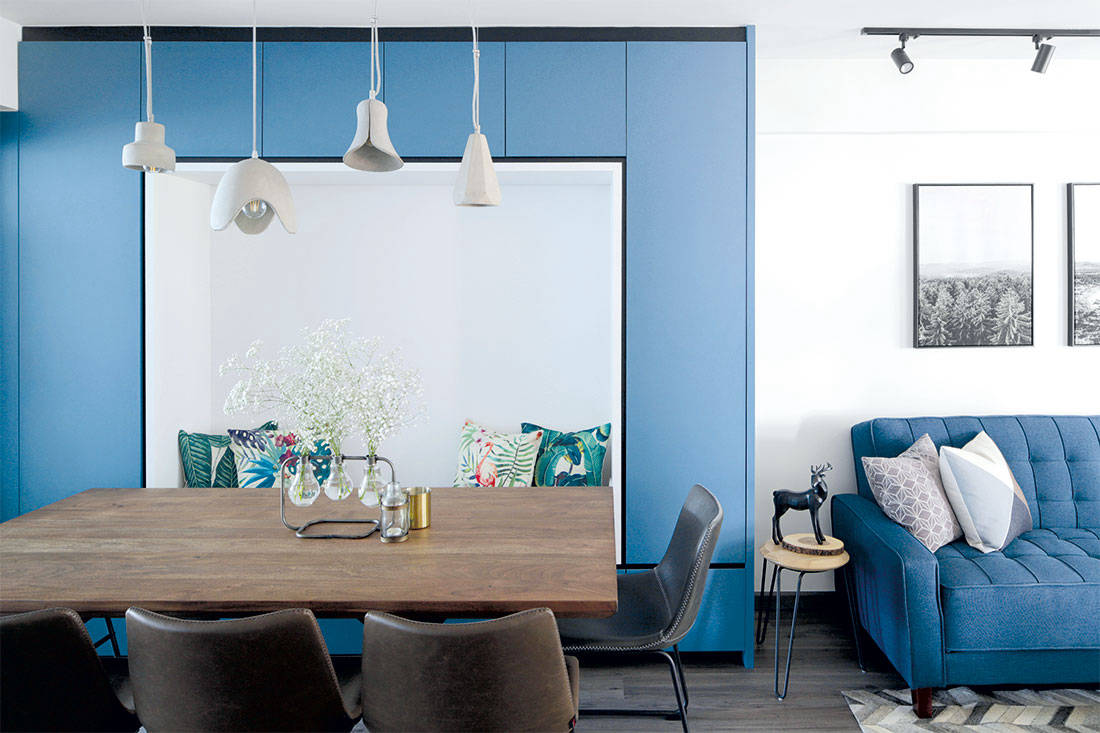 Living so close to family, the couple and their two children love having relatives and friends over on weekends, and needed a space where visitors could gather comfortably. Eric had the idea of including a large dining table and kitchen island in the flat, and this seemingly impossible task was achieved with some smart design manoeuvring.

“To conceive a space that could accommodate more seats in the dining area, I came up with the idea of banquette seating with cabinets wrapped around it for improved traffic flow and additional storage,” he shares. “The kitchen island, on the other hand, provides more space for food preparation and breakfast, and also compensates for the insufficient countertop space.” 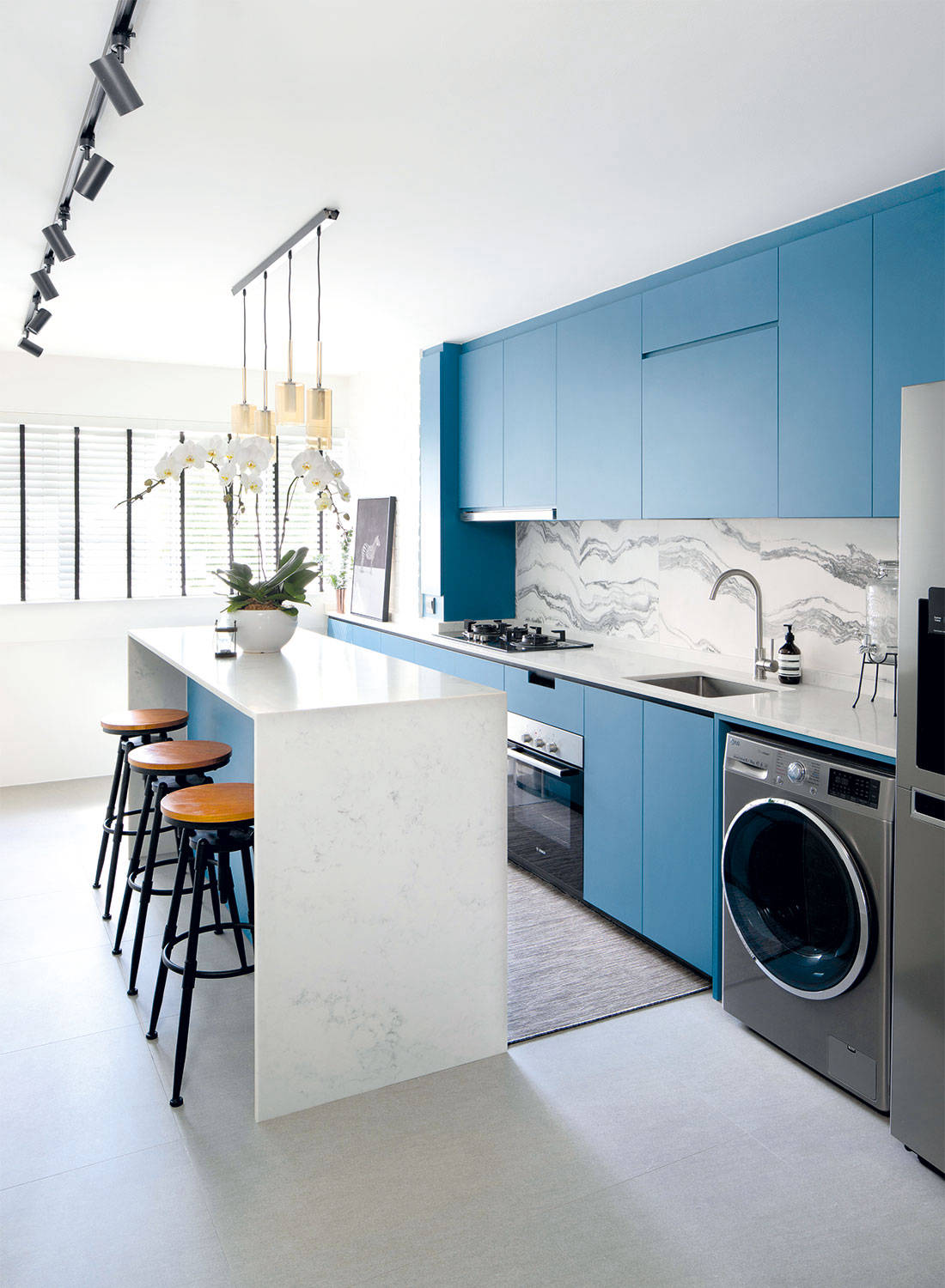 With the storeroom now gone, Eric has built a custom unit that incorporates a niche with seating. This frames the dining area and maximises space around the seat for storage. The dining area is surprisingly spacious despite housing an eight-seater dining table. In the kitchen, the island has enough space for bar stools. 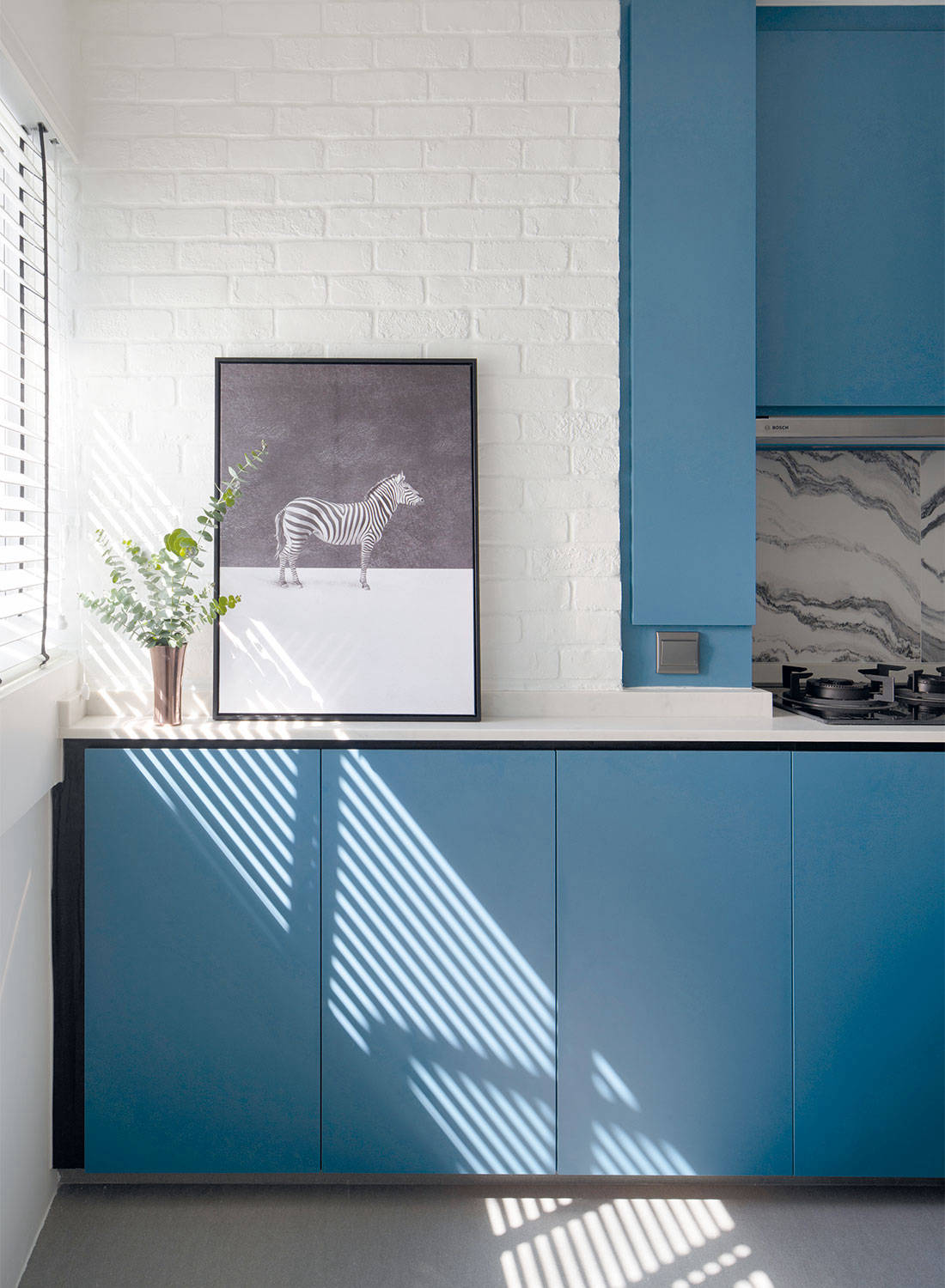 “When Eric first shared the idea of having a kitchen island, we questioned if there would be enough space to walk, but we were totally convinced upon seeing the outcome,” the homeowners share of their initial dilemma. 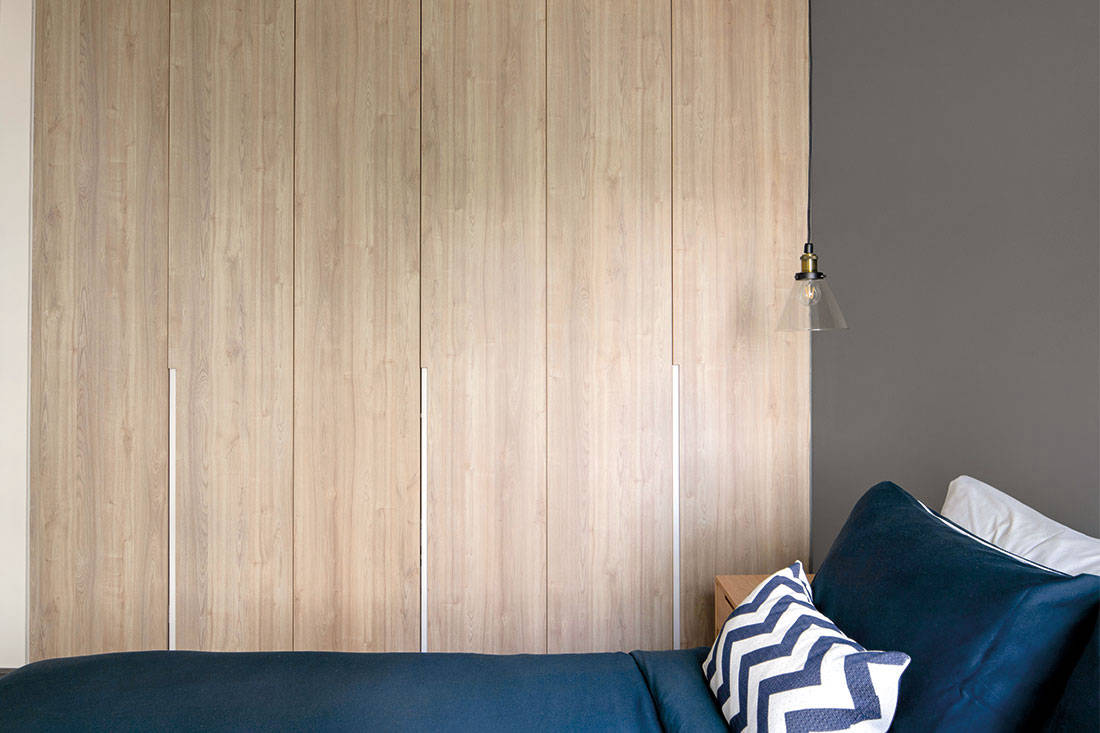 Like the shared areas, the bedrooms also incorporate a host of storage solutions for the family. The master bedroom is a cosy space that introduces the warmth of wood via the wardrobe doors and matching side tables. 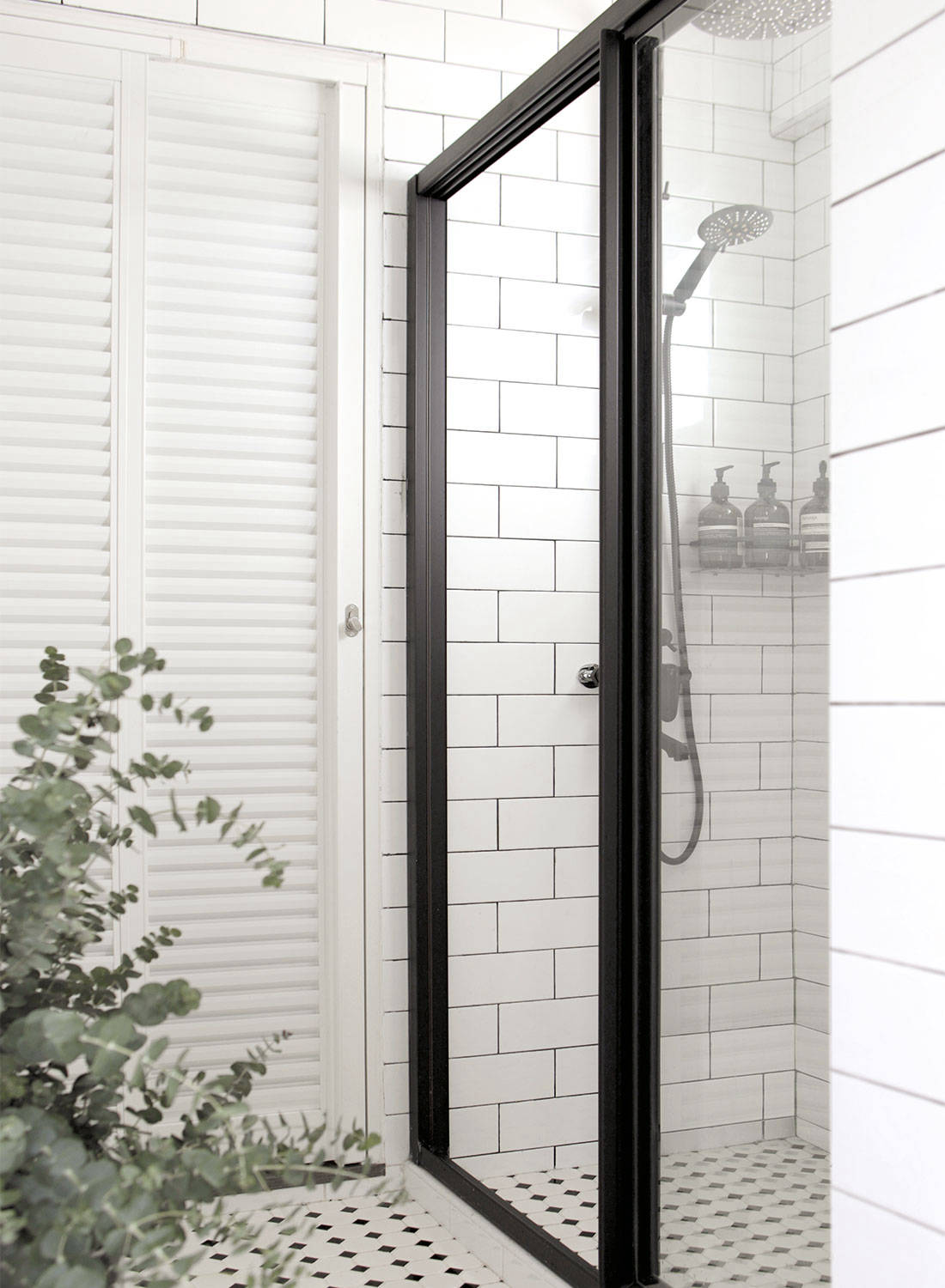 The children’s room, on the other hand, affords flexibility that is required for their young ages. Instead of conventional beds, Eric proposed the idea of a platform that houses storage. “The kids sleep on Japanese futons, which can be stored in the wardrobe or storage platform when not in use. The storage platform essentially functions both as a sleeping and play area,” Eric explains. 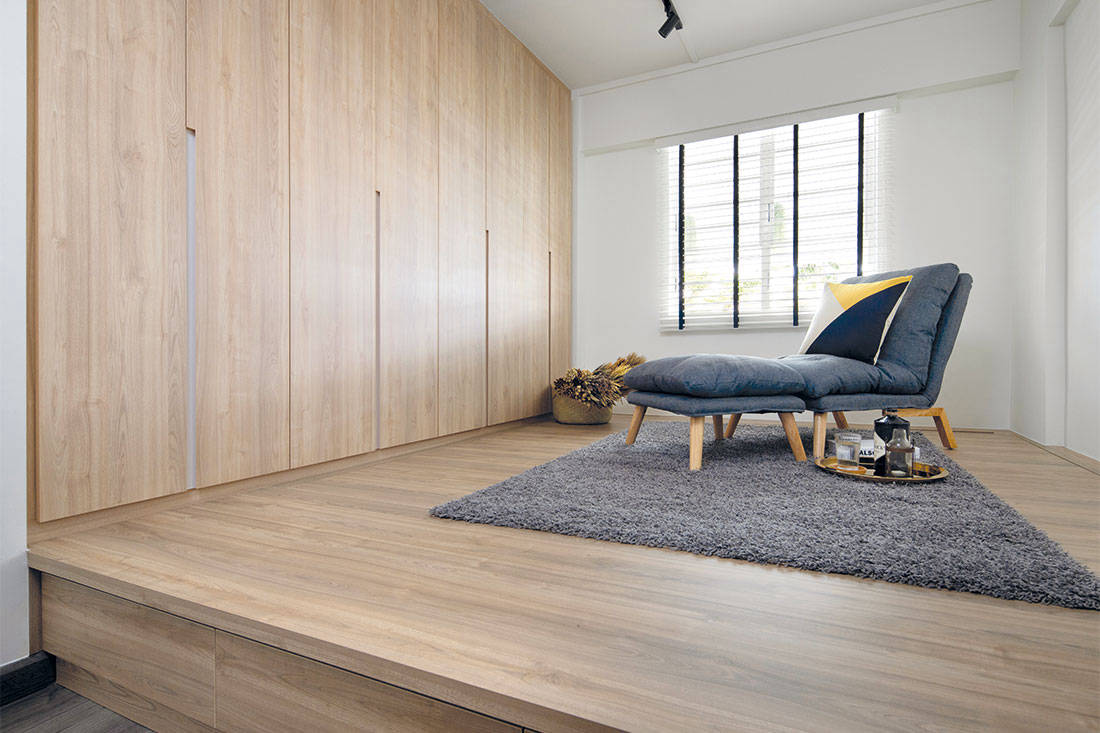 In all, the home is a perfect fit for the young family. It gives them room for movement with its open and spacious layout. Families with young children are often concerned about safety, and this layout allows the couple to observe and mind their kids even as they go about their tasks in the kitchen. “We didn’t expect the home to turn out so modern and spacious. Despite it being a small three-room unit, it ticks all the boxes in our wish list,” says the couple.