The home of OuterEdit co-founders is a manifestation of a harmonious fusion of individual ways, ideas and concepts.

When creativity is present in the home, life is more lighthearted, simple and just better. It encourages a unique sense of style; a way of living according to one’s own rules, drawn from one’s individualism. In the case of homeowners Ryan and Shermeen Tan, their home reflects their tastes, dreams and mindsets. 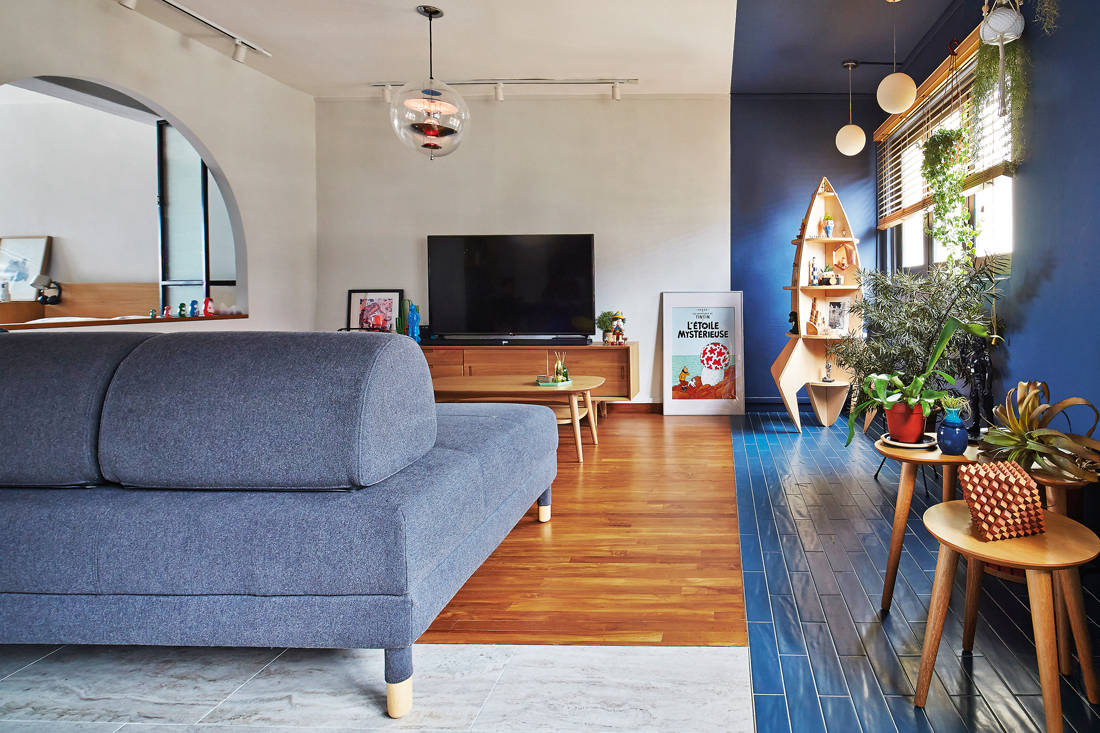 The couple, who run creative consultancy OuterEdit – which was behind the design of Lookbox Design Awards 2018 photo wall – knew from the start that they wanted a base that allows for a fusion of their different habits and preferences, where they can enjoy the process of growing together. Ryan and Shermeen worked with interior design firm three-d conceptwerke, to materialise their visions. 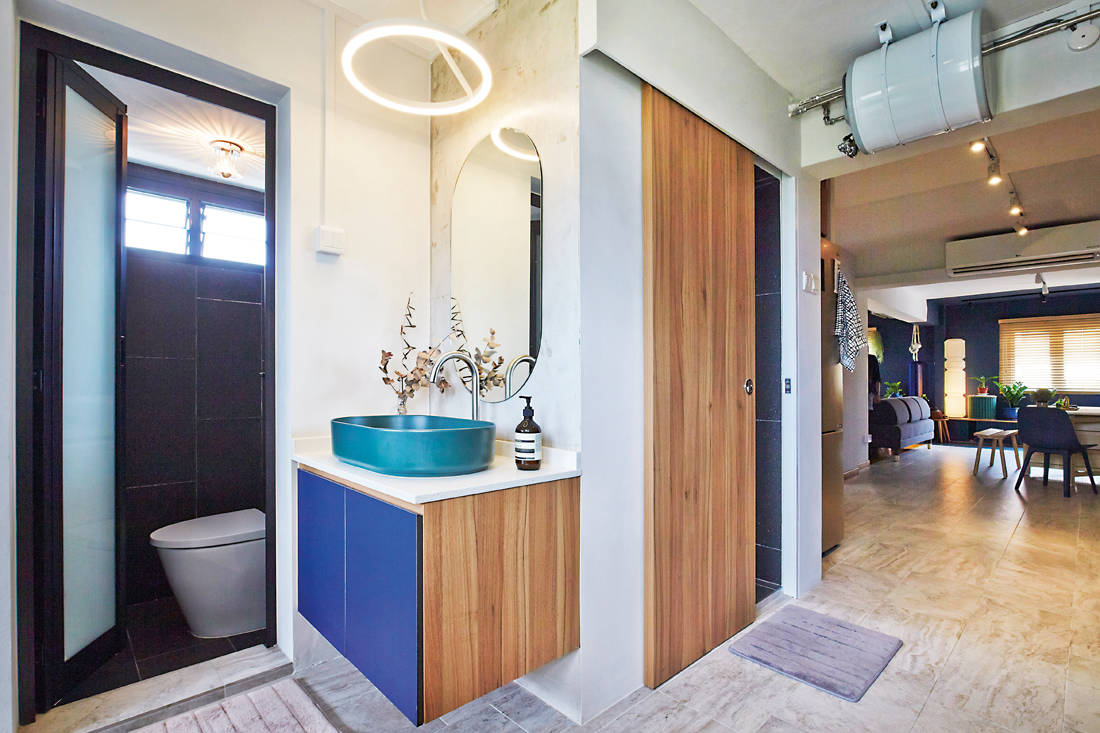 Upon entering the flat, an air of calm is sensed. A soothing palette of white and light wood tones is enhanced by washes of marine blue and forest green, through the decor and furnishings.

Plenty of plants, as well as quirky details further enliven the space. Ryan shares that he had initially put together a mood board to collate what the couple wanted in terms of their home’s look and spatial requirements. 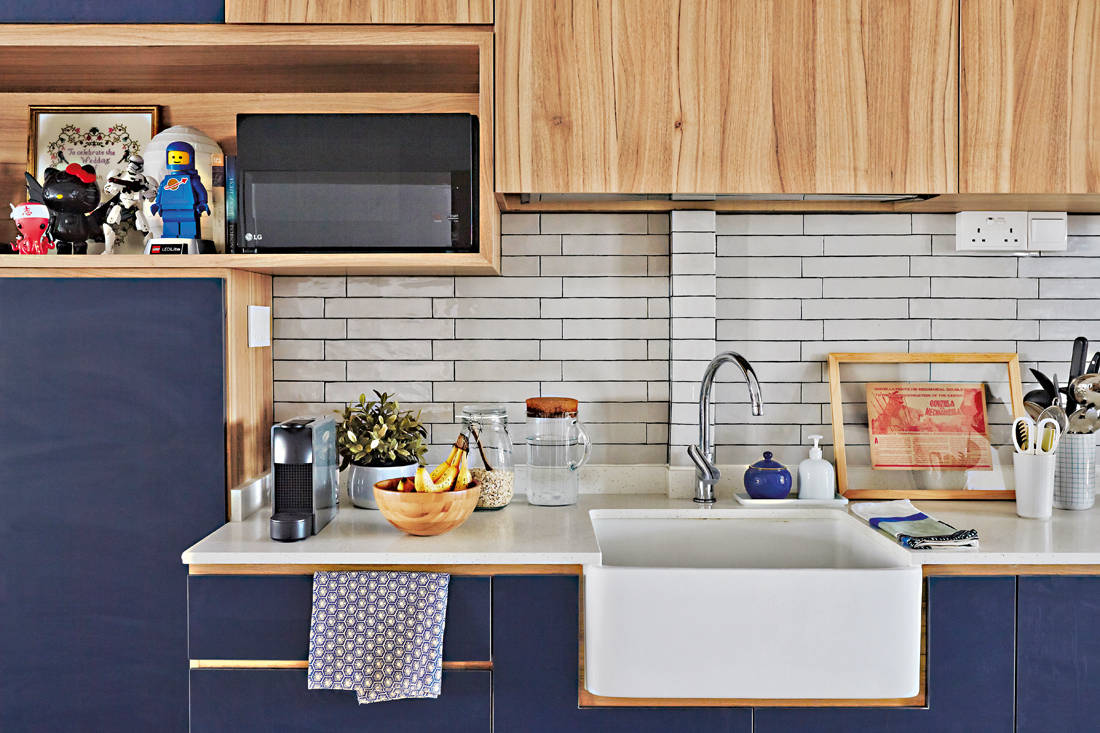 While Ryan is fascinated with outer space, Shermeen adores plants. This saw them coining the term, ‘Astro-Botanica’, which would guide them thematically on their ideas for the flat’s design. One of the ways, say the couple, that this is translated is by the use of rich dark blues and lush greens – colours of the cosmos and earth. This is evident in the cabinetry of the open kitchen, finished with a deep blue laminate from Lamitak; as well as the green and grey ceramic sinks sourced from Italy, in the shower room and bathroom vanity area.

A counterbalance to the many house plants, there are also elements that reference space or have a futuristic feel, such as the Verner Panton Globe lamp (Ryan’s favourite fixture in the home) that grounds the living room and the Tom Dixon Melt pendant, made of reflective acrylic, that adorns a corner of the flat. 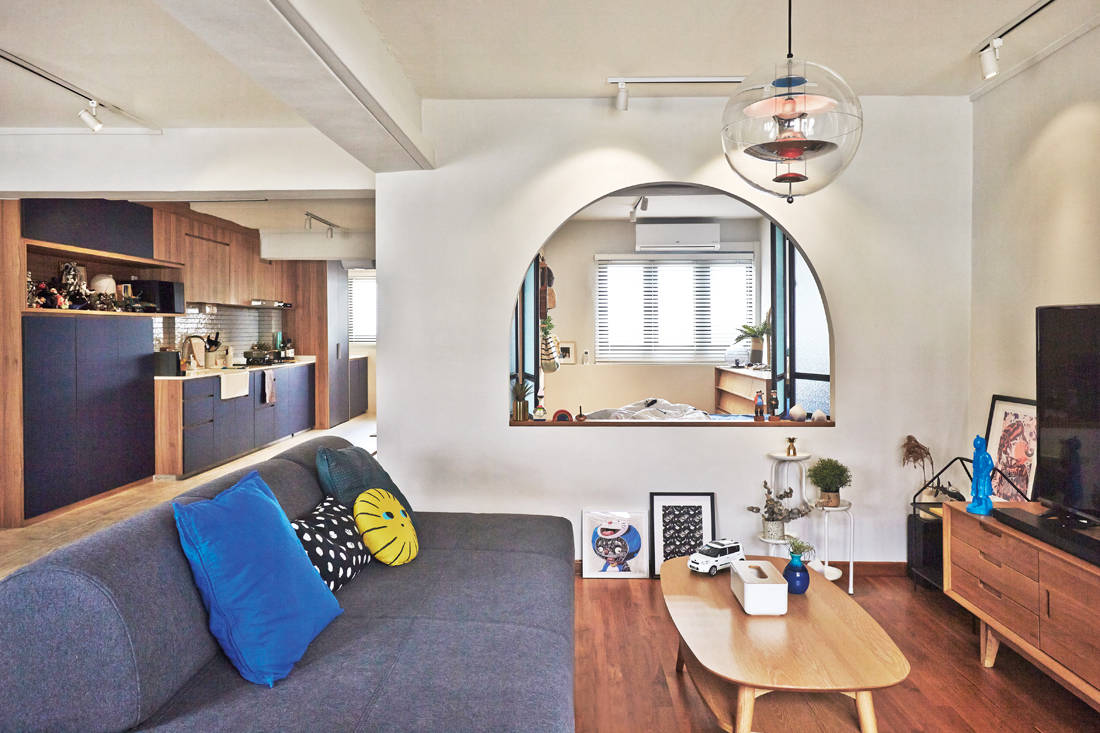 Shermeen shares that prior to deciding on this place, they had looked at other flats in Clementi and Tiong Bahru. This flat, which is over 40 years old, has a longish configuration, so the design team at three-d conceptwerke created an open and airy layout by making strategic alterations to the structure.

They knocked down walls of the bedroom at the front of the flat, to make way for a bigger living area. “Instead of walls, we used coloured tiles and paint to delineate and frame spaces within the home,” say the designers. They also created an arched interior window within the wall that separates the living area and the master bedroom. Apart from giving the home a fun touch, it lets more light into the bedroom, giving a greater sense of openness. 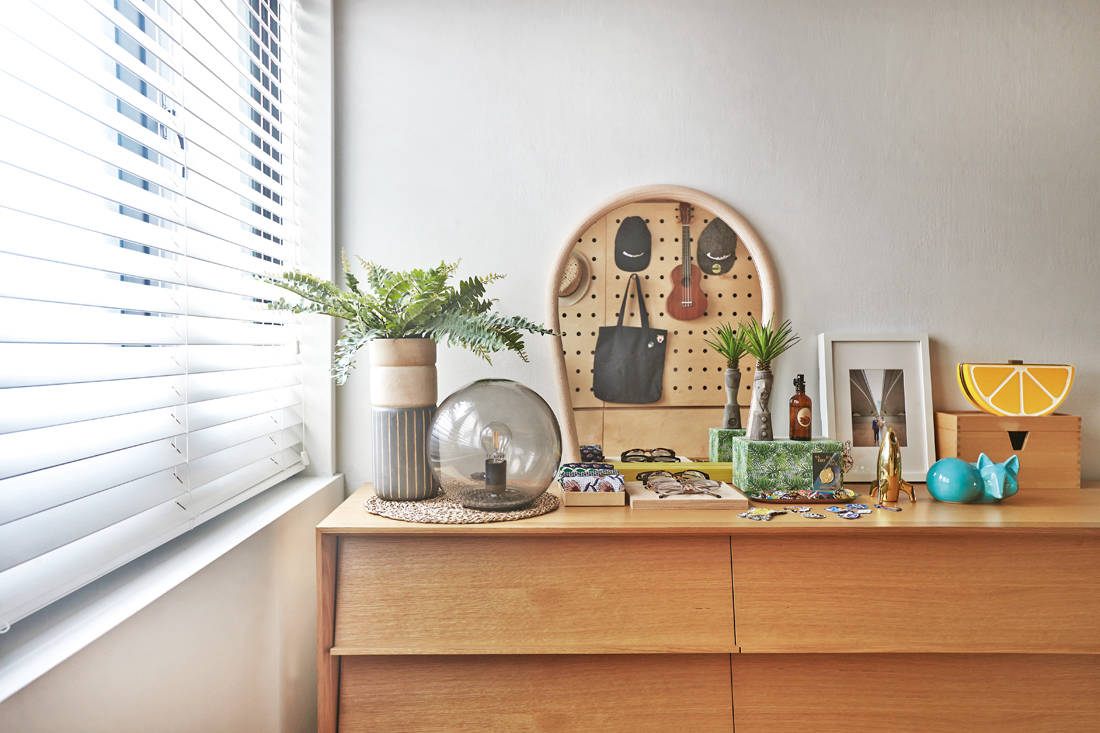 Other practical aspects were taken into consideration, too. “We knew that this is a small flat and wanted to make sure that every space can be multifunctional,” say the couple. Thus, Ryan and Shermeen requested that their designers keep built-in structures to a minimum, with everything else being freestanding and ‘transformable’. Even then, the built-in wardrobe is thoughtfully designed, with the couple conceptualising a birch ply pegboard-style front panel that allows them to change the display of their hats and other accessories as they fancy. 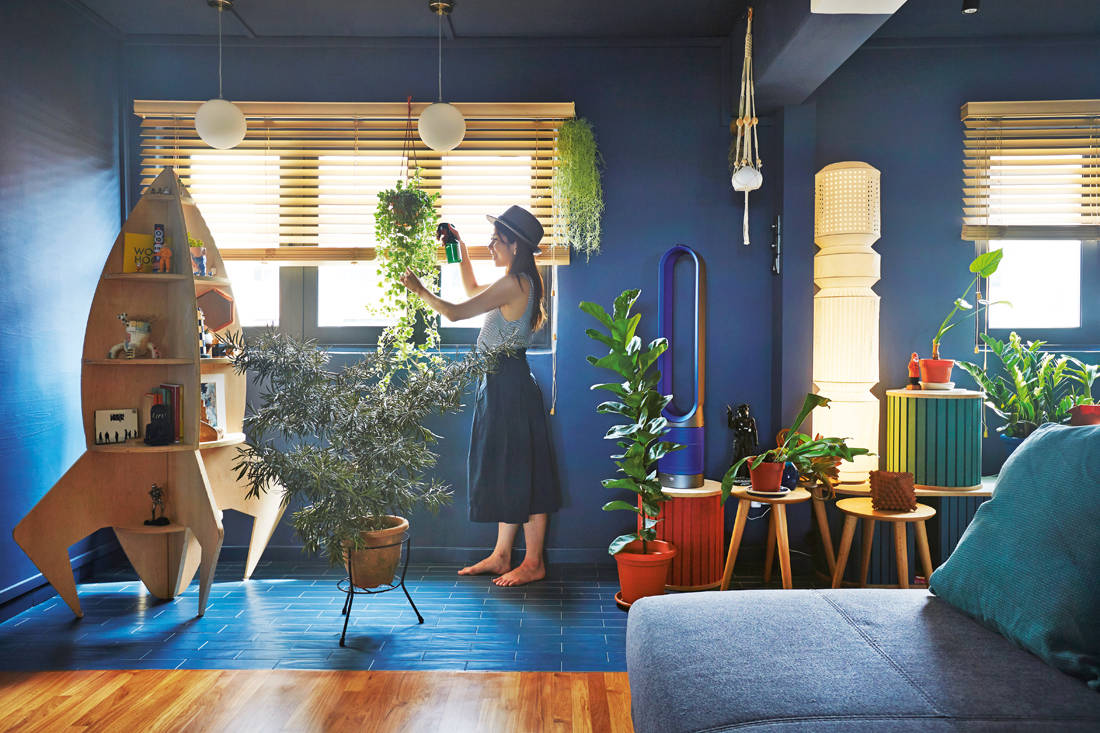 As part of the ‘growing together’ process, the couple has layered into the interiors personal items to make the space their own. The rocket shelving they had designed themselves doubles as a decorative sculpture in the front of the living room. It was specially made for their wedding; an interactive installation that family and friends decorated personalised messages. 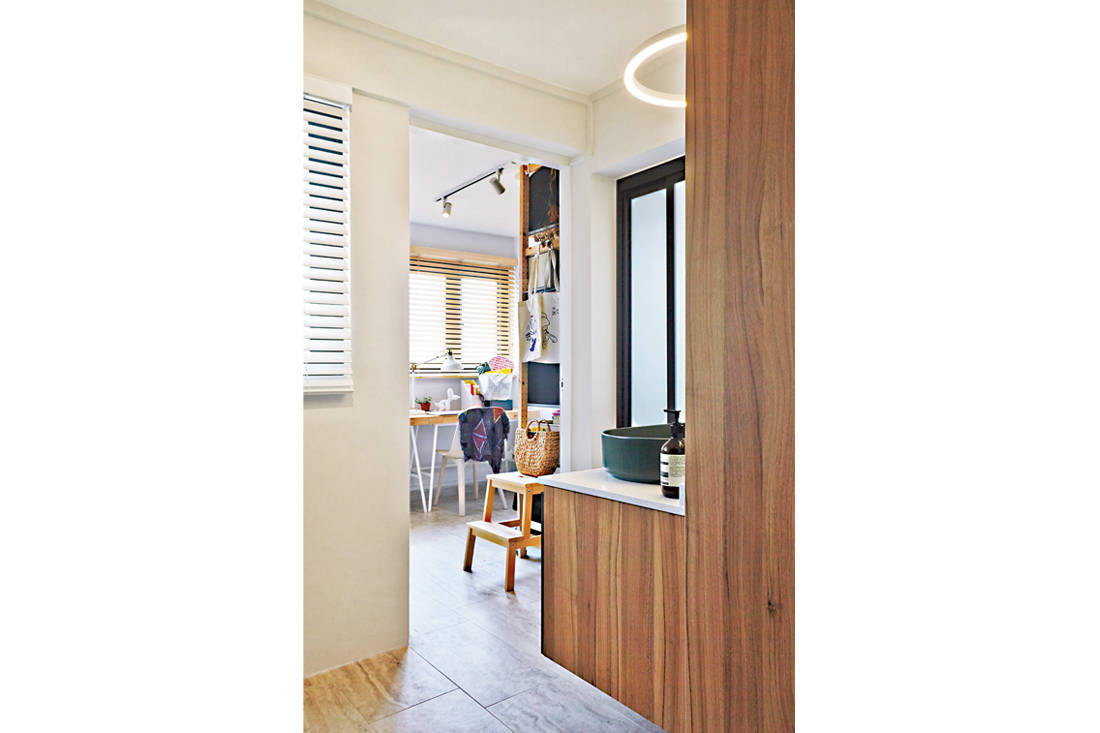 Even though the home already exudes a lived-in comfort, it is not entirely complete and never will be, as intended. “Our home is a space that didn’t need to be perfect from the start, but rather something that just keeps growing with us over time,” says Ryan. This way, “we come home each day to something that makes us happier.”