A flexible HDB flat that exhibits a theatrical quality

Metaphor Studio manipulated the layout of this Pinnacle@Duxton resale flat as a stage for a couple to live out their best lives for many years to come.

Text by Vivian Teh

If you were to study Metaphor Studio’s breadth of work that spans over two decades, you would immediately note its use of dark hues with natural finishes, bold planes and rigorous lines. This resale HDB flat is no different with its use of lava stone veneer, laminated wood panelling and travertine wall cladding throughout, complemented with architectural lighting and angular forms on linear axes.

“In wanting an absolute change to their previous apartment interiors that bore a Scandinavian industrial aesthetic,” says creative director Stephen Goh of the owners’ brief, “and most importantly to convert the HDB flat into a one-bedroom studio in favour of more open space, sensible reprogramming of spaces had to be regarded.”

With the removal of almost all of its interior walls, the flat no doubt appeared larger than its floor size – like the interiors of a landed property even. But the innovative spatial compositions are what ultimately contributed to the expansiveness. 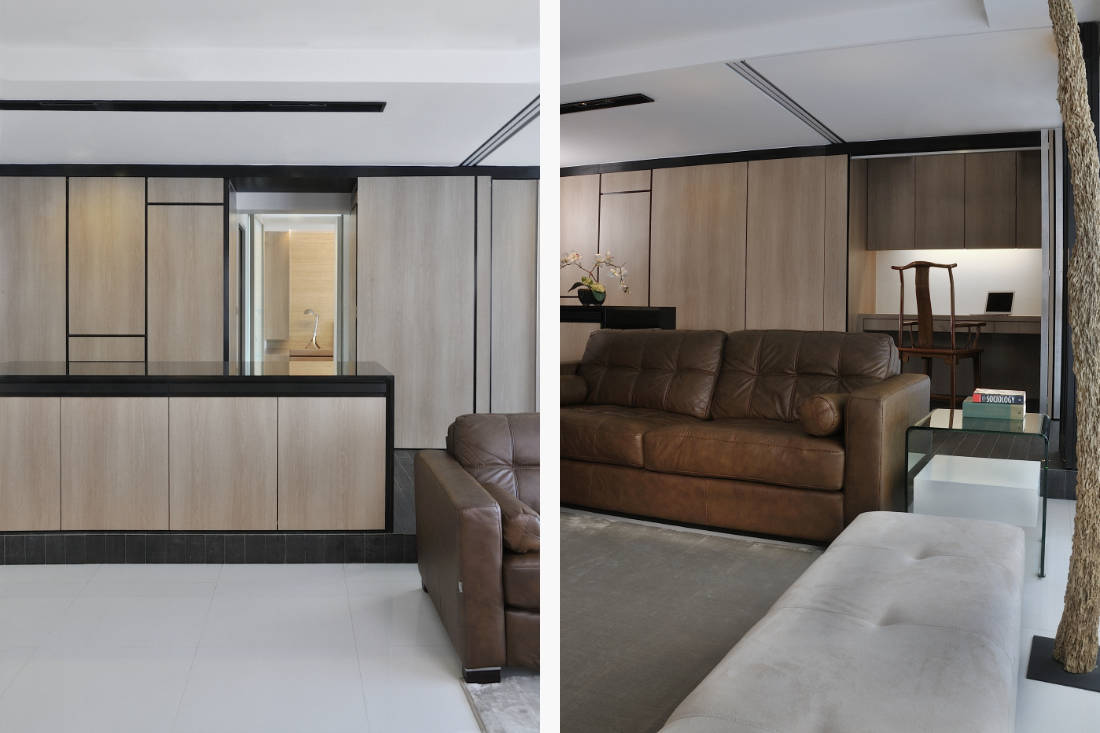 The most significant design element is a singular linear plane of wall panelling that acts as a portal between the public and private realms. While it imparts a grandeur backdrop for the public sanctuary, the panelling’s minimalist aesthetic belies its complex built and function. This custom feature has to be everything and nothing; it camouflages the study, laundry, dry kitchen, bedroom door and storage cabinet effectively. 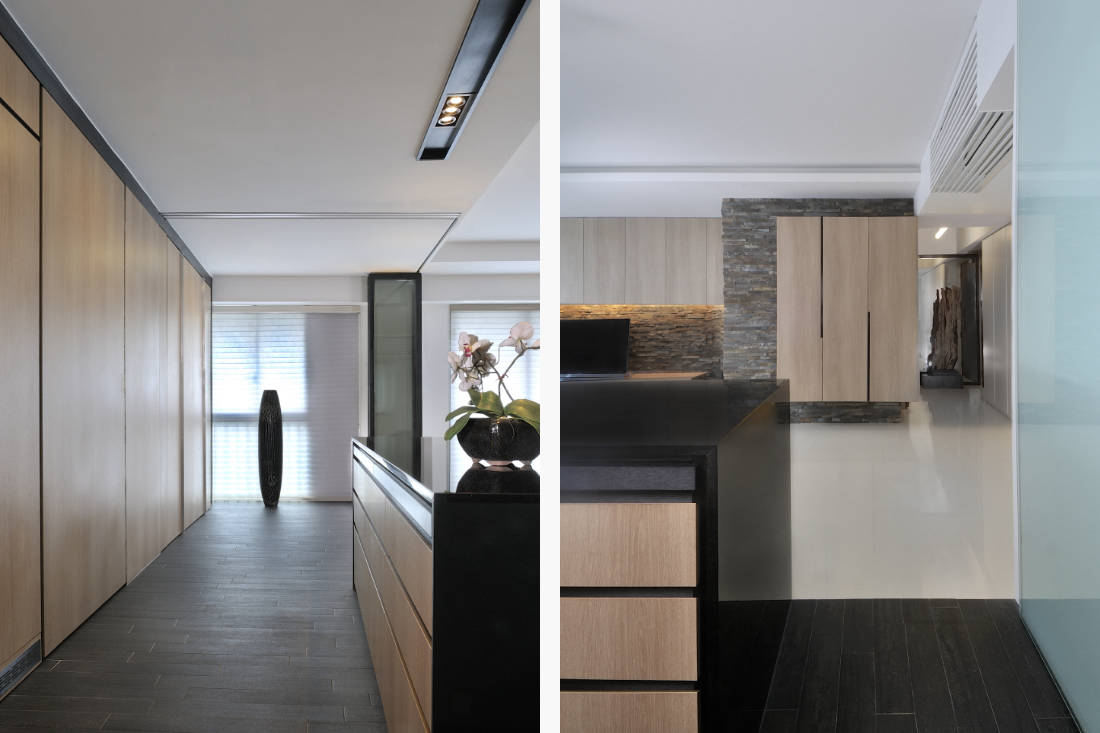 Fronting the panelling is a new island counter erected on a linear raised platform like a stage, which Stephen puts it simply “as the hearth of the flat.” It is one of the most used areas of the home and also “where the couple often have a quick meal thanks to a pull-out countertop from the island,” he adds. 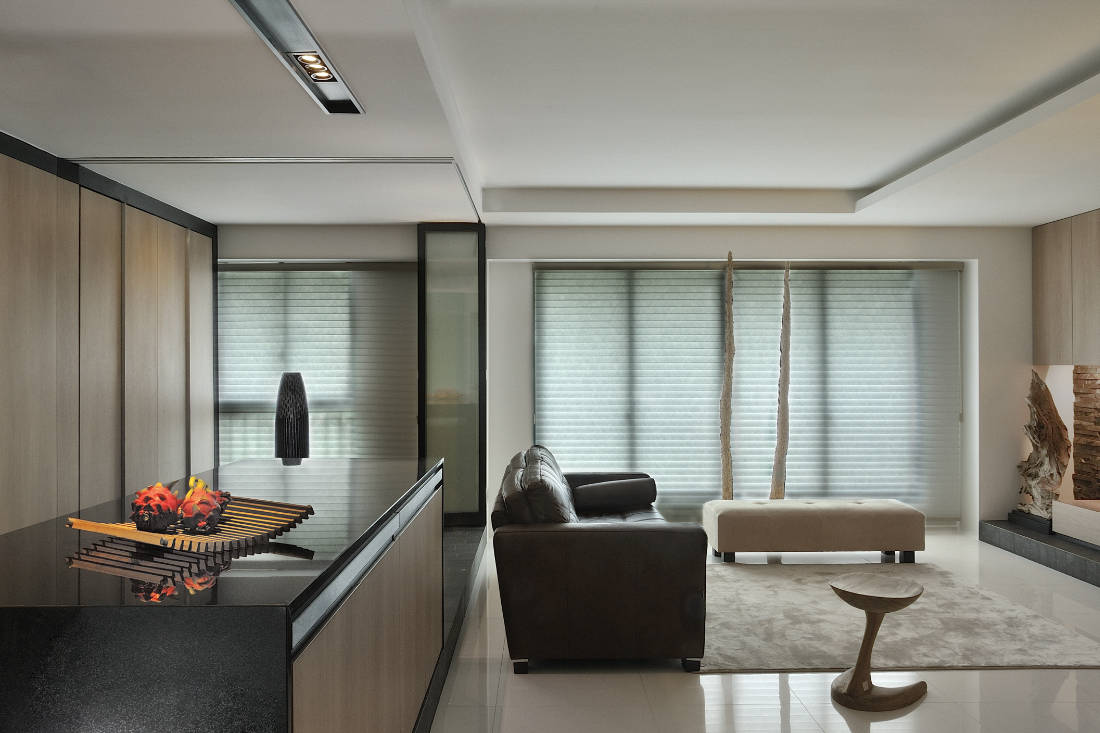 Both the wife, a teacher, and the husband, a banker, share the convertible study. When privacy calls or the need for video conference arises, the pocketed aluminium sliding glass doors that nest within the raised platform create a temporary restricted boundary. This emergence of a multifunctional space could also easily be converted into a modest guest room for overnight guests if required. 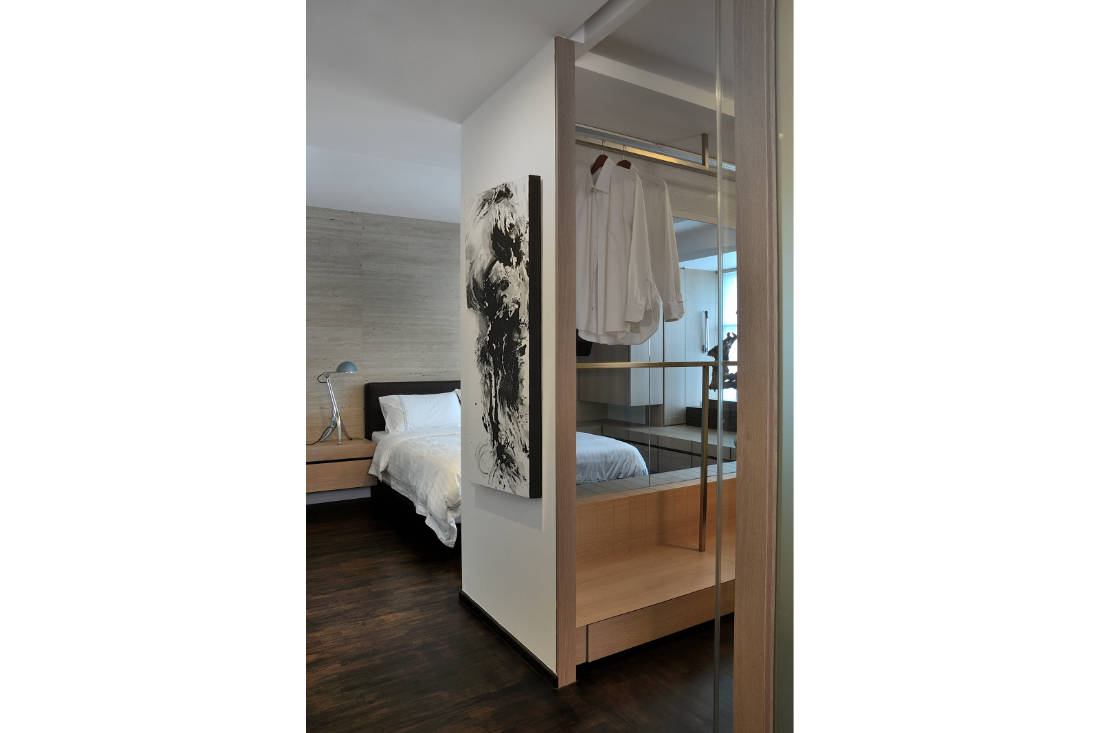 In contrast, the sole bedroom in the flat is spacious with an equally generous walk-in wardrobe to boot. This was made possible by combining two bedrooms into one. To achieve the look of a capacious hotel suite, fixed glass windows between the two zones expand the visual boundary further. 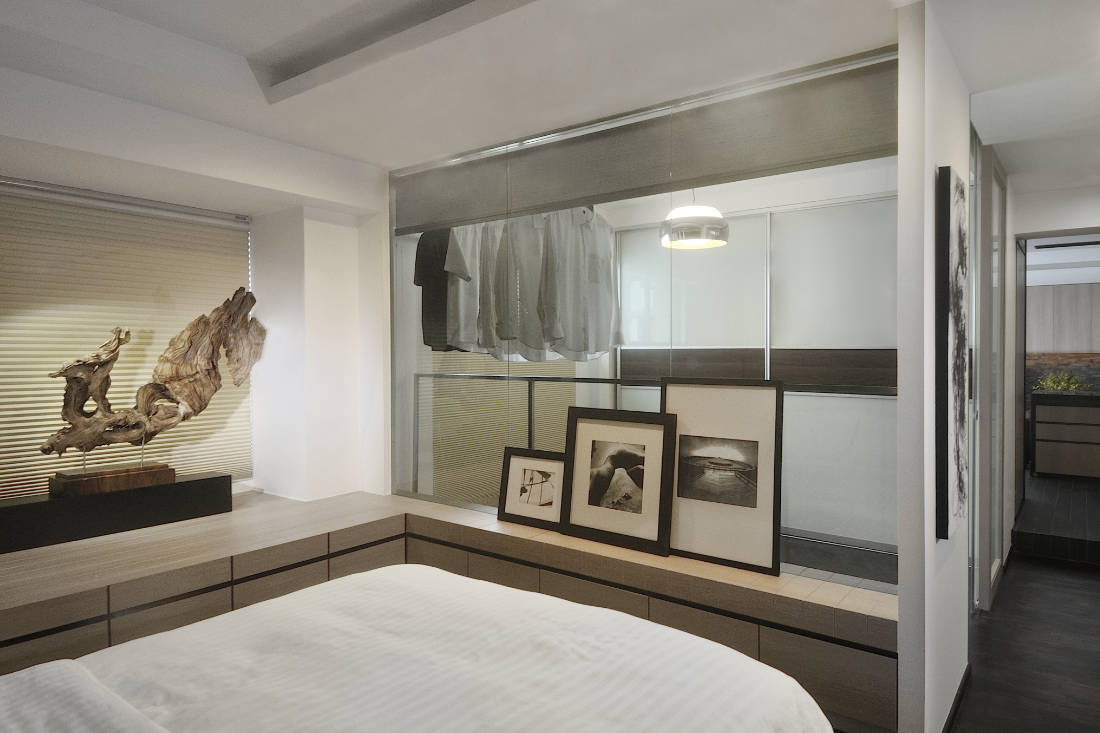 Stephen also capitalised on the existing bay window by increasing its depth for additional storage at the bottom. This design strategy “created a wider cosy corner good enough for a lazy nap during the weekend or as a reading nook,” he suggests.

From the stage-like elevated platform to the curtain-esque wall panelling that conceals the goings-on of the ‘backstage’ – or rather the bedroom – subtle nuances of a theatre are apparent when examined closely. Even with a floor area of over 1,000sqft for a couple to reside, the flexibility of space usually associated with tiny homes has been given great importance in this HDB flat. These elements ultimately resulted in an elegant and adaptable home.