A young couple resides in a condo with a loft where relevant, purposeful spaces allow them to relax, play, sleep or be entertained.

What do you do when you just got the keys to your new abode and relish the idea of personalising the entire space? A young couple’s joy of owning their very own condominium was the first dose of elation; the second one was transforming this space from ground zero. It meant they could add their ideas and inspiration from their travels or lifestyle pursuits. It was a daunting task because men and women have different ideas when it comes to spatial aesthetics and decoration.

Thankfully, Forefront Interior did not face an insurmountable wall. Instead, the couple gave the designers carte blanche to express a creative narrative to the space. The only two key requirements were to use a blue accent within an industrial element theme as the overarching design. 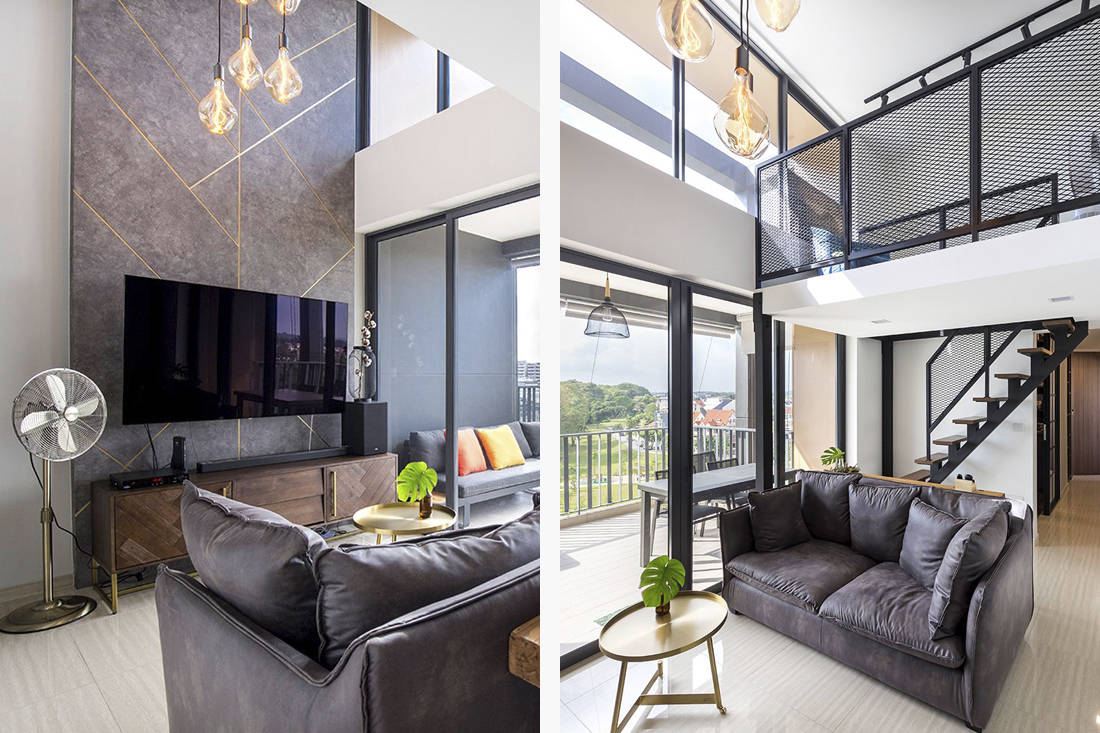 A welcoming open-plan living area is constantly flooded with natural light that streams in from the floor-to-ceiling windows located at the balcony area. Not only do the stairs behind the sofa serves the occupants’s needs to access the loft space, it also doubles as a design feature. The designers’ pairing of gold accents (as seen from the TV feature wall, coffee table, and standing fan) with black steel (as seen by the staircase and the loft’s grille divider) creates an industrial vibe that’s chic and understated.

The charming pendant lights dominate the space elegantly while providing a warm, welcoming glow, particularly in the evening. The couple love this space even in the morning where sunlight streams in from the top windowpanes located closer to the ceiling. This light-filled airy space makes it a joy relax, be it for reading newspapers or watching the TV. Views of the lush surrounds also help the couple relax and take things slow on weekends, or after a hectic day at work. 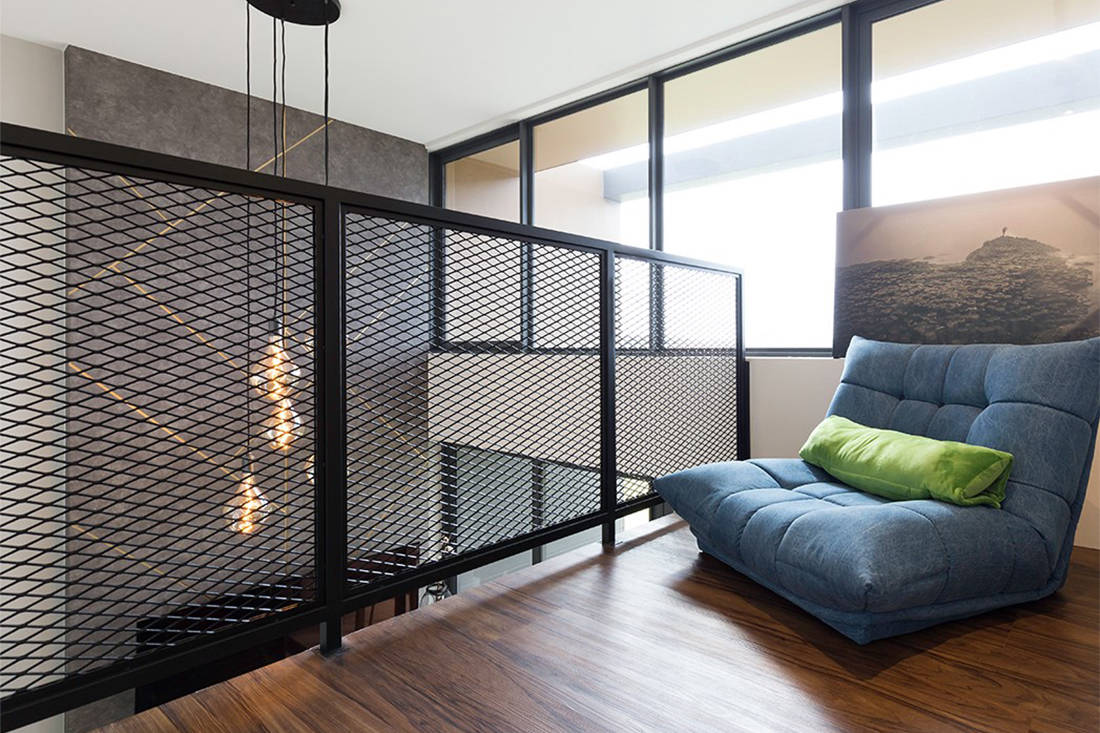 The second storey loft is the perfect place to curl up with a good book and get fully absorbed into it. The custom perforated metal grille for the loft adds an industrial touch to this space while gelling with the overarching theme. The vinyl flooring in this area is also used in the bedrooms. 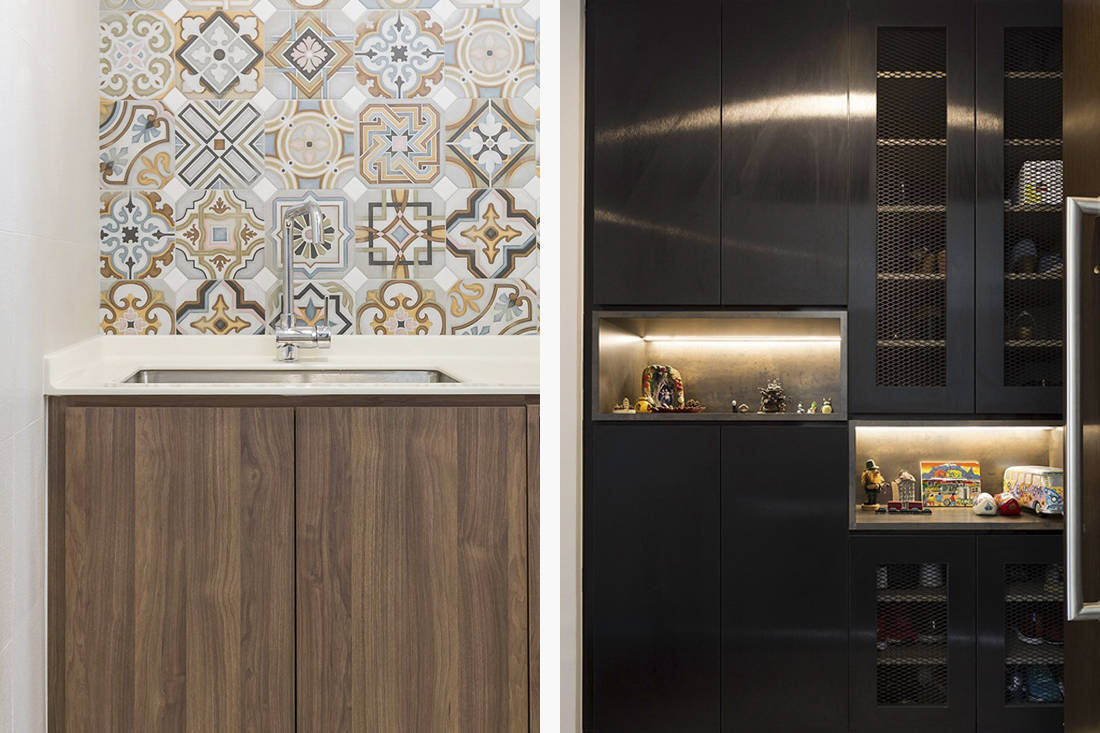 The industrial theme is particularly notable in the custom shoe rack made by local carpenters. The unique custom-made design with perforated door adds an interesting peek-a-boo touch to the couple’s taste in shoes.

When it came to the kitchen, the wife insisted on using Peranakan-inspired tiles because it alludes to Singapore’s heritage. Thus, they were used as backsplash, which lend a decorative effect to the space. The sink’s solid surface area ensured that clean-ups and useful, rigorous prep space allowed the homeowners to indulge in some personal time of their own – enjoying home cooking! 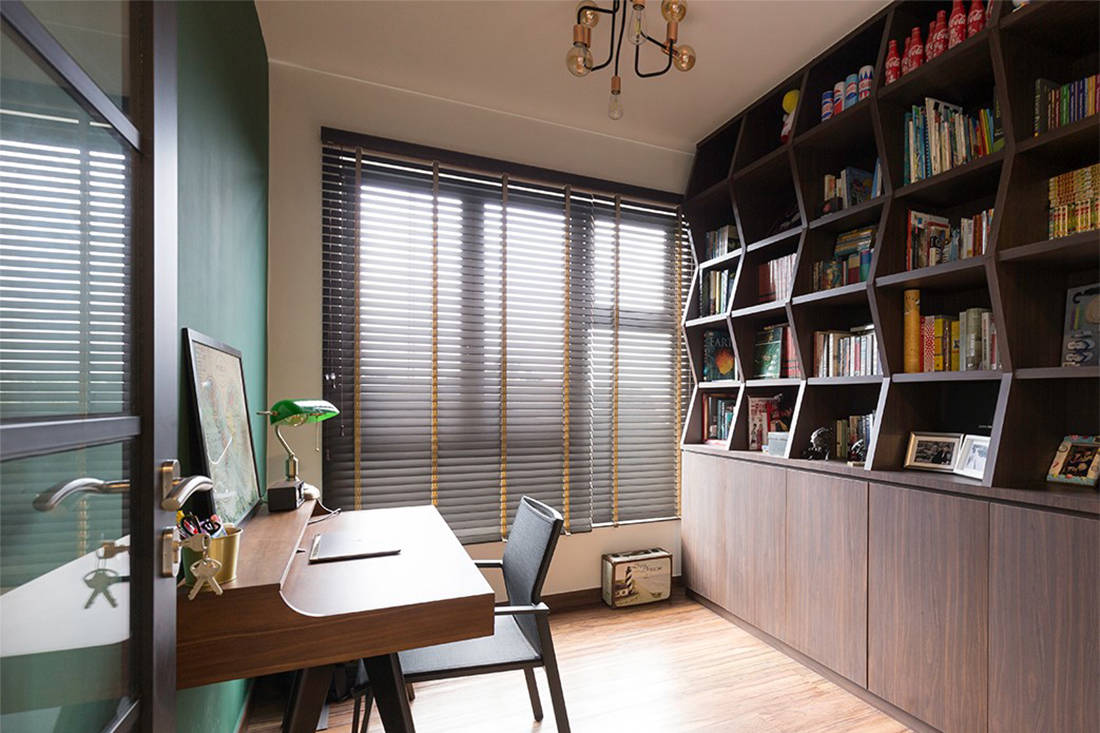 The deep leaf green wall pairs well with the wooden desk to create a sense of the outdoors. Yet, the unique feature here is the custom bookshelf with its unconventional jagged shelving, injecting a playful character to a serious space. Adding to that is an industrial pendant light that provides a warm glow from its Edison-like bulbs, creating a retro ambience. 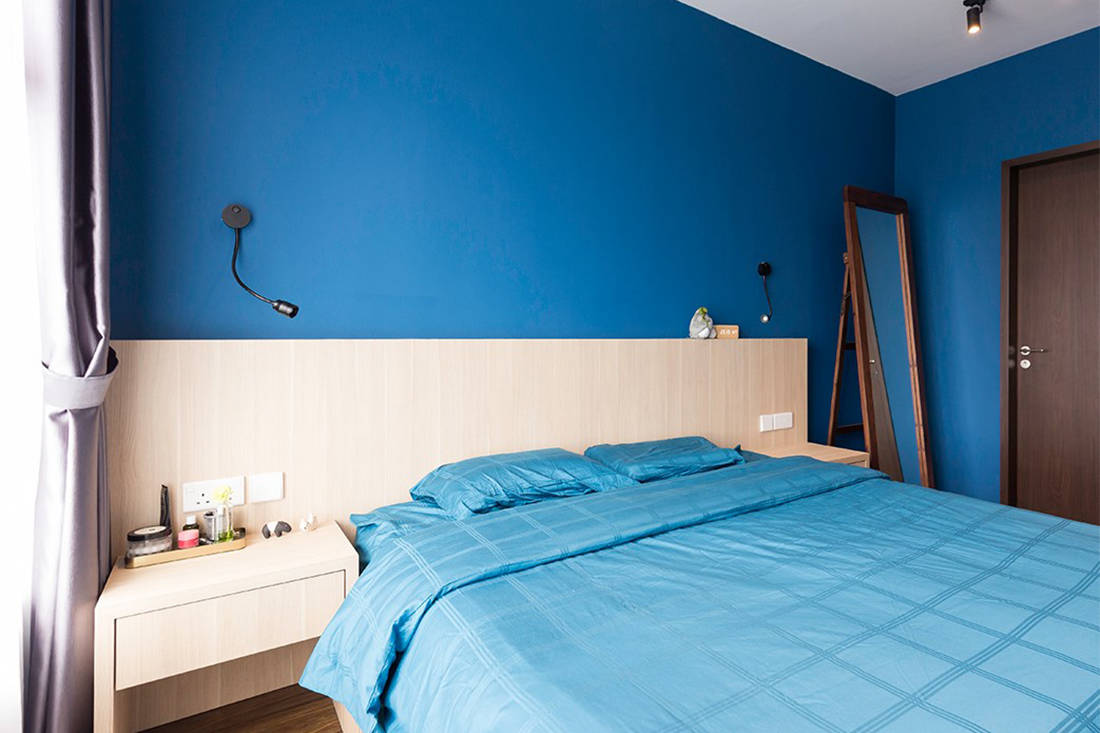 The show piece of this bedroom is definitely the inviting warm blue feature wall reminiscent of the sea. Set against it is a calming pale wood bed with integrated nightstands. In fact, the blue creates a modern Scandinavian vibe complemented by the chic and pared-down aesthetics of this simple but cosy bedroom. 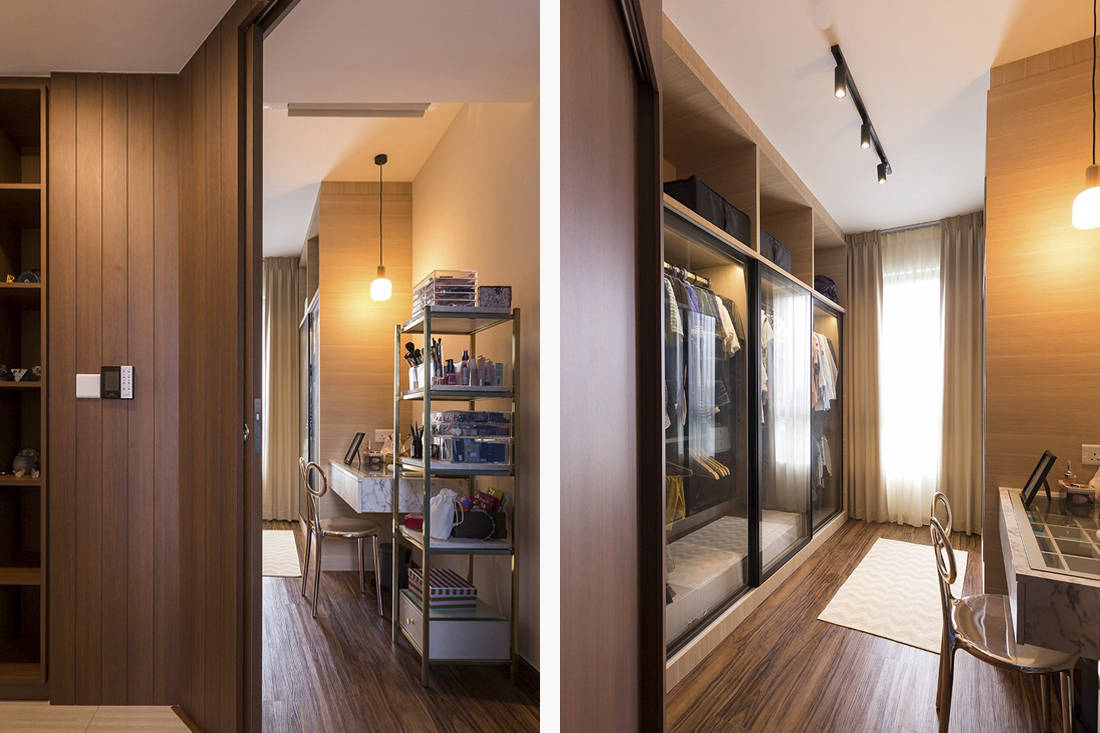 This custom-made sliding door leads to the master bedroom and its accompanying walk-in wardrobe. The designers combined the common room with the master bedroom to create this indulgent space. The only challenge was a structural wall in between the rooms, which hinders fluid movement. So instead of a proper L-wall with casement door opening, the designers created a slanted sliding door that opens towards the walk-in wardrobe area – genius work that’s purposeful and tasteful!