Peranakan-inspired flat with an idyllic charm

One of the first things that strikes you about this Peranakan-inspired flat is its odd-shaped floor plan. While it probably wasn’t easy to execute the overhaul, especially with the structural ceiling retainer and beams standing in the way, Design Director Amanda Pang from AMP Design Co. gamely turned things around with a free-flowing spatial composition.

“It was all about creating a simple and easy-to-maintain home with plenty of storage space for a retired couple in their sixties,” says Amanda. “I saw this as an opportunity to put together a relaxing retreat that highlights the homeowners’ Peranakan roots, and where they can spend their golden years in fond nostalgia.” 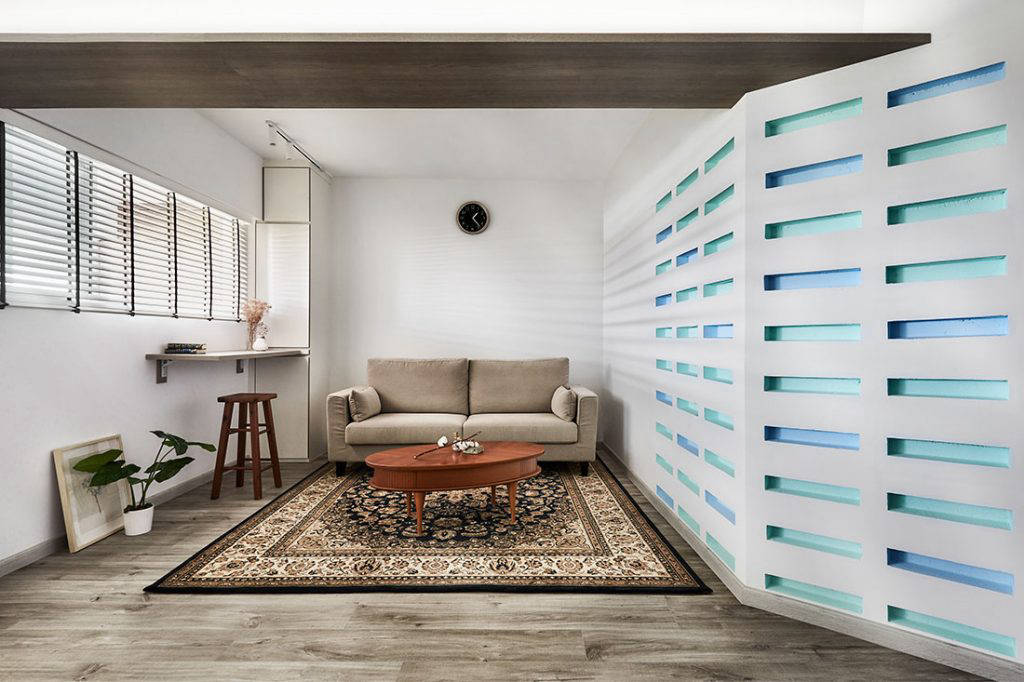 In this Peranakan-inspired flat, hacking away the common bedroom did the trick in introducing a much larger and brighter communal zone fit for entertaining company. Amanda adopted a clean-cut colour scheme of mainly white and woody tones punctuated with soft blue accents in the expanded living area. These soothing pops of colour are used to accentuate the recessed backings of the ventilation block-inspired feature wall. It is also reflected on the wooden hand-carved panels, which serve as cabinetry doors for the full-height TV console. 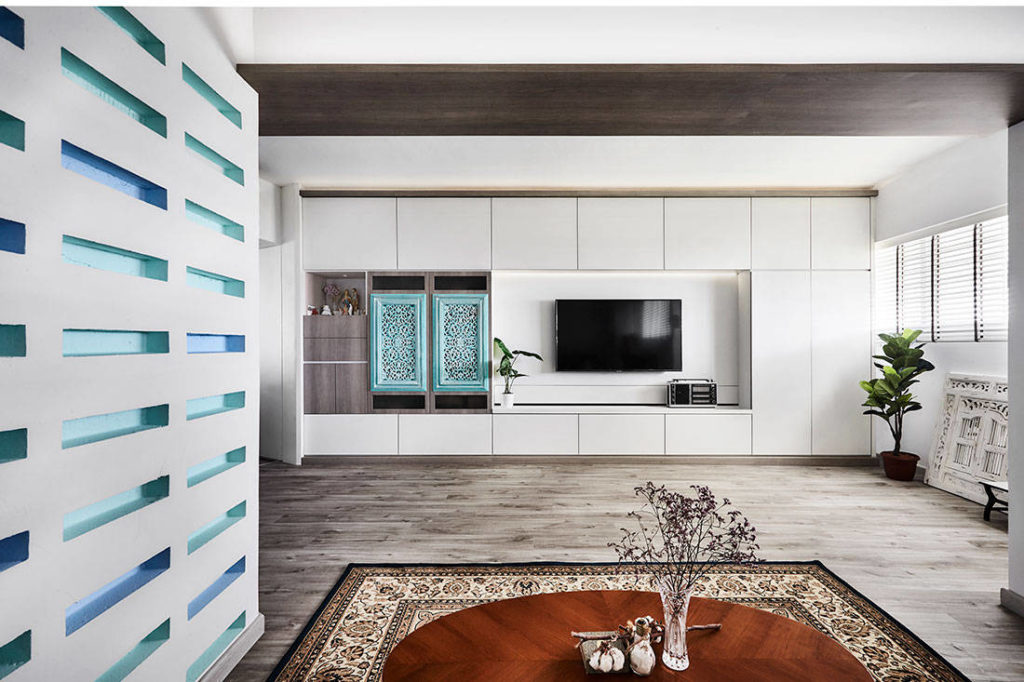 To visually enhance the sense of space in the communal areas, the designer aligned the wood-effect laminate finishes on the ceiling feature and cabinetry. She says: “I created a prominent and parallel line of vision for this streamlined design feature and added recessed lighting to amplify the spacious visual effect.” The custom cabinets are flush with the wall. Not only do they offer ample storage space, they also seamlessly align with the kitchen cabinetry in the cookspace. 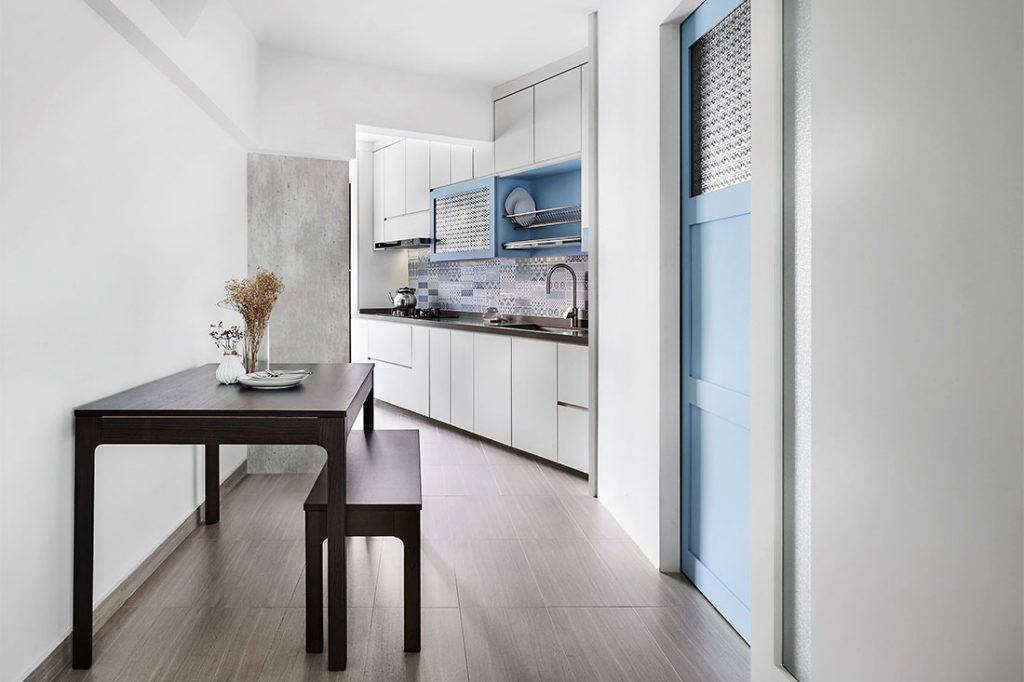 The open-concept kitchen has been thoroughly reworked and expanded to accommodate a new storeroom. Taking into account the homeowners’ love for classic white and blue Chinois accents, Amanda incorporated the design element as tiles on the kitchen backsplash. Other characterful design details include a dishrack cover and storeroom door decorated with traditional Peranakan-inspired glass panels that stand in contrast to the kitchen’s concrete surfaces. 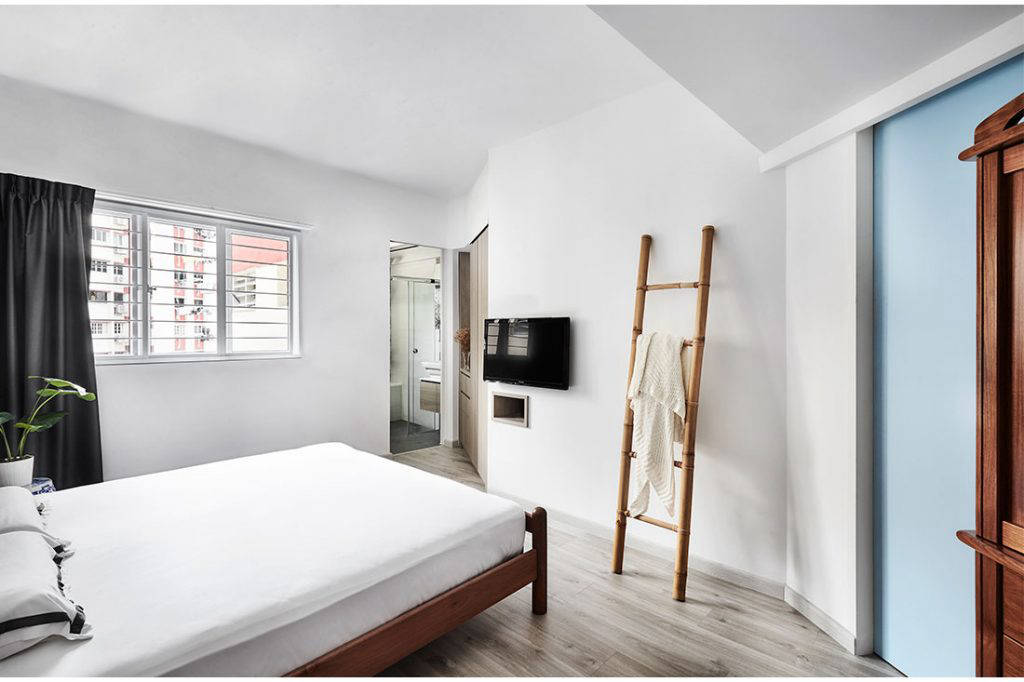 Following a reconfiguration of the master bedroom, the existing storeroom and parts of the hallway now merge with the bedroom. With a larger space, the designer was able to include a walk-in wardrobe with additional storage outside the en-suite bathroom. 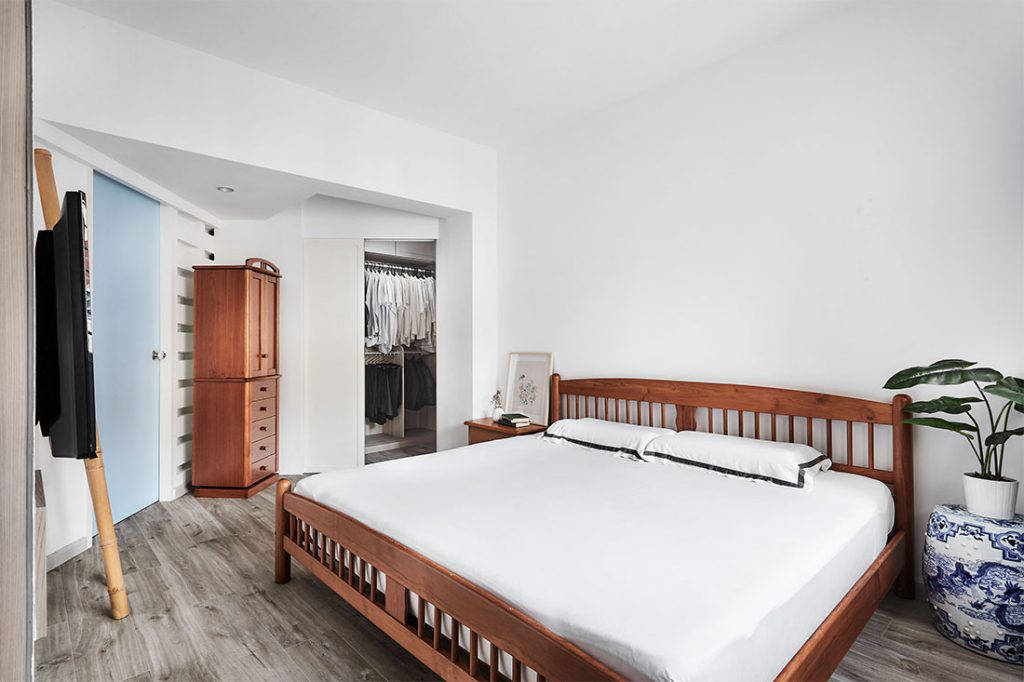 By keeping to a minimal colour palette of pristine whites and soothing wood tones, Amanda managed to fit the homeowners’ existing bedframe and standing dresser into the bedroom. She also incorporated a similar feature wall of ventilation blocks, which establishes a design connection between the communal and private zones.

The nook where the previous storeroom used to reside is now replaced by the walk-in wardrobe. Sliding panels have been installed to demarcate this space from the bedroom and to prevent dust from entering the wardrobe. 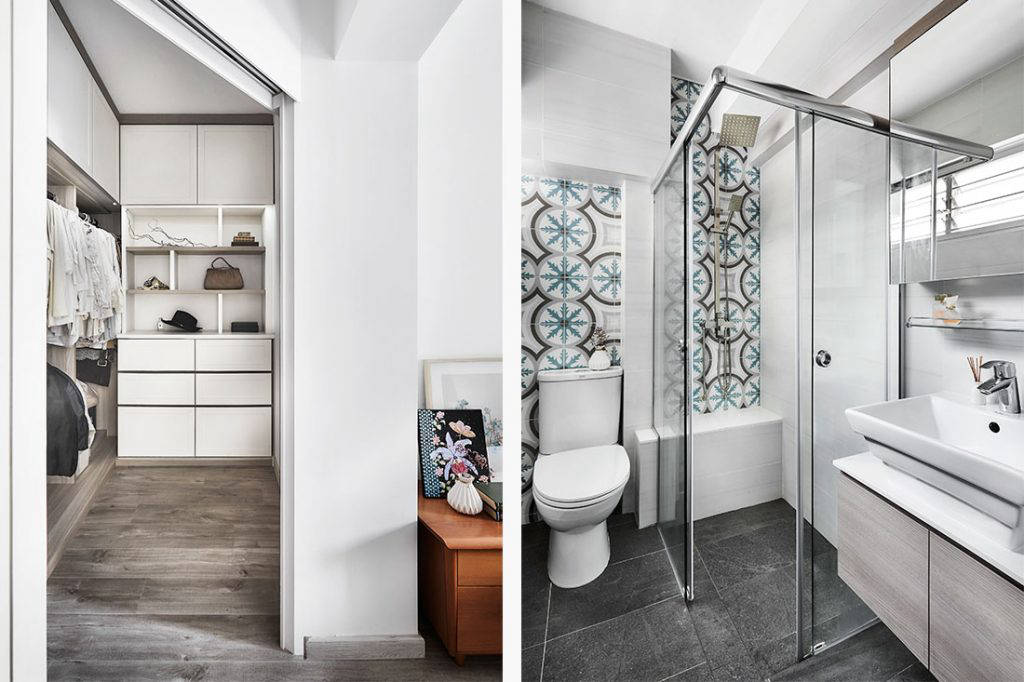 Wall tiles sporting blue Peranakan motifs add visual impact to the bathroom’s dry and wet zones. Amanda says: “It follows the blue-and-white colour scheme in the kitchen. These patterned tiles not only provide a strong style statement, the light blue tone brings on a relaxing and calming vibe.” The exposed piping was concealed to allow the tiles to take centrestage. A shower bench was also installed to add more functionality to the space. With all these thoughtful amenities and more, the retired homeowners have found a forever sanctuary in this practical Peranakan-inspired flat.