Smart moves to reshape and enlarge a three-room BTO flat

An interior designer brings down walls to reshape his compact size BTO flat into a spacious home where all rooms merge as one.

While most people would perceive a three-room BTO flat as small, Edward Seet, principal designer of interior design studio arche° saw the opportunity to get experimental and push the boundaries of HDB living.

Like a typical BTO flat, the unit that he had purchased with his wife had rooms that sat as isolated zones. With just the two of them living here, he sought to turn the somewhat anti-social and segmented spaces into a free-flowing home with an open plan that would be flexible enough to cater for privacy when desired. 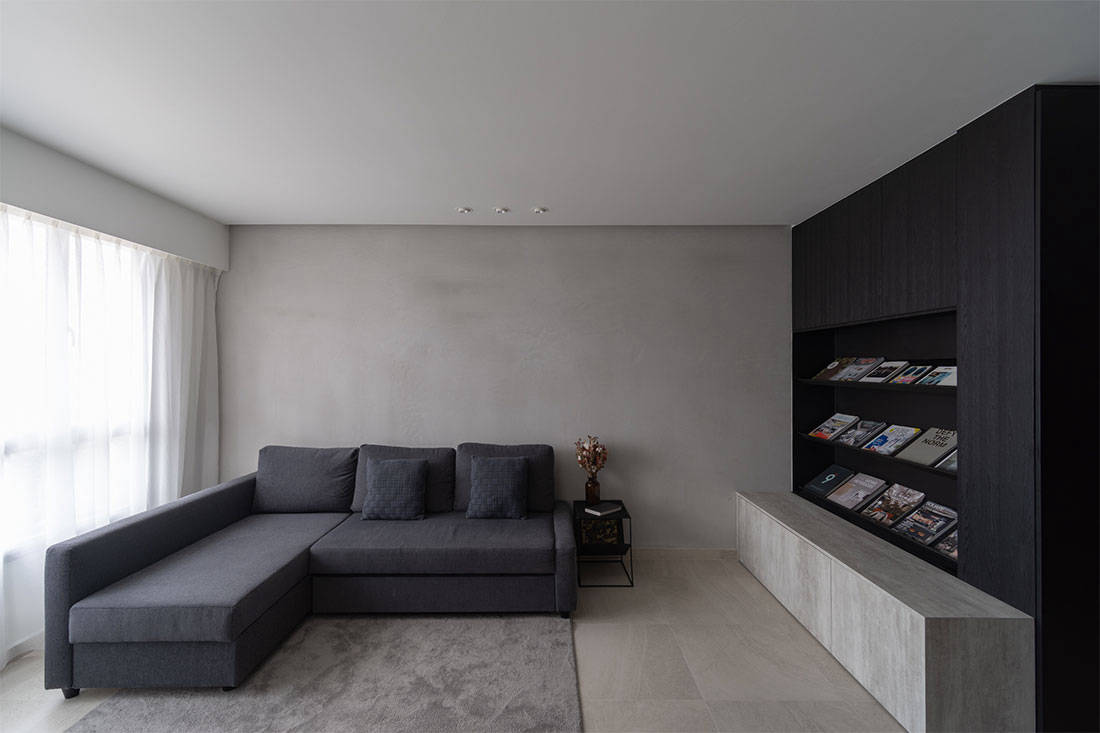 “The original layout had too many walls that broke the space up in a disorganised fashion,” recalls Edward. “So I took down all removable walls, and immediately a new shape emerged. I could then start a transformation from scratch. Nothing was kept during this process.”

Importantly too, the design of this three-room BTO flat responds to the couple’s lifestyle, hobbies and daily habits. The wife loves to read, hence the living area has been turned into a library of sorts with a book cabinet, and has large open shelves to display Edward’s own collection of design magazines. 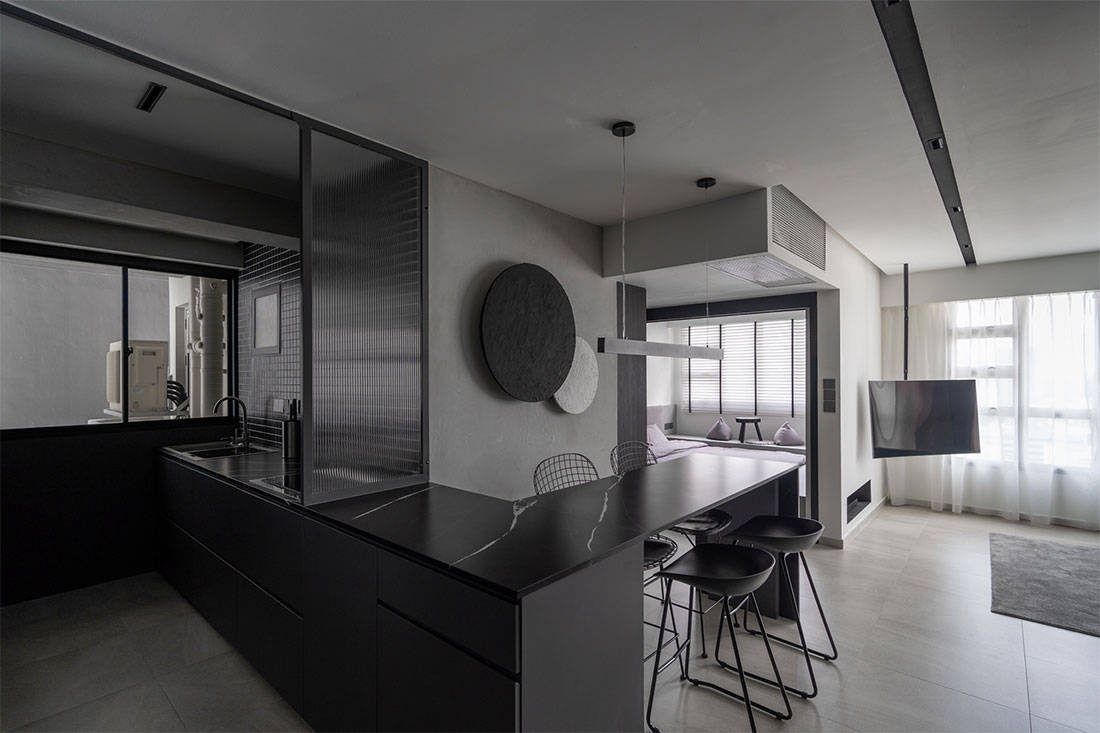 “An activity that we both love to do together is to have movie nights in our living room. So we opted for a bigger couch as we imagine ourselves spending most of our time here, even much more than in our bedroom!” shares Edward. A hanging television also frees up space around the living area, with a space saving niche instead of a traditional console to house the television set-up box and sound bar.

This three-room BTO flat features lots of inconspicuous and seamless storage that was necessary to keep the compact unit feeling spacious and clutter free. Says Edward, “My wife and I own over 30 pairs of shoes. Thus, storage is important to us.” 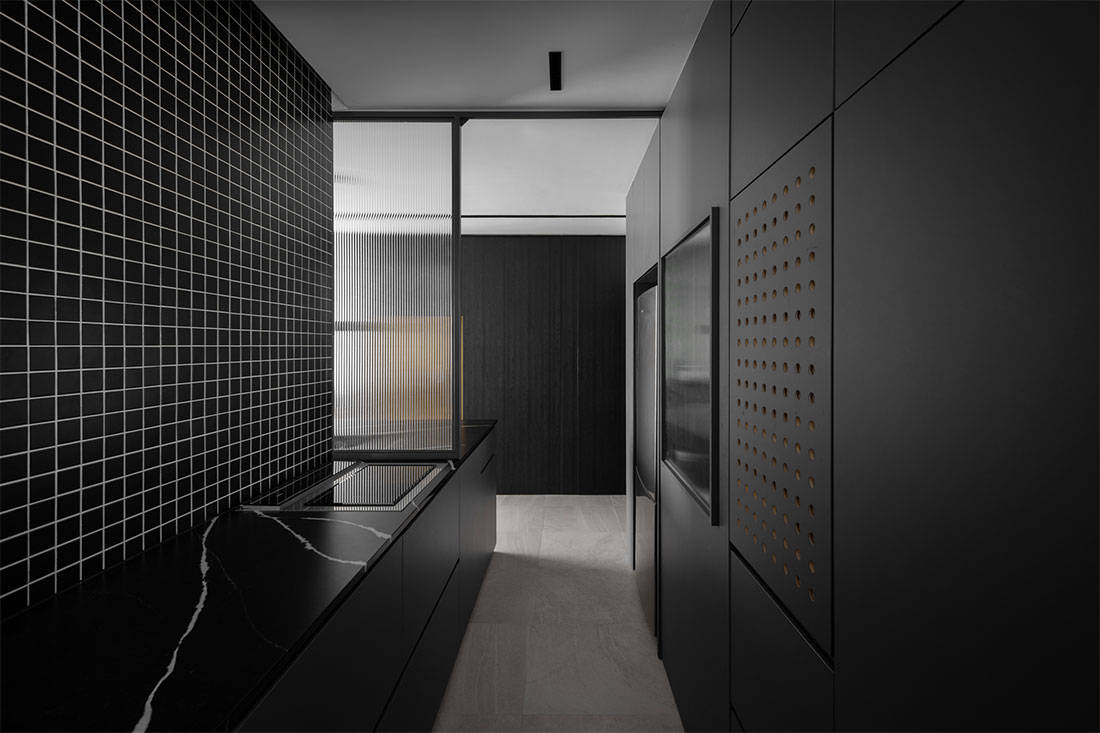 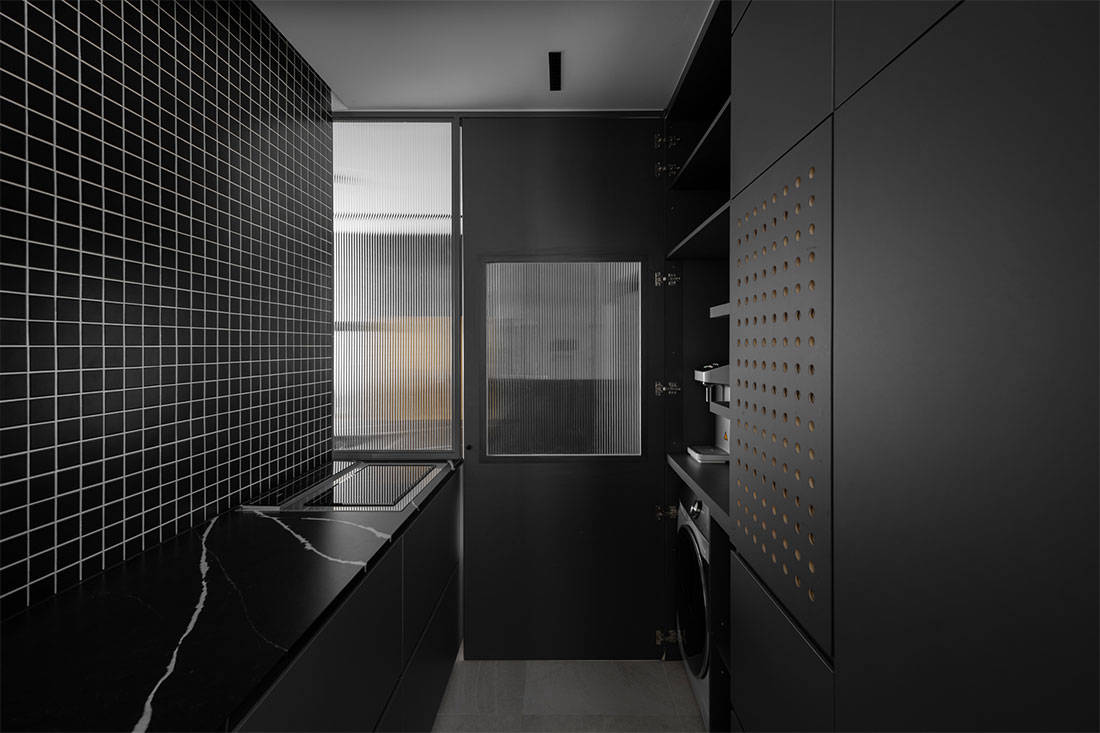 The kitchen/dining area is an important space that has also undergone significant change. “Being an interior designer myself, I have a busy schedule and my job can be really stressful at times. Therefore, I really enjoy whipping up a meal in the kitchen as I find it pretty therapeutic preparing food for the missus,” shares Edward. “Occasionally, we will also invite our families and friends over for meals and drinks. For these reasons, I have to build a functional kitchen as well as a sizeable island for hosting despite having limited space in this small apartment,” he adds. 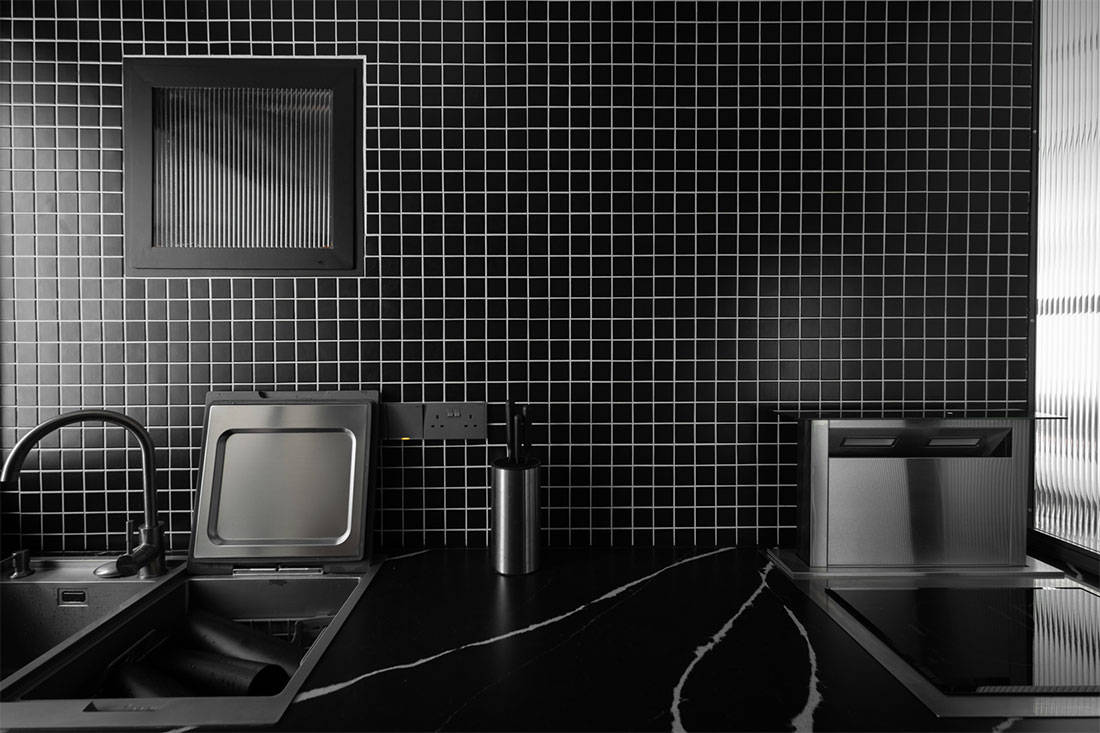 The countertop for dining is suede finished quartz from Silestone, which is stain and heat resistant, and thus ideal for frequent and heavy use. A custom-made circular lamp makes a statement on the otherwise unadorned wall like an art piece, and tunes up the ambience in the evenings with its illuminating glow.

This counter leads smoothly into the kitchen, which is a cool black space brightened with touches of white. Unique features include a cabinet door that doubles as the kitchen door, and a perforated panel to hang laundry on dowel for indoor drying. A downdraft hood sits flush with the countertop for maximum space efficiency. Even when the kitchen door is closed, the ribbed glass window allows light and views through. 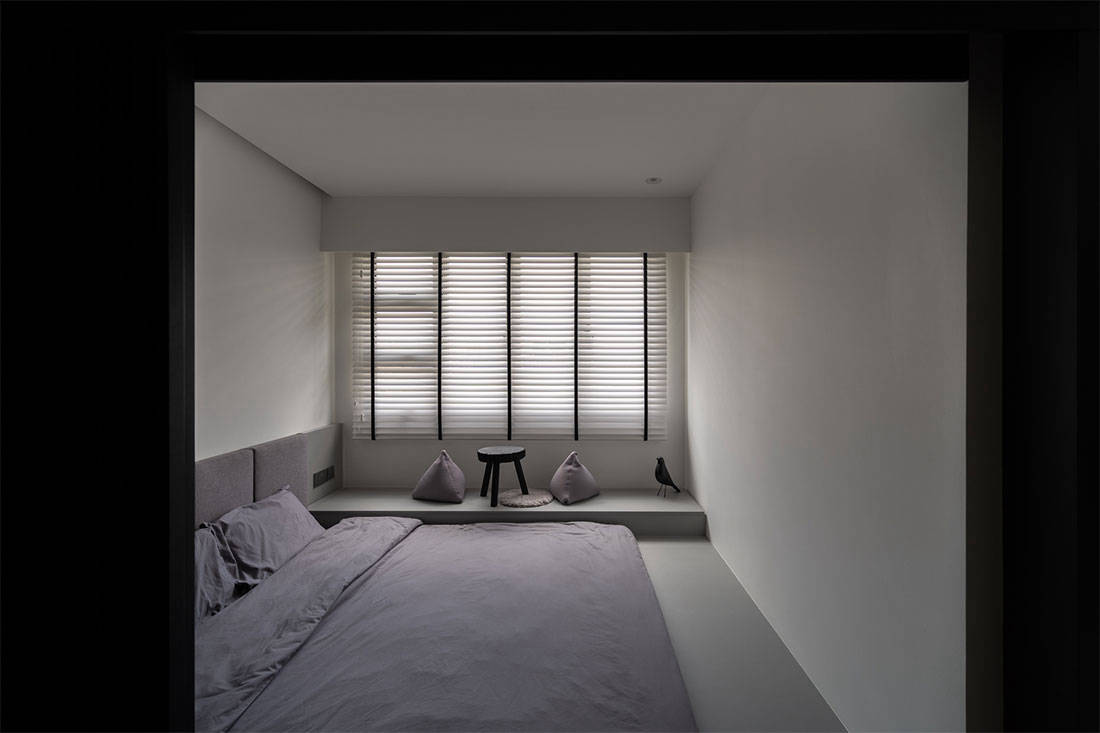 “Both of our lifestyles are quite different and this was critical when it came to space planning. We did not want to feel too disconnected from one another although we might be doing things separately,” shares Edward. To keep the space configurable, the master bedroom features shōji inspired sliding doors that can be open wide so the couple feel that they are in the same zone, or be kept closed to maintain privacy between the public and resting areas. 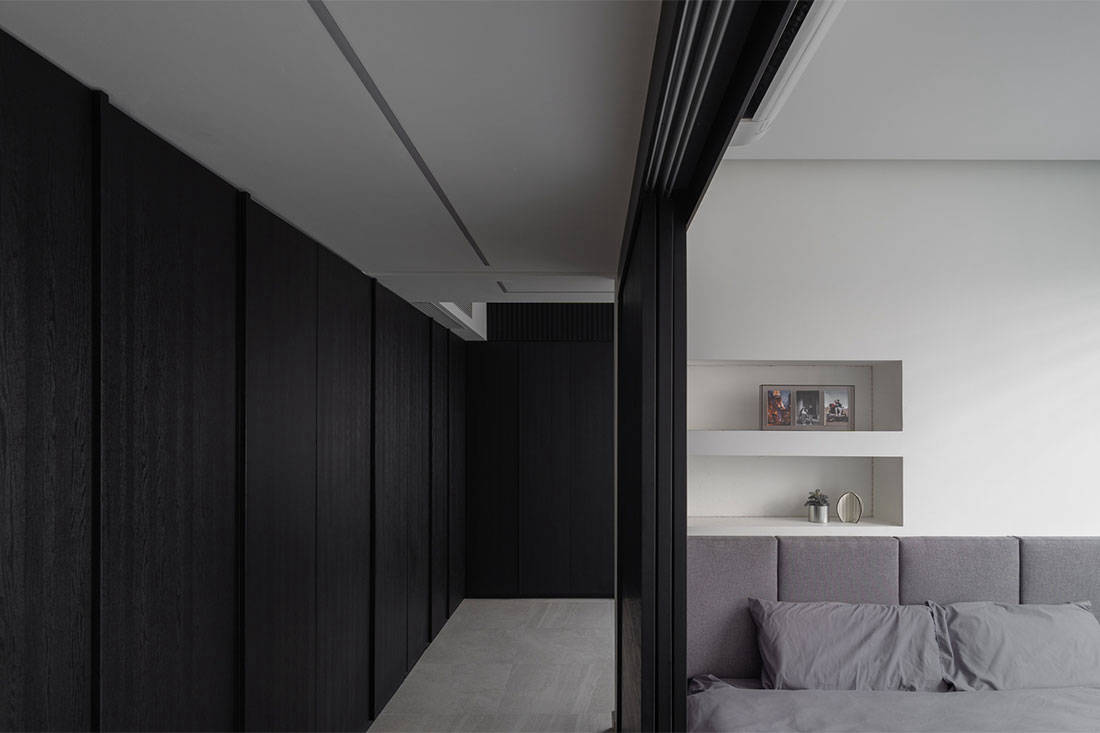 The couple wanted a king-sized bed, but this would have reduced the bedroom’s small footprint much further. Not wanting to forgo comfort, Edward resolved to create a sunken sleeping area to fit a king size mattress that starts right at the edge of the room so the couple can dive right into bed. The designer has even managed to incorporate a bay window/lounge area for relaxation. 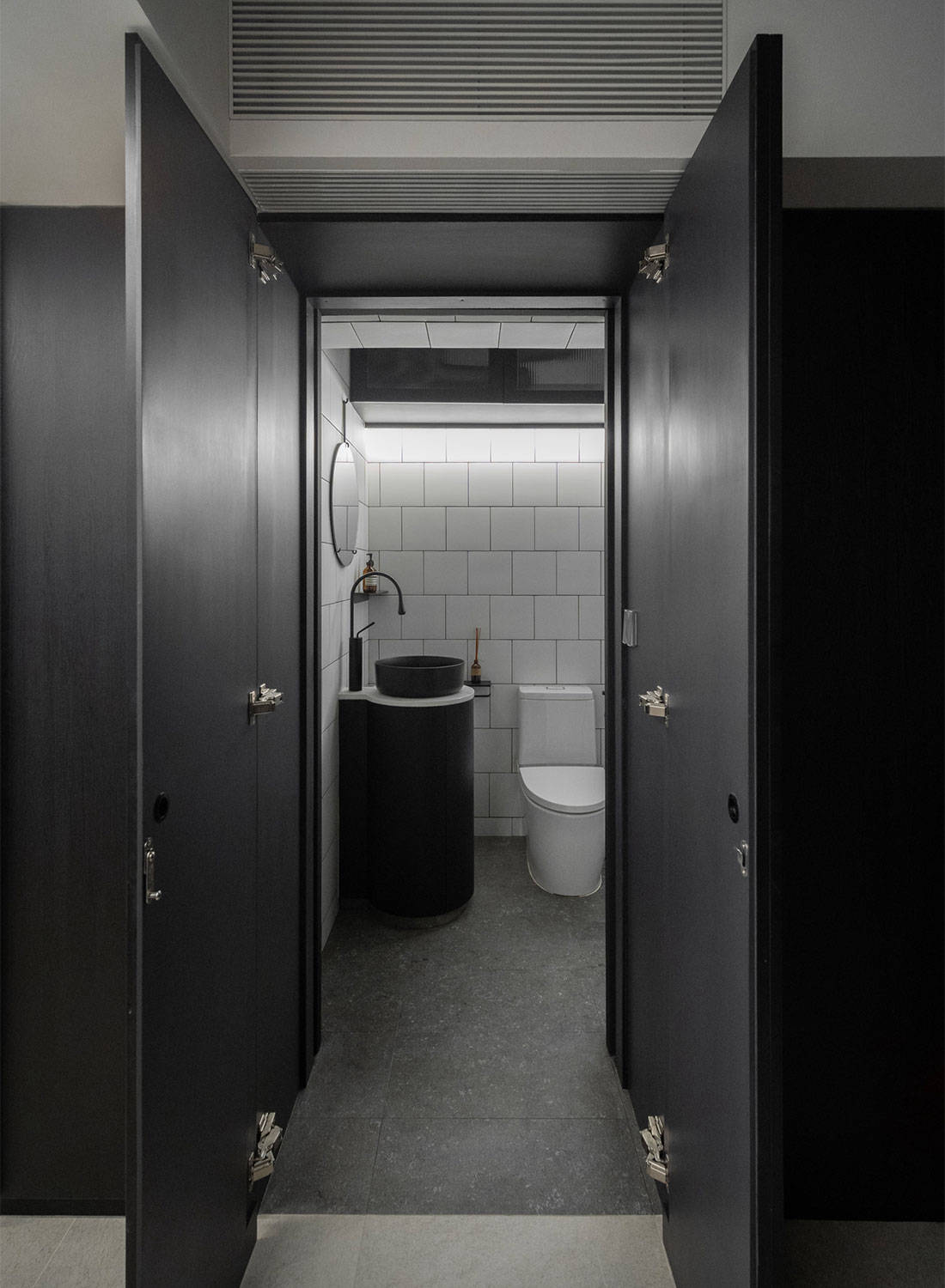 In the master bathroom, patterned homogeneous floor tiles have been selected for easy maintenance. Matte white wall tiles in brickwork formation complement this flooring, while a round-shaped storage vanity creates a more efficient footprint in the tiny bathroom. 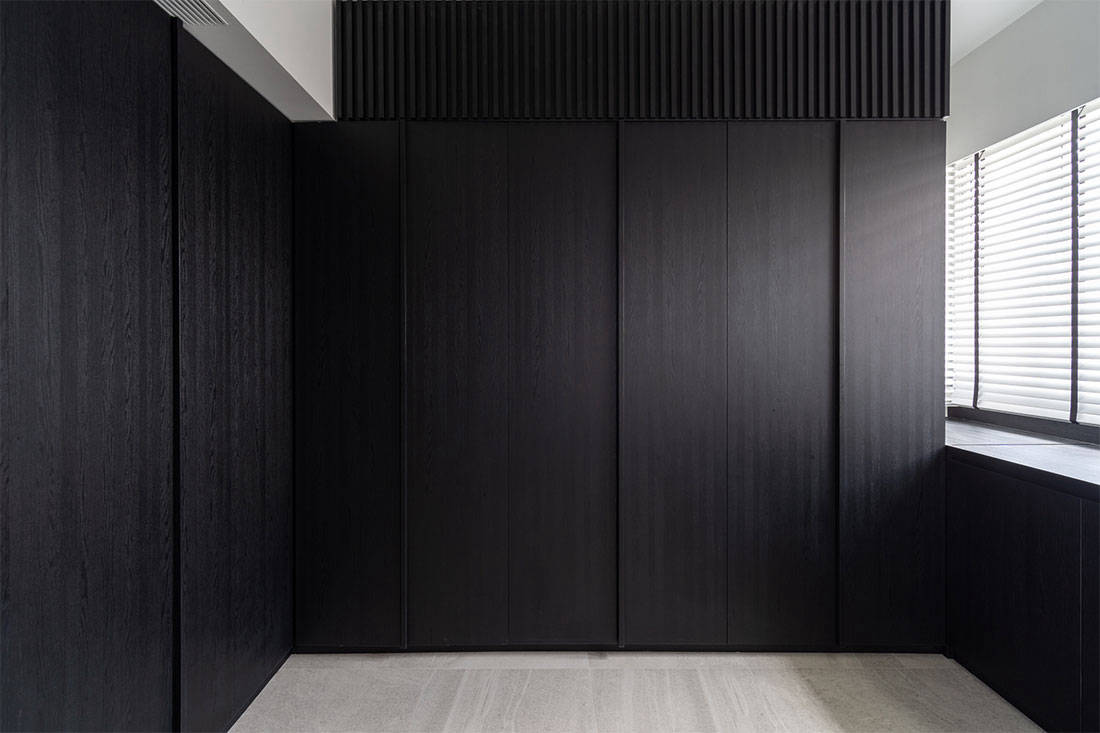 Another priority for the couple was to have a large wardrobe. As such, Edward has converted the other bedroom into an open plan walk-in closet. The closet and bathroom doors in dark laminate finish adhere to the flat’s overall monochromatic scheme and in fact, run the length of the unit. A curtain divider separates the wardrobe from the living area and maintains the concept of flexibility and openness that are driving forces behind the design of this three-room BTO flat. 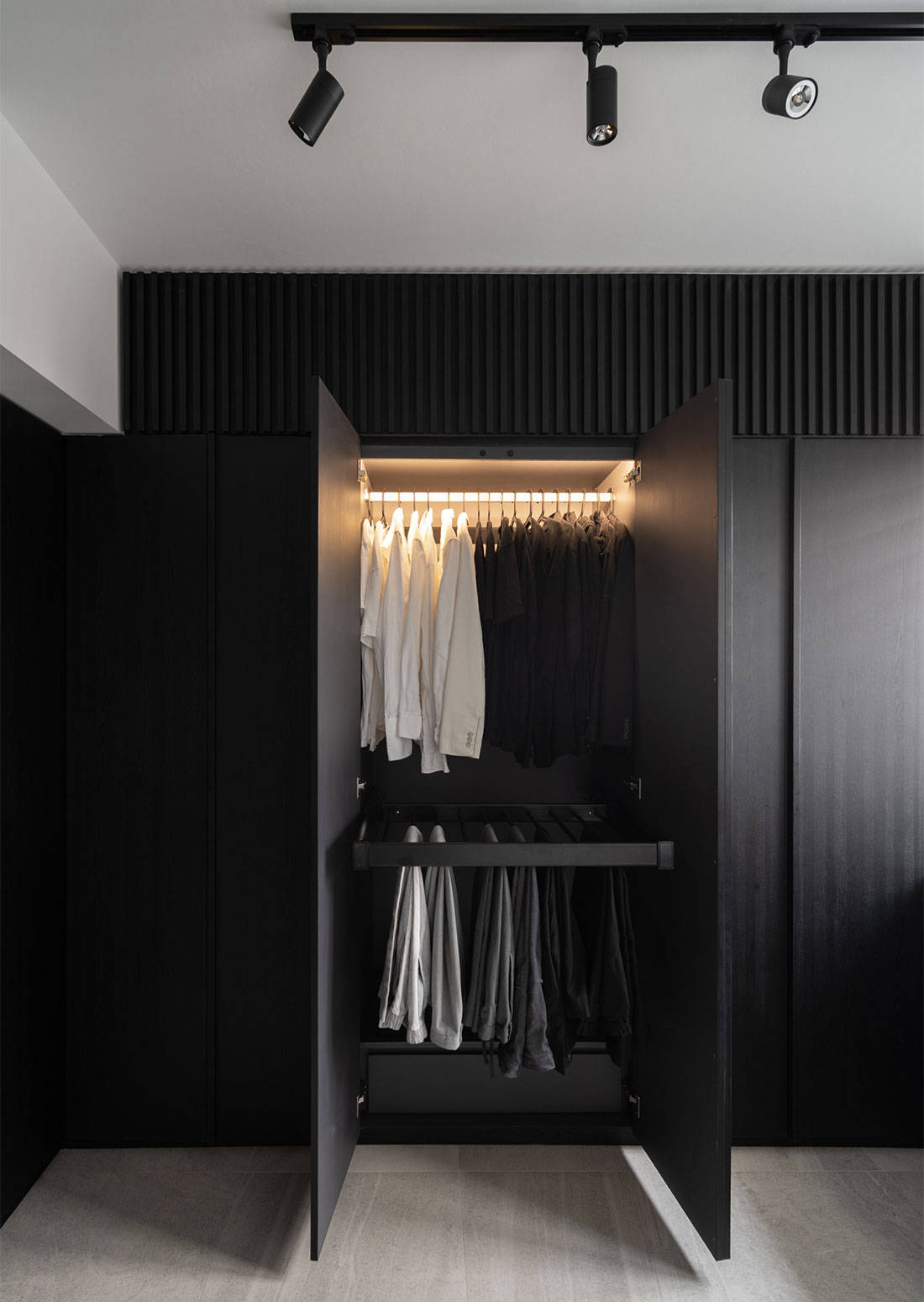 “I would say that the most interesting aspect of this home are the configurable zones; all areas belong to one huge space,” Edward concludes.