A terraced house in the Katong area enjoys influences from Singapore’s Peranakan and colonial heritage, befitting the owners’ mixed backgrounds.

Belonging to Audrey and Kevin Boezennec, a Singaporean and French couple, this home in the Katong area draws its design inspiration from Peranakan as well as British colonial heritage – promising starting points where the richness and colour of the former would imaginably be tempered with the tropical sensibilities of the latter. 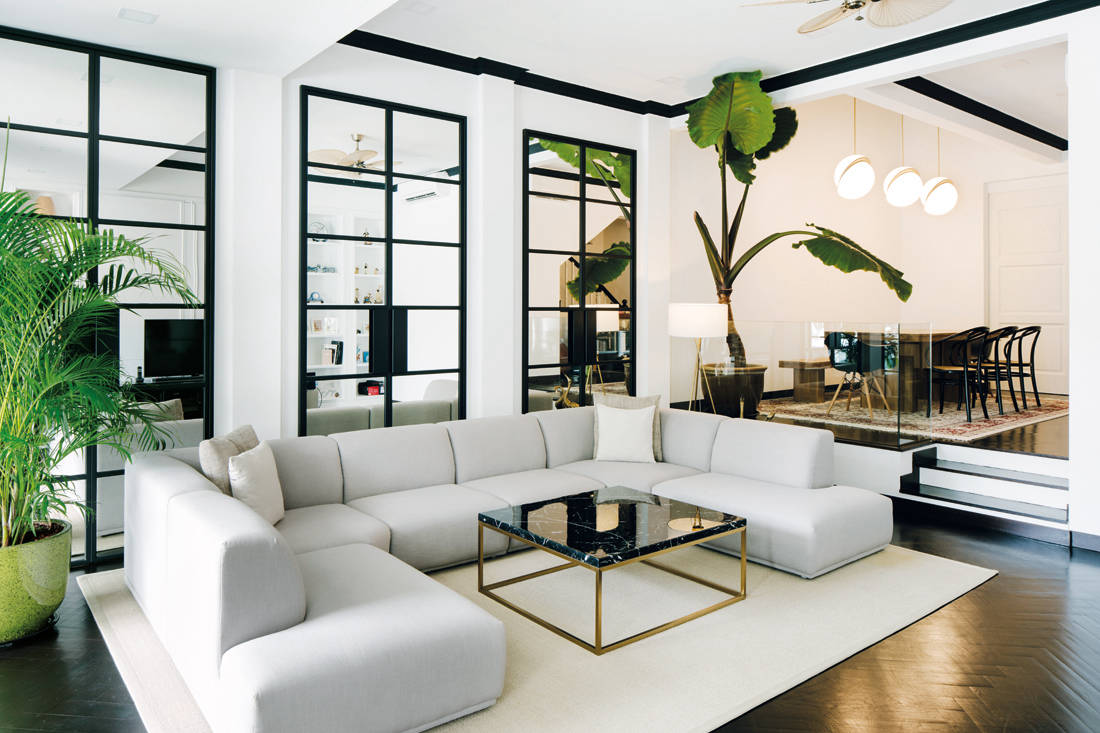 The design work was undertaken by LAANK, and it’s interesting to see the studio’s interpretation of Peranakan culture – that was done so well in the three Violet Oon restaurants – applied to a residential setting and adjusted for home life.

Cherin Tan, Creative Director and Co-founder of LAANK, shares: “To create a perfect blend of heritages, we drew inspiration from the muted, aged wooden tones of a colonial palette and materials with Peranakan motifs, as well as spatial influences from the layouts of colonial bungalows and Peranakan shophouses.” 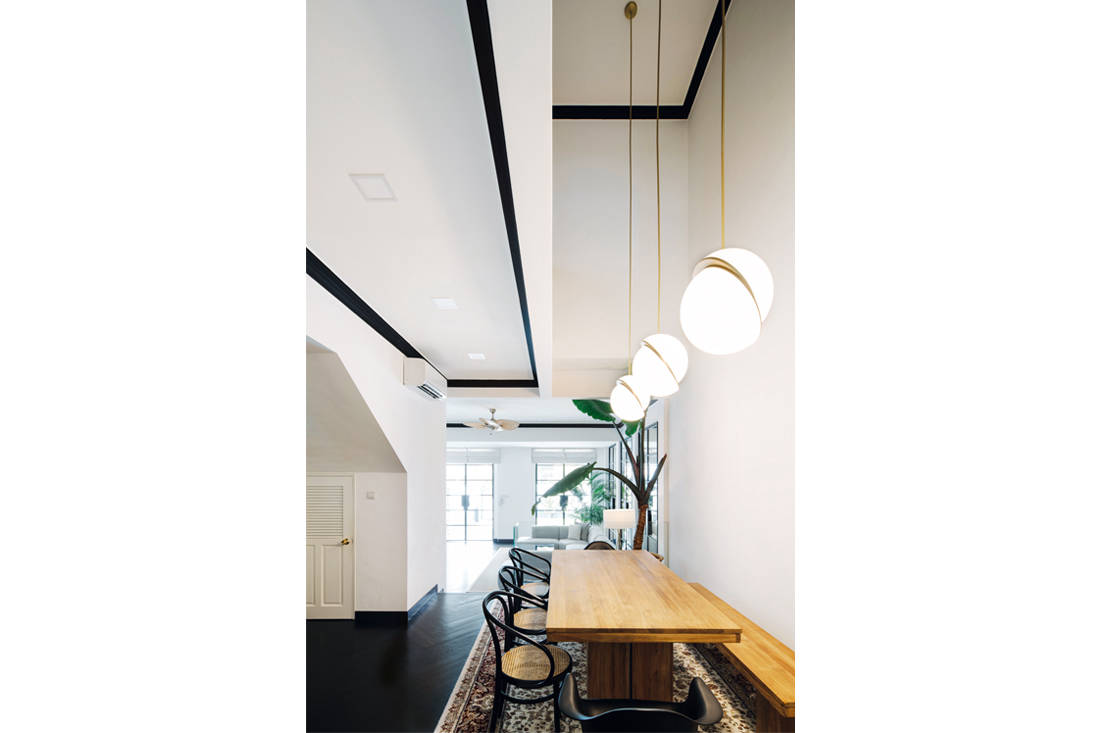 She adds: “With our clients’ mixed backgrounds, we wanted to let the idea of East meets West surface in the design, not just in marrying the aesthetics of the two but also their cultures. Before we started designing the space, we got to understand our clients – how they live, socialise, and host. We also wanted to understand how their cultures could collide organically in this space, which was something we aimed to express through the design.” 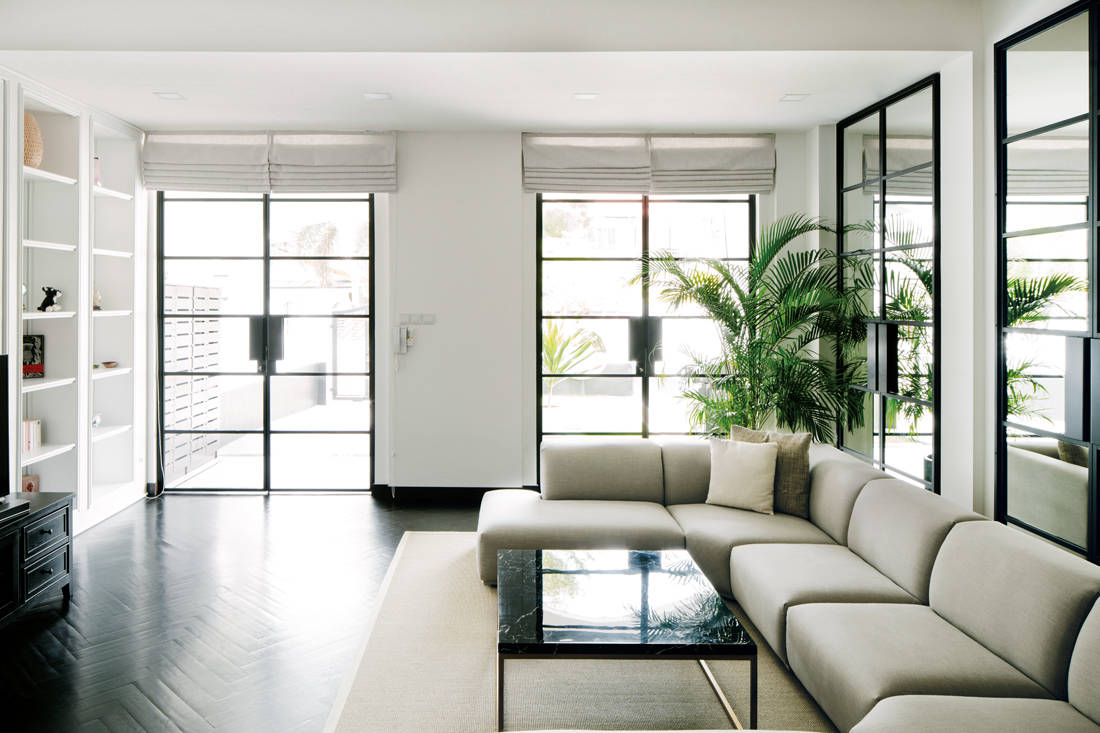 Cherin gave the example of adapting a European culture for the house: “A common practice in many European countries is to sit out in the courtyard and relax. While the house did not have an internal courtyard, we attempted to recreate the experience through our design for the facade. Instead of the typical frontage for a house which would comprise of windows, we opted for bifold panels which could open up to the space outside.” The living room is also styled like a veranda – backdropped by mirror panels that resemble door frames while also surrounded by potted plants. 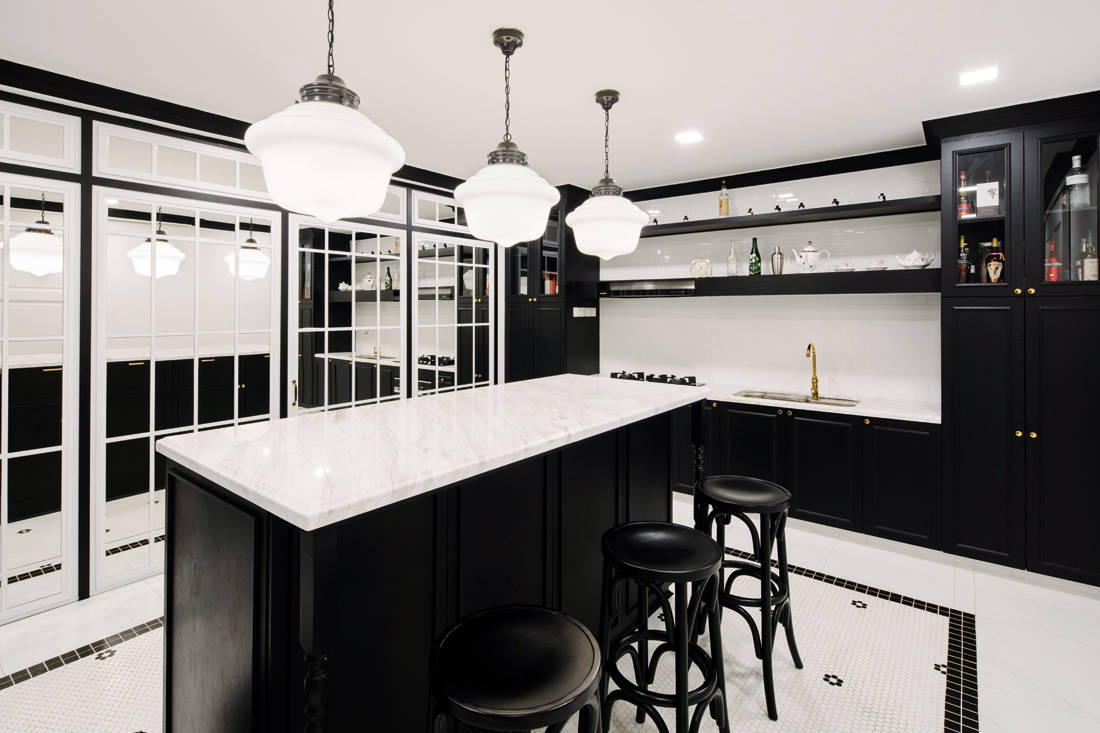 The kitchen is designed as a gathering space, anchored by a Volakas-marble-topped island. Says Cherin: “We mirrored the kitchen’s left and right halves to create symmetry, turning the island in the centre into a focal point. This was important to Kevin, as entertaining guests is a common practice in his culture. People can sit around the island, which can easily transform into a bar, making it not just a place for cooking but also a space for hanging out. The kitchen also connects the front of the house to the backyard and doubles as a passageway, reinforcing the seamless experience we wanted to create for the owners and their guests.” 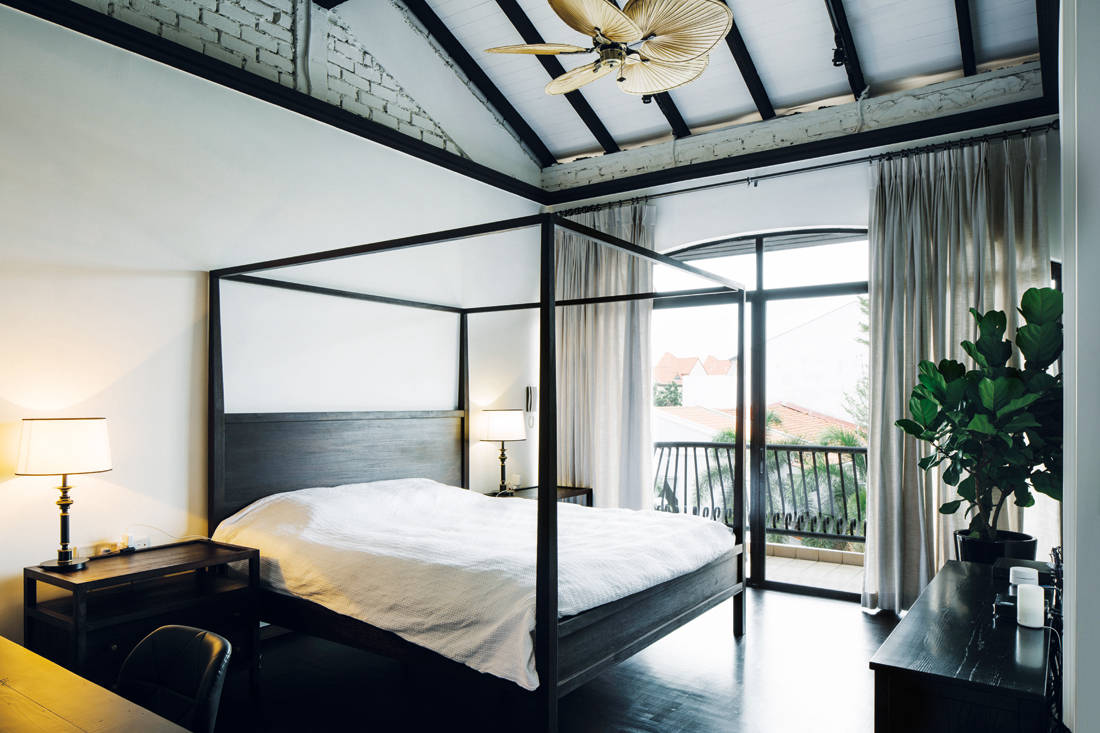 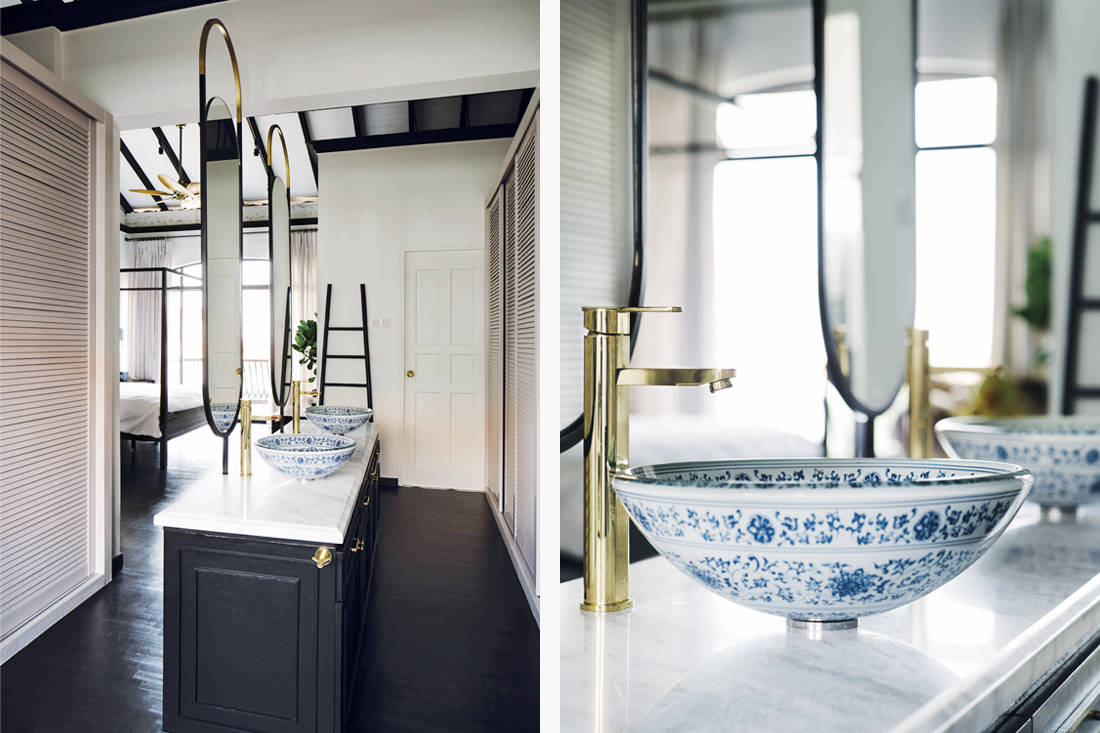 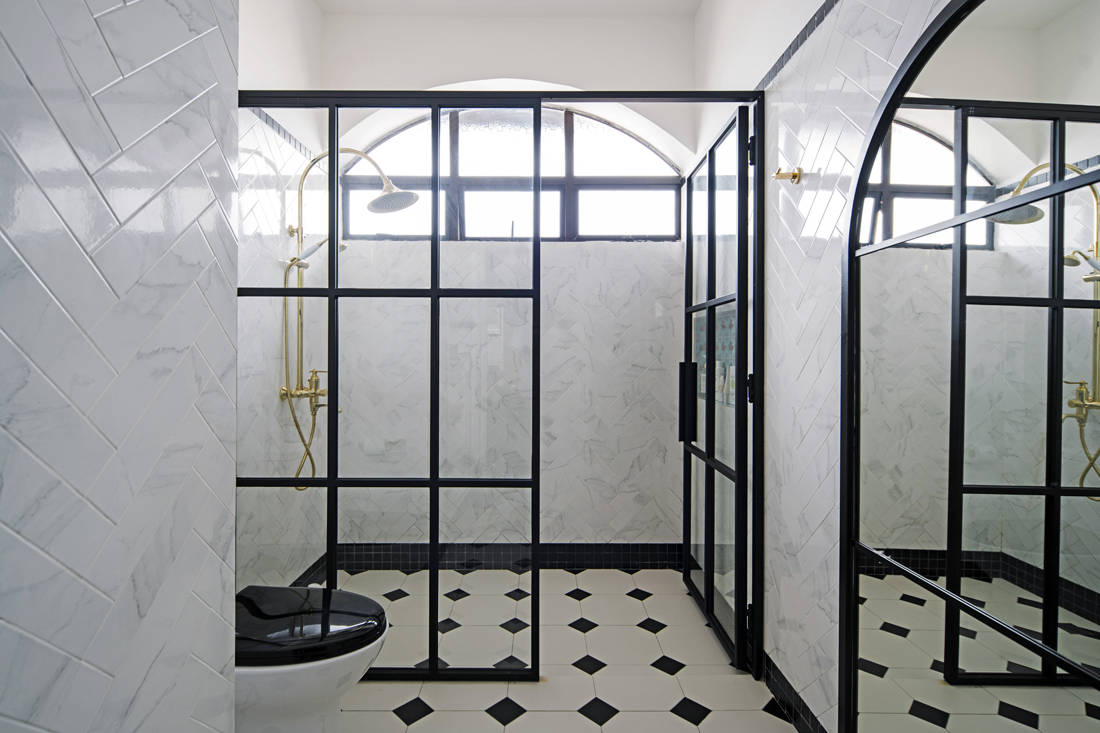 The house is cohered not least through a predominantly black and white scheme. The look is strongest in the kitchen where black and white hexagonal mosaic tiles are used on the floor, Peranakan tiles on the backsplash and black wood veneer over the cabinetry. In the master bedroom, the existing ceiling was taken away to expose the beams, which were then given a lick of black paint.