A flexible Japanese home for a growing family

Architects Kohei Yukawa and Hiroto Kawaguchi design a contemporary home that celebrates the relationship between family and nature in Kyoto, Japan

Japanese architecture has always had a focus on flexibility when it comes to residential buildings. With their keen sense for and appreciation of nature, neighbourhood and community, dwellings are often tailor-made to residents. Houses are built to suit each client’s needs. When a homebuyer purchases an existing residential lot, many choose to demolish and rebuild instead of remodel, preferring a clean slate from which future dreams can be built. While the prospect of designing and building one’s own home is an exciting one, it is even more so when the land is new and fresh with possibilities.

Thus when a fairly new, large-scale residential area opened up in Southern Kyoto, a young couple deemed it the perfect location to settle down as they looked forward to enjoying life’s new opportunities. The area rests on the south-eastern slope of a hill, while the site itself offers unfettered views of rolling hills on the horizon. They were expecting a new addition to their family and the home would allow them to enjoy excellent views of the borrowed landscape while tending to their growing family. 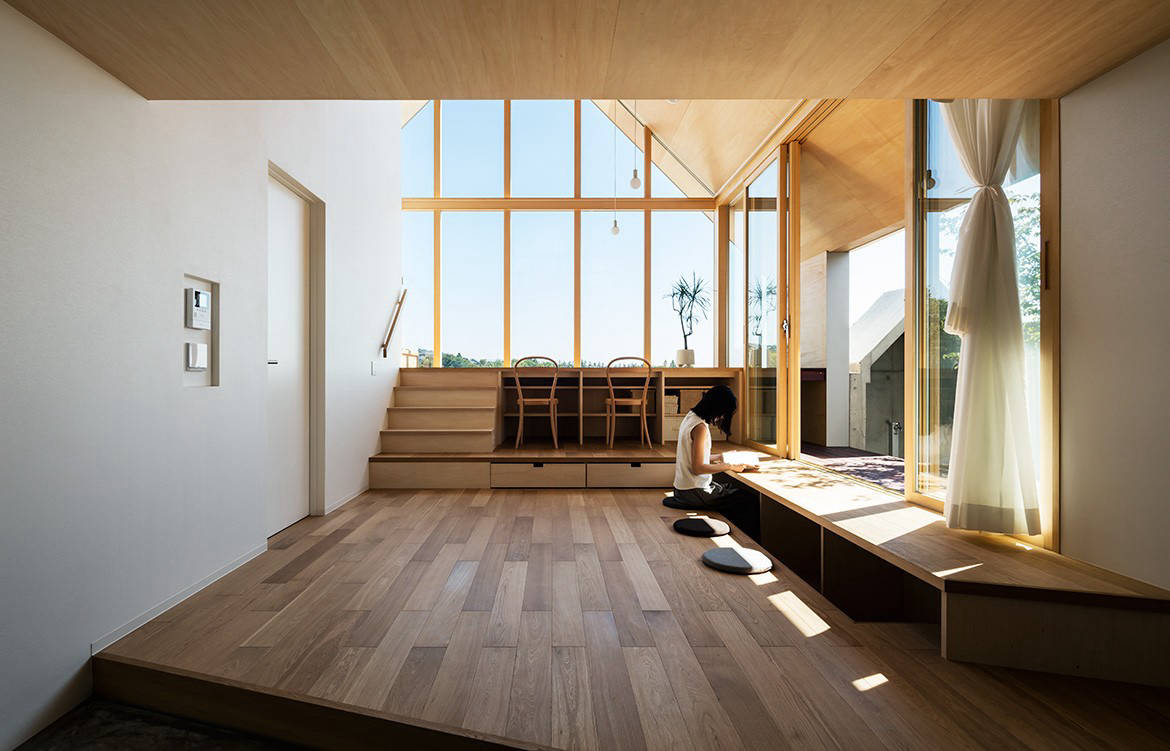 They reached out to architects Kohei Yukawa and Hiroto Kawaguchi, who collaborated on the design of the house by taking into account the couple’s need for privacy, as well as creating open spaces that would be able to foster interaction between family members as they commune with nature. The house itself is a metaphor for the distant mountain range, with its basic roofline comprising three singular ‘mountains’, bound together as one, paying homage to the view. The heart of the house is divided into three, and the architects call it “everyone’s house”. Within it is a hall that allows for a continuous flow of activities. Much like a welcoming courtyard, the space feels open and light as one steps through its entrance. Inclined wooden ceilings and various elevations throughout create an airy space in which light reflects and bounces off unexpected nooks and corners. 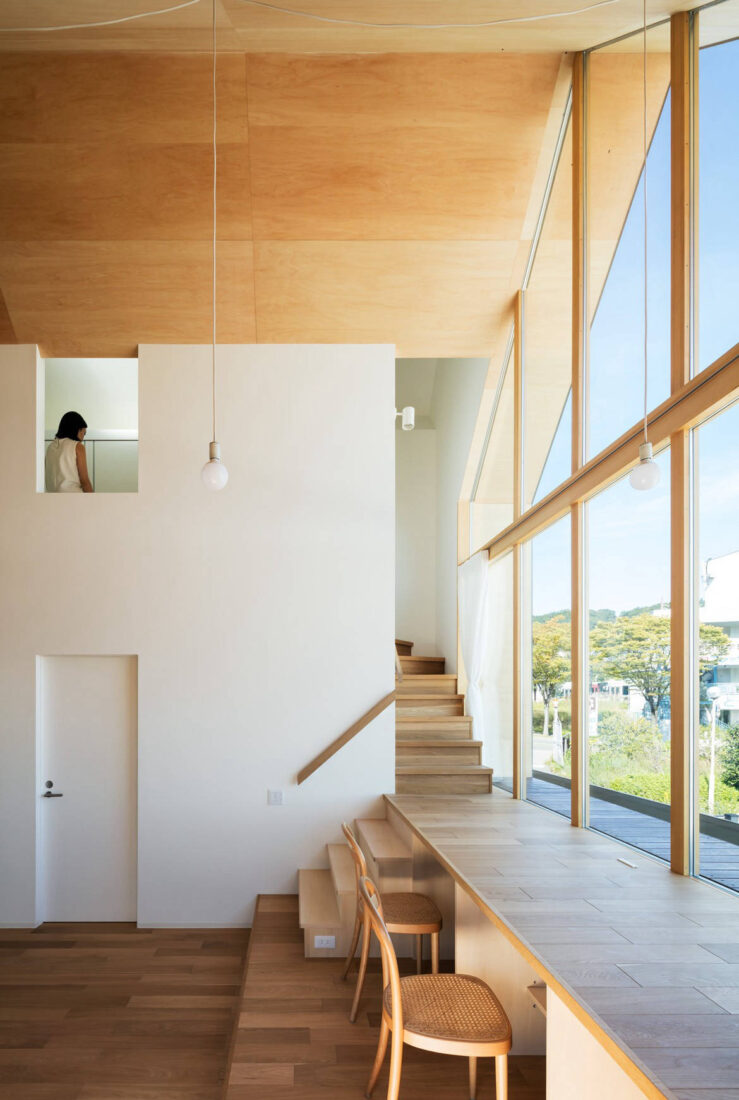 The warmth of this double-volume hall is enriched by wooden decking and panels that flow seamlessly from floor to roof. Elegant and flexible, the space can be transformed according to the function and needs of the family. Fluid elevational elements are peppered throughout spaces contained within Everyone’s House. Apart from separating spaces, these clever details are also used as chairs, tables and storage areas. It’s these daily interactions interspersed with light, wind and a sense of distance that create rich experiences for the homeowners. 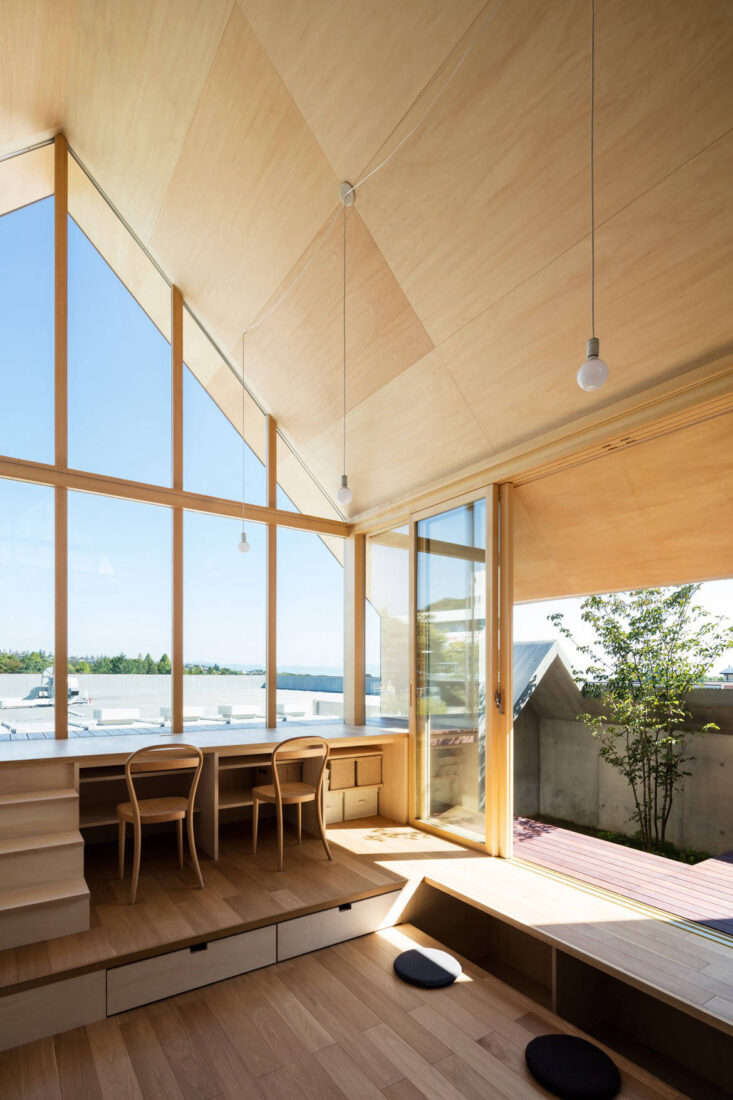 The open nature of Everyone’s House is in stark contrast to other houses in the vicinity that are more private and modest – guarded, almost – with a streetscape surrounded by walls and the occasional peppering of small, tight windows throughout. The house looks almost exotic – out of place and yet not so – with large framed wooden windows that let a generous amount of light in. It offers the family an unhindered view of verdant mountain ridges towards the back of the house while maintaining a relaxed, open facade that faces the street. With its outstanding features, the house still resonates with the neighbourhood – privacy is maintained through asymmetrical solid structures flanking the giant wooden windows in a show of community solidarity. 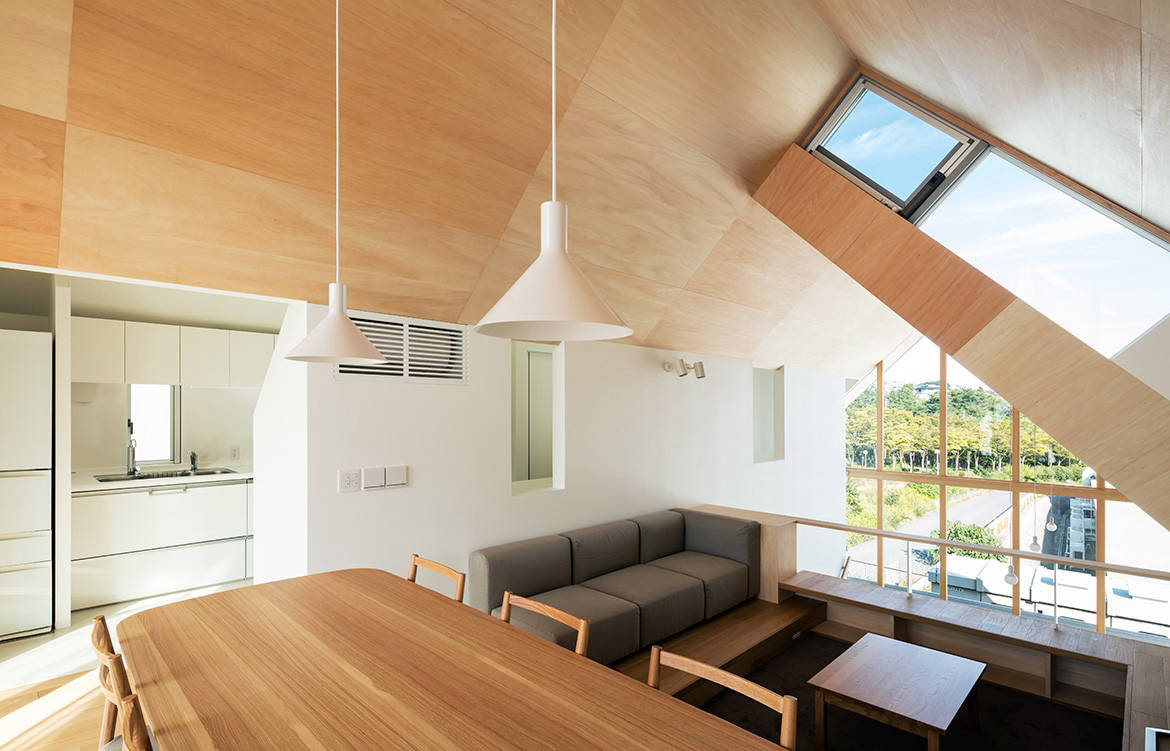 Private and working areas are arranged to the fringe of the house, as such they frame and support the hall, which is considered a public area. The master bedroom and children’s bedroom are located opposite each other, separated by the hall which also acts as a bridge between them. The second floor is reserved for the kitchen, living and dining area that opens up to a balcony. This mezzanine-like space takes full advantage of the open plan of the house, offering views that extend as far as the eye can see.

The house is an allegory. It cocoons the family in its warmth while basking in the presence of surrounding hills. With these various overlapping themes, the architects reinterpret a house, its people, the town and landscape through reconstruction of space to create a relationship which would bring meaning to a family. Through the house, they are one and home. 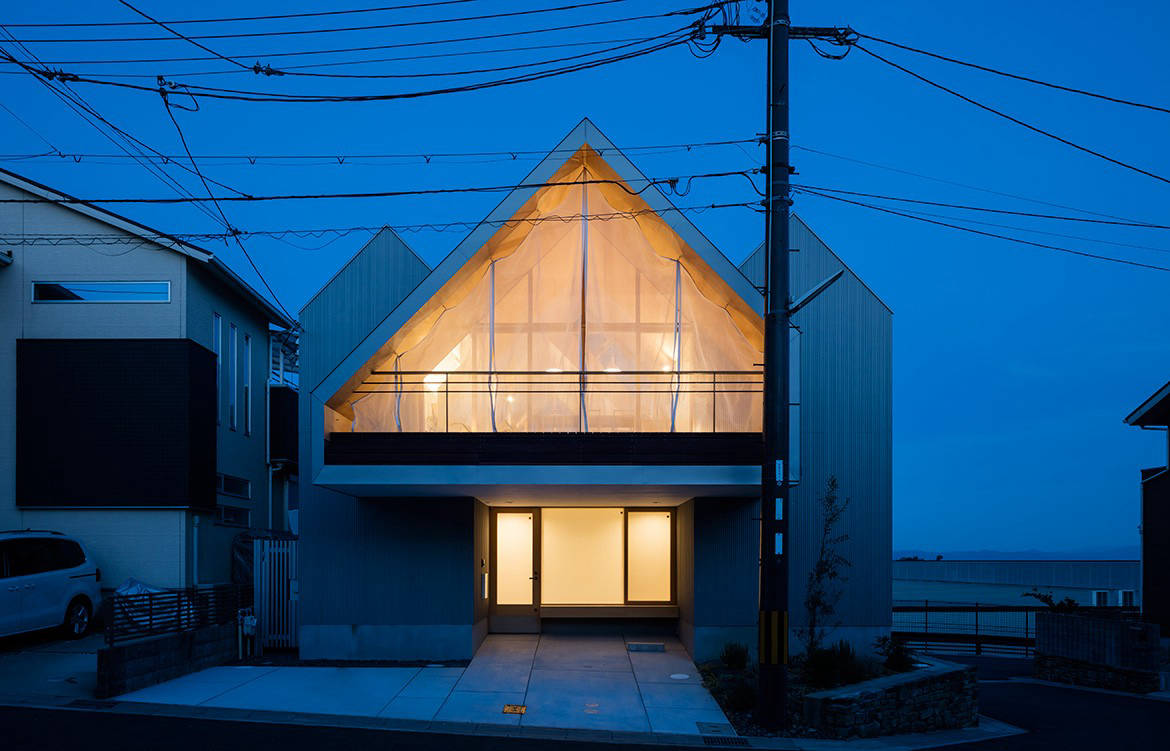