A posh yet family-friendly apartment

Despite its limited floor space, this abode doesn’t shy away from using bold finishes and upscale design elements to achieve a look of luxury.

Who says minimalist decor works best in small apartments? This three-bedder, in which a family of four resides, opts for bold features and finishes to pull off an upscale look. AP Concept’s Aaron Poh, the lead designer for the project, shares, “I used marble to accentuate the ‘posh’ lifestyle look, and added a touch of walnut for a woody feel to achieve a timeless design.” 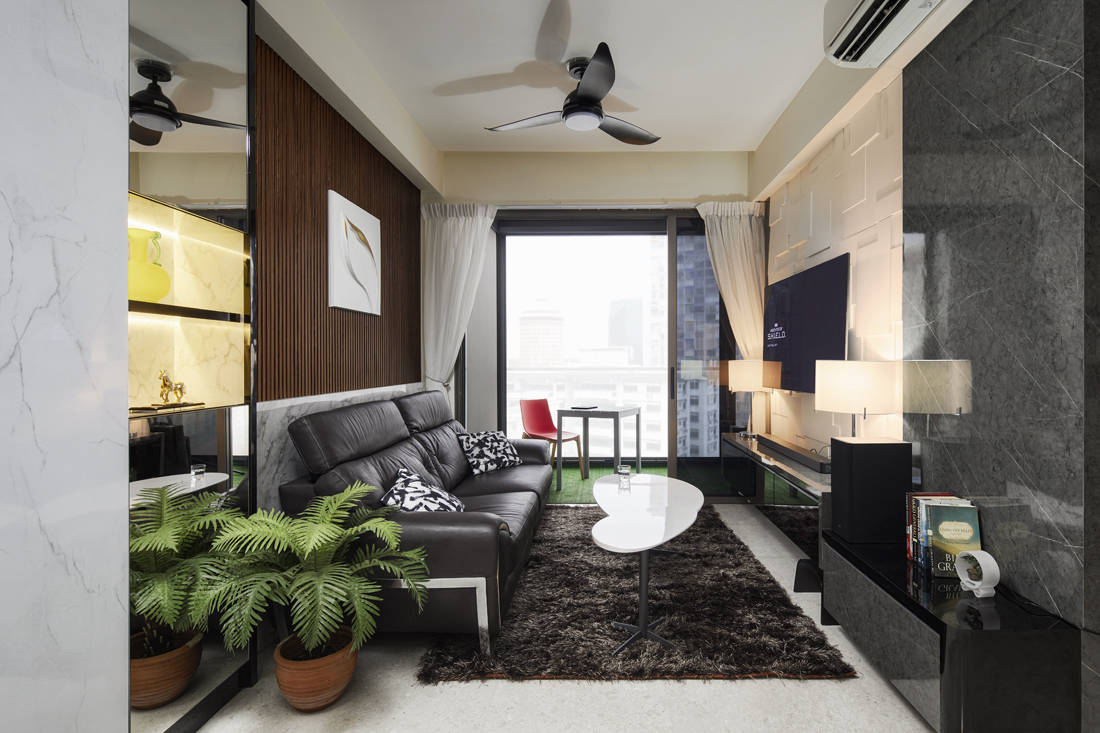 The living room features a medley of colours and textures. Monochromatic acrylic panels of varying depths transform the TV feature wall into a visual point of interest. Opposite it is another feature wall that combines warm wooden strips with white marble – a trendy design that plays with tonal and textural contrast. It pairs well with the white painting above the couch, which is part of the homeowner’s art collection. “The homeowner loves to collect such paintings and hoped I could incorporate it into the home design,” Aaron elaborates. 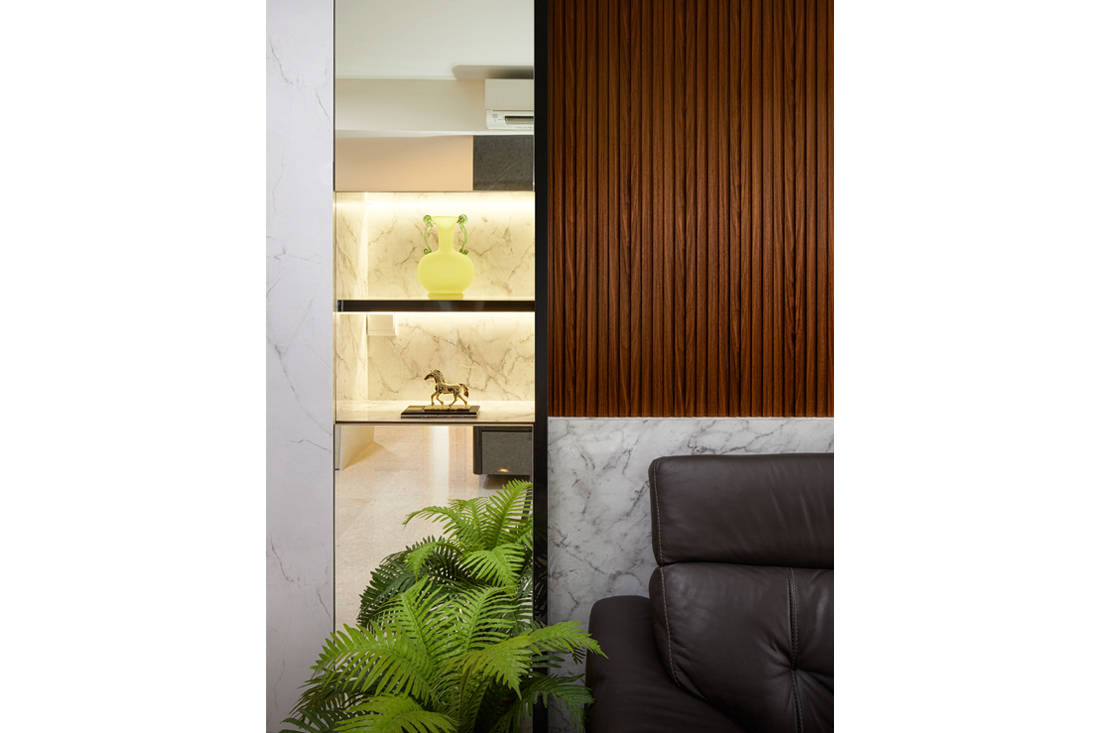 What’s more, a secret door hides behind the mirrored wall beside the sofa. “The wall was uneven so we had to think out of the box to maximise its use,” says the designer, who converted it into a playful, multi-functional feature. Flushed against the wall, it skilfully masks the imperfection but also doubles as a storage shelf with mirrors, visually enlarging the small footprint of the living room. This stroke of genius exemplifies the designer’s talent in fulfilling the brief for a luxurious interior, while being as space-savvy as possible to maintain a clutter-free design. 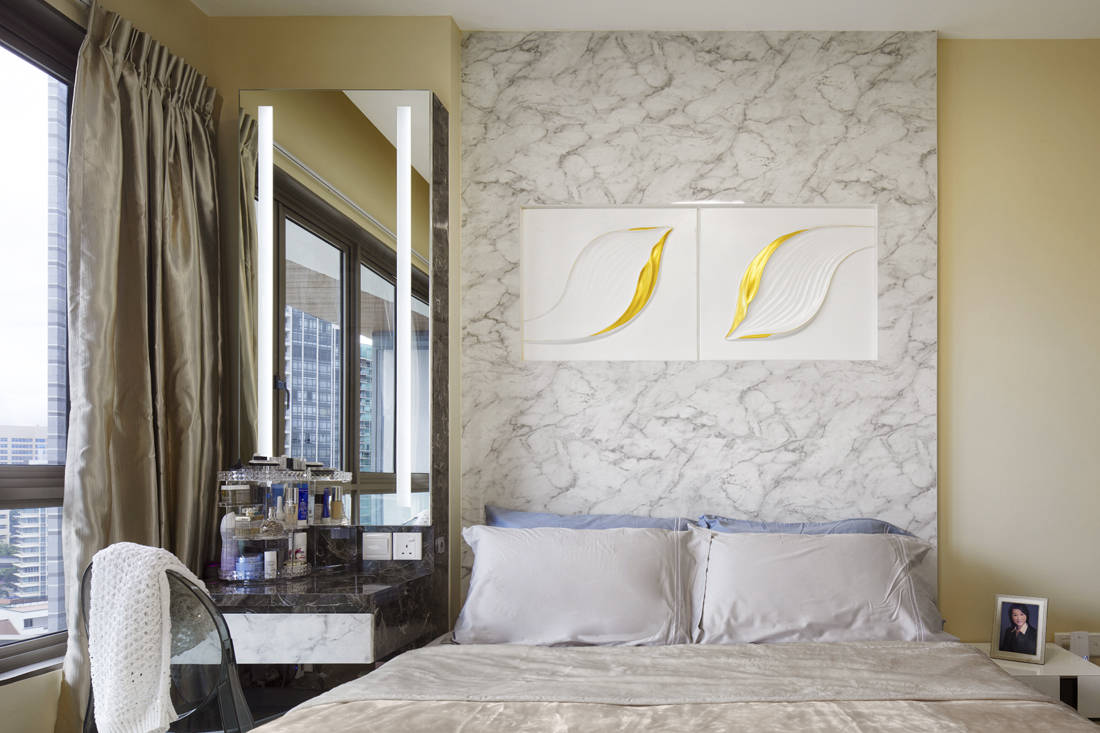 The same white marble laminates in the living room appear in the master bedroom as well. A liberal use of the laminates lends visual continuity and up the luxury quotient of the space. It boasts a striking white marble headboard, on which two paintings, almost identical to the one in the living area, hang. Originally an unused, ‘wasted space’, the wall between the window and the bed has also been converted into a functional area for the homeowners. It features a vanity table with a tall mirror, finished in white and black marble-like laminates. 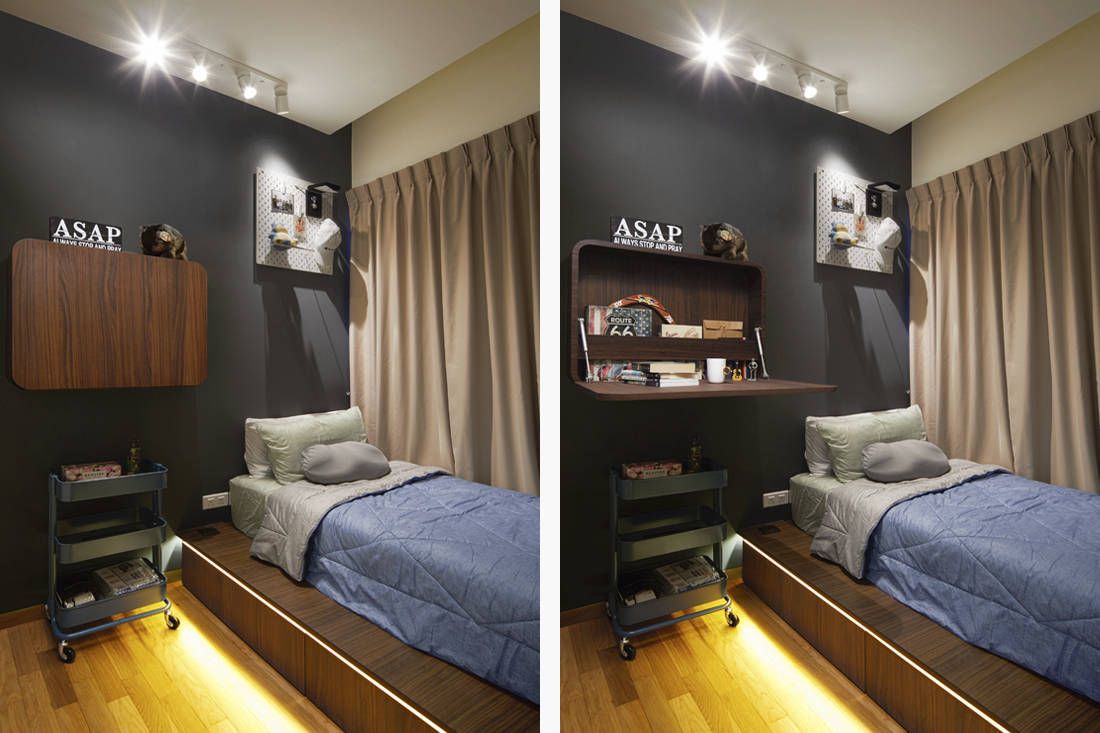 The sole area that deviates from the overall design of the apartment is the kid’s bedroom, which employs a more modern decor scheme. “It’s totally different from the rest of the house; it’s like a space of its own,” says the designer. A black feature wall anchors the interior, bringing about a cosy yet masculine ambience. Warm wood-like laminates also clad the platform bed and the wall-mounted table. The latter is a space-efficient feature that also serves as a storage compartment and opens up into a makeshift workstation.