Glamping at home where every day is staycation time

The luxury of glamping in the South African savanna can be experienced every day in this charming corner terrace house.

While most of us associate camping with roughing it out in the great outdoors, there are some who enjoy the experience by ‘glamping’, a portmanteau of ‘glamour camping’. This is the act of enjoying the rigours of nature by upping the luxury factor. This idea of glamping in the majesty of the South African savanna becomes the main design directive in this corner terrace house designed by Haüs Atelier, where every day is like having a staycation.

This ‘quintessential garden home’ holds true to its charming vernacular (tall windows, exposed brickwork and plenty of greenery), but has also been infused with the charm and culture of South Africa. 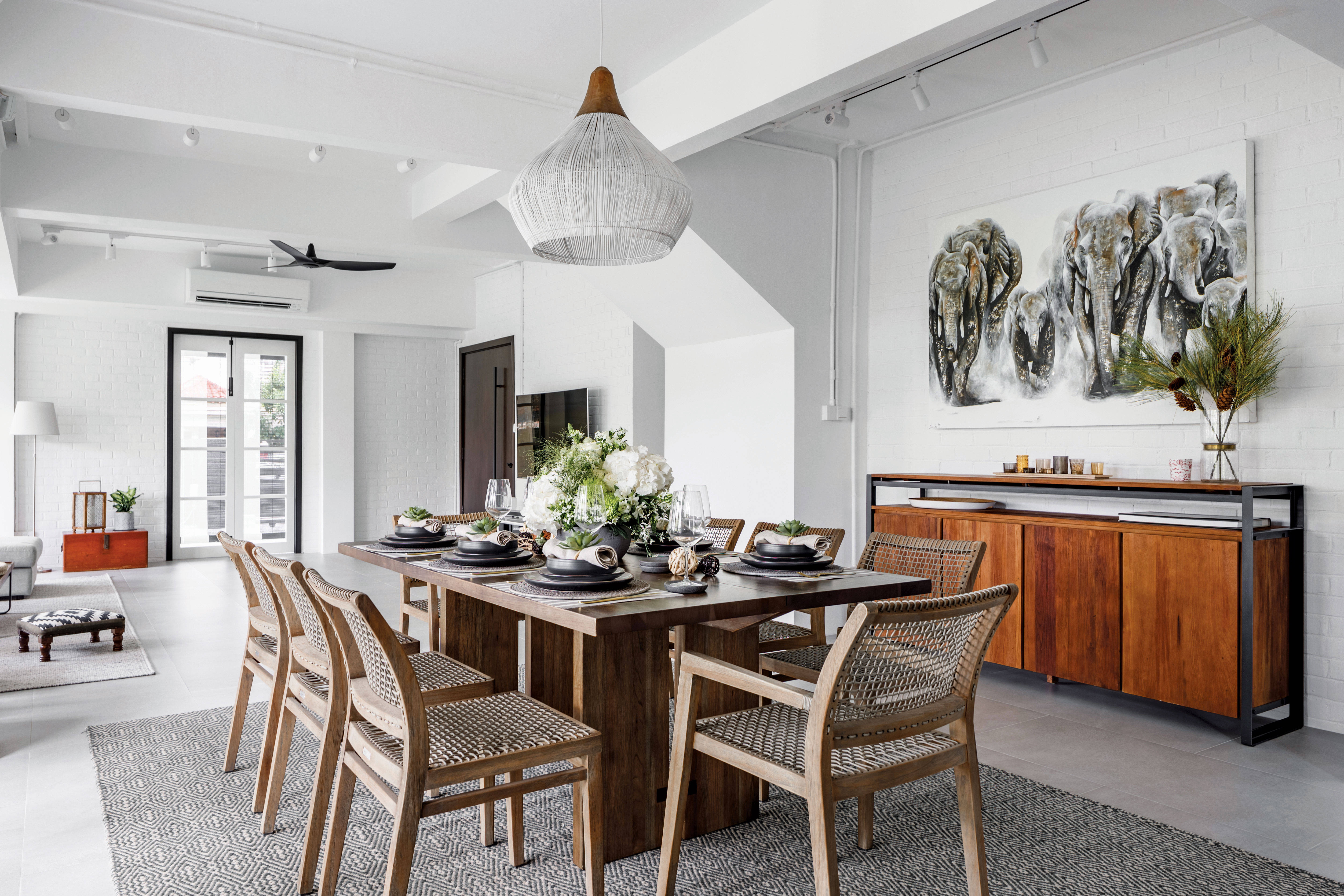 Bright and airy, this expansive home has been designed to capitalise on the full-height windows and deluge of natural light. At the same time, the design team wanted to retain the house’s colonial roots. This was achieved with a monochromatic black-and white palette that acts as a backdrop to the subtle South African influences, and was complemented by textured surfaces, geometric patterns, dark wood furniture and rattan accents.

The living room exemplifies this safari chic design directive. It’s clear that the colonial-style French doors and windows are meant to bring the ‘wow’ factor. As such, the designers have allowed the architecture to stand out, while complementing the look with wooden furniture, shades of greys and soft textures. Similarly, the open-concept kitchen boasts a colonial influence in its design, accentuated by the stark black-and-white colour scheme. 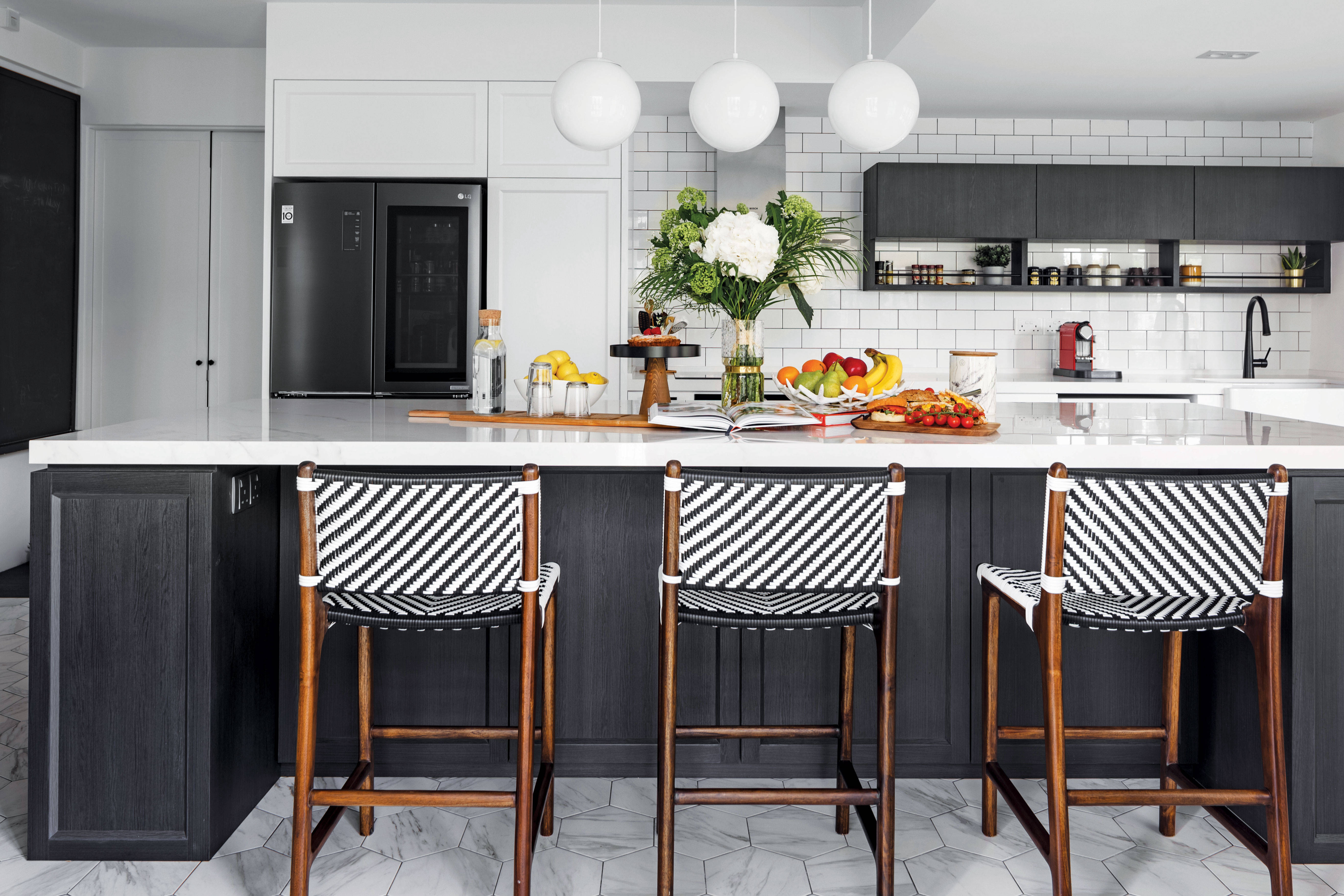 The design of the bedrooms, bathrooms and powder rooms take their inspiration from the glamping experience. In these spaces, a heightened sense of luxury has been interwoven into the interiors and evokes the sense of being on staycation always. 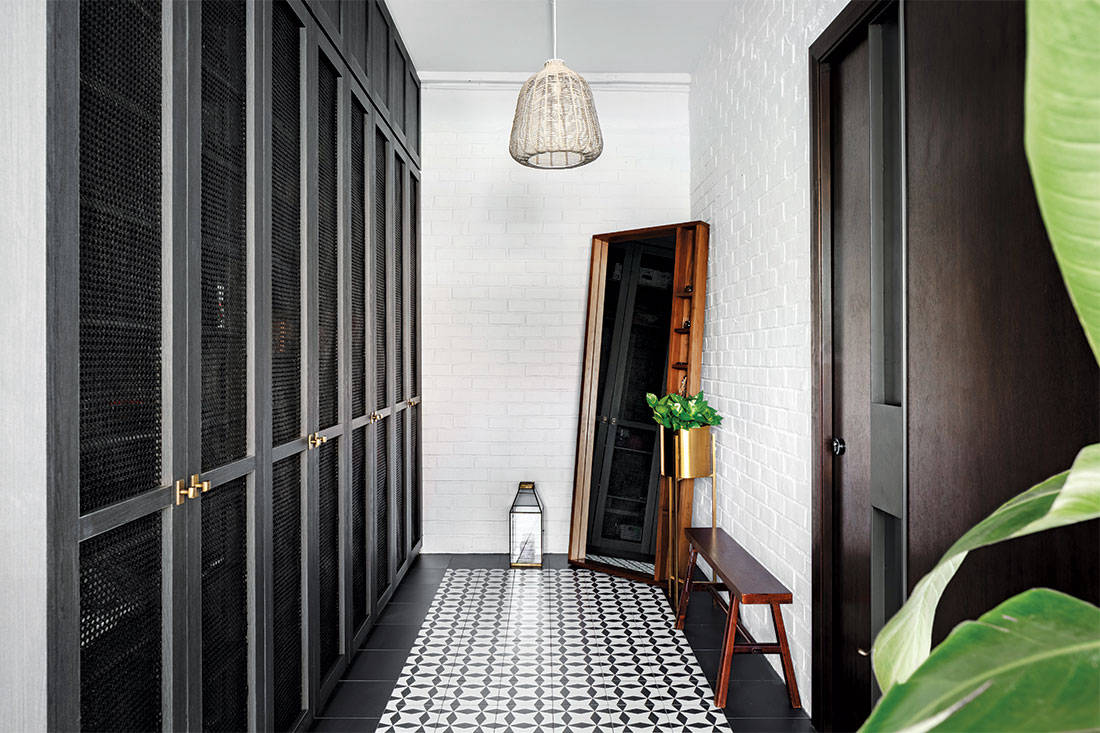 This home’s renovation wasn’t without its fair share of challenges. When they first studied the structure, the designers realised that the entire house was sitting on a slope. As such, no two walls were levelled and the height of the house from front entrance to back had a difference of 200mm. To rectify this problem, the designers adjusted the doors in this house, making sure that when viewed at eye level, all the horizontal and vertical datum are consistent. Now, the carefully planned proportions of the full-height French doors lend gravitas to the home, while encouraging a classic European flair that alludes to more opulent times. 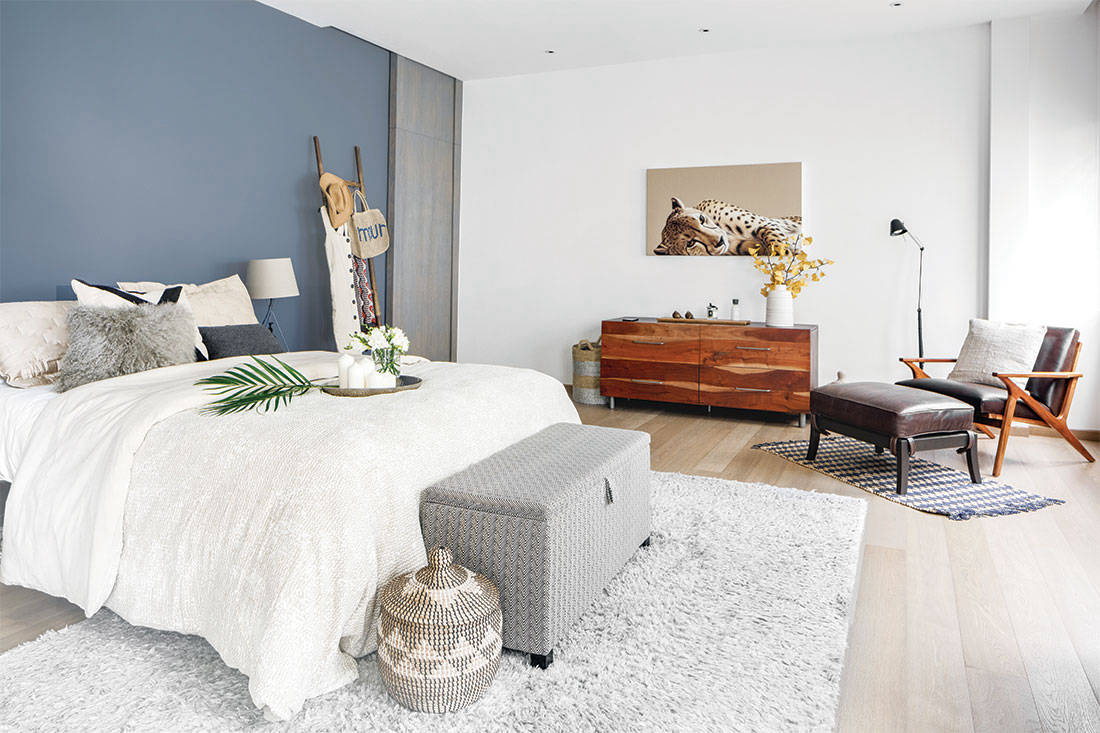 When it came to the interior design, Haüs Atelier played with visual and tactile textures to emphasise the contemporary colonial narrative. This includes the patterned floor tiles that demarcate each room and the linear design of the doors and windows. Especially of note are the soft furnishings like the rugs and throw pillows; the designers specifically chose gentle patterns that were reminiscent of tribal prints. 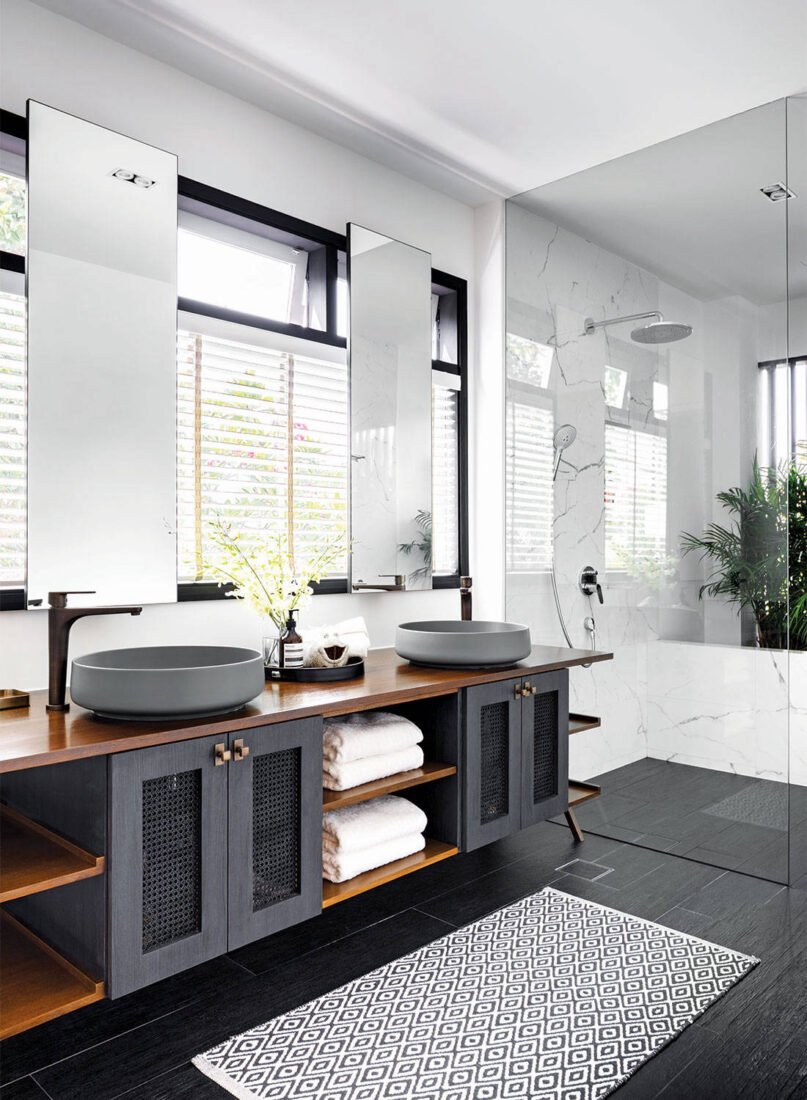 This look of South African safari chic continues with the custom furniture. Each piece of carpentry has been meticulously designed to incorporate rattan weaves in its construction. This can be seen on such elements as the cabinet fronts of the bathroom vanity, the backs of the dining chairs and the panels on the shoe cabinets.

With the authentic way in which it has been put together, living here is truly like being in perpetual staycation mode. 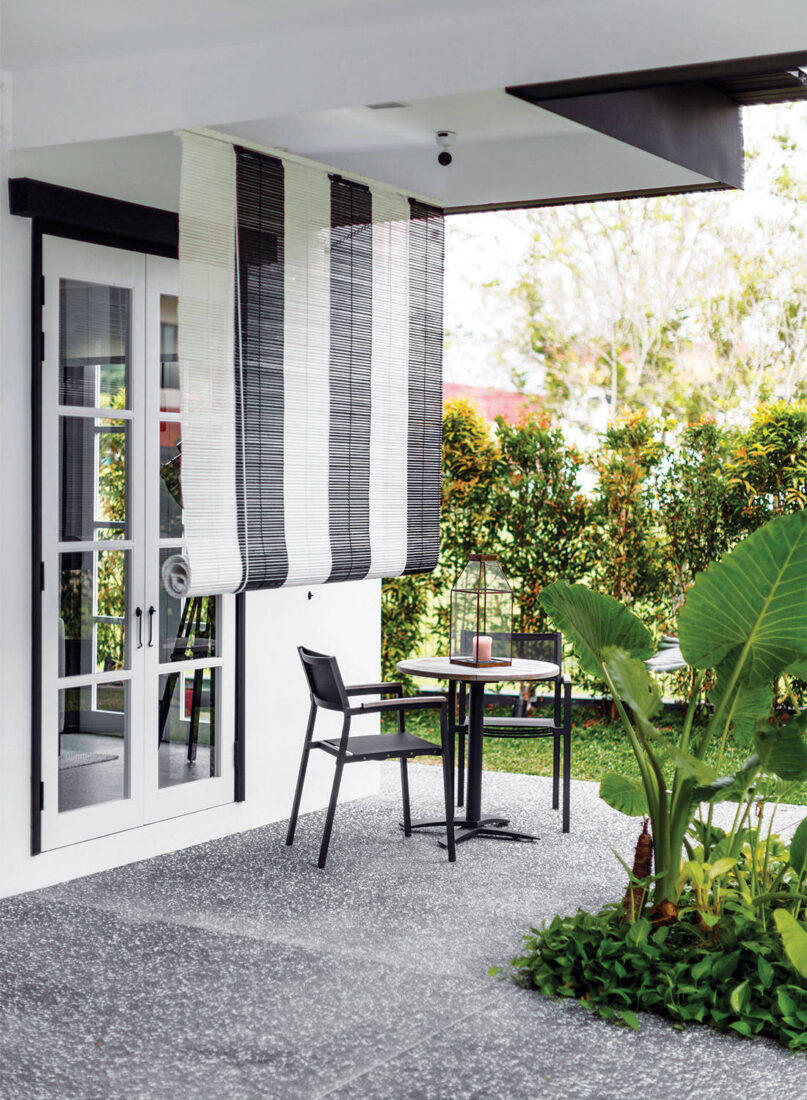 This home was the named “Outstanding Landed Home” in the 2019 Lookbox Design Awards.

Where To Shop
Brass knobs on rattan doors from Lavavella
OH, Deer! Wallpaper in kid’s room from anewall
Carrara Hex tiles on kitchen floor by Codicer from Soon Been Huat
Cognac washbasin in bathroom by the Artceram from Bathroom Gallery

We think you may also like Stylish apartment with coastal vibes