Rather than rebuilding from scratch, akiHAUS Design Studio has improved the design of a terrace house, and made it a sensible and elegant family home.

Having purchased this 30-year-old terrace house in Sennet Road, a couple with three children had to make a big decision – to tear down and rebuild the property from scratch, or make design changes to the existing home. Importantly, they were unsure if the house, with its existing internal layout and architectural details, would suit the needs of a young family.

Following site visits and careful deliberation, Lawrence Puah, founder and design director of akiHAUS Design Studio, decided that the terrace house had design potential, and with modifications, could be made into a comfortable home for his clients. “Most homeowners don’t realise how much it costs to rebuild. After studying the property, I decided that it was enough to meet their needs,” shares Lawrence.

Terrace houses tend to have the reputation for being narrow, cramped and dark. This home faced a similar issue, and so a key priority was to make it spacious and light-filled. The other goal was to optimise pockets of space in order to accommodate the family’s storage needs.

The ground floor comes with a split level. The living area is set in the lower section, and the dining area in the upper, and this separation made for a compact and rather anti-social communal space. Raising the floor such that the living and dining zones sit on a level plane might have solved that issue, but would have created the need for steps between the living area and front terrace, not to mention reduce the ceiling clearance. Both of these were not ideal scenarios. 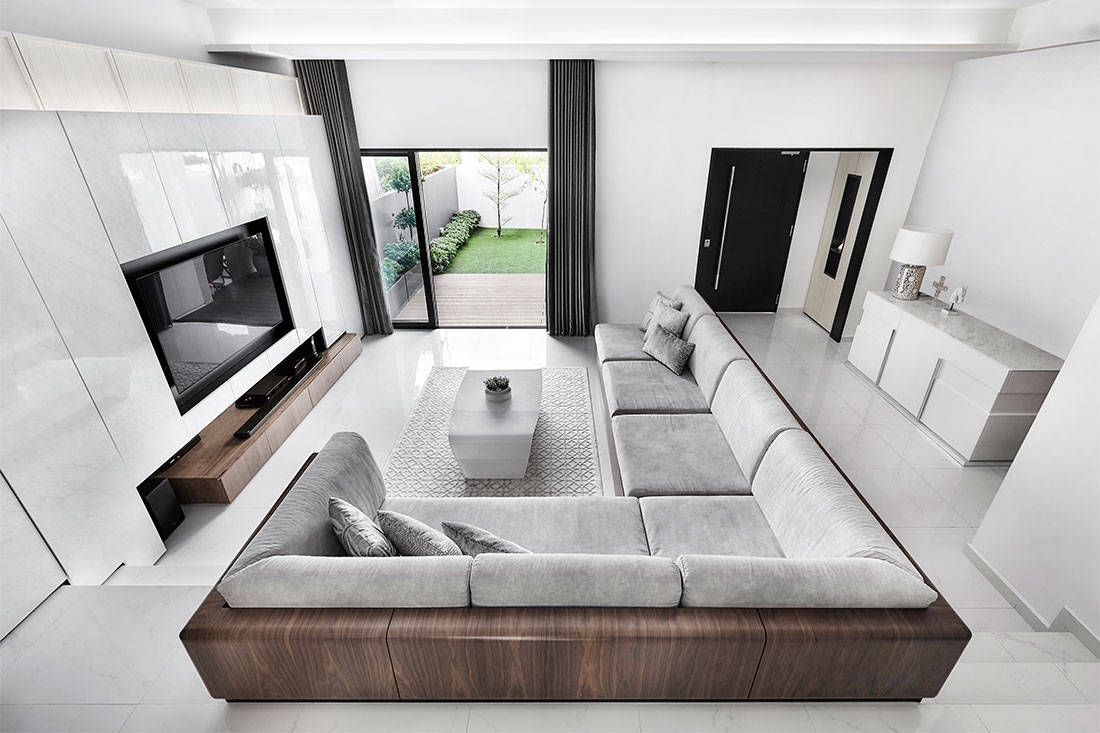 Lawrence’s solution was to build a platform in the living area. This reduced the difference in floor levels between both spaces to merely 350mm. He then expanded the living area into the dining zone by way of a custom sofa. “This not only dealt with the existing structural constraints to create a living space that is wider, but the custom sofa also looks as though it was built into the home,” says Lawrence. Given the way it is designed, the sofa also serves as a safety barrier, and the glass partition installed by the previous owner has therefore been removed. 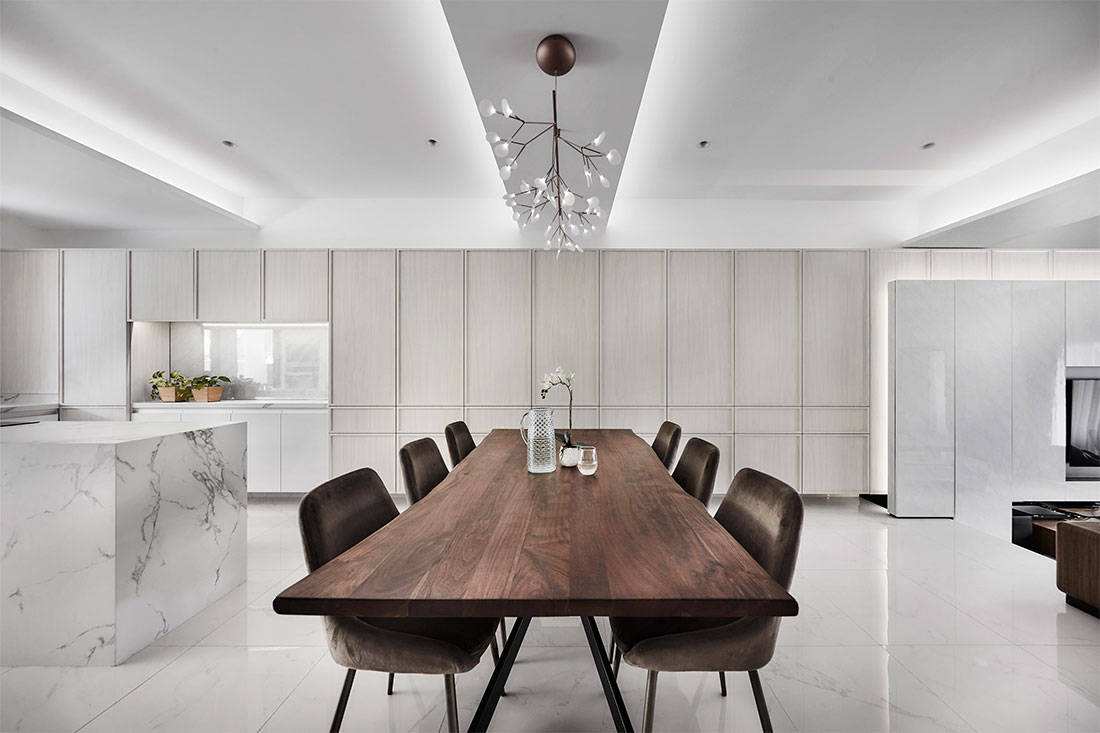 The storage needs of a five-member household are well catered for with full-height storage units on the first level that span the entire length of the house.

When it came to the aesthetics, the female homeowner loved the elegance of classical style, but was uncertain about having Victorian mouldings in the home. The design team’s response was to bring an air of sophistication into the space with pared down details and the use of light timber and marble-effect laminates. This simplified aesthetic also successfully creates a brighter and more spacious interior. 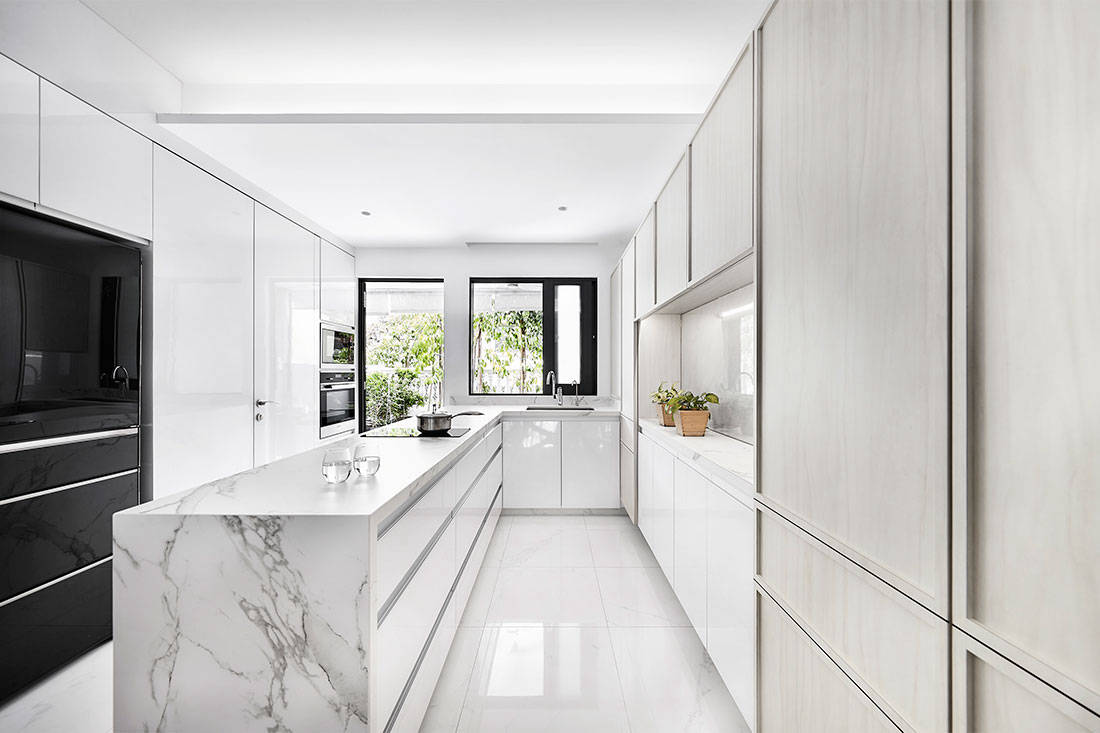 The property’s pre-existing structural beams were another site condition to be tackled. For instance, the first floor had beams of varying heights and at odd locations. This has been addressed with cove ceilings that artfully conceal the unsightly structures while illuminating the home with soft cove lighting. 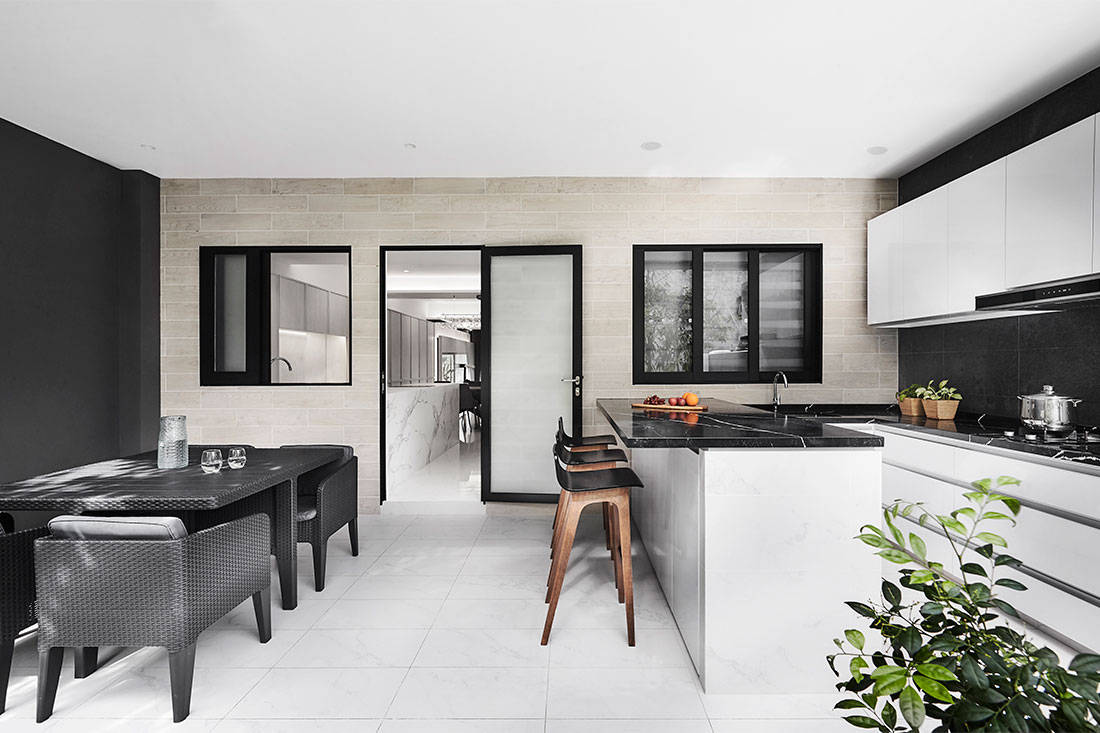 Beams also proved to be a tricky issue on the second floor, with one situated above the balcony door. The designers resolved this with a beam box-up along the two longer walls to achieve better symmetry with a perimeter of beams encircling the study. Lawrence notes that this makes the beams appear as though they have always been part of the home’s architecture, “rather than simply sticking out like sore thumbs”. 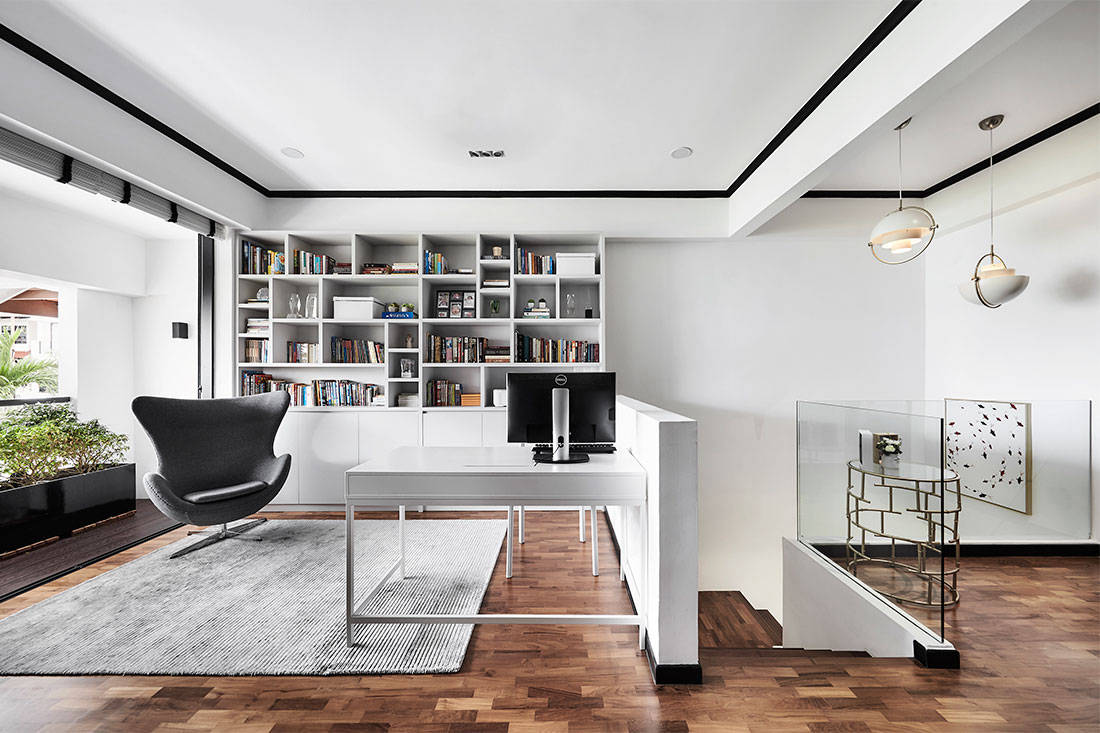 The original layout of second level also posed several challenges. For one, the master bedroom was too long and narrow. Seeing the potential to create an extra study area, the designers made the decision to shorten this suite, such that all three bedrooms could be housed on the same side. This effectively freed up the bedroom next to the staircase, and the space could be converted into a bright and open area for work. The second level foyer is now a lot more welcoming and a stark contrast to how dark and constricted it had been before. 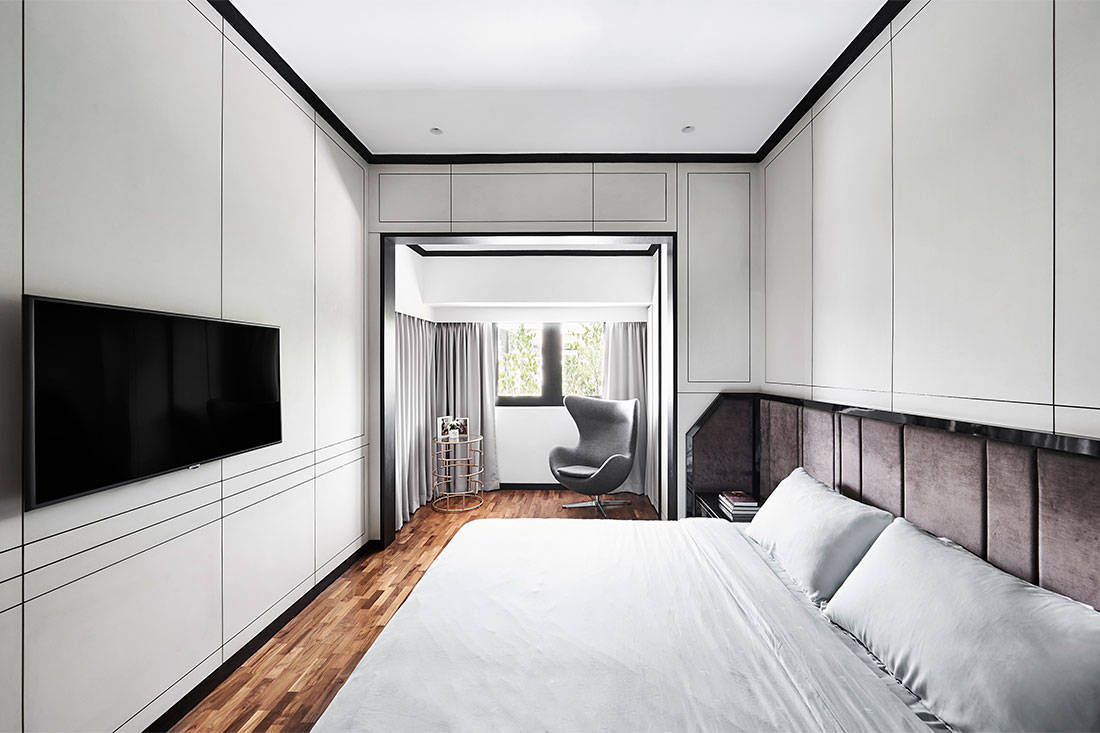 Importantly, despite being shortened, the master suite is still a generous space and boasts a cosy reading area that was once a balcony. The couple can relax here and catch a bit of sun during the day, or draw the curtains for a warmer and more intimate setting. 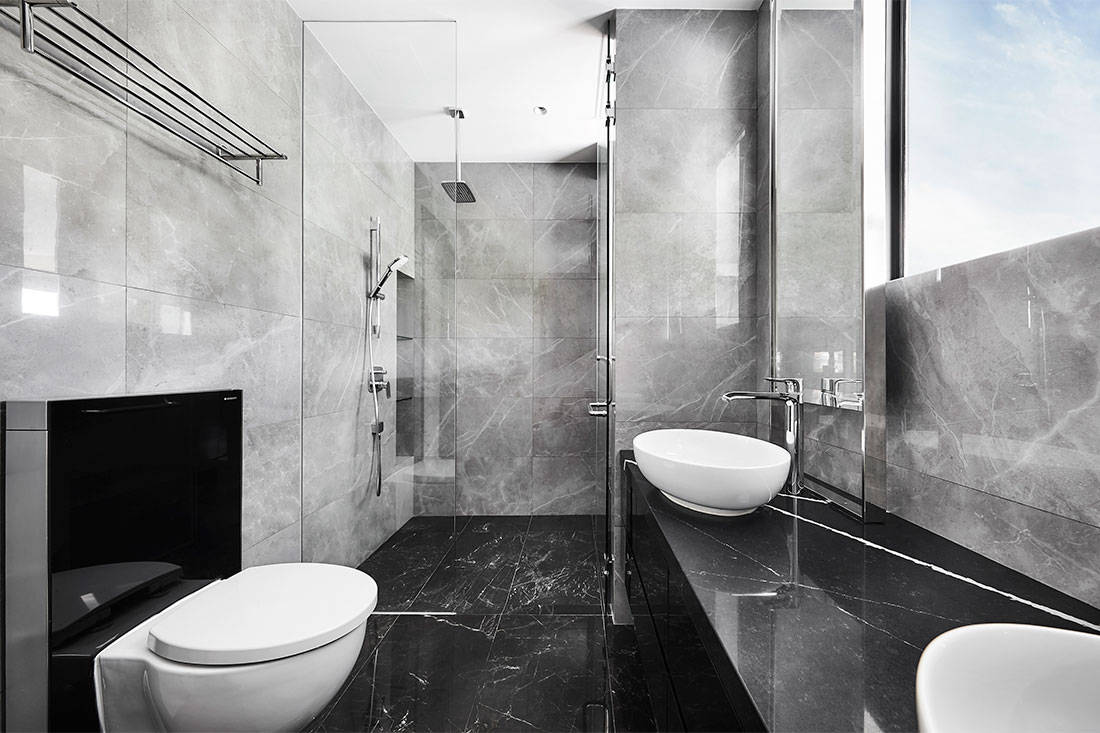 The bathrooms have also been reconfigured for spatial optimisation. The master bathroom is now a large and well-appointed space with his and her sinks, and the common bath, while smaller, is just as striking and no less functional. 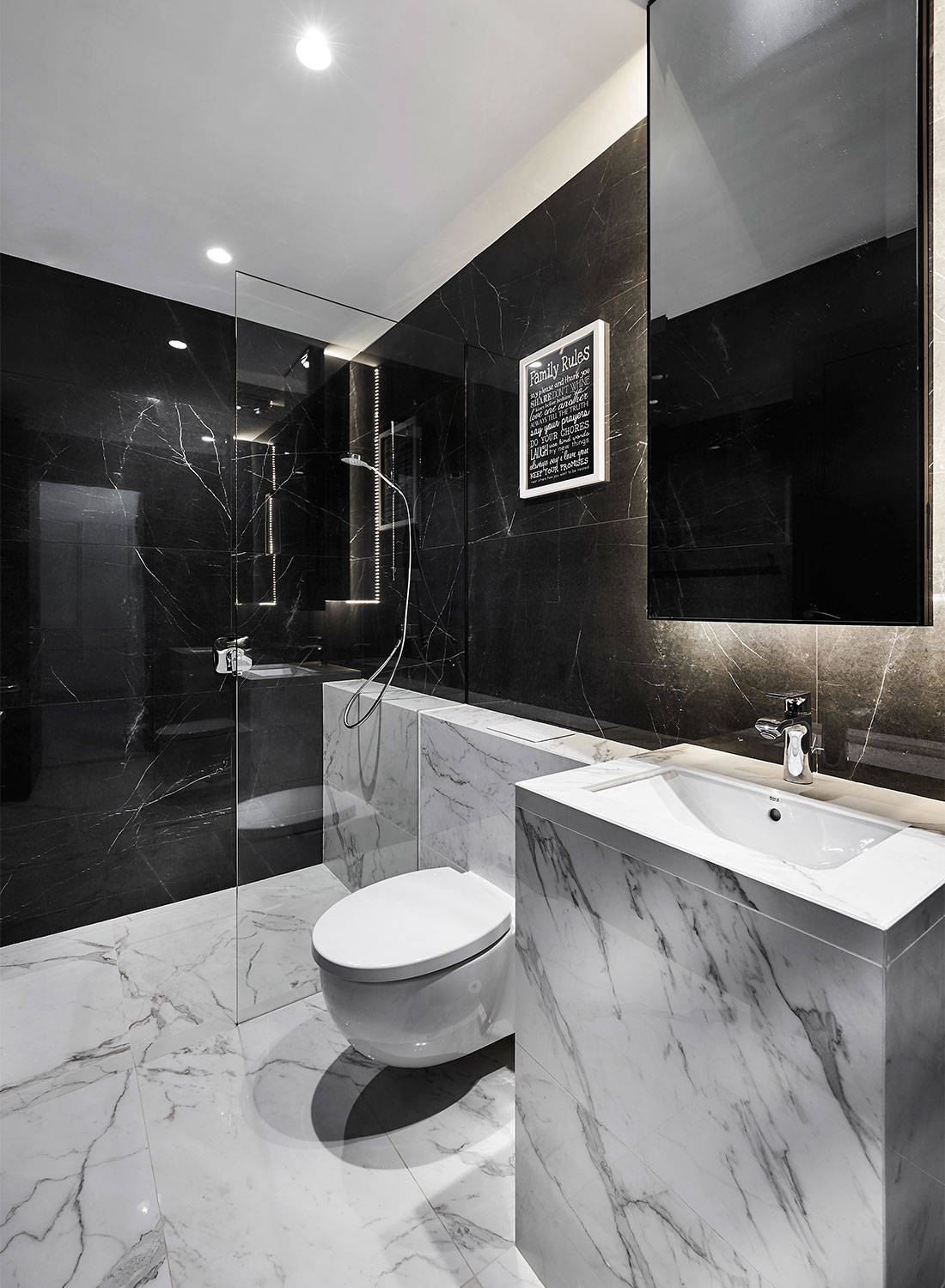 This turned out to be a three-month project – much shorter than what it would have taken to rebuild from scratch. Not to mention the cost savings that could be enjoyed with design modifications instead. By recognising the design potential of this terrace house, and cleverly resolving various architectural issues, Lawrence and his team have made this property a bright, elegant and high-functioning family home.