Expertly straddling tradition and modernity, Vilhelm Lauritzen designed the VL Ring Crown light in the 1940s with a keen eye for practicality as well as beauty. Now Louis Poulsen has re-issued the design classic for contemporary times.

In 1934, when Vilhelm Lauritzen was invited to be a part of the team commissioned to design a new building for the Danish Broadcasting Corporation (known at the time as Statsradiofonien), radio studios were an entirely new form of building. The first public news and entertainment broadcasts over radio had only been made in the USA in 1920, bringing the sounds of the world into the living room – and disrupting the pre-recorded formality of the phonograph with live human entertainment.

The shift within the sanctuary of the private domestic realm must have been felt intensely. “Like aviation and motoring, the radio represented new, modern technology, shortening distances between people and creating a totally new way of existing in the world,” write Vilhelm Lauritzen Architects today. And the design of the Danish Broadcasting Corporation building (Radiohuset) in Copenhagen picked up on this current with a purposefully modern and asymmetrical design. 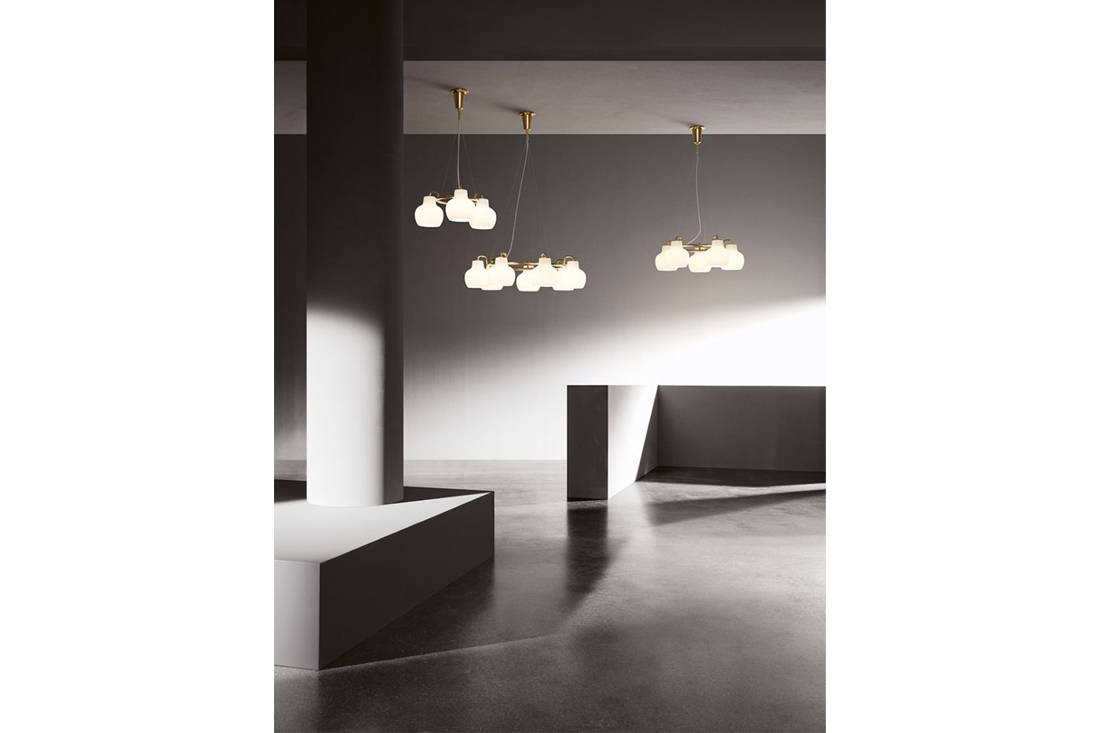 The building, says Vilhelm’s studio, was given “a really rough ride” when its design was published. It was inaugurated in 1945 but it was not until 1994 that its significance was formally recognised with heritage listing. “Since then, all major conversions, renovations, and maintenance tasks have been subject to approval by the Danish Agency for Culture and Palaces,” describe Vilhelm Lauritzen Architects.

Alongside the architecture,Vilhelm also contributed lighting designs to Radiohuset, including the VL38 lamp. Wall lamp and pendant versions of what we now know as Louis Poulsen’s VL Ring Crown were also installed within the mahogany-rich interior, their white opal glass shades creating striking outlines against the dark timber. 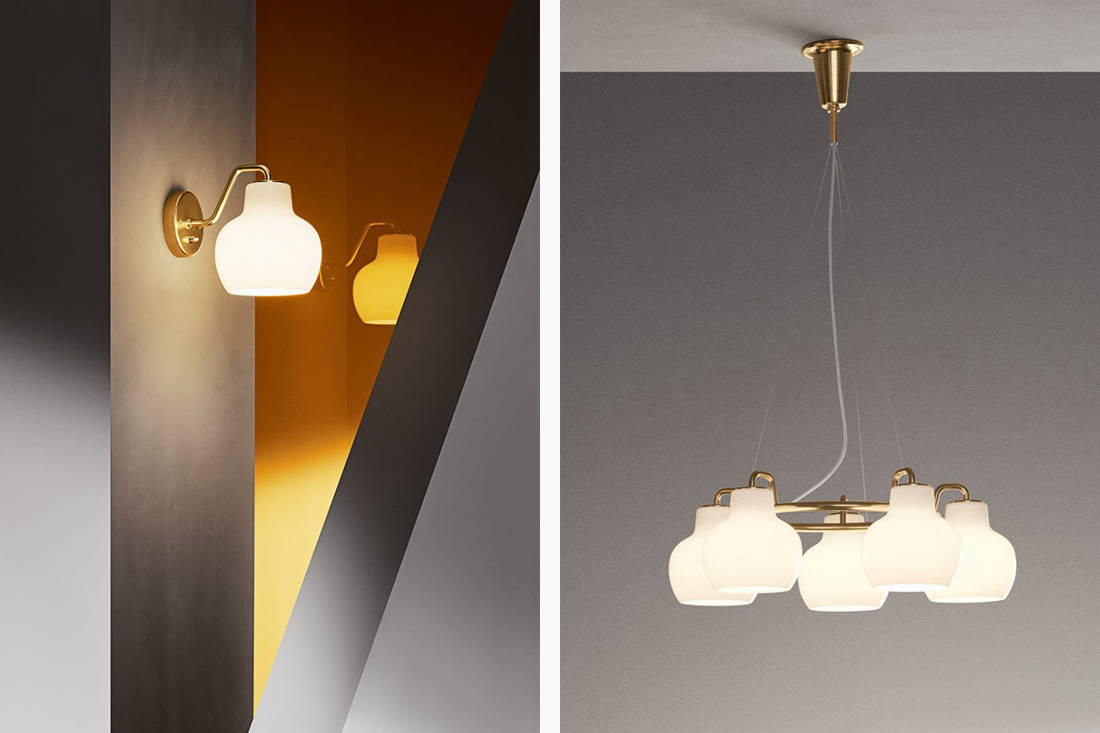 The young architect Finn Juhl was working for Vilhelm at the time, and soon after the completion of Radiohuset he incorporated the VL Ring Crown in an award-winning interior he created for the flagship store of Danish porcelain manufacturer Bing & Grøndahl in Copenhagen in 1947. This was the first time VL Ring Crown had been used in its multiple-shade format, which had in fact been designed at the same time as the wall lamp and single pendant versions.

Vilhelm received plenty of orders for the VL Ring Crown, perhaps owing to its fusion of a satisfyingly simple organic form with deep consideration for practicality. Imagining the VL Ring Crown in the context of the Radiohuset ­– which had so shaken the community with its modernity ­– it makes sense that Vilhelm sought a lighting form that neither revolutionised in terms of form nor bowed entirely to historic precedent.

VL Ring Crown has a distinctive bulbous shape that emerges from a cylindrical neck with glossy white triple-layered, mouth-blown opal glass offering warm light and soft illumination – anti-glare, of course, in line with the Louis Poulsen way. Its untreated polished-brass hanging structure supports three, five or seven shades. Every part of the design bears a purpose. 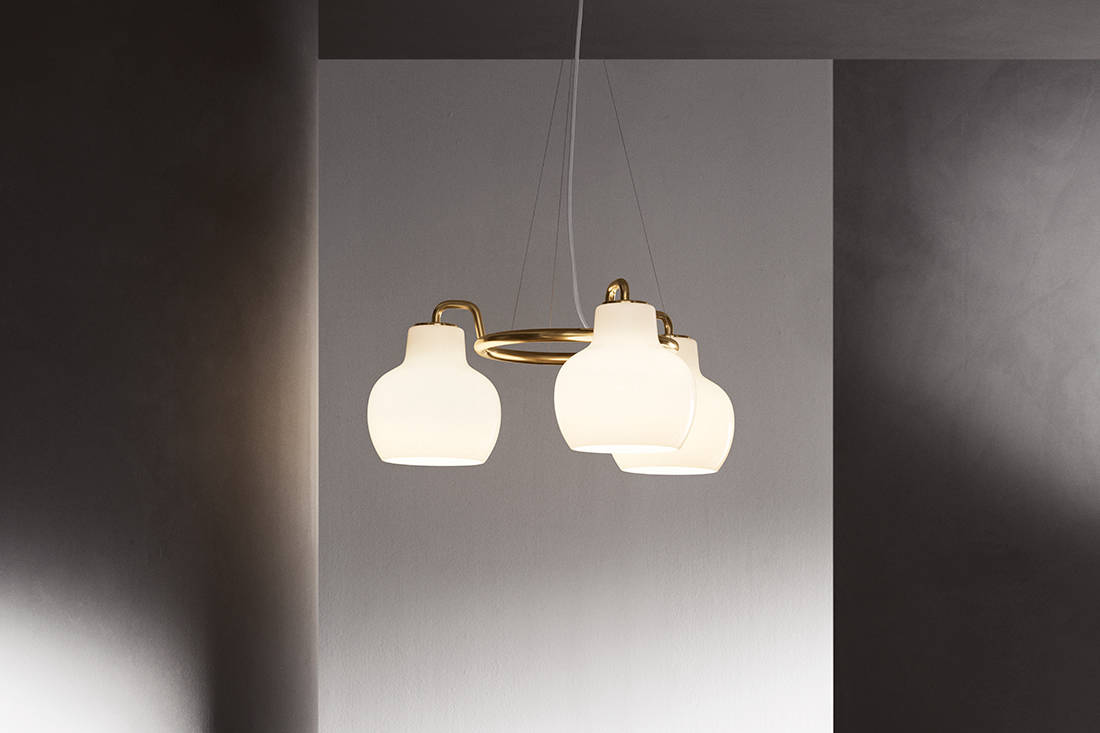 As Vilhelm later described to Poul Henningsen in Louis Poulsen’s magazine NYT in 1953, he had some straightforward intentions with VL Ring Crown. Vilhem said: “It should be easy to dust, not collect dirt at the bottom, not break in one go if damaged, be easy to change the bulb, be as glare-free as possible (without dimming) and be available for downward lighting and for evenly rounded light as needed. And it should look neat.”

Practical, glare-free and neat, VL Ring Crown brings not only a distinctive look to contemporary interiors, but also gentle light that rings true to the Louis Poulsen emphasis on human experience – no matter the spatial context.