7 stunning walk-up apartments in Singapore to steal ideas from

See how these old walk-up apartments in Singapore have been superbly transformed into unique and unforgettable living spaces.

Are you drawn to the charm, history and architecture of walk-up apartments, and is it your dream to own one?

As the name suggests, walk-up apartments are only accessible via staircase – a down or upside depending on how you look at it! They tend to be old and can come with their own set of surprises during renovation. These could incur extra costs. Many (like those in Tiong Bahru) are also conservation buildings, which means there are various URA guidelines that have to be adhered to.

But such older apartments also tend to be larger than their condo counterparts. Many are also freehold which could make them a good investment.

If you’re looking to purchase one, here are seven great walk-up apartments to inspire you, reno tips included.

#1 A move most radical 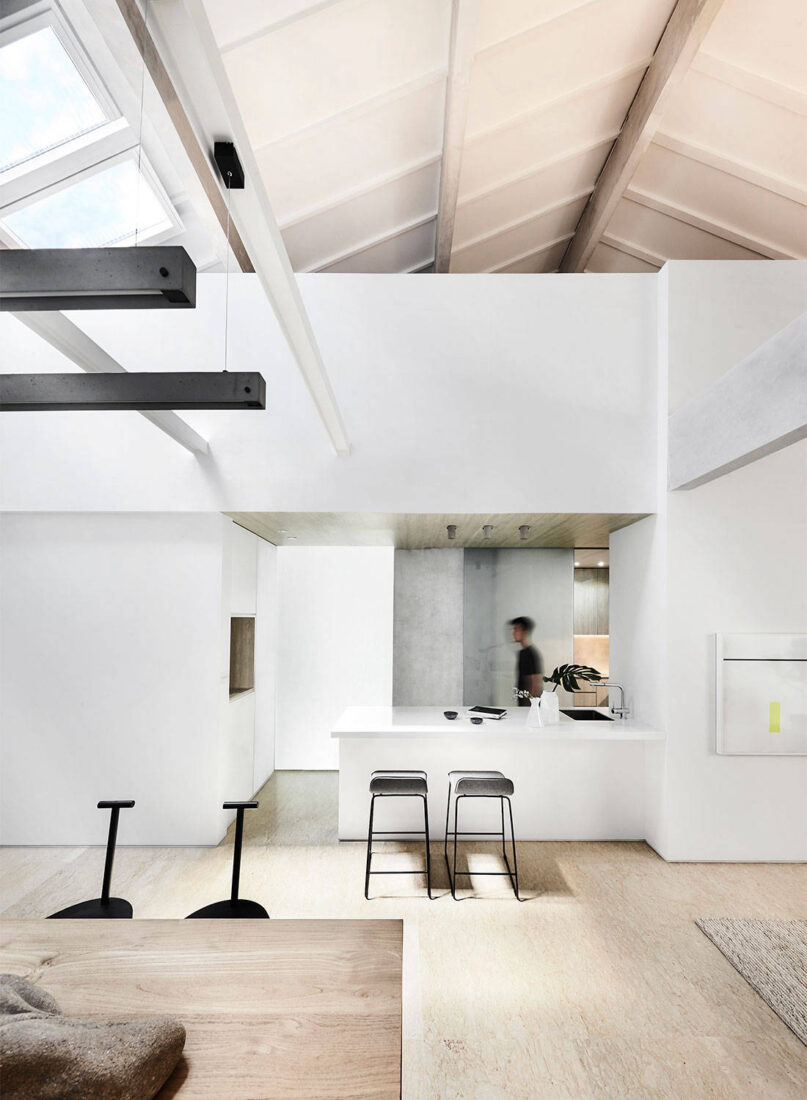 When the owners returned to this 40-year-old apartment after an overseas work stint, they needed for it to undergo a major renovation to meet the needs of their expanded family. 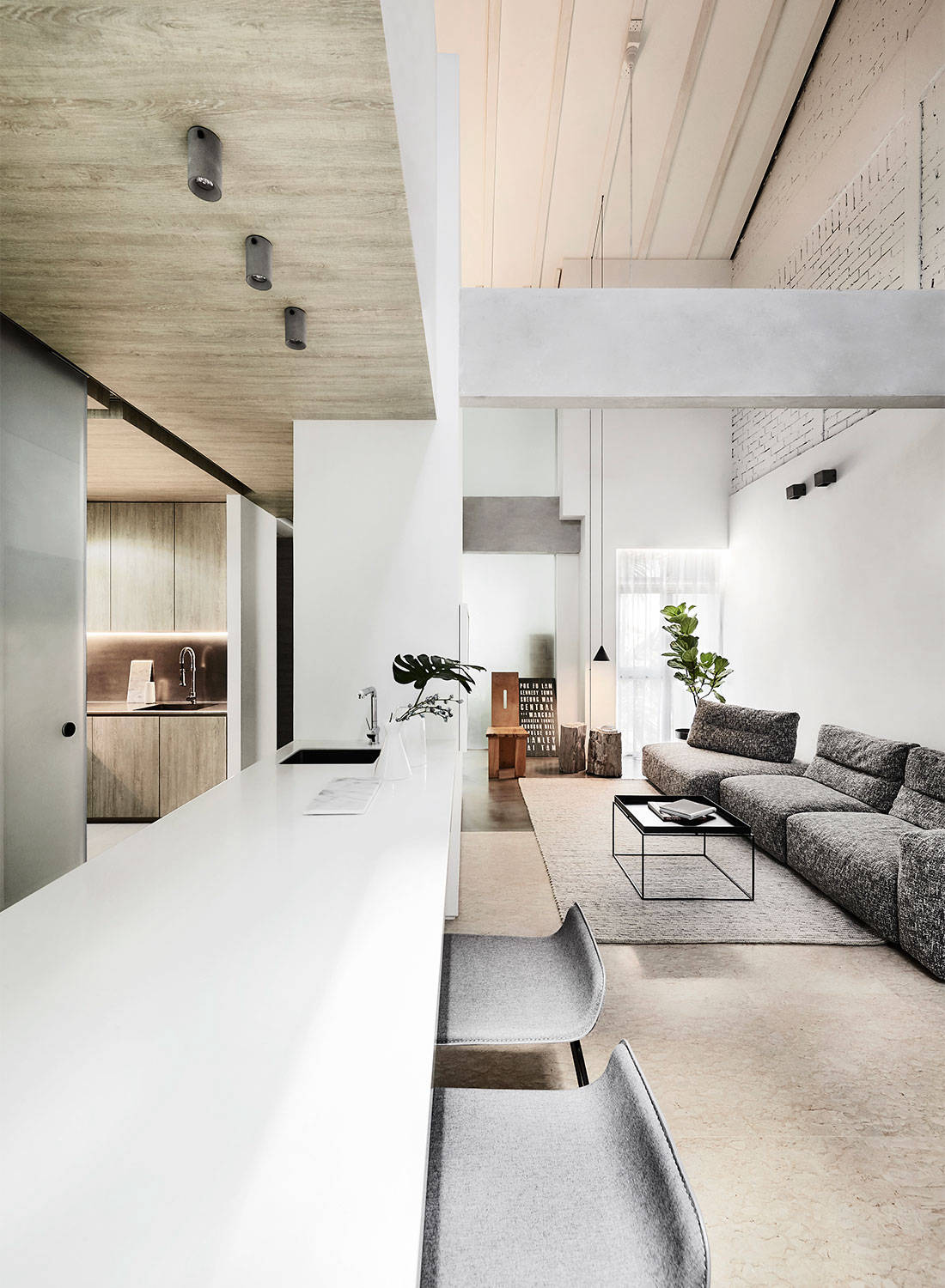 UPSTRS_ has redesigned this top floor unit as a predominantly white space that is airy and pristine, and with a pitched roof for a lofty appeal. The former two-bedroom unit has been transformed into a three bedroom apartment with a helper’s room. There’s now also an open kitchen attached to a wet kitchen, a separate yard space, and plenty of storage insertions. 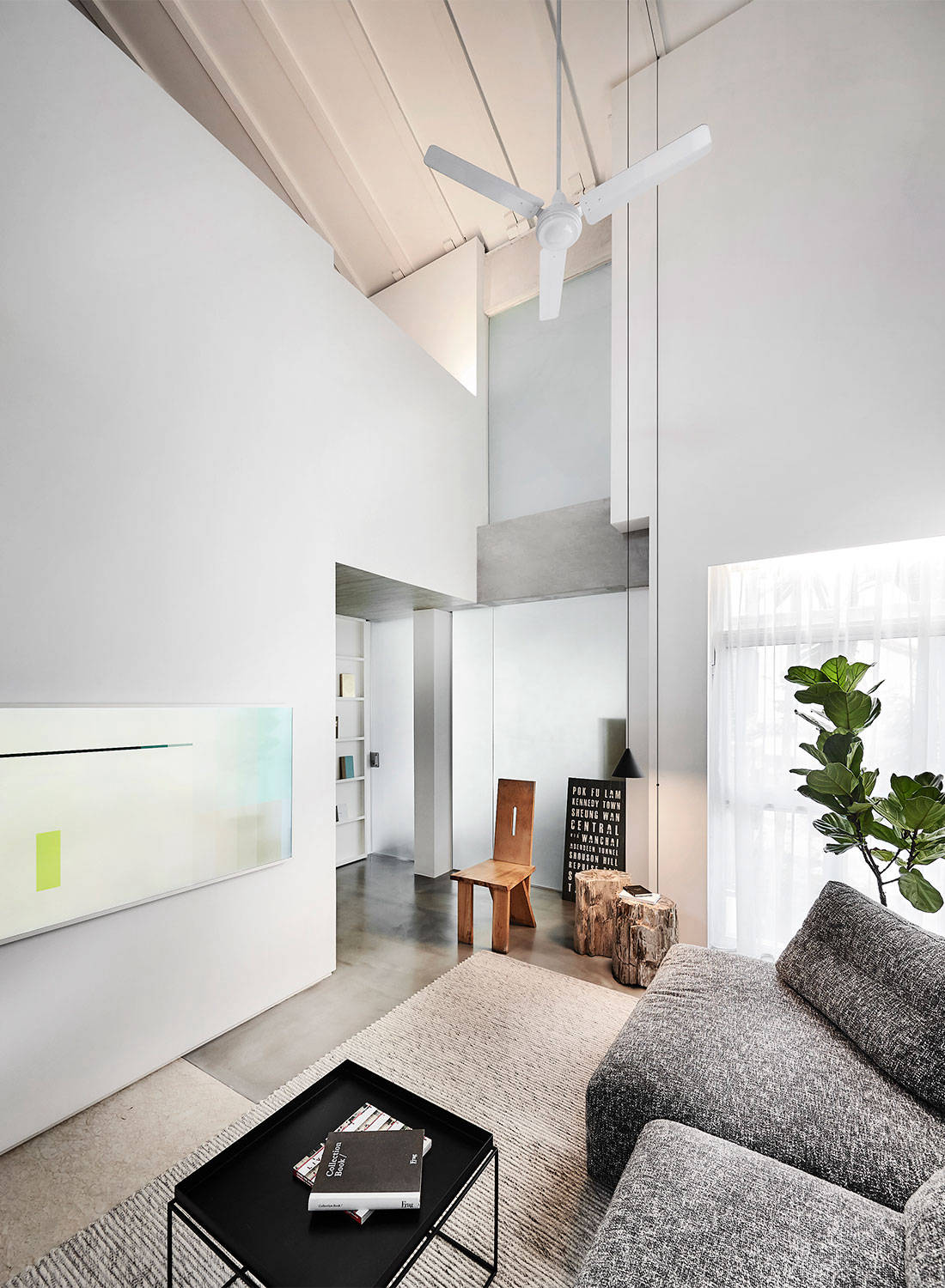 It was a technically challenging project, admits designer Dennis Cheok. “Spatially, we completely flipped the existing layout from the inside out, consolidating for efficacy and allowing the social spaces to take their place at the centre,” he says. A ‘white (loft) box’ was also inserted to consolidate the new programmatic functions. Undulating, elongated and multifunctional, it takes centre stage within the apartment. Even the top of this box structure has been utilised as an additional living space that’s accessible via a hidden stairway. 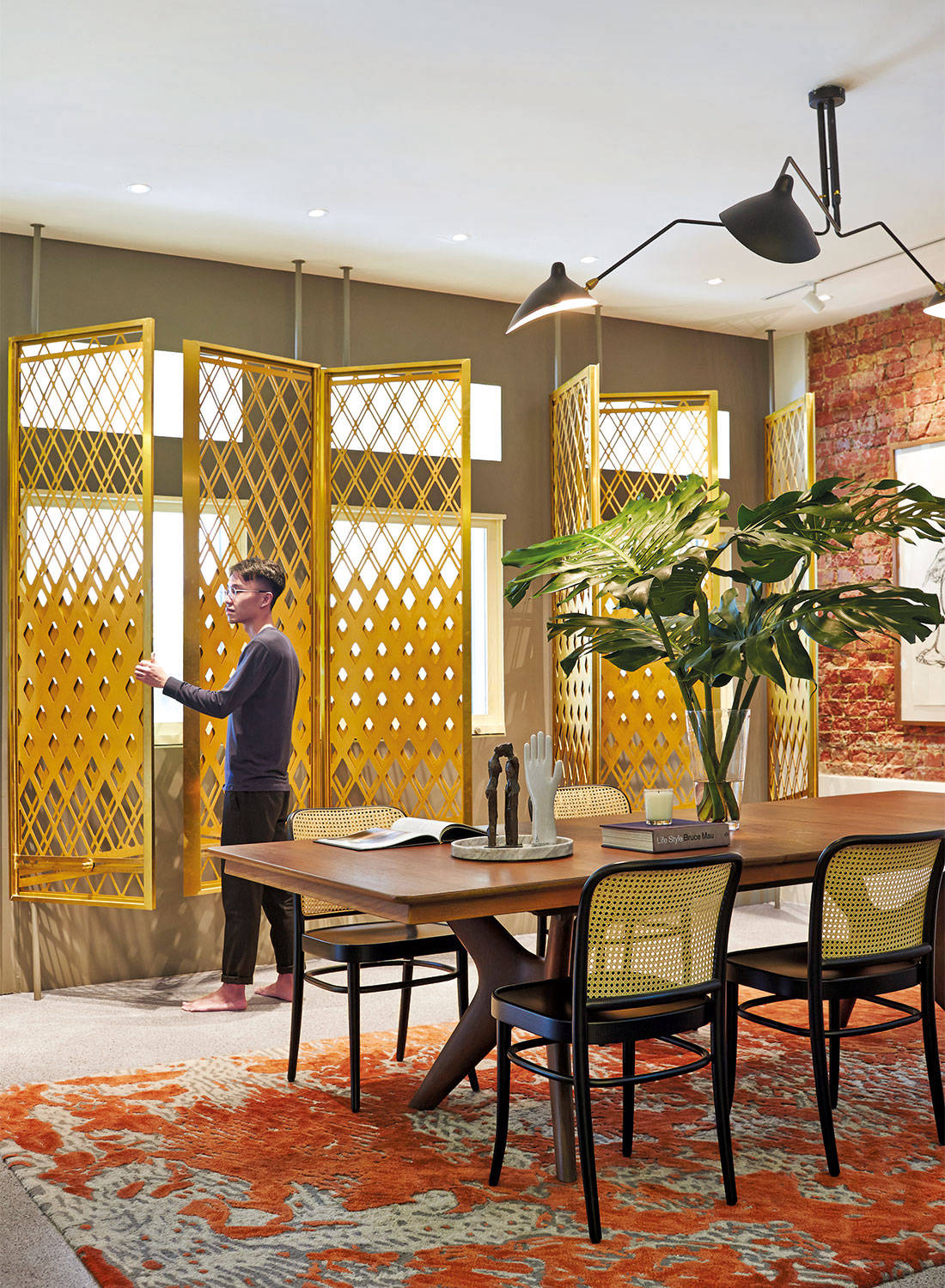 Like many of the units in the neighbourhood, this ground floor apartment is built on a long, narrow lot, which resulted in a labyrinth of disconnected and anti-social spaces. The lack of natural light was also an issue, and the windows facing the public walkway were rarely opened due to privacy.

In response, the designers from asolidplan designed intricate double layered pivot screens behind the custom sash windows, which can be entirely opened or closed like shutters. “The aperture sizes on the brass coloured screen open up at the top to allow more daylight to enter without compromising on privacy,” says designer Quck Zhong Yi. 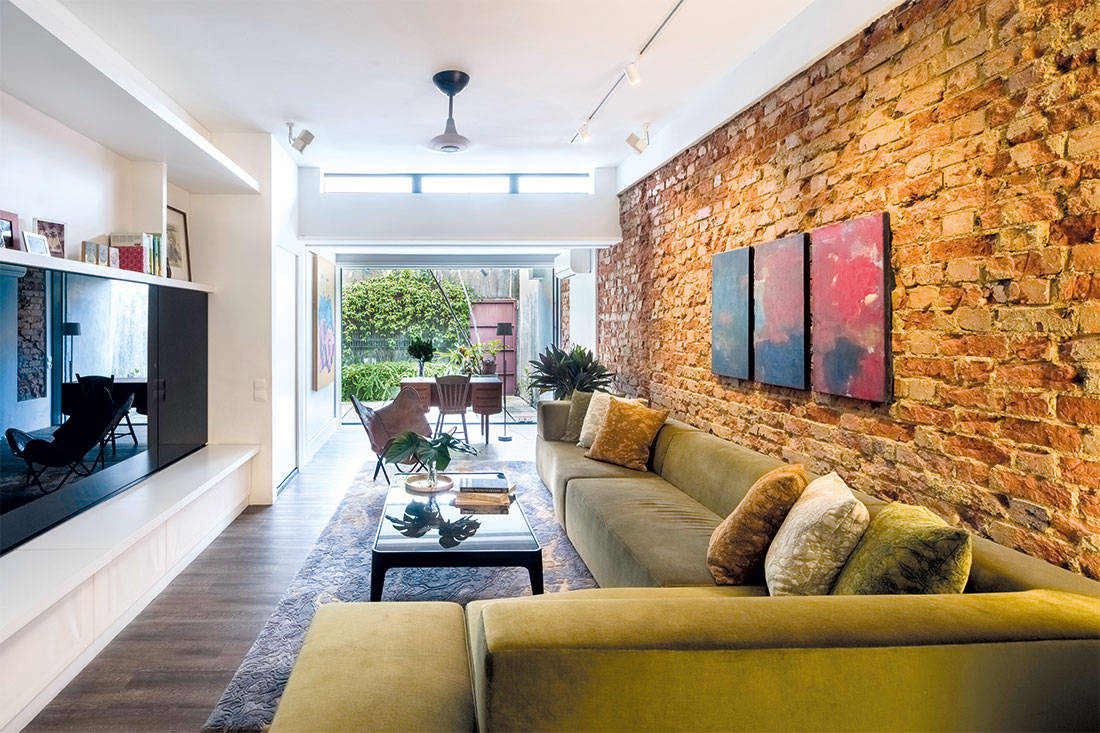 Since the owners entertain frequently, the bar and kitchen is placed at the heart of the home, where the guest bedroom used to be. The original layout came with a lower level at the rear that responded to the site typography. Taking advantage of this feature, a conversation pit styled living room was created. 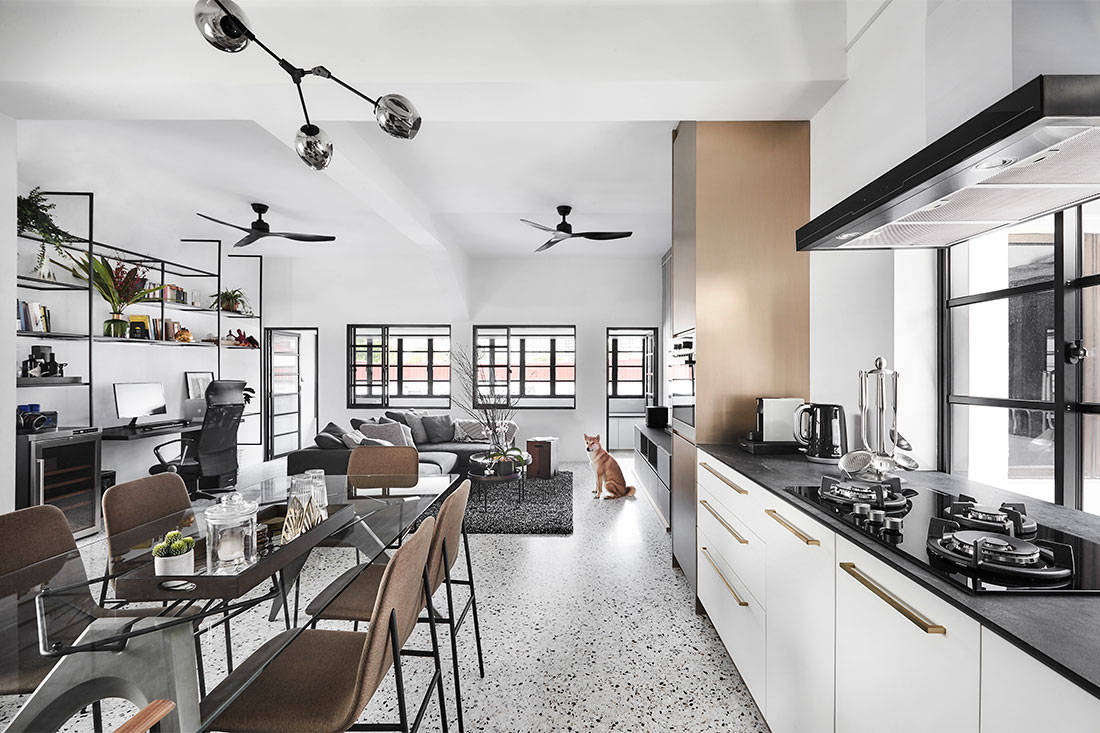 This unit came with bedrooms at the front, and the living hall deeper in. The hall was served only by a small air well and felt dark and enclosed. “The brief was to open up the space, and find ways to draw natural light into the unit,” says designer Edwin Pang of Third Avenue Studio.

A light colour palette was also selected to create an inviting vibe, and terrazzo was the flooring of choice throughout for its durable and easy to clean properties. “The owners didn’t like grouting,” says Edwin. “We decided on terrazzo flooring because once installed, it is almost seamless.” In fact, leftover terrazzo has even been used to construct the sink in the bathroom. 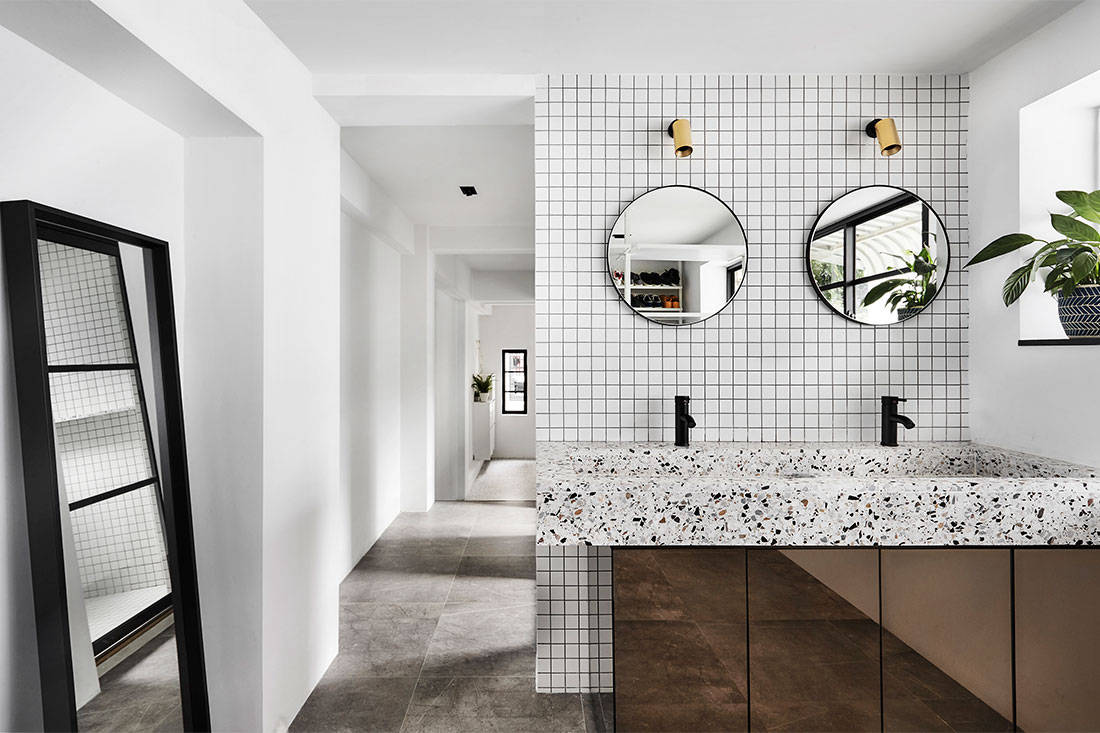 Other unique features include an open wardrobe in the master bedroom that’s set on a raised platform with hidden storage beneath. 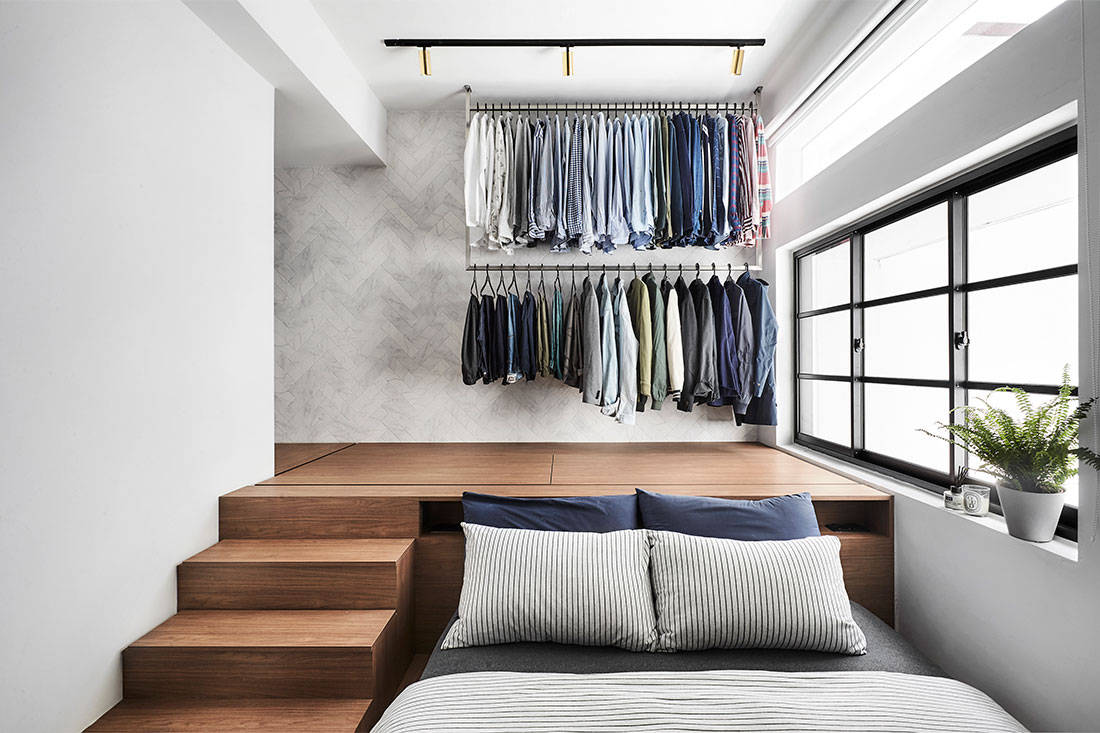 When it comes to renovating walk-up apartments, Edwin has this to say: “The challenge often is to bring light and ventilation into these units where the layouts are usually very long. By opening up the rooms you will end up with a large, well ventilated social space which is very inviting and great for entertaining. Also, clients may want to consider having an ensuite or another bathroom. The bathrooms are usually located right at the end of the unit, so the location of the bathrooms always poses a challenge.”

#4 Two-levels for live, work and play 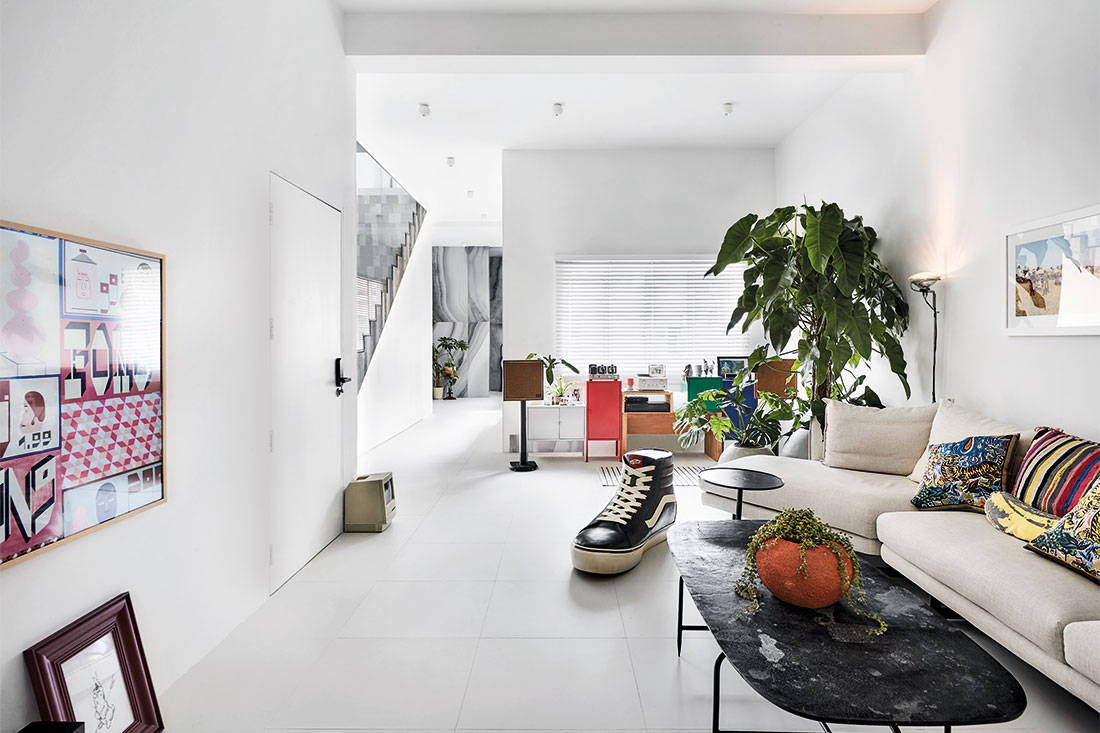 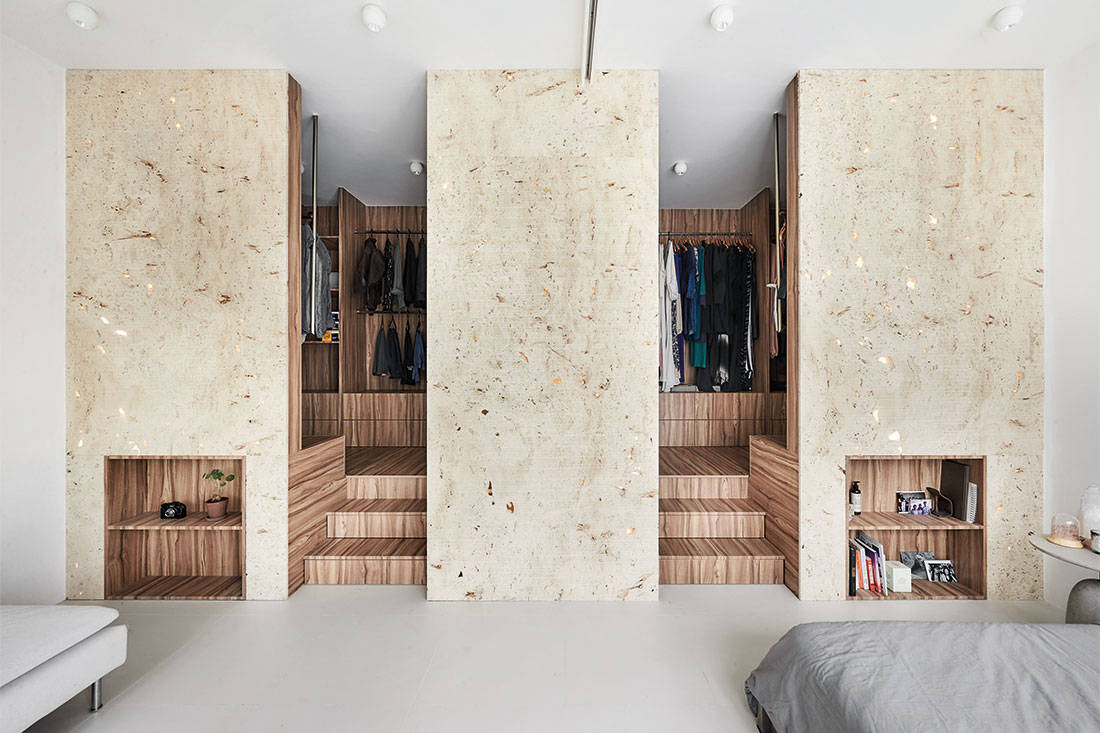 The first level is given to a living area, the master bedroom and a bathroom at the end of the hallway. The bedroom itself is entered by way of a raised walk-in wardrobe that serves as a transitional pathway to the resting quarters. 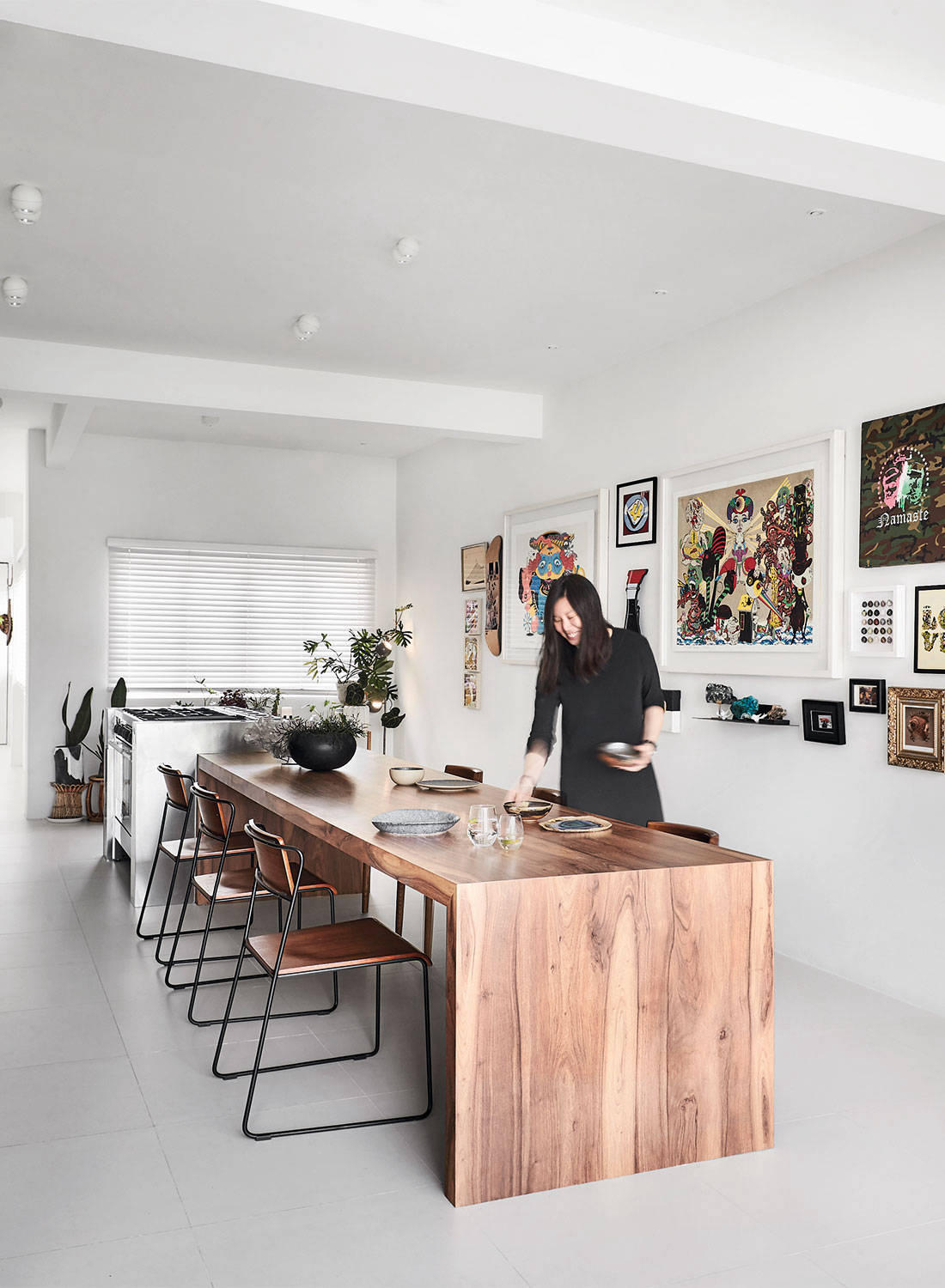 The upper floor has a lofty dining room, a second living area, and a guest bathroom. Anchoring the couple’s fondness for cooking and hosting, the kitchen is the heart of the home with a generous custom-sized table, and an open pantry. This upper floor also serves as LAANK’s office occasionally, where staff can do their work in a more relaxed setting and enjoy home-cooked meals. 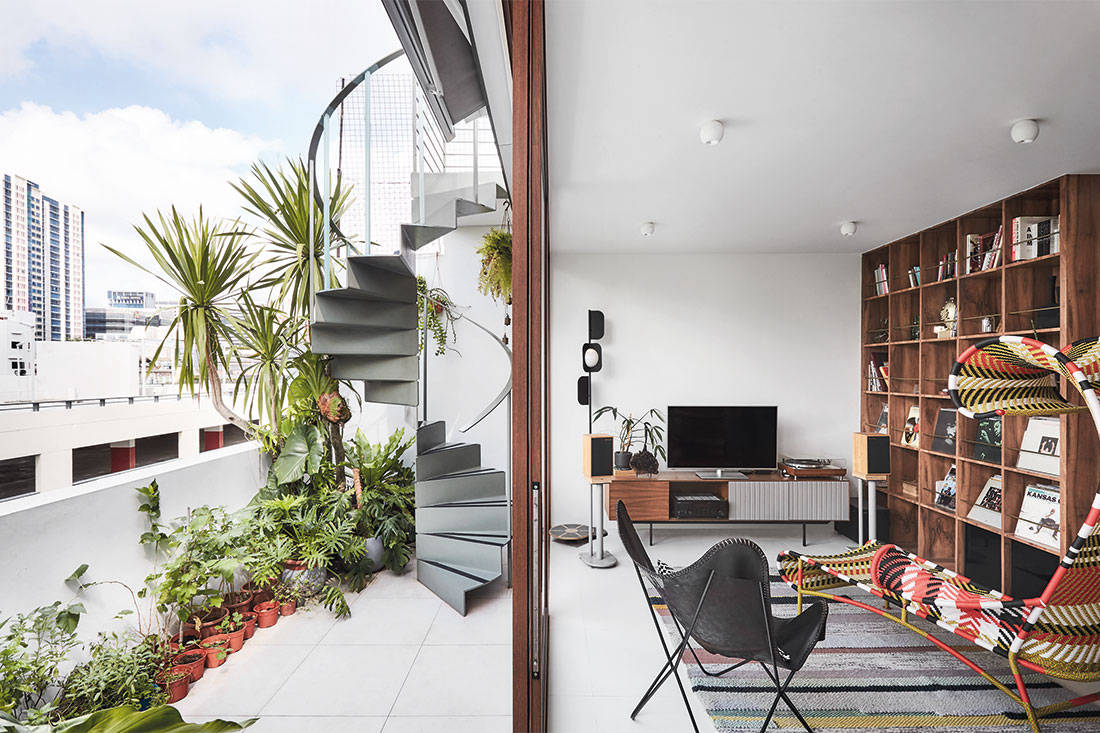 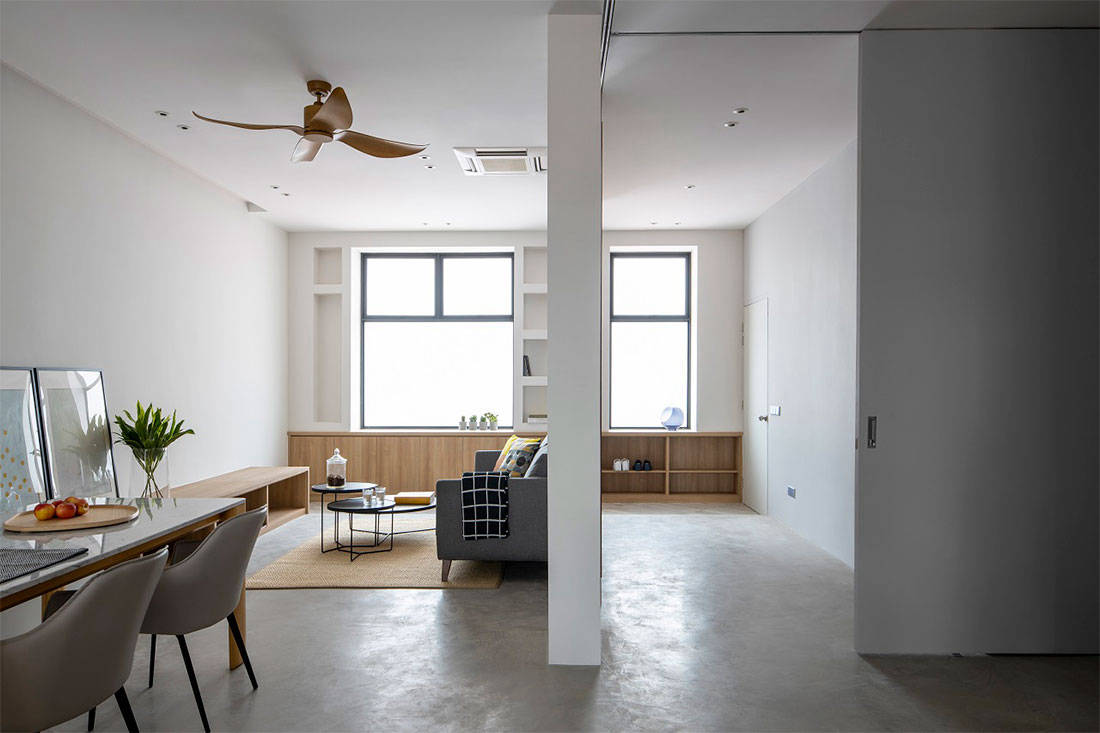 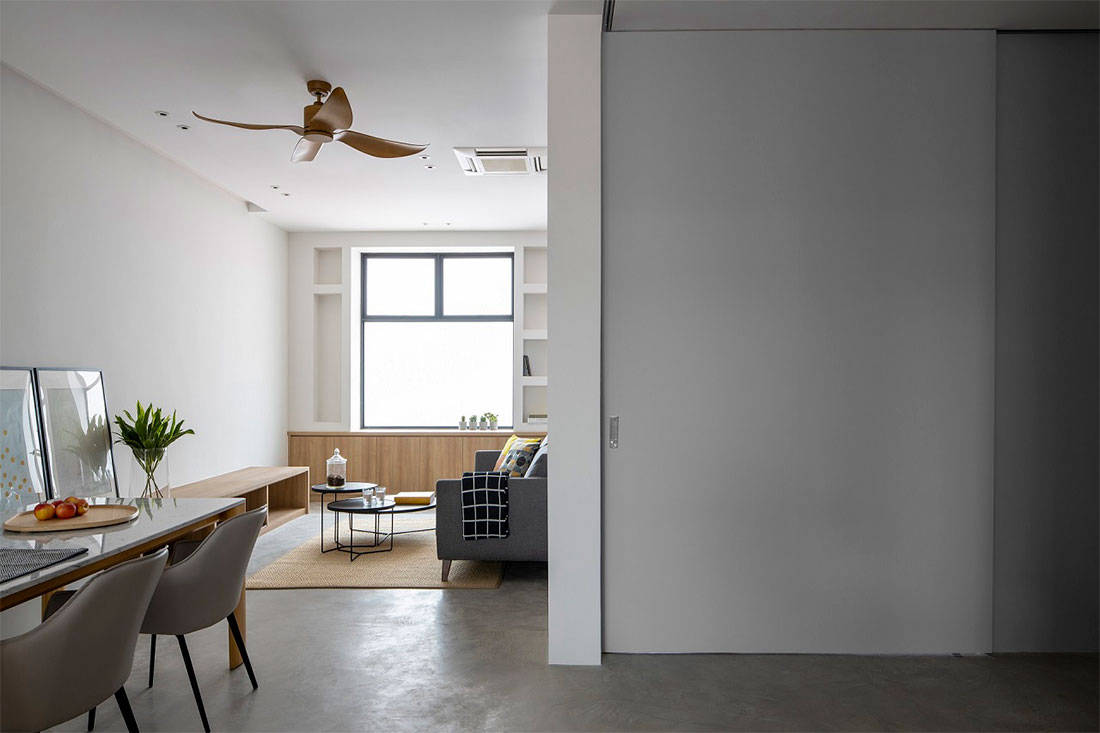 This walk-up apartment’s coolest feature is a flexible guest/play room that only appears when needed. Situated near the foyer and close to the living and dining area, the two movable screens and door can close to form a room and open up when not in use. “The screen has a motif made of oak strips that has been customised for this project. Also, the screens and door are trackless on the ground to ensure that the micro cement floor is seamless,” says Jasment Wong from Design by Fifteen.

This major reconfiguration sees the living and dining area and an open-plan kitchen becoming one single, seamless space. With this move, the natural light source from the front and back of the apartment (which is admittedly limited) is now also optimised. 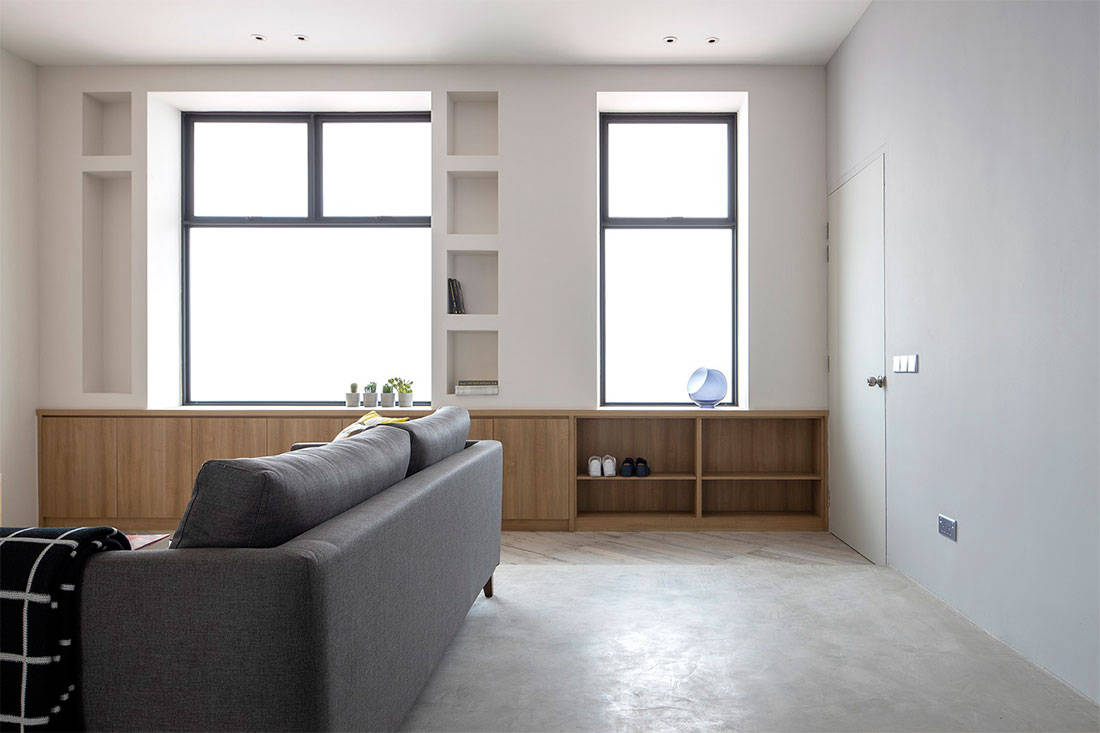 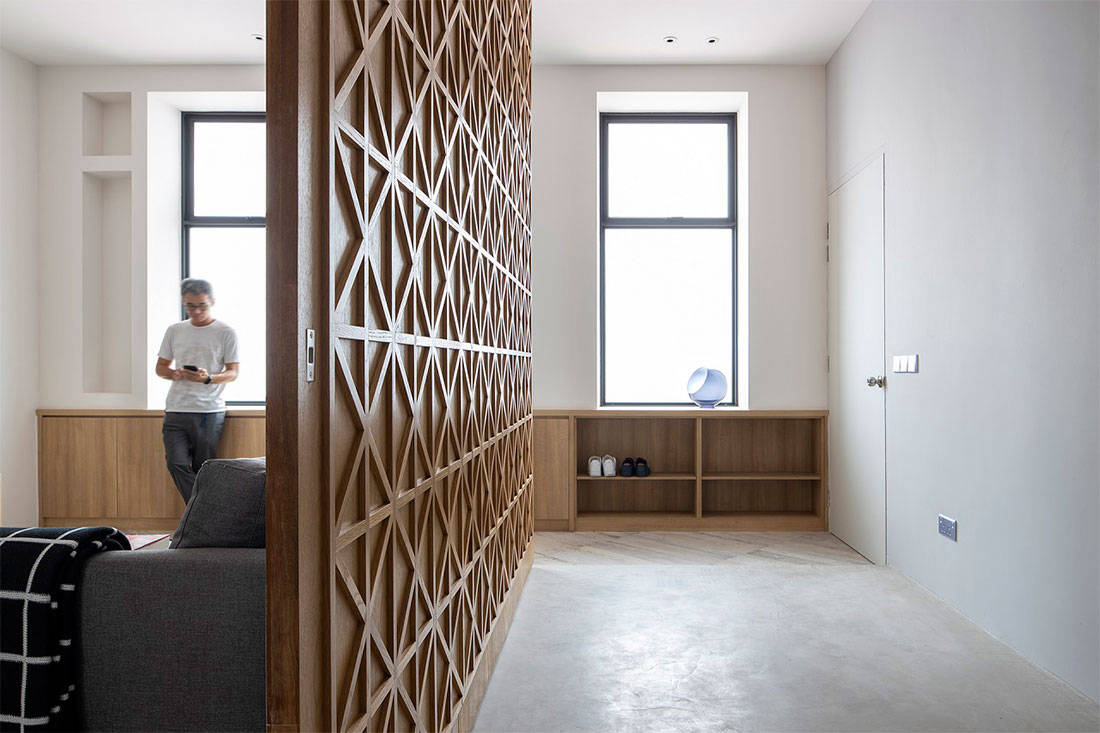 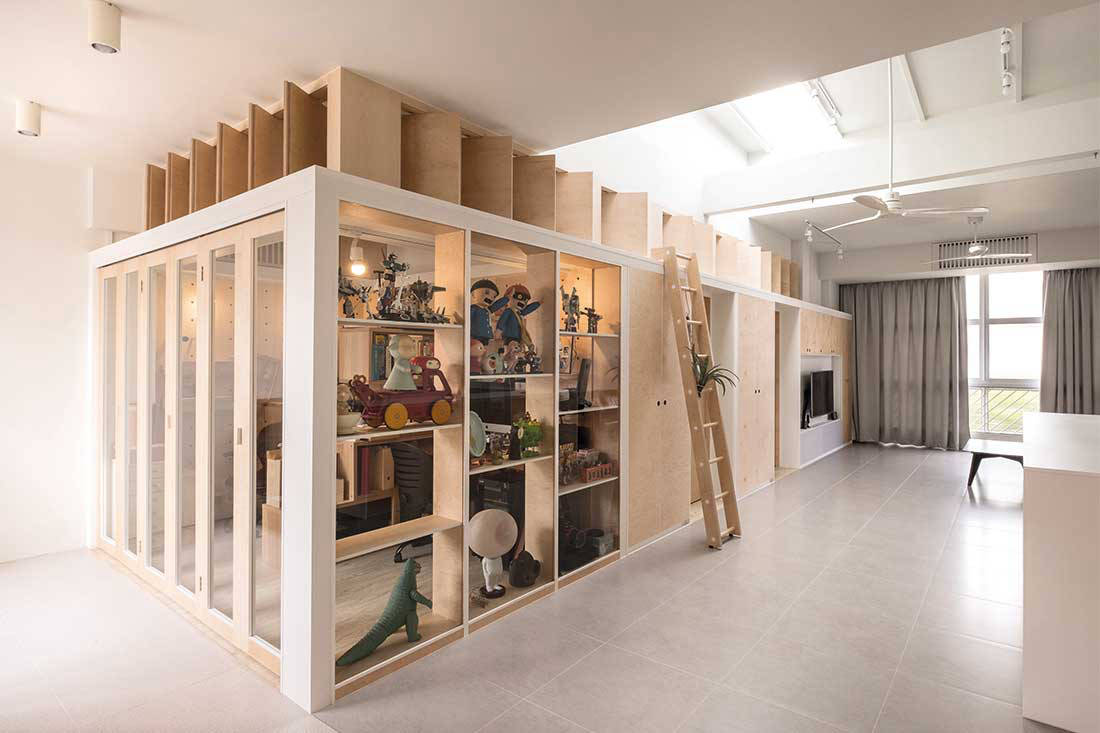 Birch ply is the endearing protagonist in this spacious walk-up unit. The owners wanted their home to be bright and airy while maintaining a level of privacy from its neighbours and the street. They also wanted the colours to be kept neutral.

Apart from that, a fair amount of creative latitude was afforded to Produce. This gave the designers an opportunity to experiment with carpentry work, mainly using birch ply from Panelogue.

The extensive application of this light-toned ply, and the introduction of daylight via ribbed glass windows (which also provides privacy) and a skylight over its main living area, makes this apartment is comfortably lit, and private. 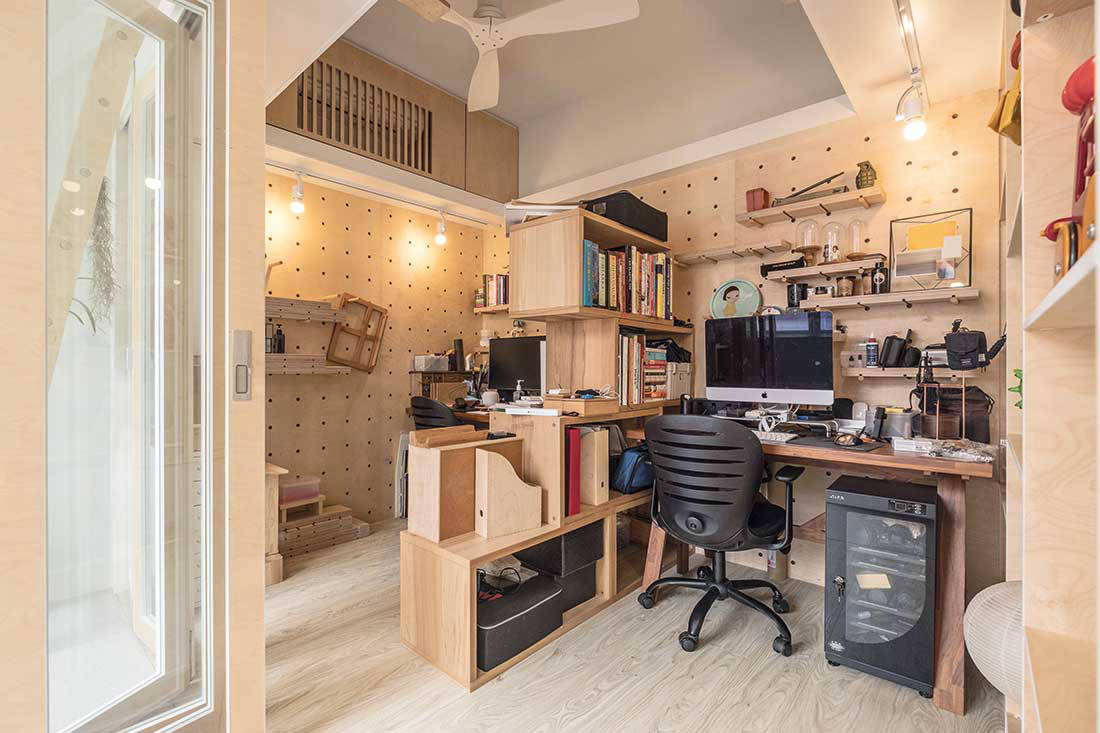 The enclosed study is the centrepiece. The other highlight of the design is the system of operable timber shutters that had been fabricated for the rooms to regulate light, air-conditioning and natural ventilation (drawn in by their ceiling fans). 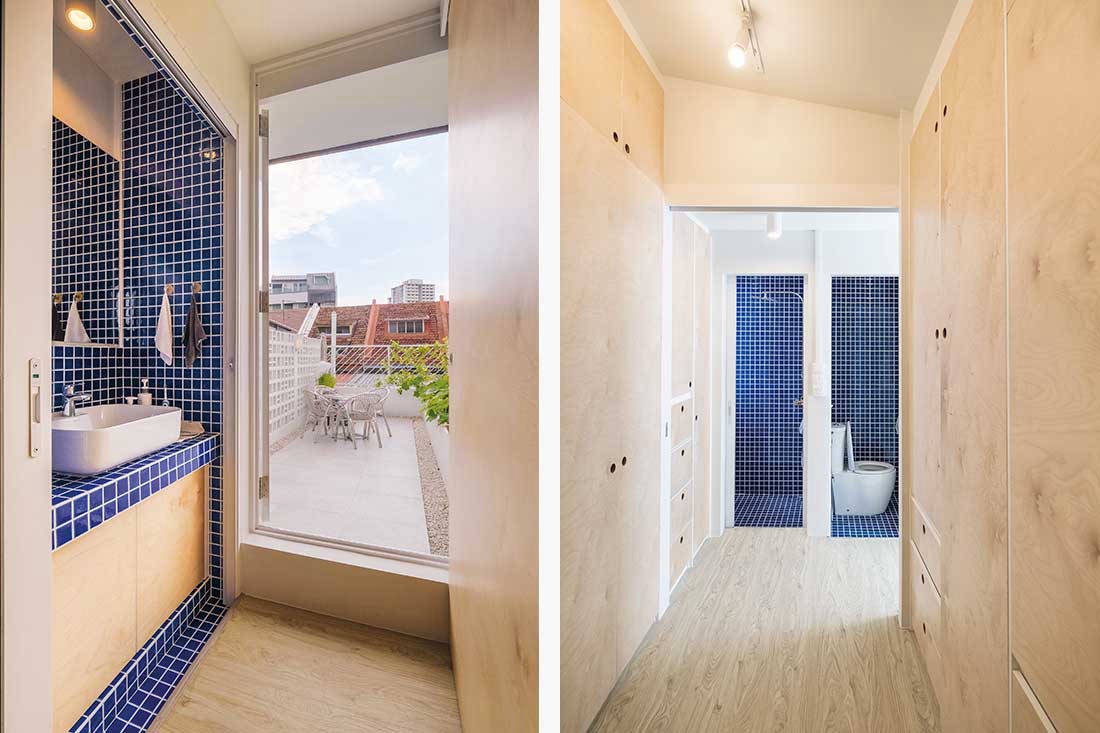 The designers recall: “There were significant discrepancies between what was on site and the as-built drawings – which, when pulled from the archives, we discovered were hand drawn. The construction process was thus less linear and more reiterative in nature than usual, requiring on-the-fly adaptations to site conditions that surfaced.”

#7 Opening up a dim apartment 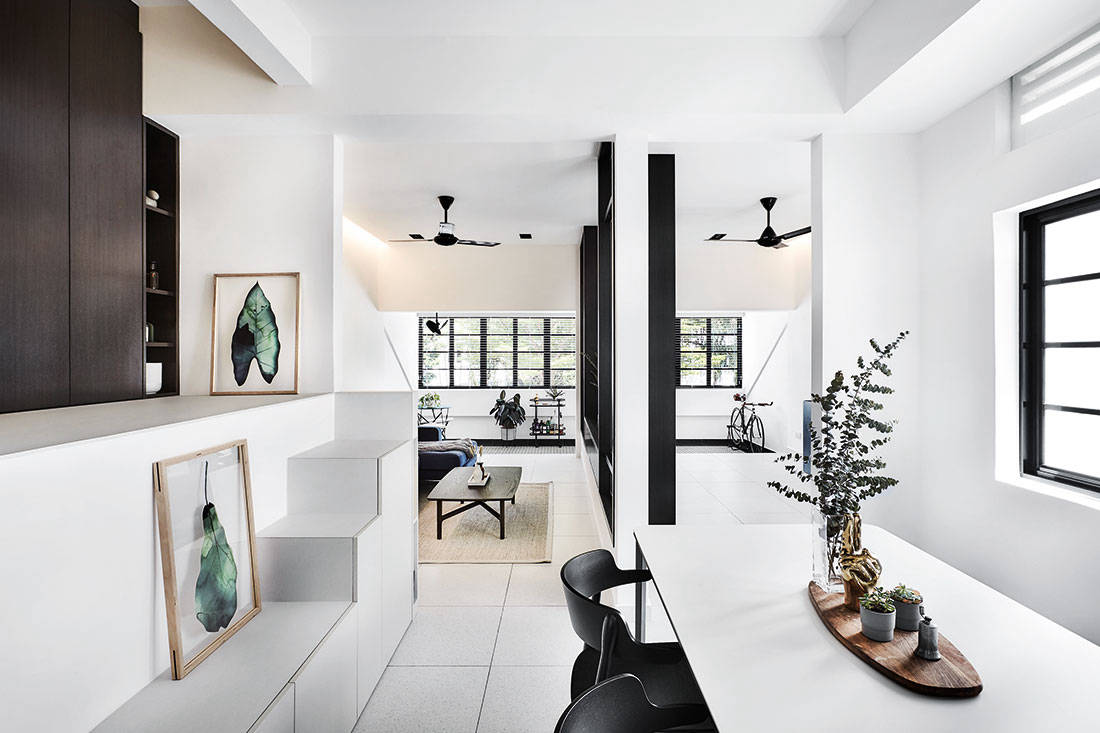 Like many walk-up apartments, this home was a major renovation exercise. As the owner recalls, “It was really dark inside and you couldn’t even read in the living area during the day without turning the lights on.”

HABIT was enlisted to transform the unit into a bright, open and airy home – one that still remained connected to its history and heritage.

“We managed to keep a portion of the original mosaic flooring in the balcony. We also whitewashed the old ventilation blocks, along with the walls and ceiling to make the space appear bigger, wider and higher,” says designer Li Yanling. 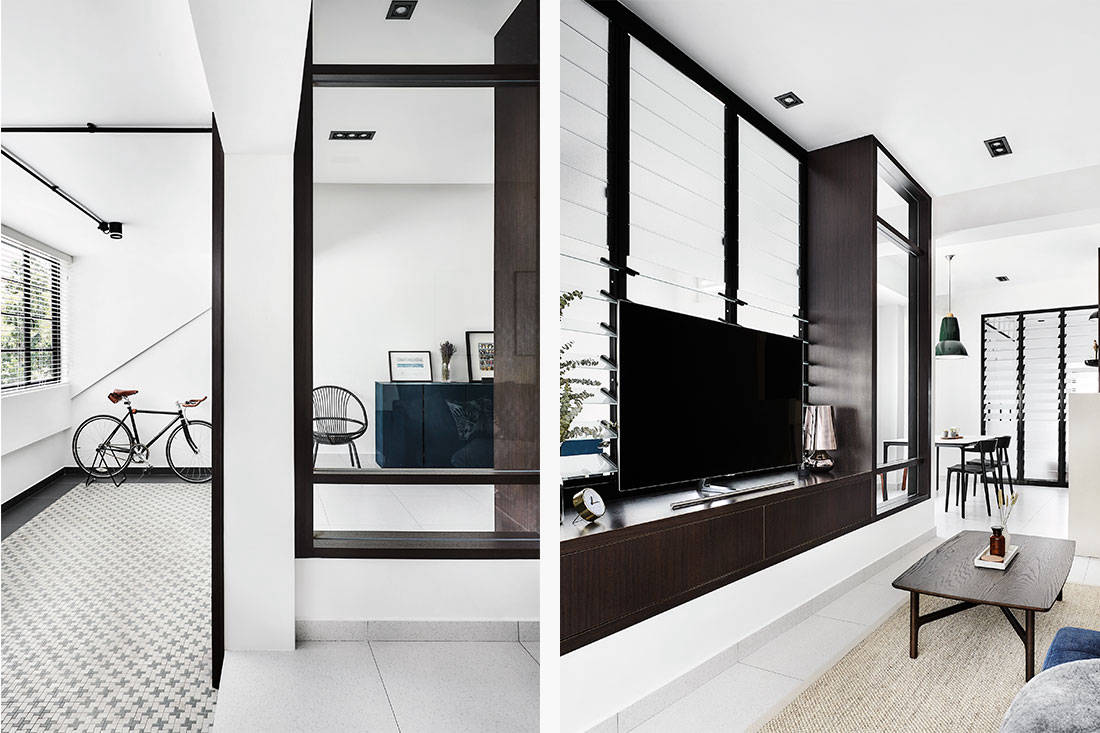 The designers took down the walls leading to two of the bedrooms, turning one of them into the living area, and the other into a yoga zone. With this new arrangement, the original, modestly-sized hall/living area now serves as a dining space, and all three zones and balcony are seamlessly connected. 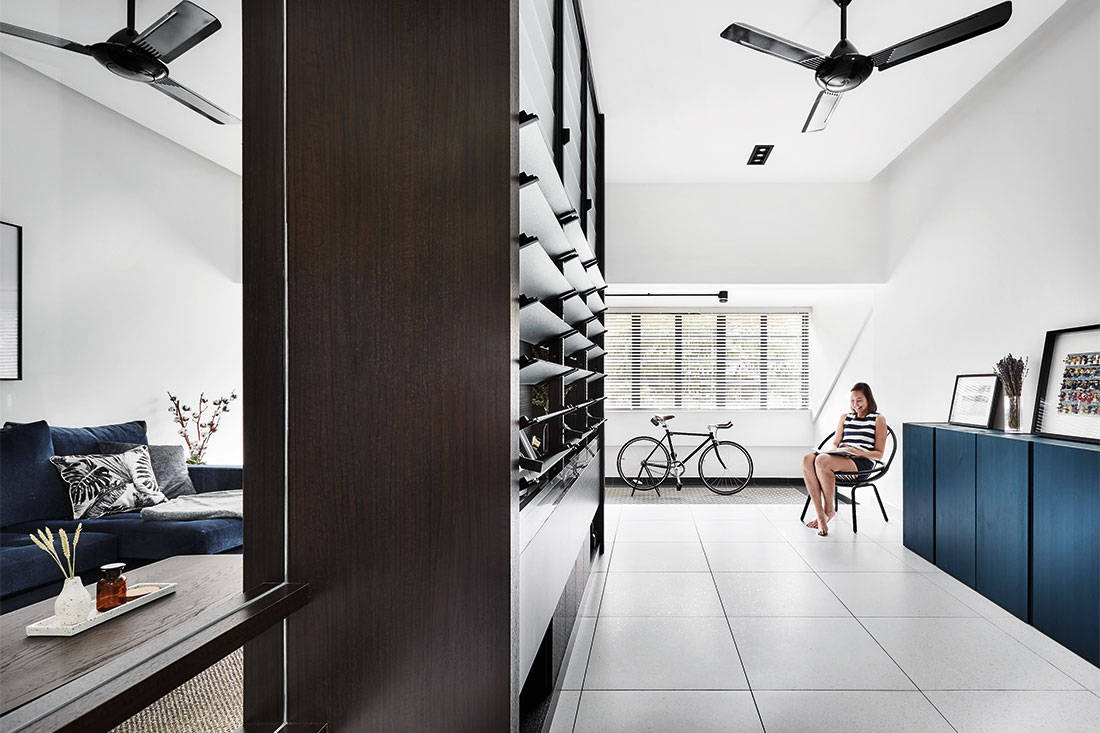 The original intention had been to build sliding doors between the living area and yoga space. However, a structural beam that was discovered during the renovation process meant a trip back to drawing board. “Tiong Bahru flats are not identical, and each one comes with its own set of challenges,” says Yanling. As an alternative, the designers built in its place a TV console flanked by glass panels, which still allow light and views through. Panels of textured glass louvres offer ventilation and further the see-through quality between the spaces, whilst ensuring privacy when needed.

We think you may also like Home renovation: What to spend and splurge on