State of Kin’s bold use of colour and unique style comes to life in Shutter House, a Perth home that embraces the joyfulness of design.

Alive with colour and energy, State of Kin’s Shutter House in Perth is an exemplar of the studio’s burgeoning talents and a message that bold colour can be both sophisticated and mature.

“Shutter House is designed at its core to be expressive; it provokes you to look closer and longer at things – it does not hide,” says State of Kin. 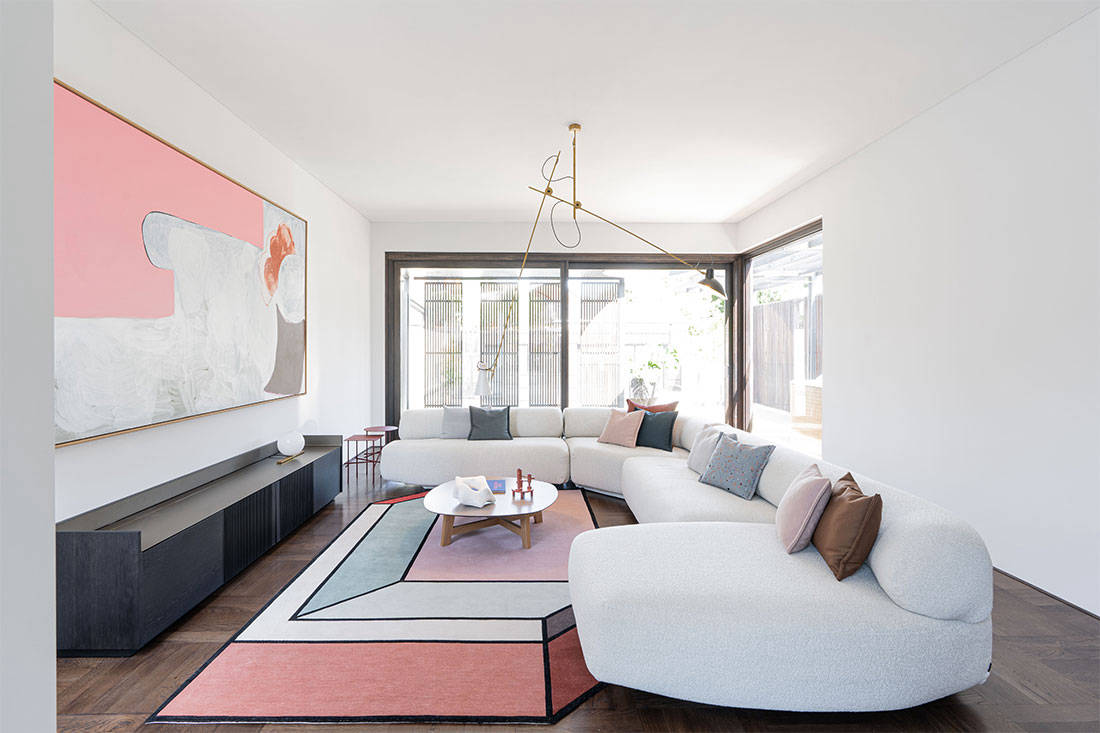 Externally, locally sourced timber makes up the battens that overlay the building’s concrete block structure. The shuttered facade can be closed to retain privacy while allowing light in, or opened entirely to provide unobstructed views of picturesque Lake Monger, or Keiermulu as it’s known by the local Noongar people.

Inside, art and meticulously selected furnishings have been curated to exactingly suit each space. 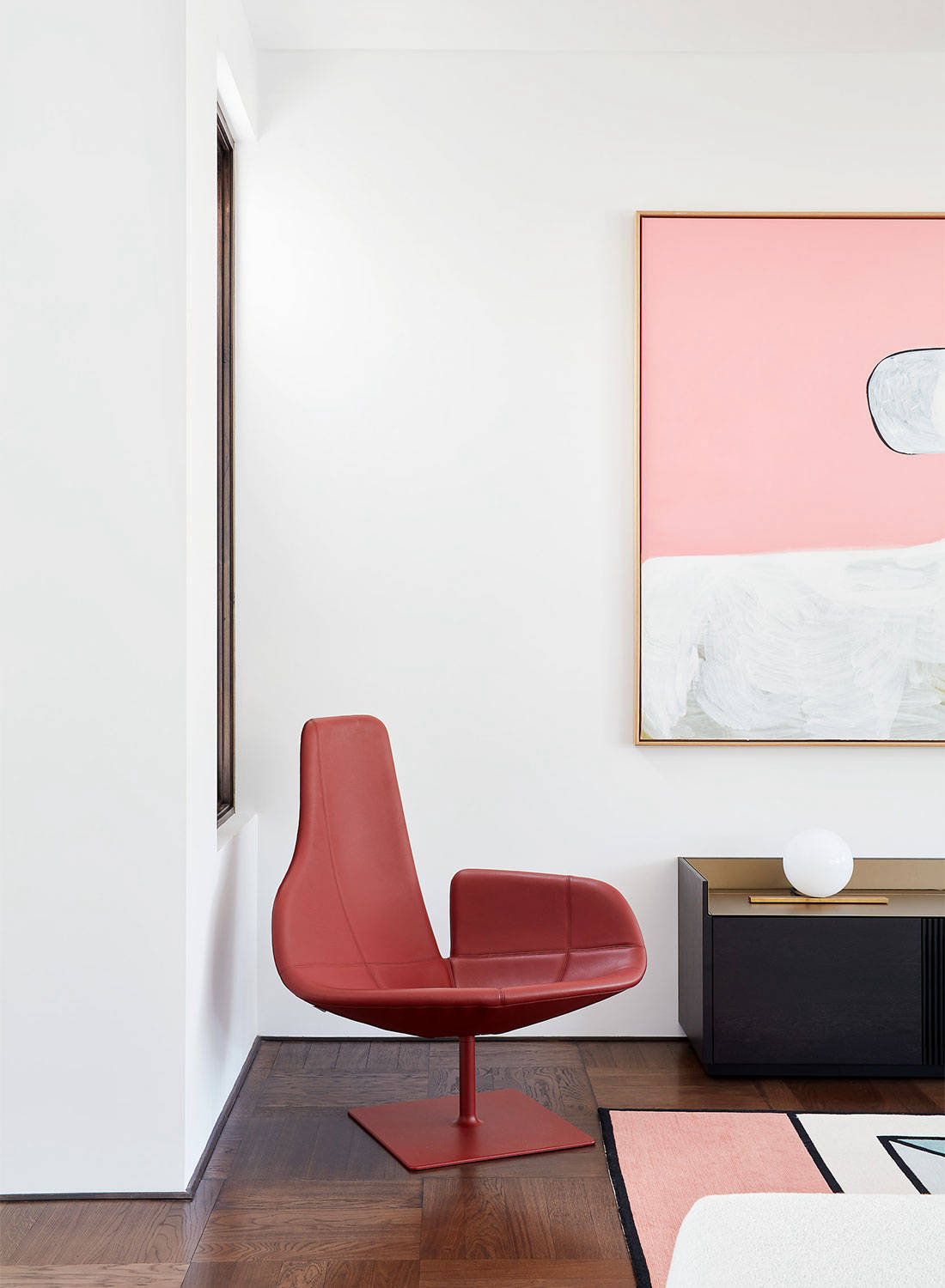 “The home is an exploration of tactility, a balance between powerful and gentle sensations and an experiential space throughout,” says State of Kin. “There is a balanced tension in this contrast that is simultaneously stunning and exciting but also feels calm.” 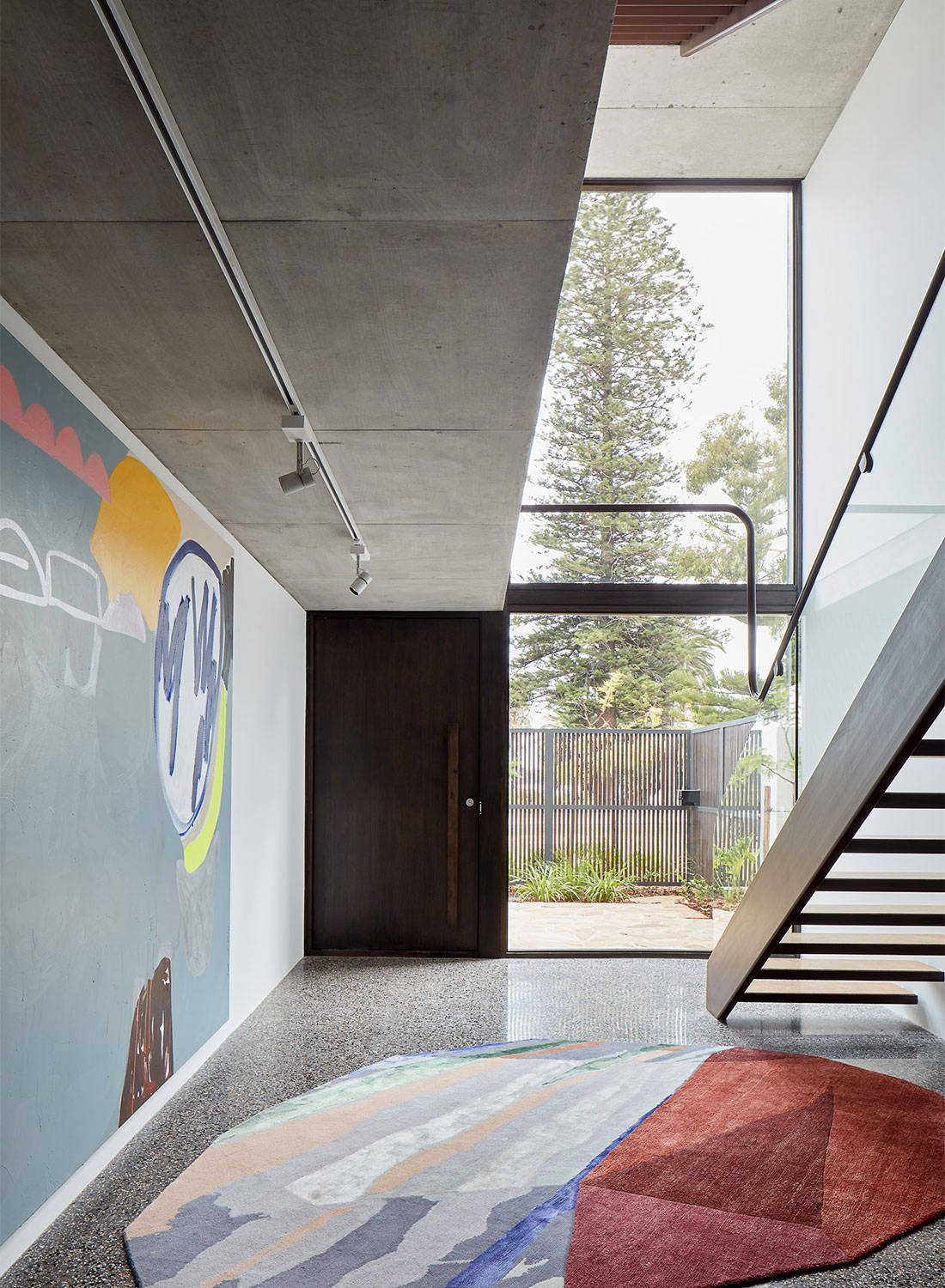 A large-scale linen artwork, Pool by Western Australian artist Elle Campbell lines the entrance. Opposite, a staircase extends to the first floor, and the double-height cement ceiling above creates a voluminous, striking space. Nearby, an abstract Fordite rug by Patricia Urquiola for cc-tapis rests on the white-speckled, black terrazzo floor. Urquiola’s cc-tapis rugs feature throughout the house, including Rotazioni in the master bedroom and Visioni in the living room. 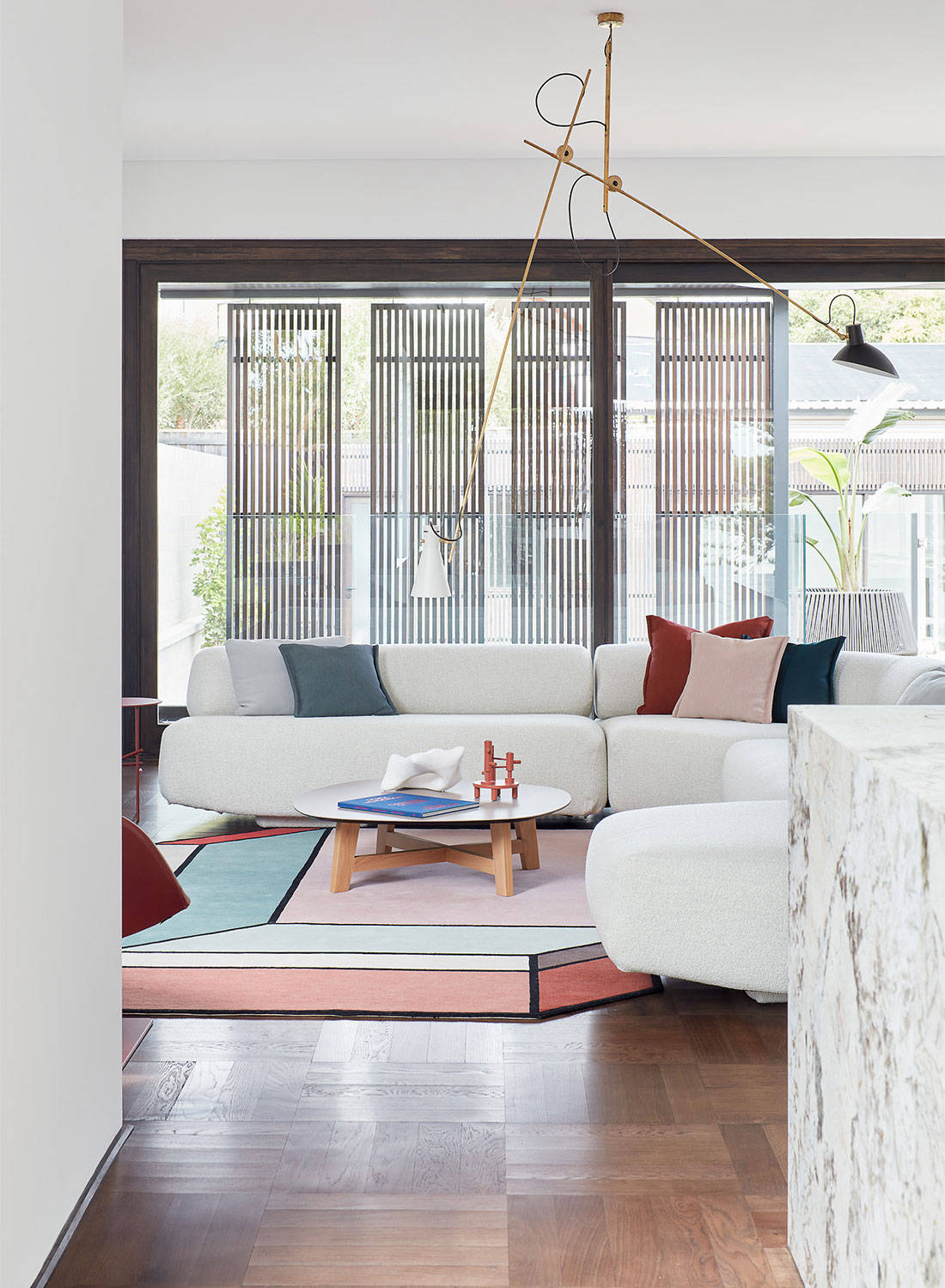 “Strong, rectilinear forms and graphic geometric lines are softened and offset by strategically placed circles and curves,” says State of Kin. This contrast is directly evident in the strong lines of the geometric living room rug, paired with the curved, plush and minimal Gogan Sofa and the pastel tones of the featured art. 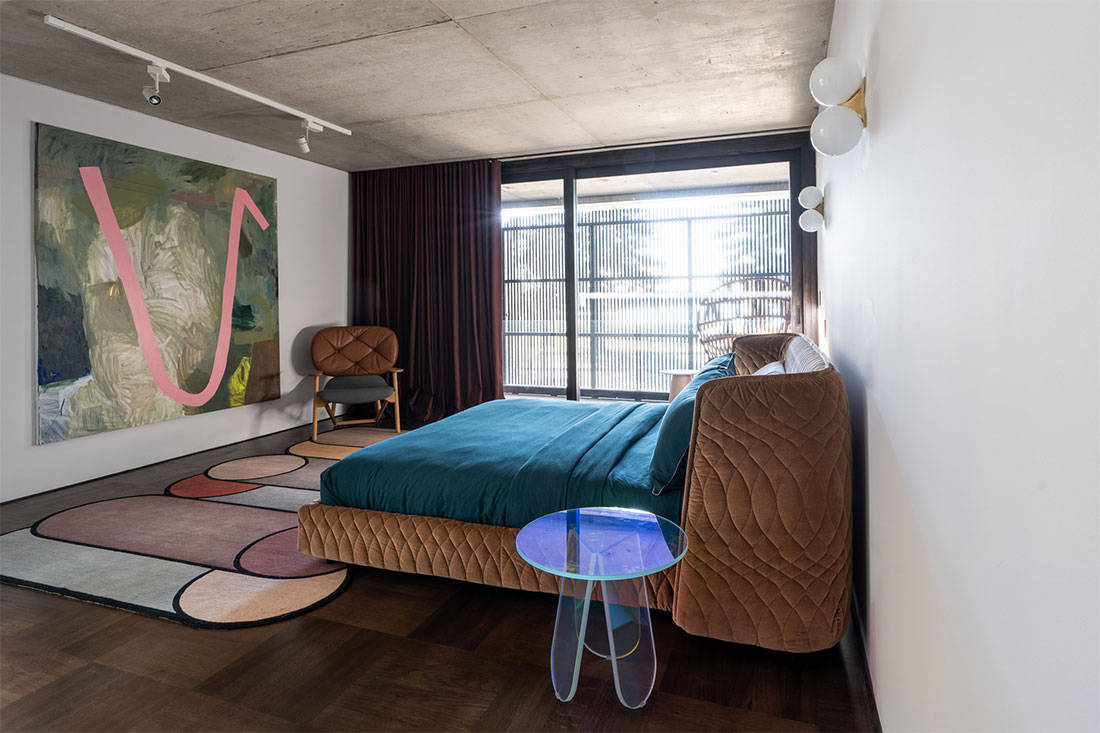 In the master bedroom, another work by Campbell hangs in front of the bed. An iridescent and multi-chromatic crystal table designed for Glas Italia stands by. The cement ceiling is embraced once more in the bedroom, bringing a slightly industrial energy to the room to contrast with the soft furnishings. 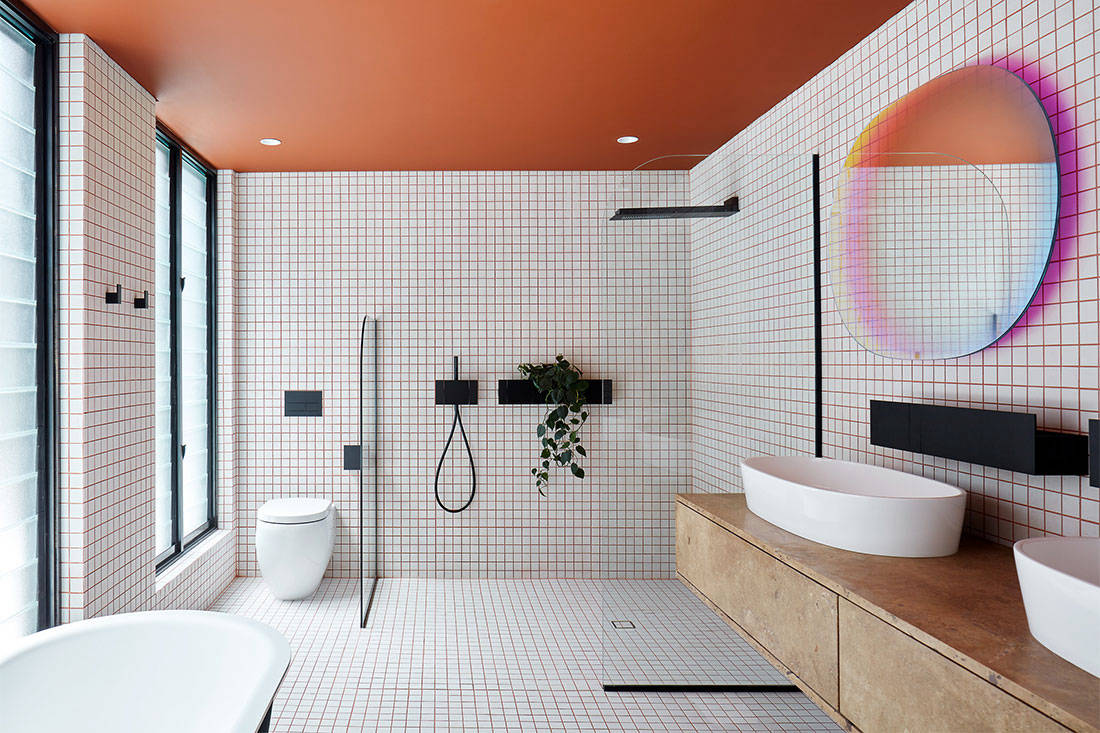 The bathroom of Shutter House is uniquely vivid, with a ceiling of deep burnt orange, a colour that is replicated in the grout between the white tiles. Another of Urquiola’s iridescent pieces, the Shimmer Mirror, hangs above the sink reflecting light and geometric patterns from the tiles around the room.

The use of colour is purposefully bold and has become a trademark of State of Kin directors Ara Salomone and Alessandra French since they began their studio. 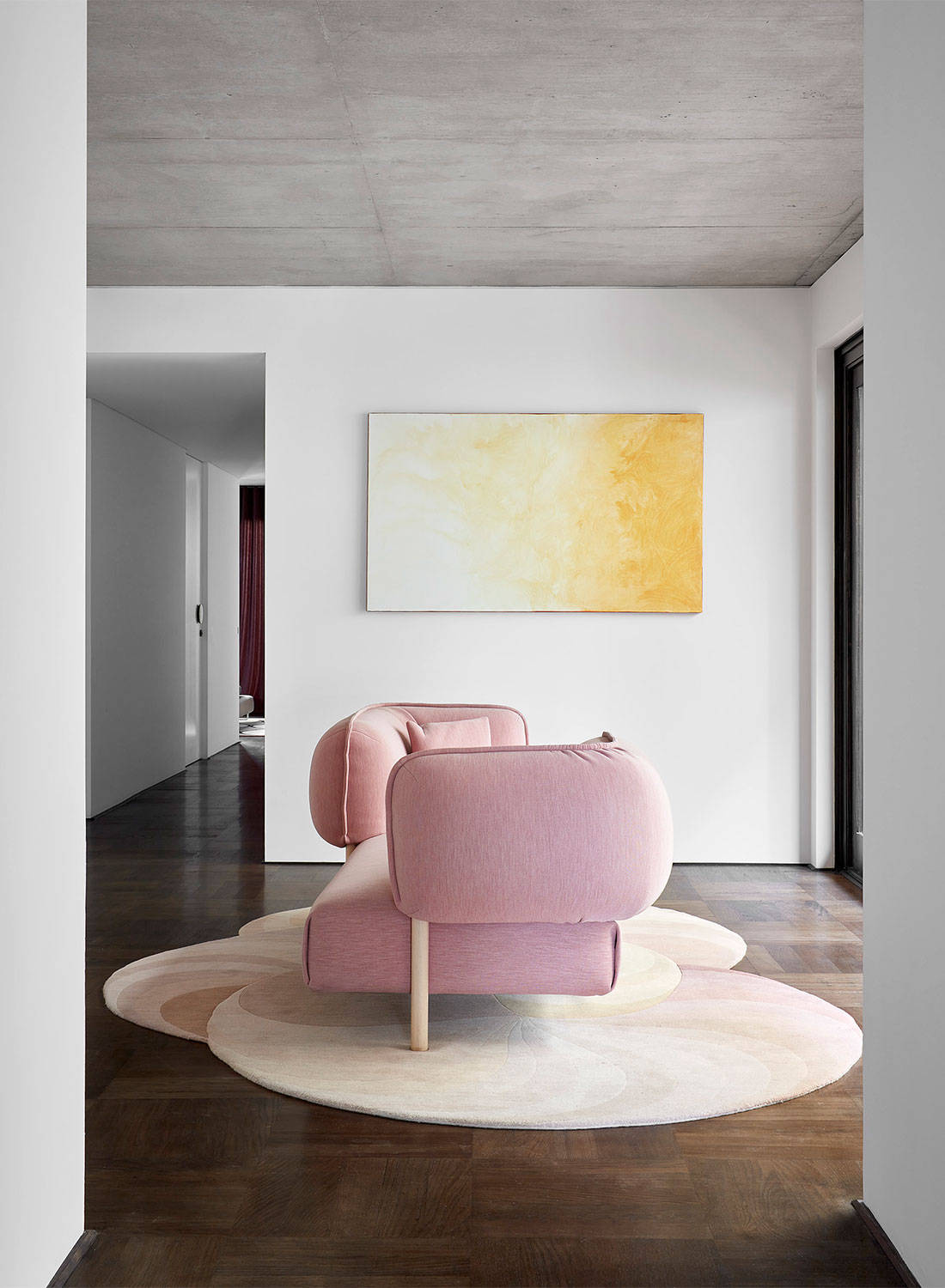 “We were still an emerging practice when we started the design for this project, and we had found in the past that clients would hesitate to explore the possibility of bold colour when it came to their homes,” says State of Kin. “We wanted to demonstrate that colour could in fact be sophisticated and mature, and that when juxtaposed against natural materials and a nuanced external palette could be highly successful.” 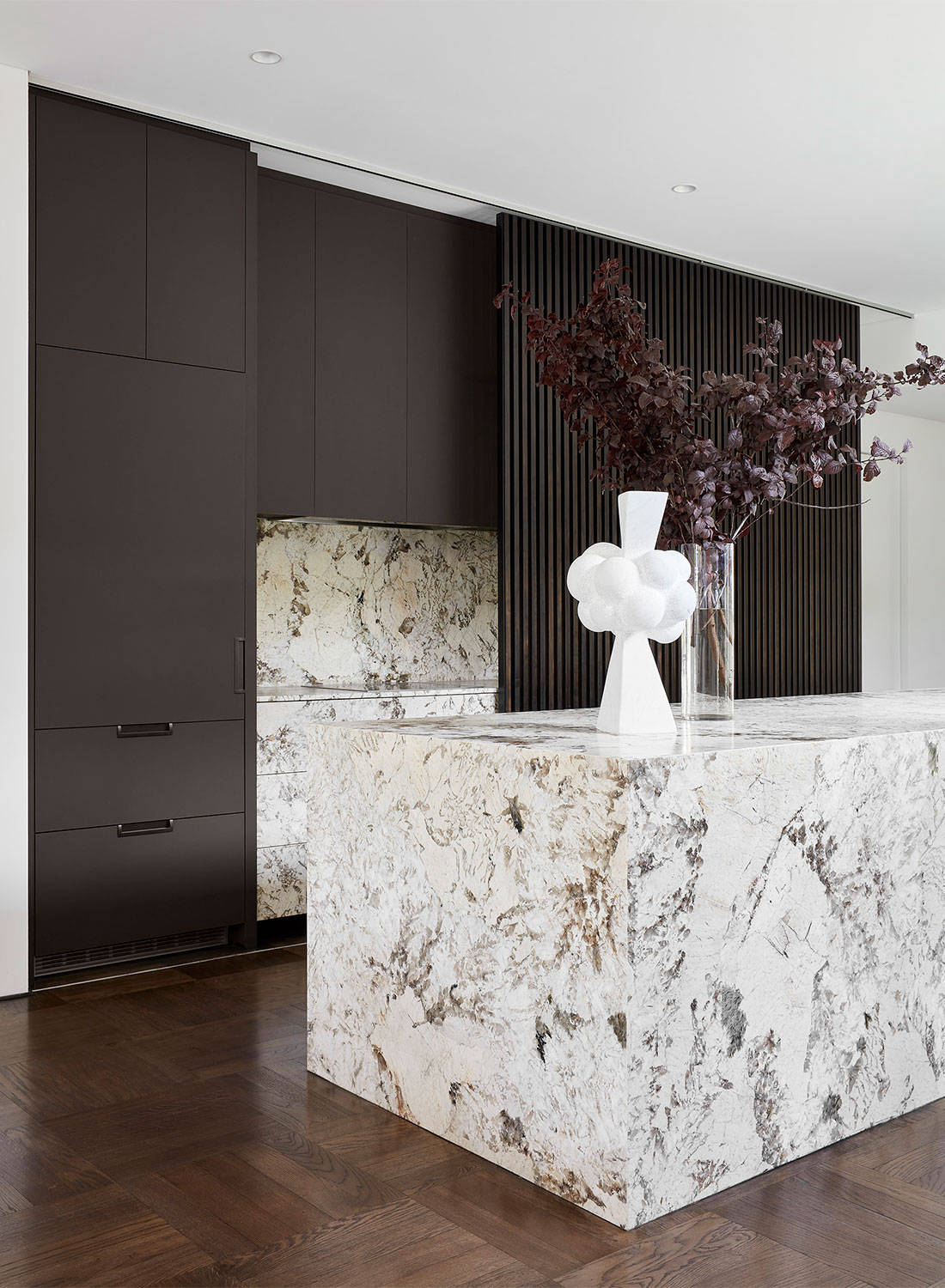 “With Shutter House and Brick House being completed at the same time, they set a sort of a benchmark for us as a business to showcase our work and really push the boundaries,” says French. “It was a very fortunate and very exciting way to set the tone for what we want to showcase moving forward and from that, I think we’ve started to get some amazing clients that are really like-minded.”