Innovative design never tires. And proving that point are a series of re-editions of some of Louis Poulsen’s classic lights – still turning heads, and more so with new metallic finishes.

“The year 1958 was an incredible one for architecture and design around the world – and certainly in Denmark,” says Rasmus Markholt, Product & Design Director at Louis Poulsen. “There was something in the water: Arne Jacobsen, for instance, created an array of design icons, which we produce to this day, for his SAS Royal Hotel masterpiece in Copenhagen. And Poul Henningsen lit up the world with completely unprecedented pendant concepts.” 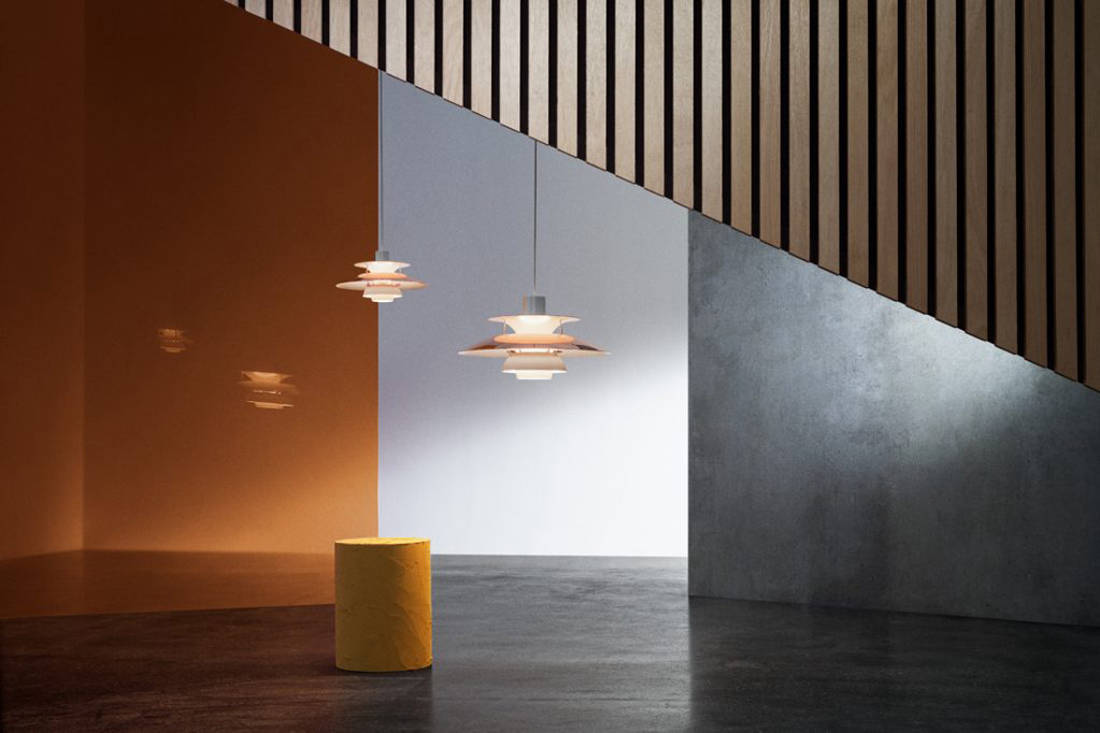 The Enduring Portfolio of Louis Poulsen

Those unprecedented designs have retained core positions in the Louis Poulsen catalogue for 60 years, cementing their important place in the history of design with every passing year. The PH 5, PH Artichoke and PH Snowball have transformed spaces all over the world for decades with their innovative sculptural forms that truly shape light for human comfort and enjoyment. Now, marking their 60-year anniversary, two of those designs have now been released in enticing new metallic finishes that resonate with visual warmth and a gentle ambience. 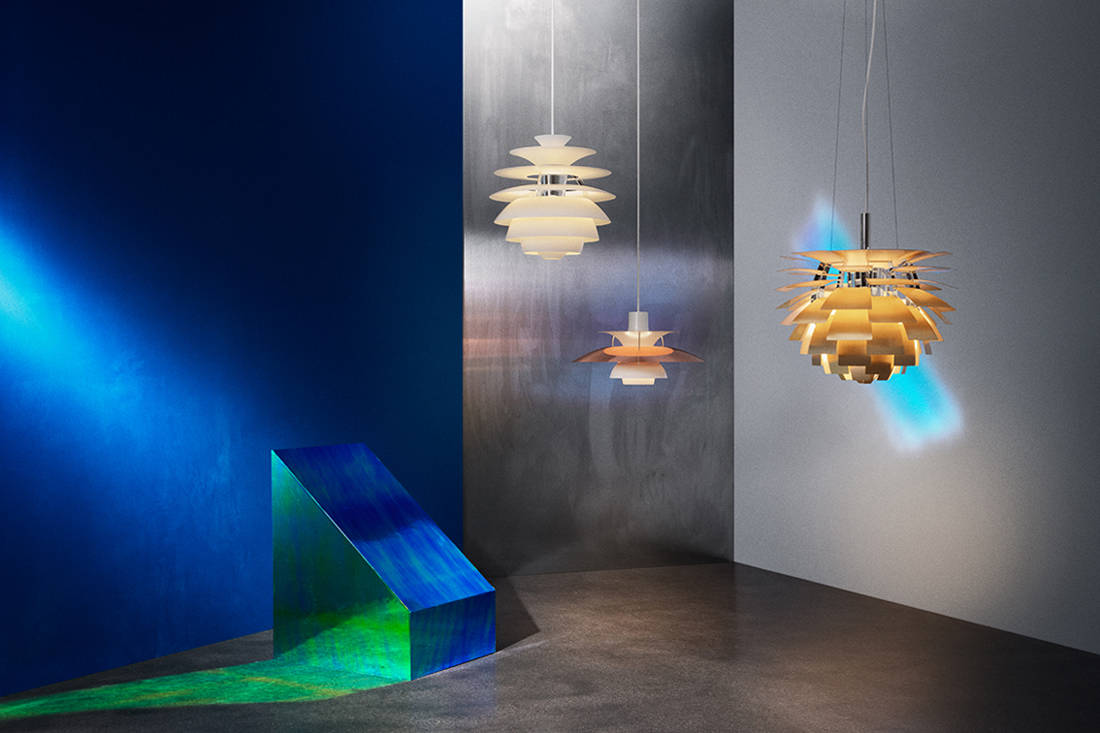 The familiar PH 5 is the best-selling design in Louis Poulsen’s entire portfolio. But now it presents itself in a new light. Copper shades are paired with white tiers for the commemorative editions of PH 5 and PH 5 Mini, creating a visual effect that highlights Henningsen’s shade system and offers a dynamic new reading of the pendant with the surroundings being reflected. The copper brings an added glow, while the pendant (now with an LED fitting) delivers its gentle glare-free illumination just as it always has. 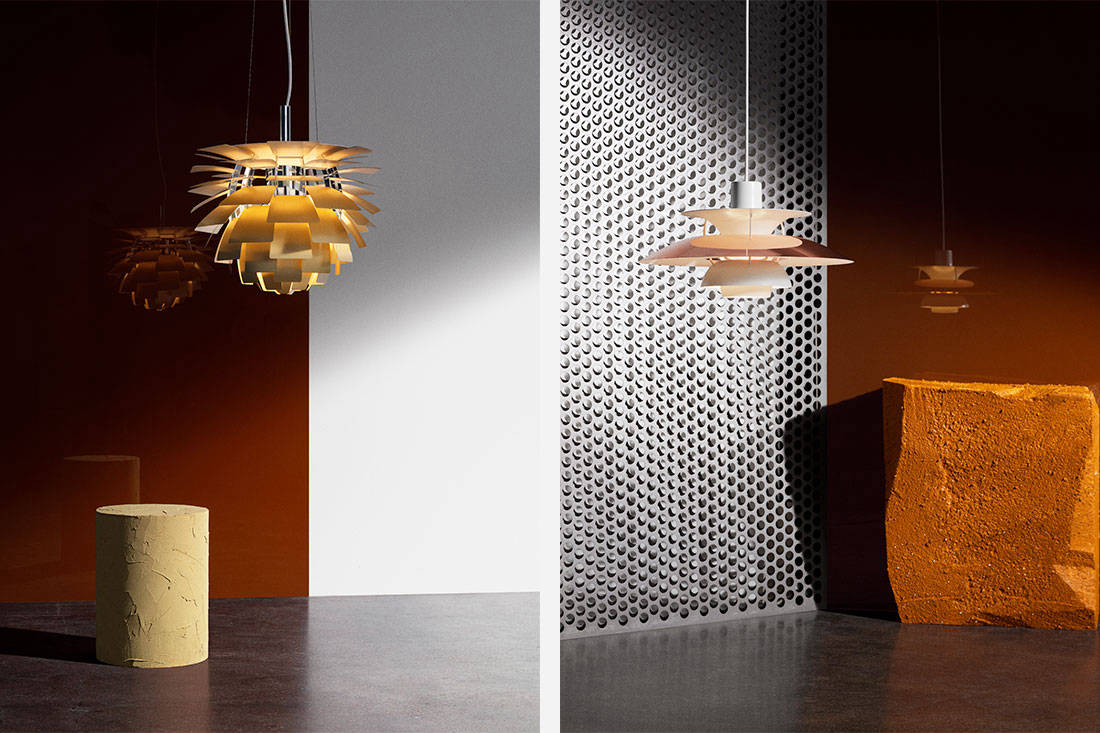 Brushed brass was the material of choice for the anniversary re-issue of the PH Artichoke. Since its inception, the popular PH Artichoke has been produced in metallic editions, but brushed brass was previously only available through custom orders. Markholt describes the anniversary edition as organic, nature-inspired and earth-toned. “There is a warmth and tactility to the finish that we think will make it a very welcome addition to private spaces, where the PH Artichoke can show its softer side,” he says. 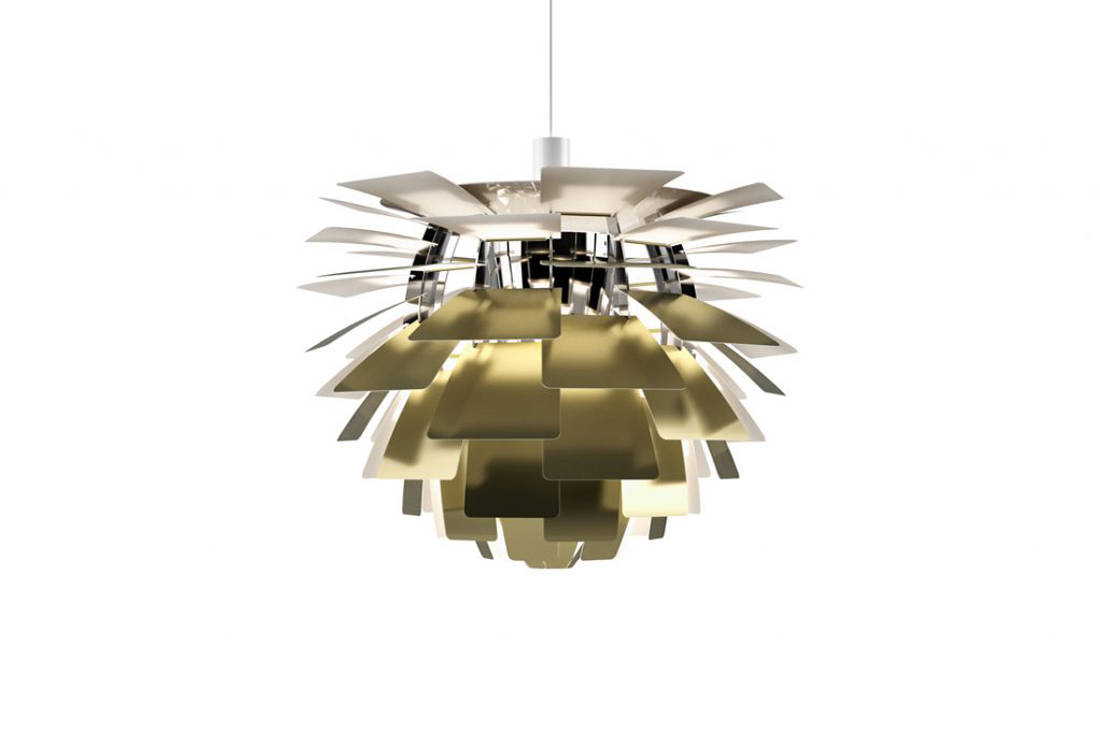 He predicts that the anniversary pendant will find a warm welcome in a wider array of interior spaces – from entryways to living and dining rooms, and master bedrooms to private workspaces. The brushed-brass edition of PH Artichoke will be available until the end of 2018 in all sizes, engraved with Henningsen’s signature and a unique number.

Also designed in 1958, but only produced from 1983 onwards, is the PH Snowball. Sixty years ago, it was exhibited alongside the PH 5 at the Danish Museum of Decorative Art. This year, Louis Poulsen honours it as an icon alongside its cousins, but in keeping with its name, its classic white finish has been preserved. PH Snowball diffuses glare-free light between shades that are matte on the underside and glossy on the top surface, bringing a subtle depth to the encounter of light – a blend of crisp reflections and a warm glow.

Perhaps a true sign of design innovation is when strong links can be drawn between classic designs and those that are developed many years later. Such is the case with Enigma – a light designed by Shoichi Uchiyama for Louis Poulsen in 2003, but harking back in terms of form and the Louis Poulsen DNA of shaping light to Henningsen’s classic PH Snowball and PH 5. 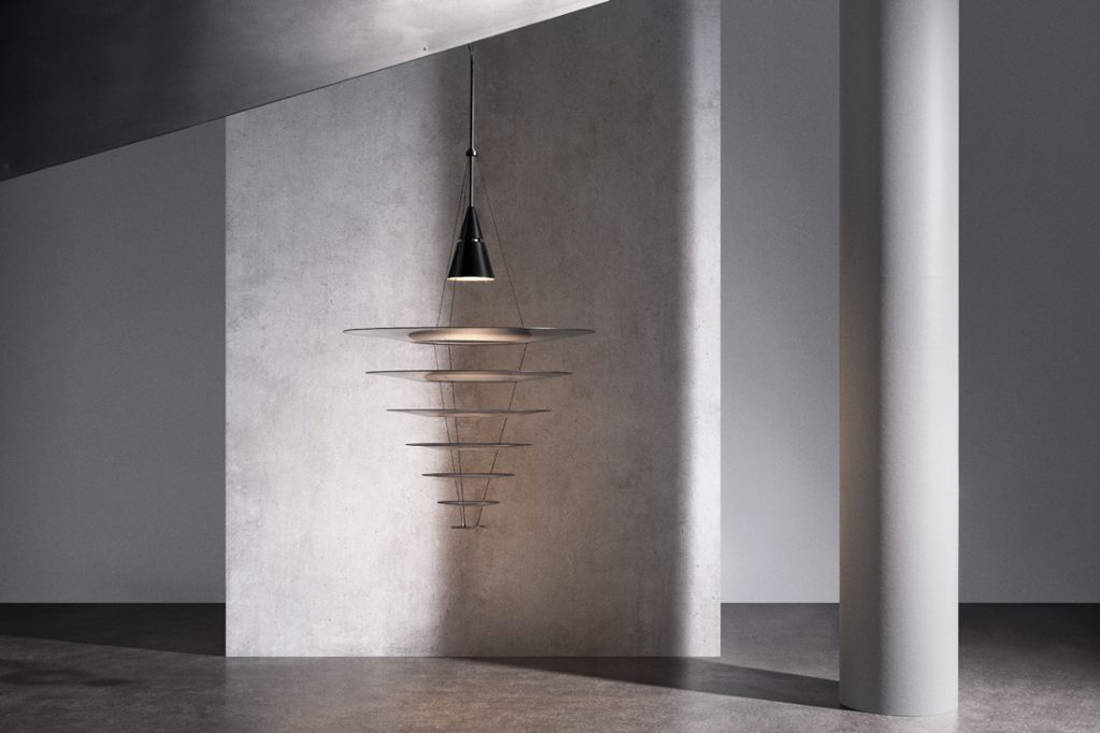 Enigma, originally in matte-finished acrylic but released this year in a new black version, nods to Henningsen with its slim, multi-layered shades in concentric circles; but in its shaping of light it is thoroughly unique. Uchiyama achieved an ideal distribution of light in what is essentially a transparent form. 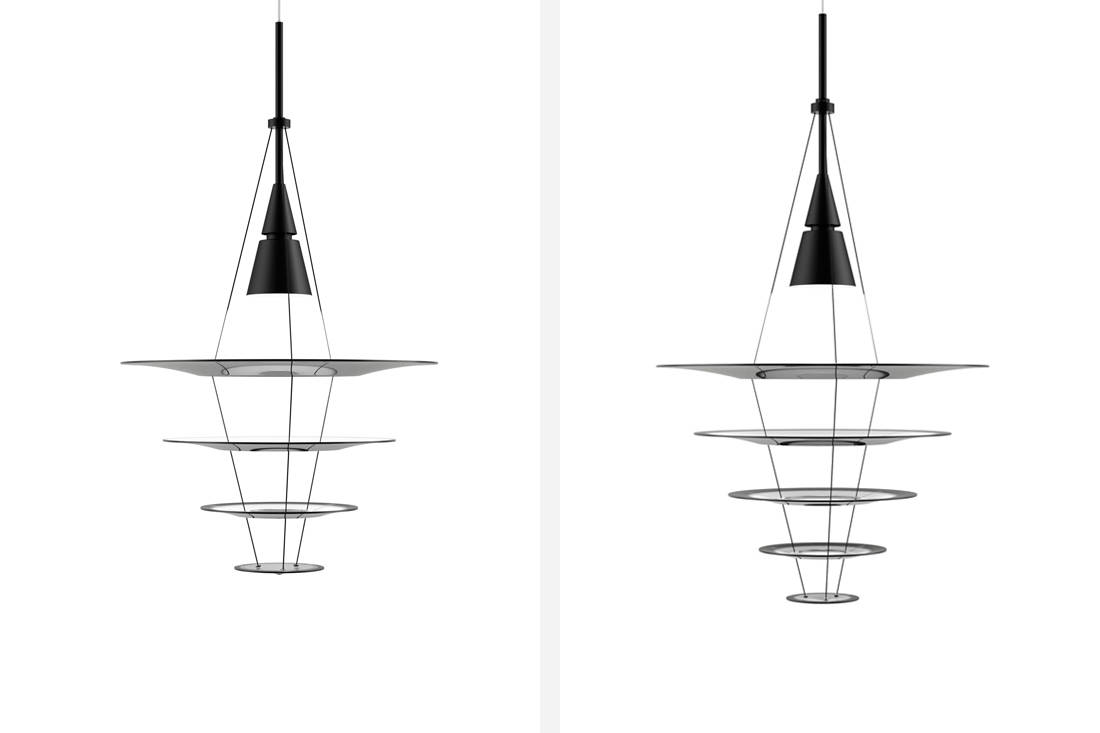 He explains: “Poul Henningsen sought to create the best, the most comfortable and the most functional lighting. I had exactly the same foundation for lighting, and developed my own interpretation about light in empathy with him. This meant creating a new use of a light source and a unique way to control the light. The fixture has new features and functional shades. The rays from the light source accurately hit each of the shades, and no glaring light is seen from any angle.”

He adds, “The new black version will fit well in subdued or white interior spaces, with a unique appeal different from the original, frosted version.” 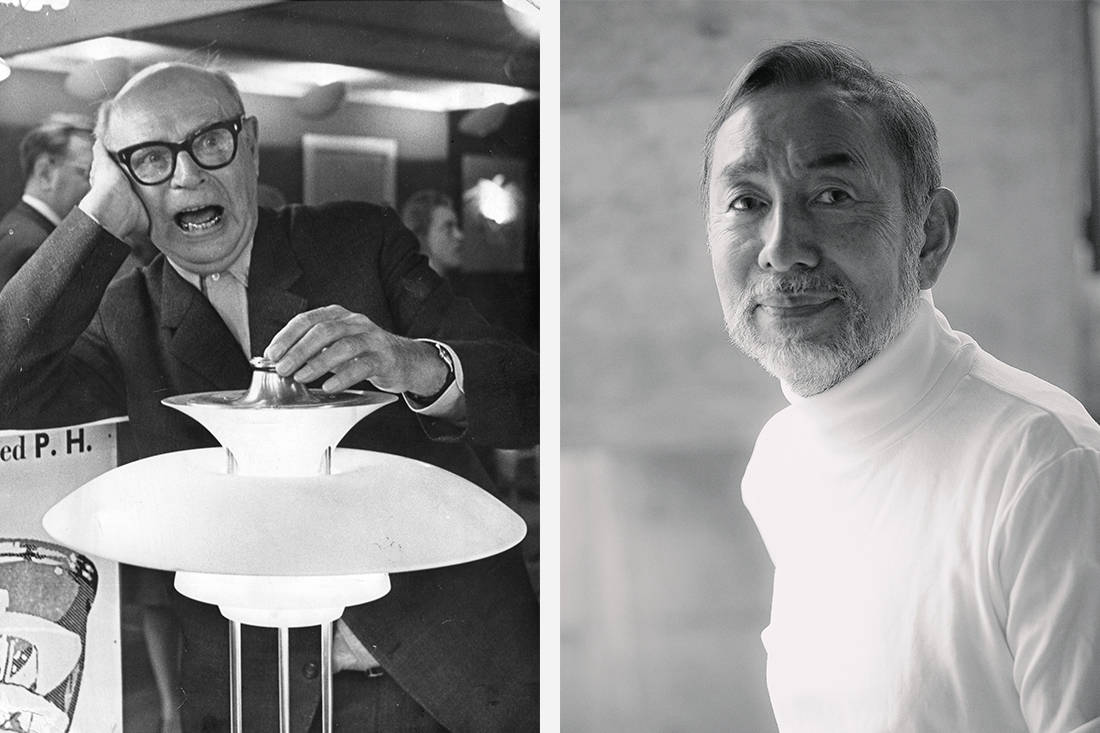 We think you may also like Quality of light: How Louis Poulsen stand the test of time