Understated luxury in a Zen-like apartment

Tailored as a private enclave in the heart of the city, this apartment seeks to achieve a sense of understated opulence through a luxurious mix of textures and materials.

Beauty is subjective. Yet this home undoubtedly appeals to many. Perhaps it’s because of its restrained colour palette, its minimal furnishings or its purposeful negative space. Regardless, it conjures a sense of calm and understated opulence that make it impossible to pin down a deciding factor. 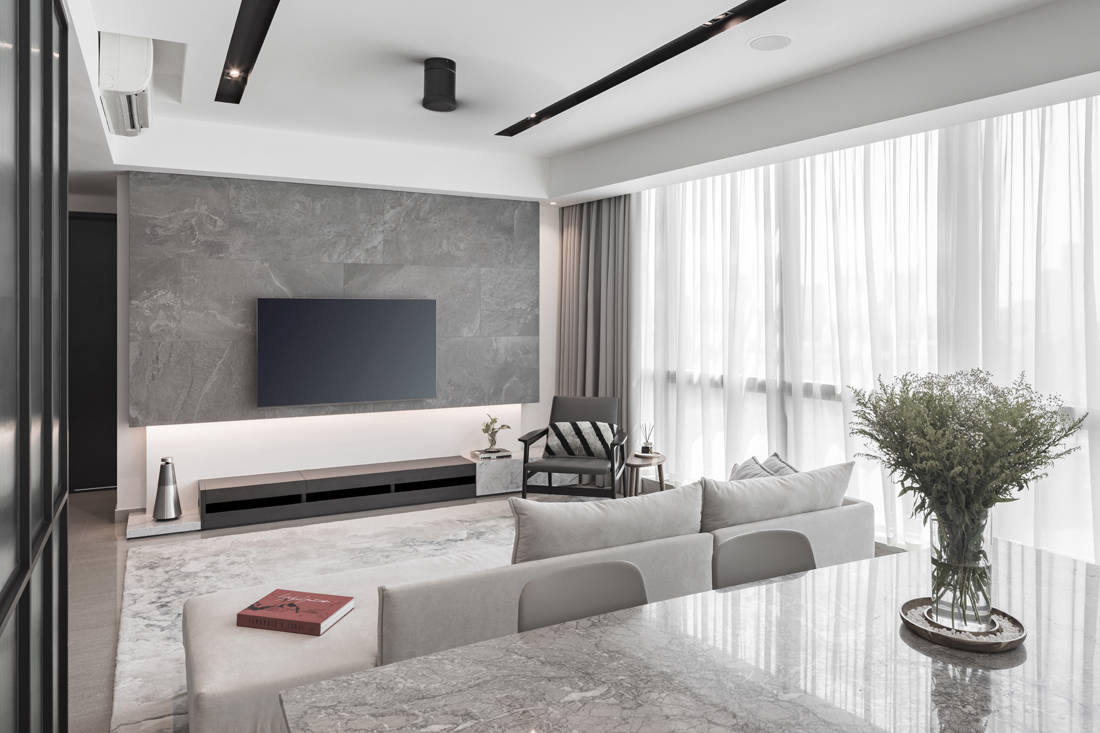 Engaged by a young executive couple who have the penchant for travelling and appreciation for nature, Alex Liu and Jay Liu of Right Angle Studio explain that the apartment has been tailored as a private enclave in the heart of the city, much like a home away from home.

But the brief to Right Angle Studio was admittedly multi-fold. They wanted a cosy dwelling that was both simple and classy, and that would comfortably accommodate their two childrens’ needs; a residence that could play host to friends and family, yet maintain privacy in the private quarters. 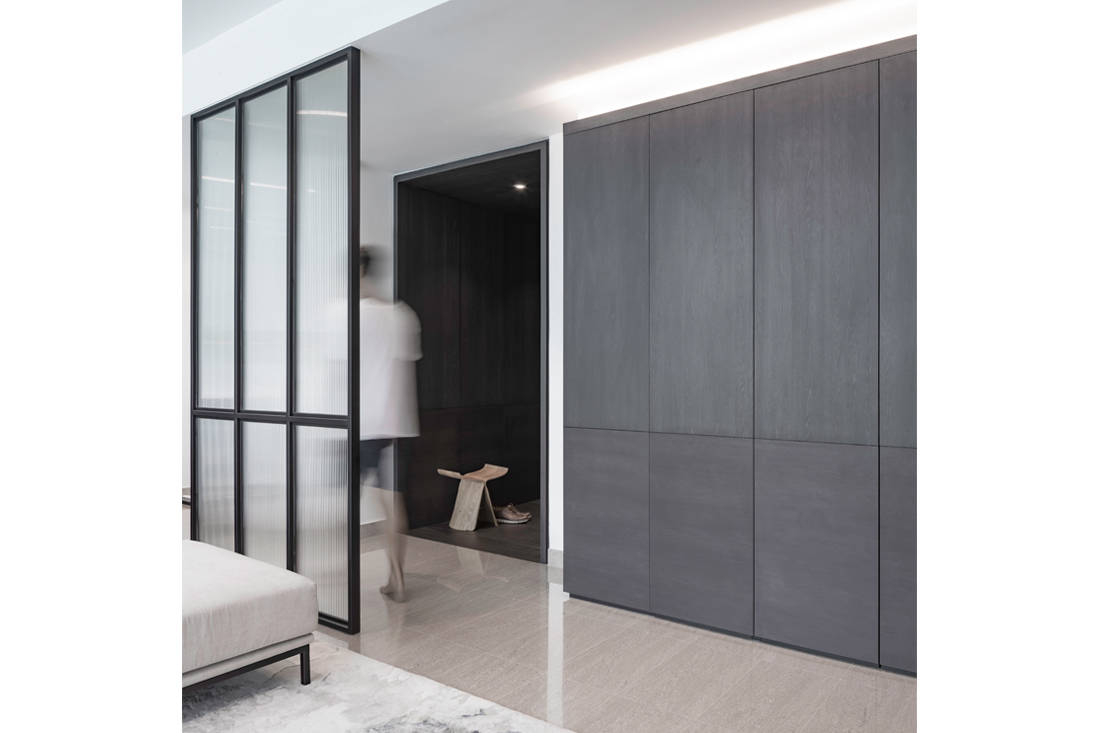 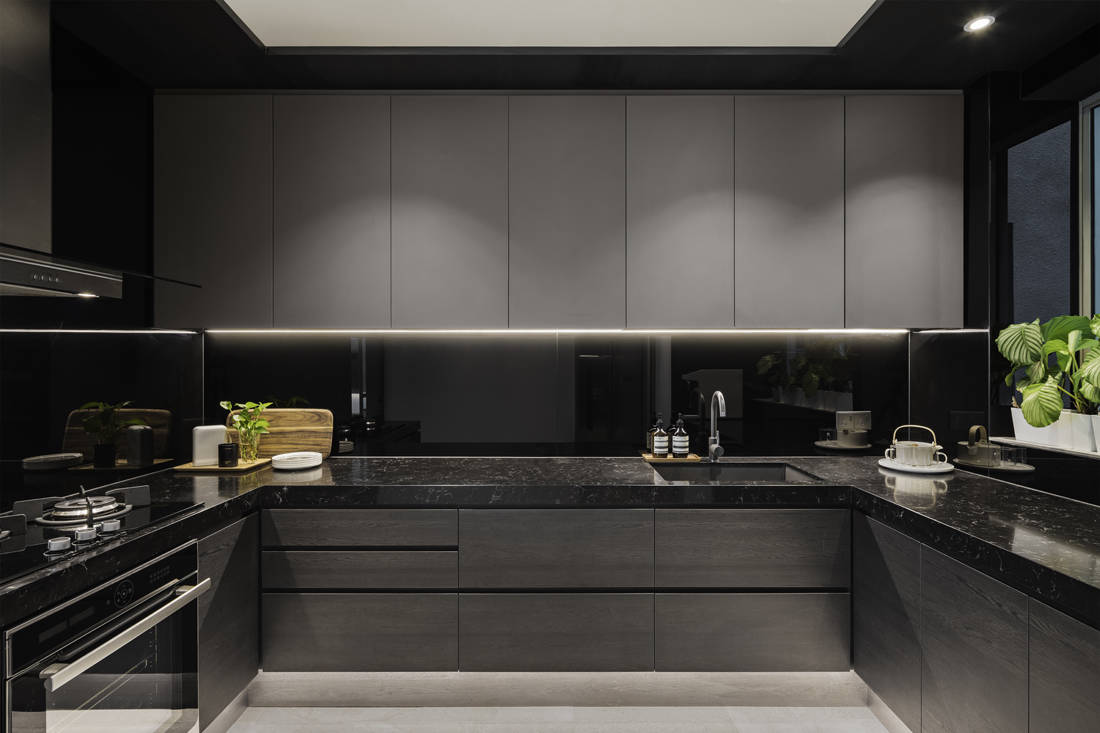 At the private lift lobby itself, Alex created a U-shaped portal frame, encasing the space comfortably in a framed tunnel-like space. This further echoes in the kitchen, bedroom and bathroom for a consistent design language throughout. 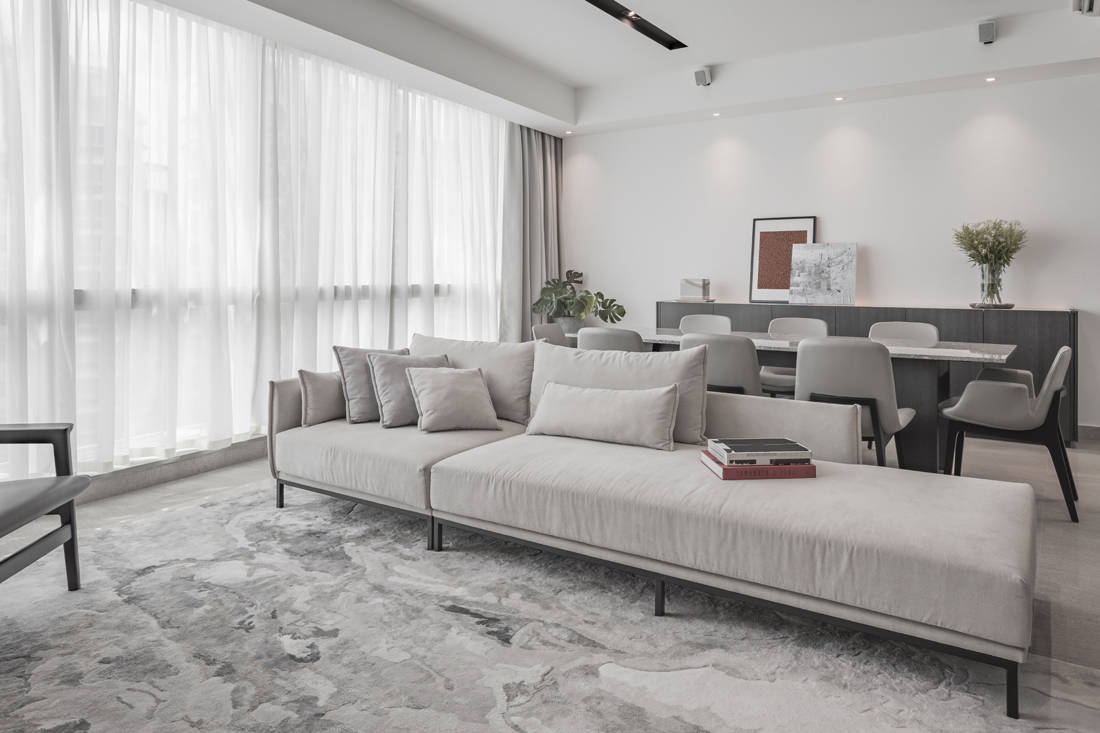 A glass screen feature that doubles as a privacy cover sits at the entrance, enabling a delicate peek into the interiors and beckons one to venture further. Once inside, the living and dining areas are filled with natural light harvested from the full-height windows. “The transition from a dark and enclosed space to a brighter, open-plan living space creates the impression of a growing interior,” share the designers. 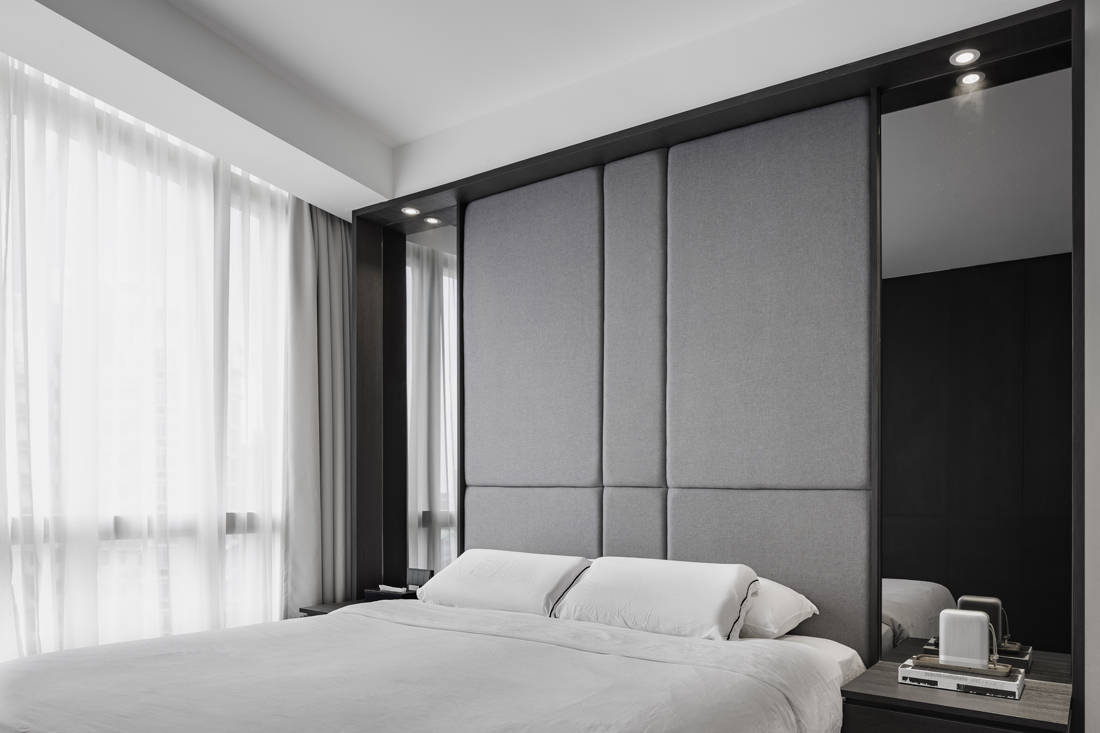 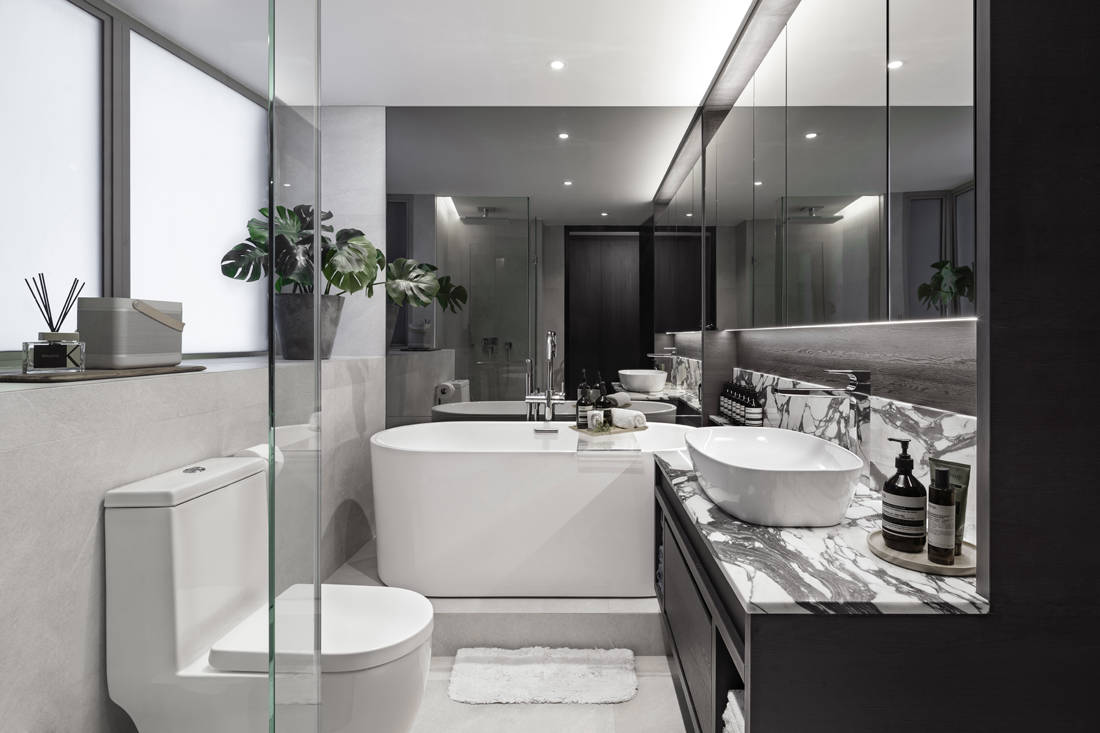 This rectilinear, cinematic configuration is also evident in the private quarters. Access to the washrooms and bedrooms are intricately concealed, keeping the layout discreet. But when the doors are opened, they reveal a much larger expanse of space. 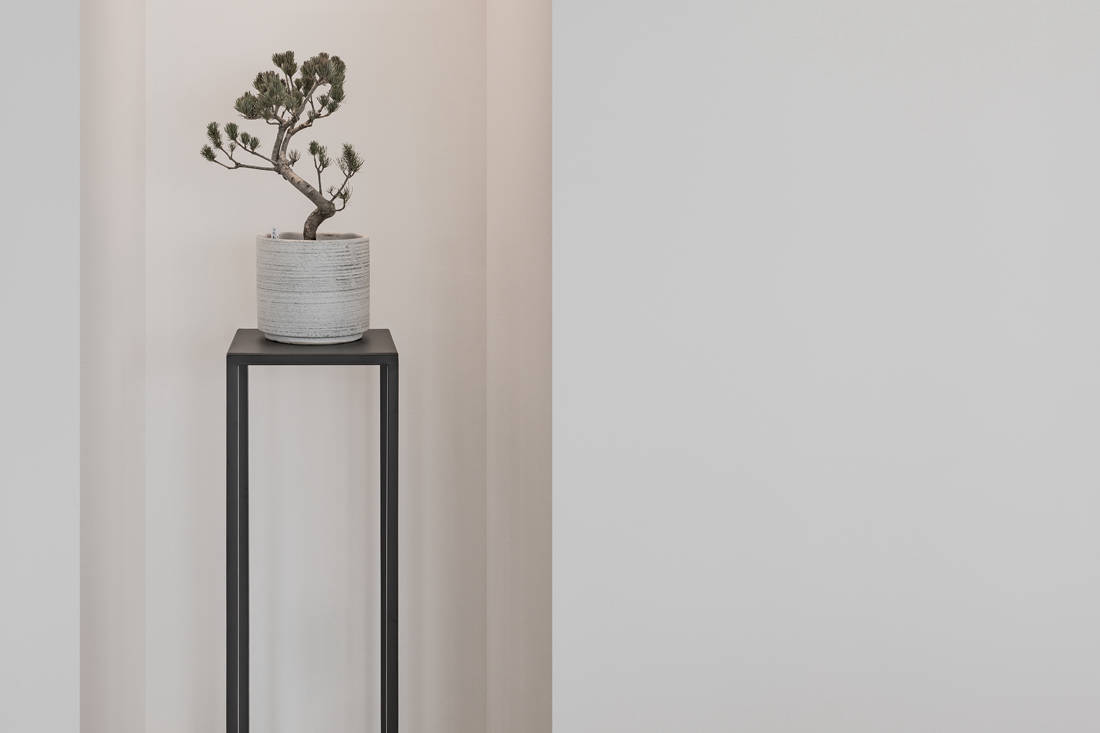 The bonsai feature anchored within a minimalist wall pocket also beautifully captures this clever interplay between open and closed spaces, while maintaining the balance between tranquillity and luxury. Adhering to the Japanese spatial concept of Ma (purposeful negative space that brings to mind the quality of Zen), the mood within achieves a composed way of life that the residents strive for.