Like many first-time homeowners, the couple moving into this 4-room flat had one major request for their interior designer: to make their home look and feel larger than it actually is. It’s a brief that interior designer and stylist Priscilla Tan is familiar with. Armed with her design expertise and visual tricks, she has given this 1,001-sqft flat a roomy urban style that’s rich with patterns and textures.

“The couple wanted a bohemian urban style, with a good mix of wood textures, contemporary patterns and colours,” says Priscilla. She further elevated the look with unexpected design elements and a playful material palette, thanks in part to the homeowners’ willingness to try something less conventional. But more than just a visual statement, the designer wanted the home to feel cosy and casual. 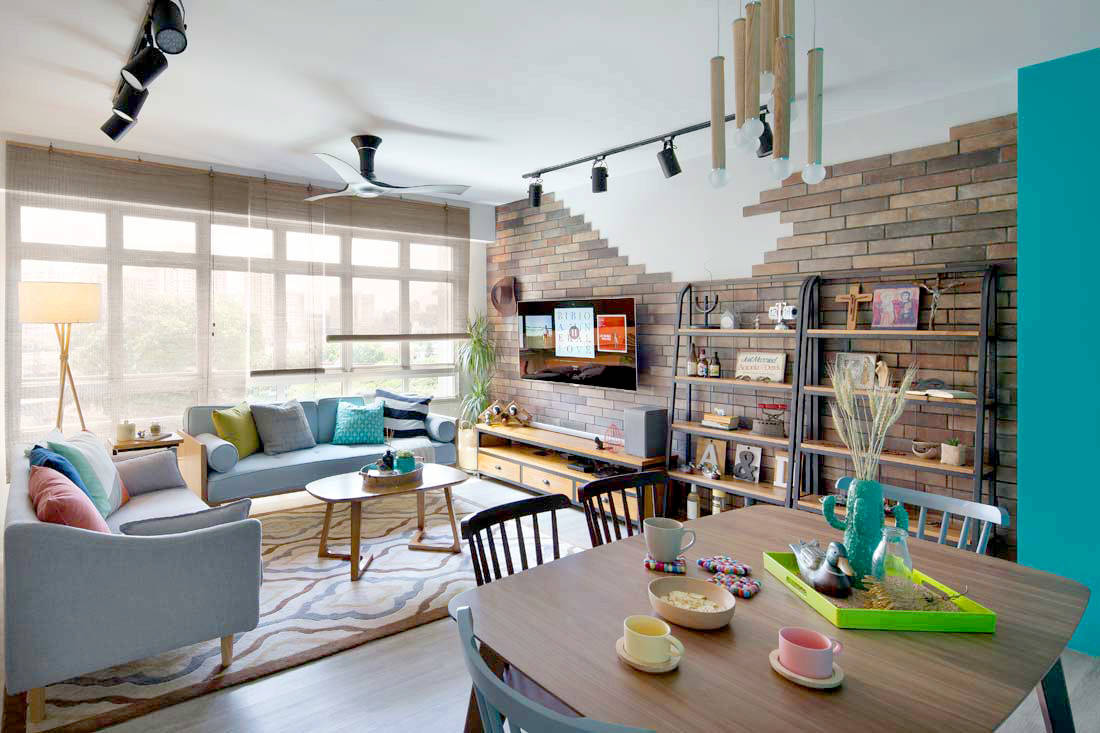 Take the living area, for example. It exudes a slight rustic charm, thanks to the use of wood patterns on the floor, low-slung furniture and a television feature wall clad in brick-like panels. “We wanted a brick wall design unlike the common ones you see in many other homes. Just as importantly, we didn’t want the brick wall to feel like it was weighing down the look of the living room,” Priscilla says. To this end, the designer created an “unfinished” brick wall, further lending to the casual bohemian look the homeowners had requested for.

Another interior design trick that Priscilla employed in this home was the blending of neutral colours. To encourage the illusion of space, she painted the ceiling in the same shade of light grey as the feature wall. This subtle design detail creates a “seamless flow, rather than a stark contrast” in this room, Priscilla explains. 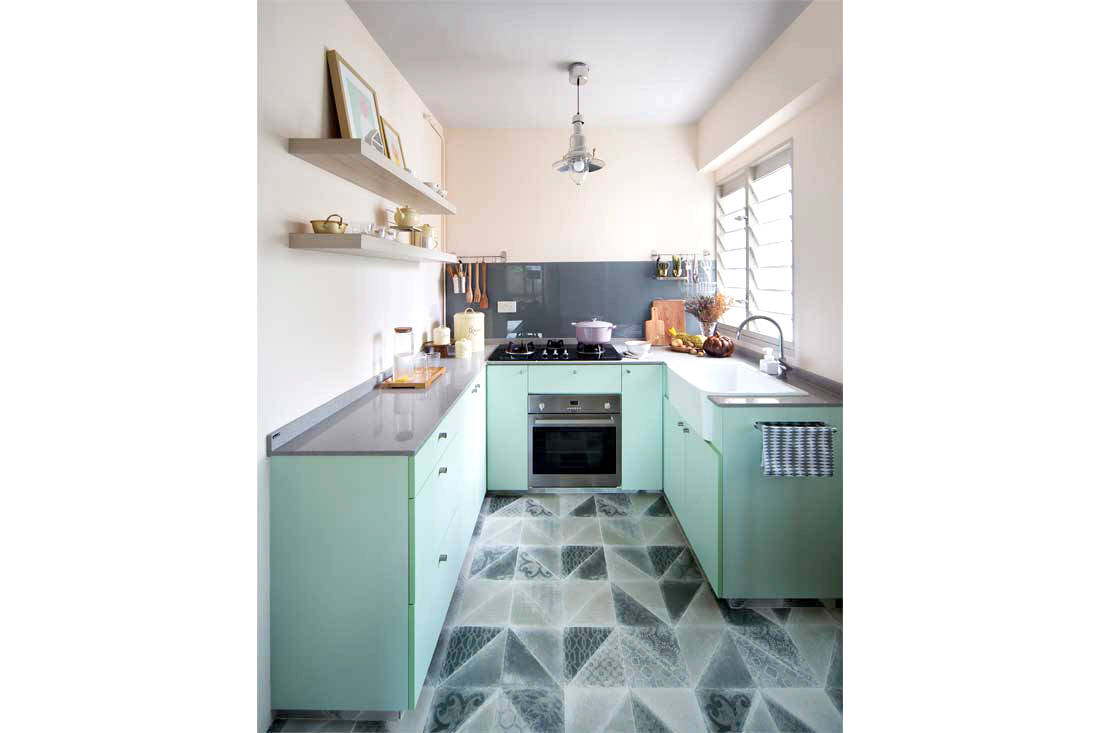 As with most HDB flats, the kitchen is relatively small, making it “one of the hardest places to work with” according to Priscilla. To visually open up the space, she made do without the top-hung cabinets and opted for open shelves instead. This is then paired with a U-shaped cabinet configuration, providing all the storage the homeowners need in their kitchen.

Also of note is the use of pastel colours, a design decision that immediately brightens the space and prevents it from looking dreary. Mint green is used on the cabinets with pastel peach on the walls. To balance out the colour palette, Priscilla used grey as the base colour, found on the homogenous floor tiles (with striking patterns that deserve a second look), the quartz kitchen counter, and a spray-painted tempered glass backsplash. 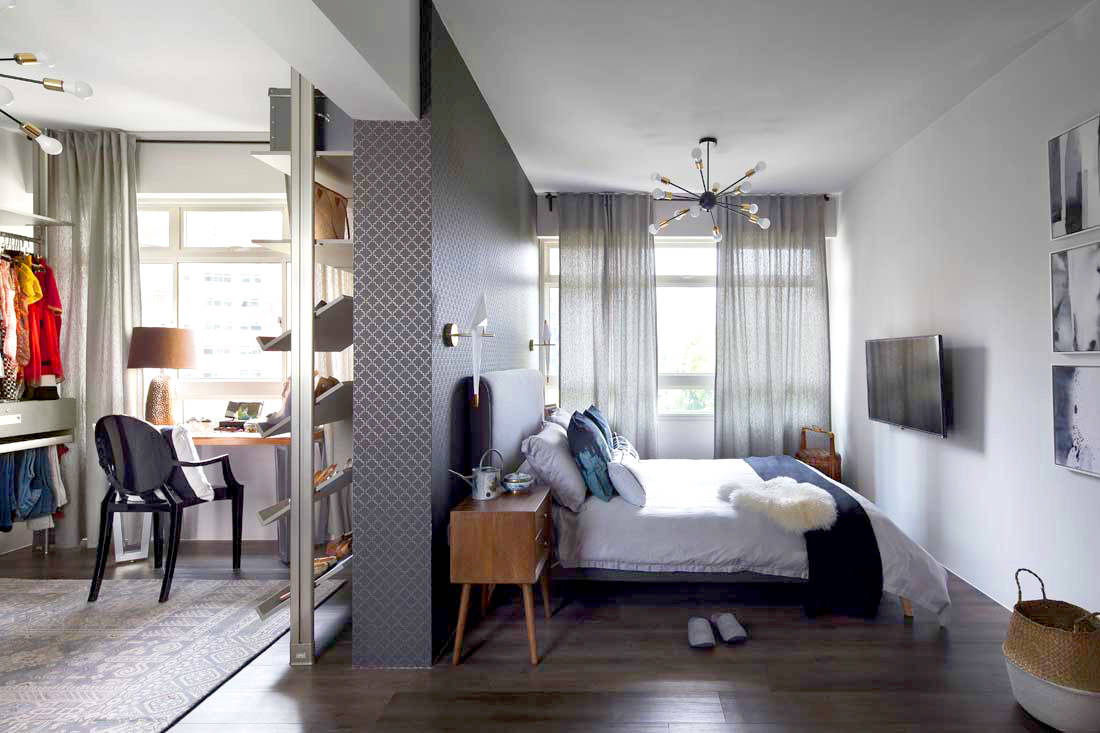 Two bedrooms were combined to form the master bedroom with an en suite walk-in wardrobe. The laidback bohemian vibes continue here, with a graphic wallpaper featuring a darker pattern. Paired with the grey walls and dark walnut vinyl floors, this is a zone for quiet rest and relaxation. “I wanted the space to feel intimate and cosy, immediately as you step in,” says Priscilla, adding, “I also chose similar dark walnut furniture to keep the space clean and uncluttered, despite the open-concept wardrobe system where everything is exposed.” 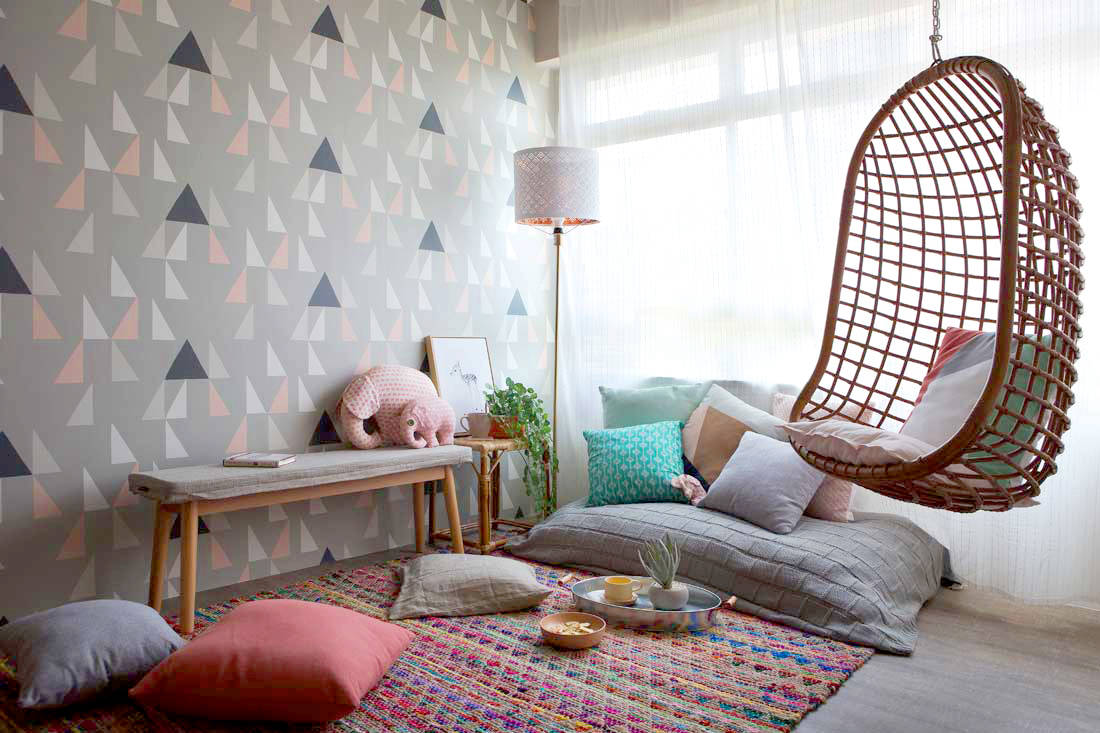 Equally as impressive is the guest room, which features a cosy yet playful concept that befits the multipurpose space. A patterned wallpaper, graphic fabrics and colourful rugs come together to create a relaxed room that truly embodies the boho vibe. “The fun part was sourcing for the rattan pieces in the room,” Priscilla adds. “We got some great secondhand deals!”

From the adventurous use of colours, prints and patterns, to the rustic accents peppering the apartment, this is a home that dares to juggle a variety of design elements.