A minimalist condo with masculine touches

Unity ID conceptualised a sleek and stylish home dominated by dark colours for a family of three.

Previously living in an all-white apartment, the homeowners wanted something completely different for their new home and entrusted Kef Tan and Kelly Chin of Unity ID with their design ideas. What came out of the collaboration is a stylish and sleek space dominated by dark colours and luxurious finishes.

Setting the scene for the rest of the apartment is the entrance, which features nothing but a row of mirrored panels built flush against the wall. Reflecting a boutique-inspired look, the bronze-tinted floor-to-ceiling mirrors conceal the home’s electrical box outlet and the shoe cabinet. 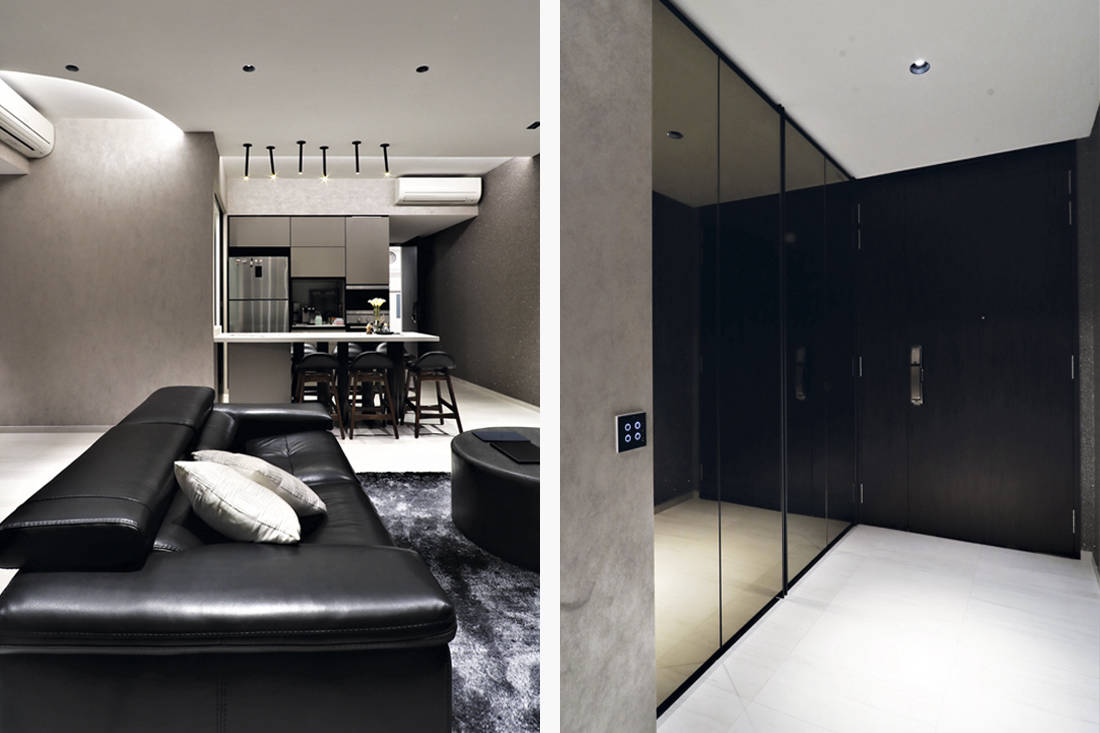 The man of the house – a design-conscious techie – worked closely with Unity ID to automate the entire house with a voice-activated system. Clad in elegant, dark grey wallcoverings from Goodrich that are made of minerals, the walls in the common area shimmer in the light. This element of modern luxury is juxtaposed with quirky accessories such as the irregularly arranged tube lights from Sol Luminaire, which the designers replicated for the legs of the island counter. The crescent-shaped cove lighting by the air-conditioning unit adds to the whimsy as well. 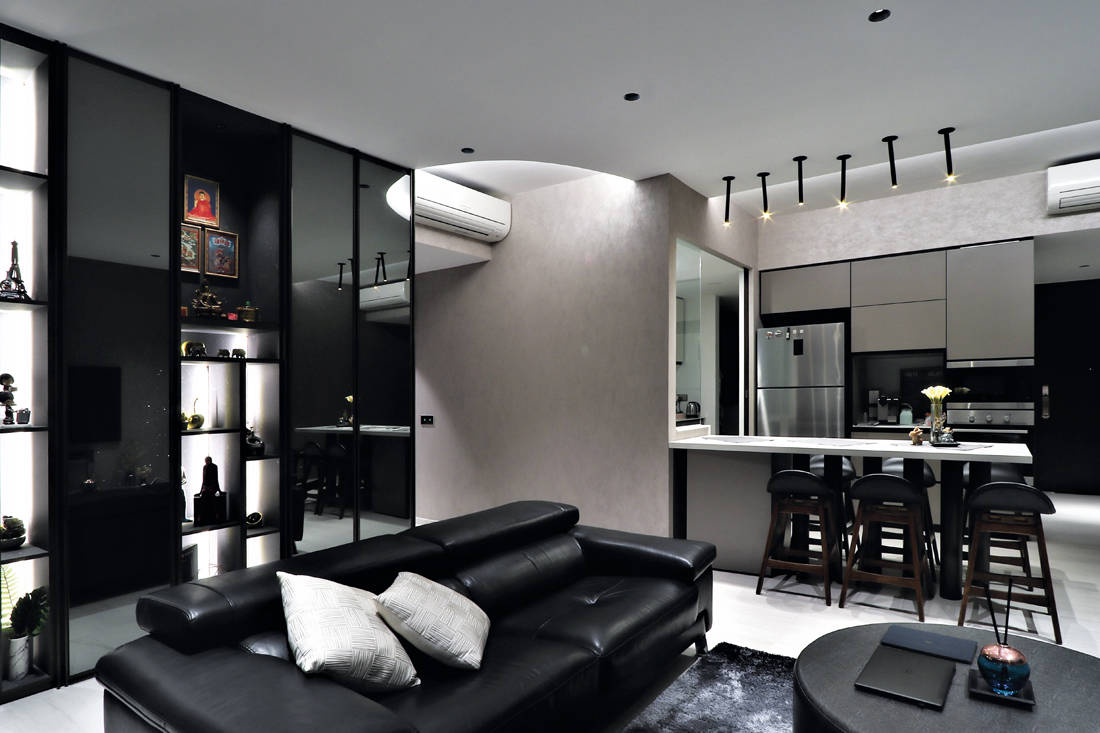 Behind the sofa, a customised open and closed storage unit houses an altar, designed with a modern twist to suit the apartment. The husband and son, both Lego fanatics, use the storage unit to display their collection of sculptures – some of which are world landmarks – as well. 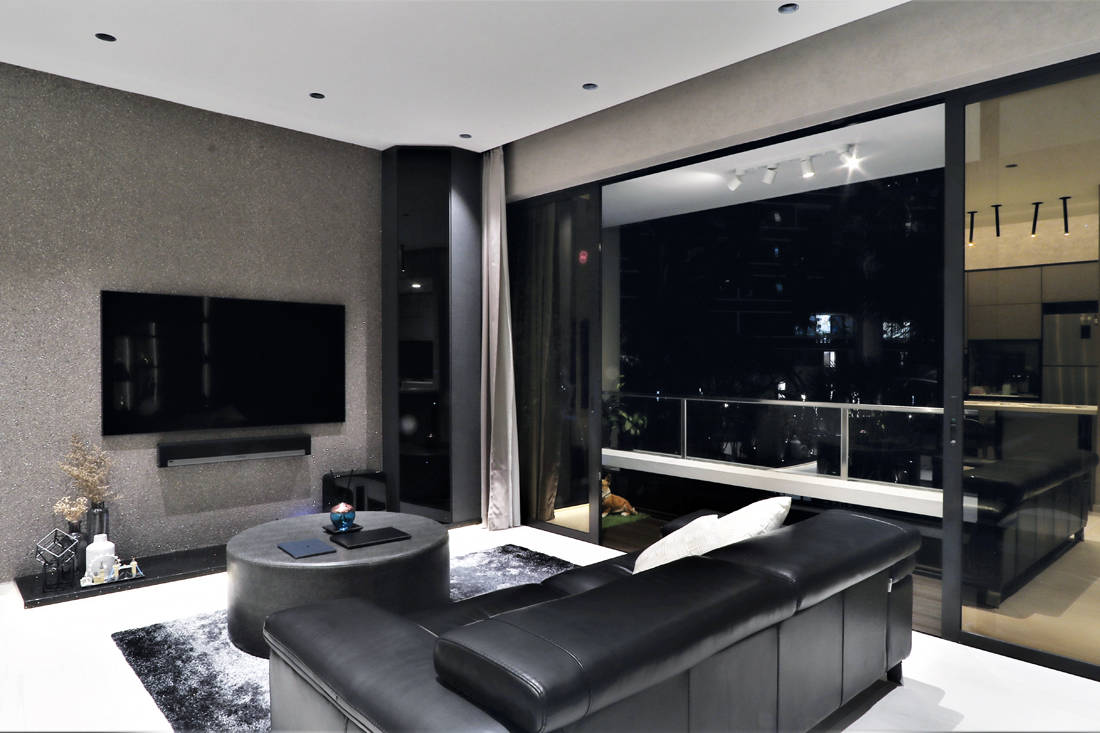 A vertical TV console is shifted to the corner of the living room, while a slab of black quartz – on the floor – replaces its spot as a minimalist statement piece. To balance out the cool tones of the interior, the designers gave the balcony windows a bronze tint, which brings a cosy warmth to the space. 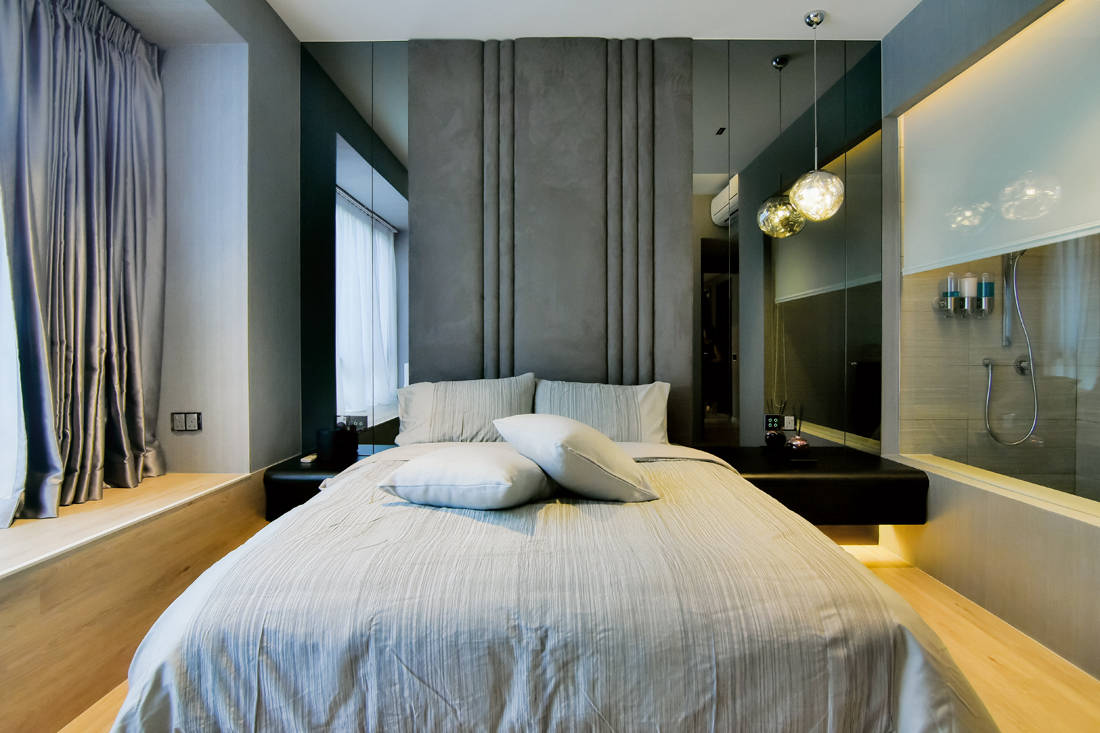 Subtle upscale details, such as the upholstered headboard, the bespoke black leather bedside tables, the mirrored walls, and the greyish wallpaper with a ‘furry finish’, lend a lavish touch to the master bedroom. Inspired by luxury hotels, the exposed bathroom is the piece de resistance of the space. 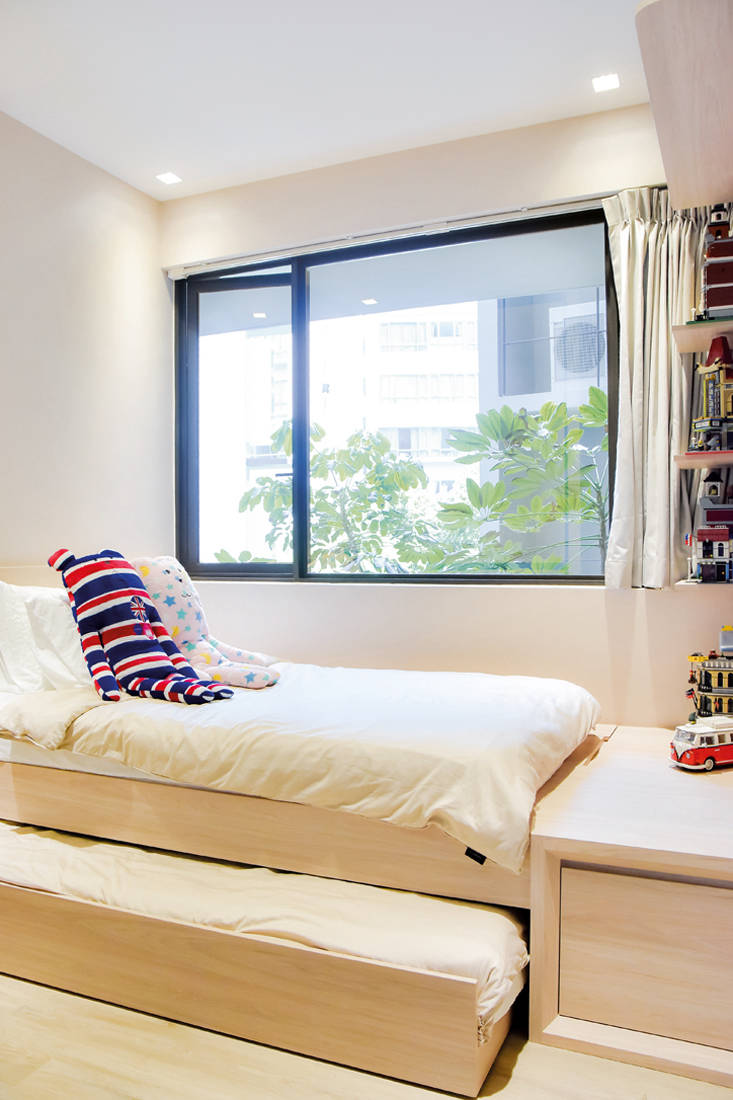 Sporting a different look from the common areas, the guest bedroom features light-coloured, maple-like carpentry, yet keeps to the minimalist design scheme by building a platform for the bed that spans the entire length of the wall. It includes a pull-out mattress underneath, a storage cabinet and a surface for toy display. 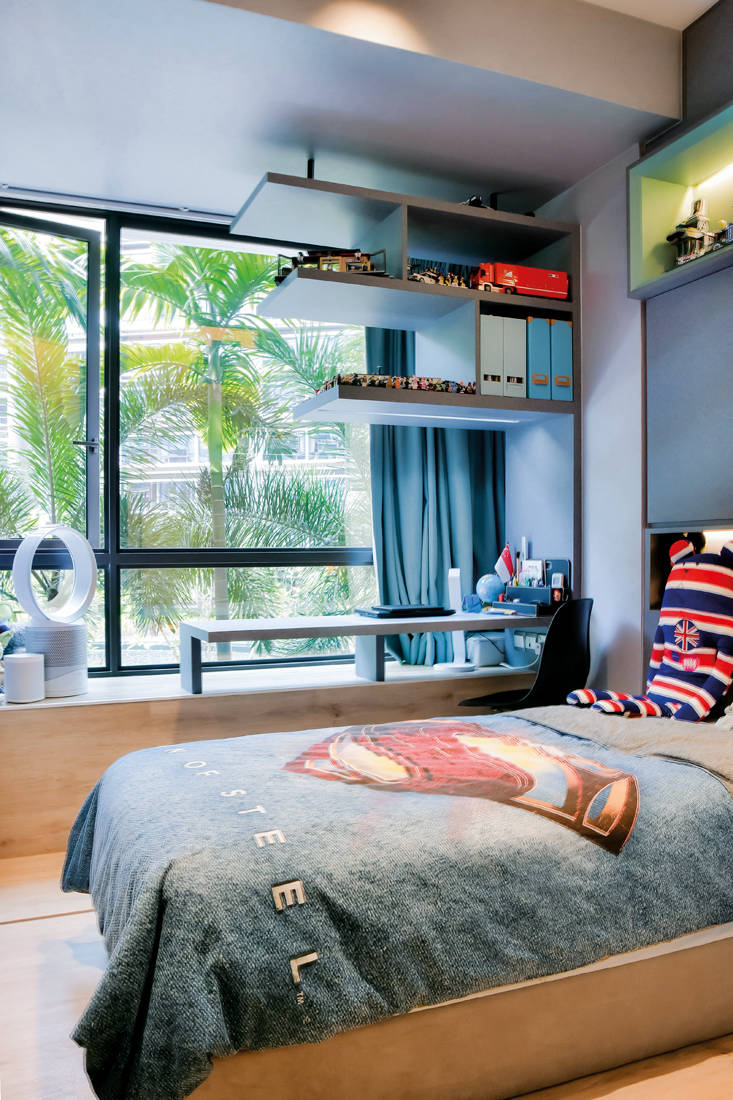 The highlight of the son’s bedroom is the impressive custom-made display shelving that extends from the wall. It is where the son showcases his extensive collection of Lego toys and automobile figurines. His headboard doubles as a display storage feature as well, while a study desk is built onto the bay window. 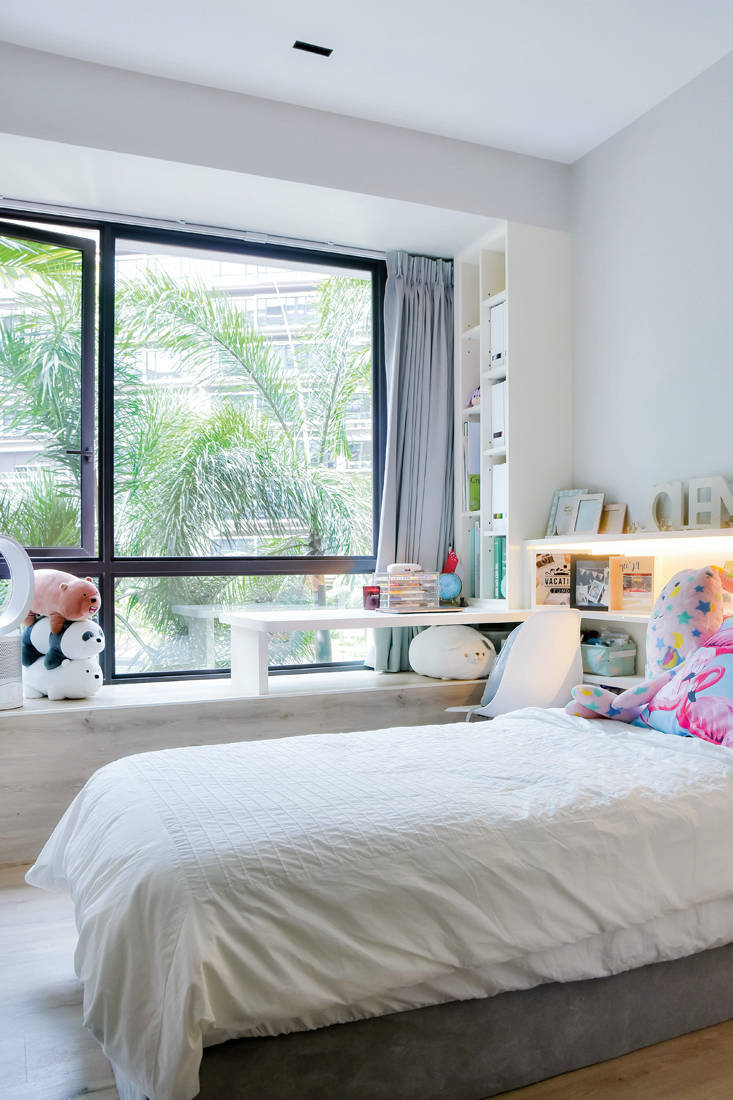 The bay window in the daughter’s bedroom has been fitted with a workstation, raising the height of the ledge and transforming it into a practical mini study area. The designers acceded to her preference for a white colour scheme as well, using white carpentry for the open shelving feature that maximises vertical space.

We think you may also like Minimalist interior design: 6 easy ways to achieve the look