The white interiors with solid ash timber ceiling joists hark back to the rustic whitewashed bricks and sun-bleached timber floors of the owner’s beloved childhood home in Southern France.

The owner’s memories of his childhood greatly influenced the design of this home, which design firm UPSTAIRS_ affectionately calls the White Brick House. According to designer Dennis Cheok, the homeowner desired a material palette reminiscent of a country house’s open spaces, whitewashed timber and raw bricks. The designer emphasises however, “We were also immensely mindful that the end result must be modernised and made relevant to the current place and time; it would be quite easy to produce a ‘theme park’ fantasy.”

The charming brickwork on the townhouse’s façade was what first attracted the current homeowner to this property. The building was constructed from red bricks in the seventies and had undergone several rounds of modification over the years. As the design team stripped the house of its layers of plasterwork and flooring built up from alterations over the years, they made exciting discoveries of pre-existing wall bricks and even kitchen floor tiles. These layers of original and modified architectural elements greatly informed the design approach. 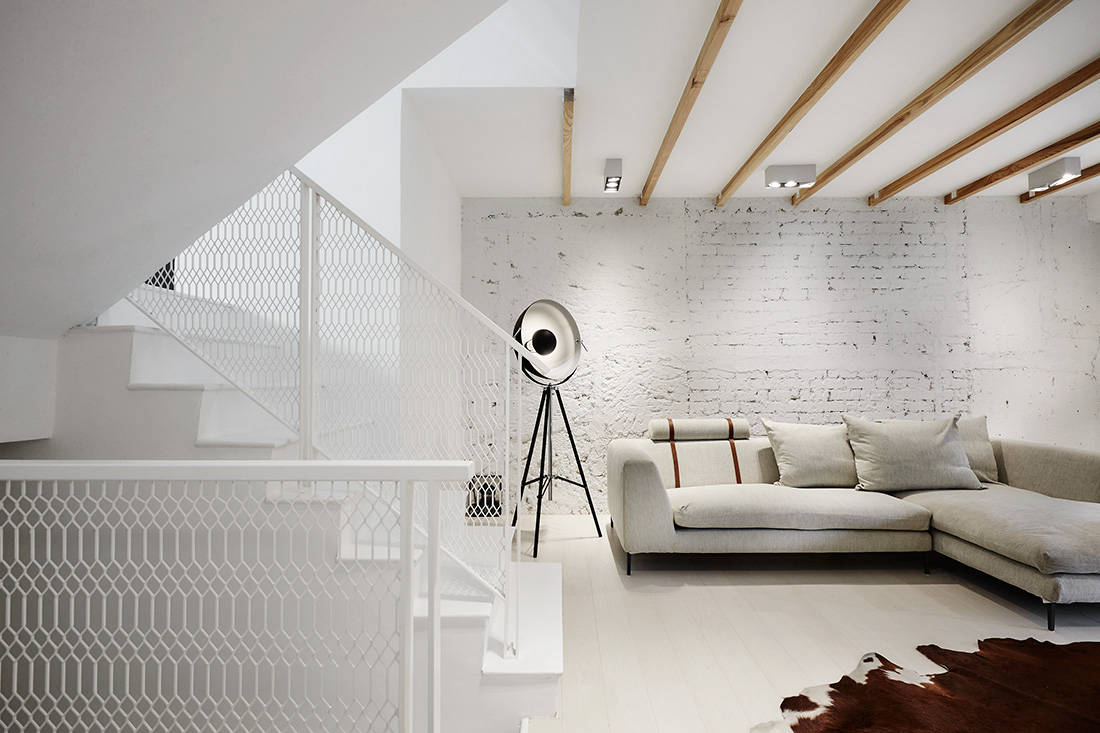 A particular challenge was the existence of the many nooks, crannies and tight alcoves found in the master bedroom, study mezzanines, and even the stairway. Dennis shares, “Although many of them were not the most usable in terms of size and form, these nooks and crannies tend to be spatially interesting—a split-level here, a skylight there. We reimagined these as nooks for living or resting, and it was important to us that they contributed spatially dynamically—to lend depth, light and meaning—for each of the main rooms that they occupy.” 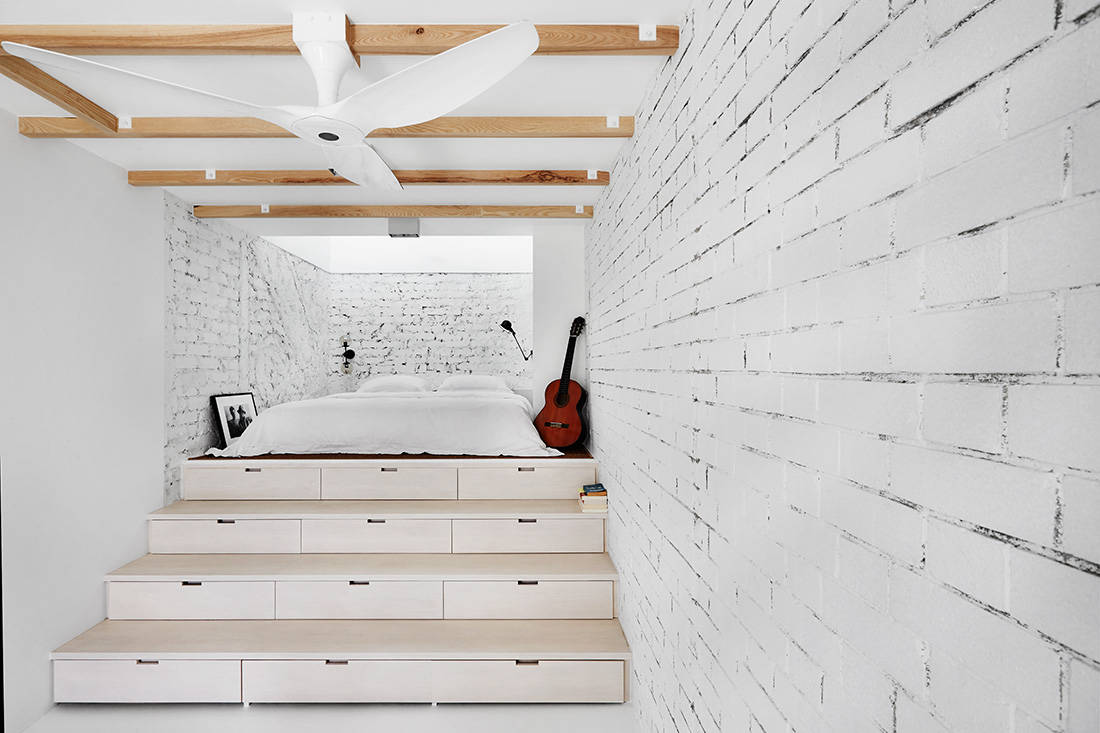 In the master bedroom, an intimate sleep alcove was created out of an otherwise odd elevated corner. Natural sisal built into the platform surface gives warmth and texture. A freestanding clawfoot bathtub is placed within the bedroom and leads to an adjoining bathroom with a fully custom-made marble basin counter. 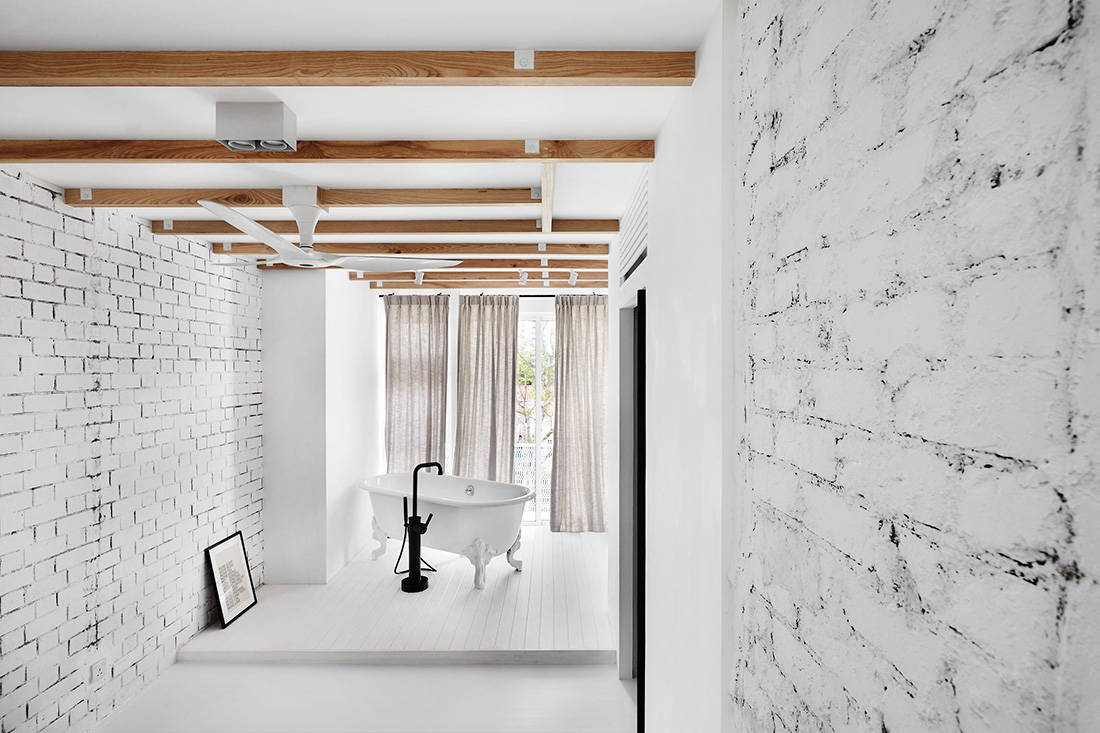 In the bedroom designed for the homeowner’s son, the bed was custom built in solid pinewood and plywood timber pallet. The room also has a study alcove built entirely in raw plywood. 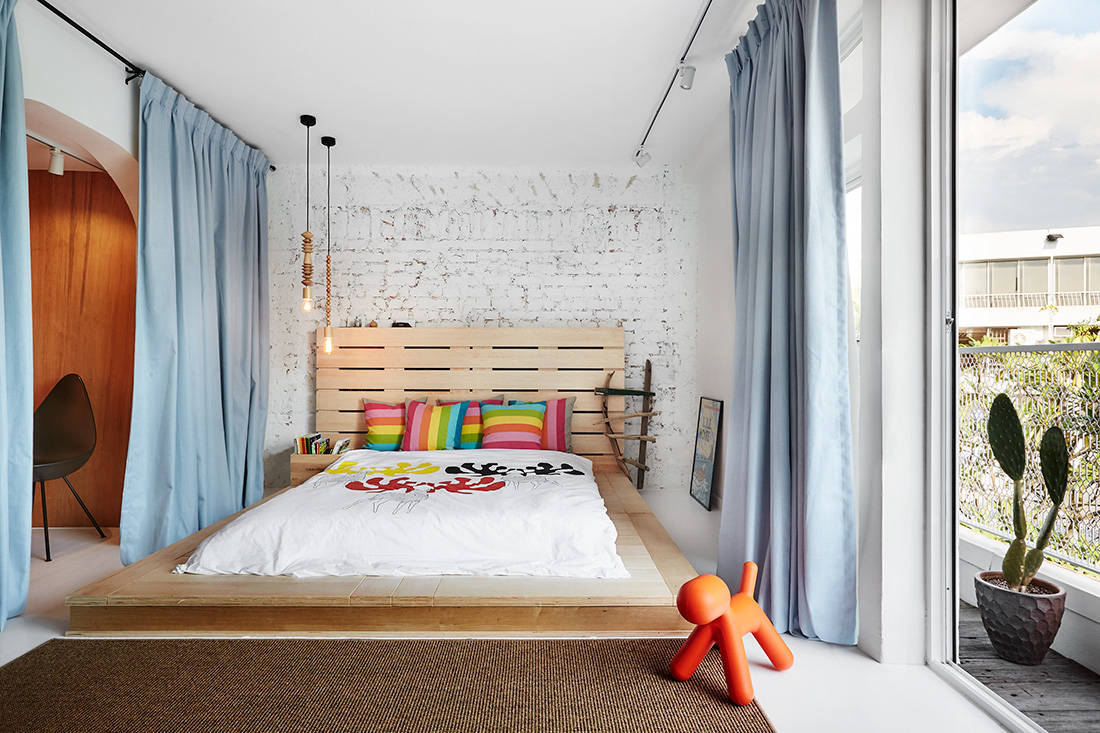 Another objective was to create a sense of flow between spaces, given the odd layout. It was especially important for the homeowner that the social spaces for living and entertaining would have an ease about them, that one could move across the patio, lounge, dining and outdoor terrace intuitively. 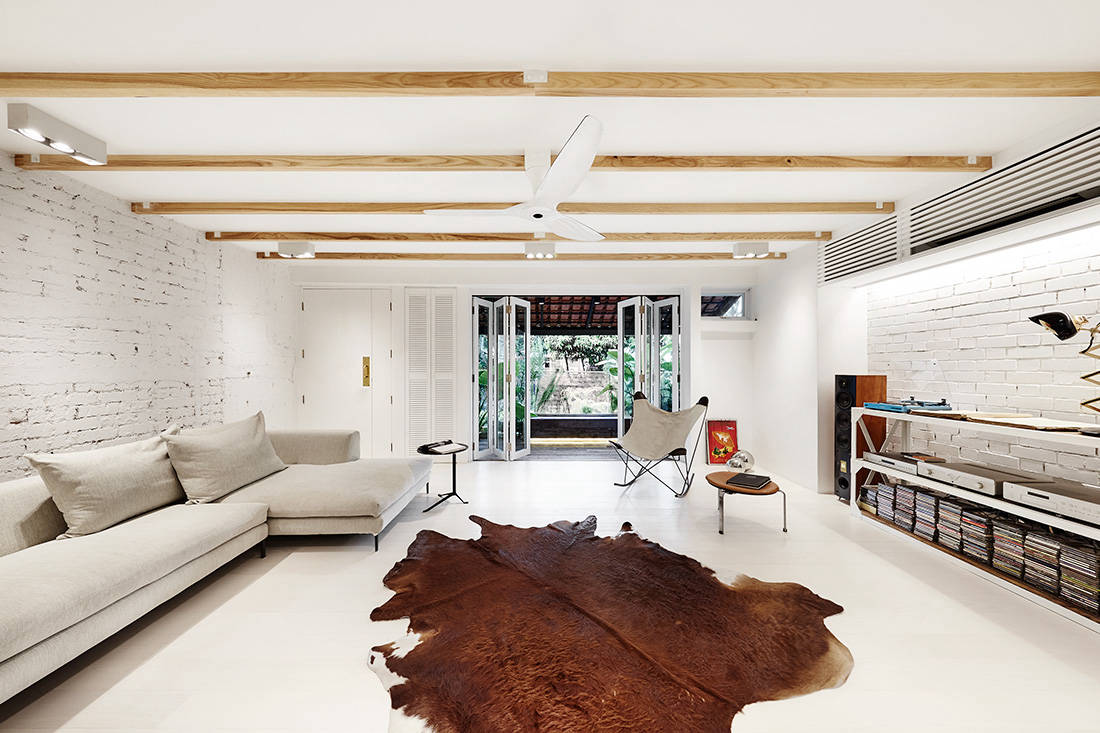 This was achieved by designing the spatial flow to begin from the front garden patio into the living hall that is connected with an elevated dining and kitchen space, before culminating with the rear patio that terminates with an elevated deck that overlooks the sprawling forested townscape. 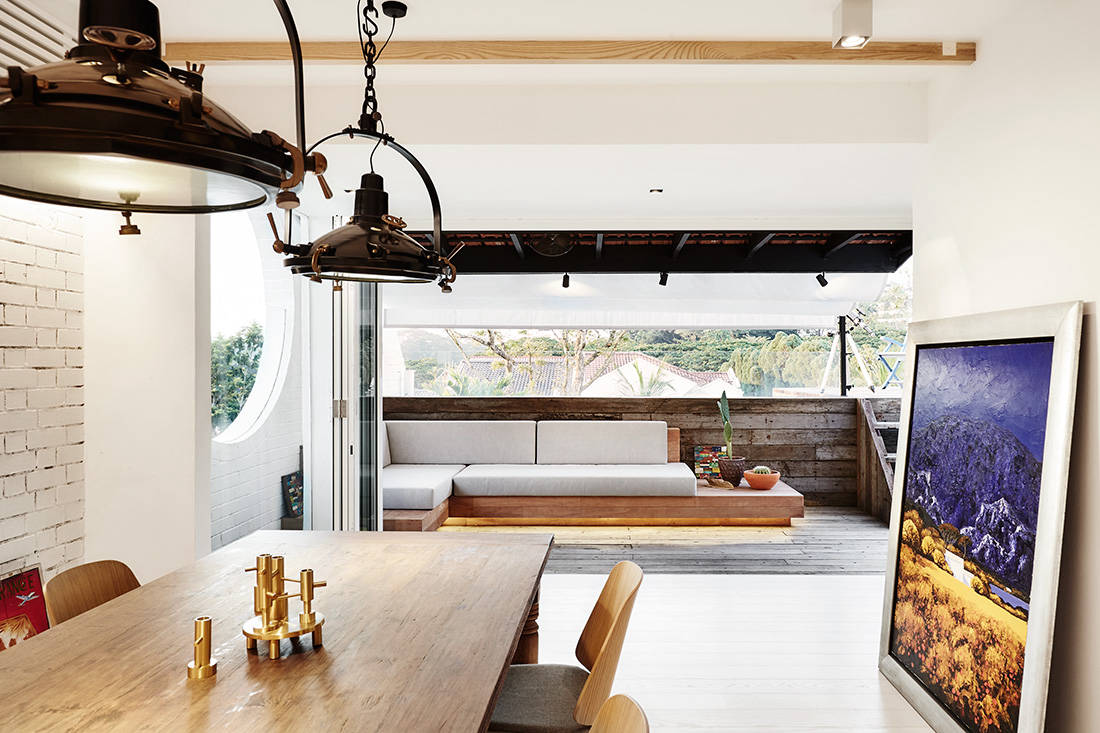 Recycled sun-bleached timbers are used for the patio areas which were custom-designed for a water pond area at the front, and formed an outdoor bench and stepped viewing deck at the rear.

Dennis says, “The homeowner and his son were absolutely hands-on with the design process, and they both came to the table very clear about their personal preferences. He was also very particular about identifying the spaces and how he imagined himself to use them, and we made ‘discoveries’ together and planned around these ideas. Once it became clear that we were on the same page, he offered us a free hand to reimagine how the entire house would come together.” 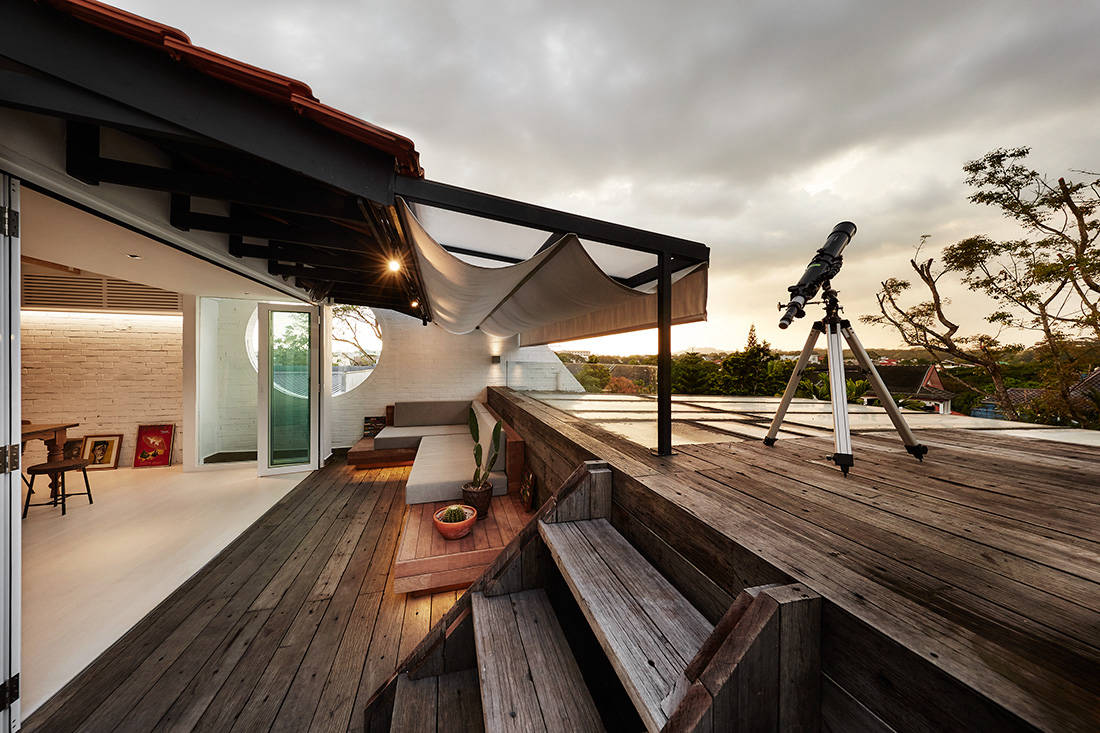 The White Brick House is wonderful in how it homes in on all the things its inhabitants care for, including memories, meaning, and a ‘monster pond’ for their giant snapping pet terrapin.

The homeowner explains, “I wished this house to be an anchor—a base camp I could happily return to after work or after a long trip; a place that makes you feel like you are on holiday even if it is just for that few hours you spend at home after a work day; a place that leads the mind to clarity, peace and creativity. It should be a place that returns the mind to the basics; and also, a place that encapsulates the nostalgia I have of my childhood—all while being functional and stripped of superfluous elements.”

This home was first featured in Lookbox Living Issue #53. Grab a copy at your favourite newsstand!