Inside the home of fashion photographer Sazeli Jalal

What do you expect when you step into the home of a fashion photographer? Will it be an extension of his creative portfolio or a staid dichotomy as a respite from work? In the case of Sazeli Jalal, it was his massive love for colours that influenced the design of his penthouse in Sembawang. 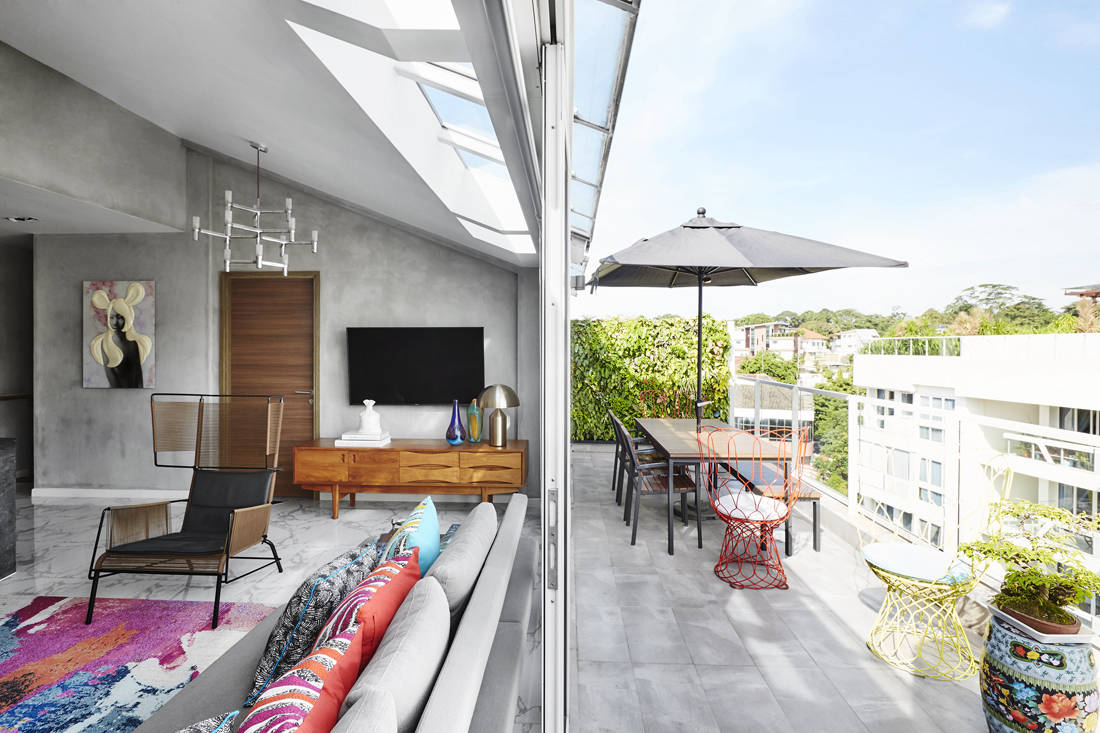 The self-taught photographer was trained in interior design but found his professional calling in the field of fashion photography. When it came to his pad however, Sazeli Jalal took it upon himself to design and furnish it. He first came up with a moodboard, and together with Jack Ong, who shares the apartment with him, decided on the look and the furnishing that would best reflect their individual styles. “Studying interior design in college came in useful after all,” Sazeli chuckles as they talk about the process of doing up this two-storey apartment.

“We were influenced by art galleries. We like visiting galleries and that gave us the idea to have cement screed walls for our art pieces,” explains Sazeli. The duo have been collecting art for over ten years and have chalked up quite a sizeable collection. It’s no wonder that one of their priorities was to be able to display these art pieces in the apartment. Instead of plastering only selected walls with cement screed, they decided to have all the walls undergo the same treatment, creating not just a cohesive look but also allowing them the freedom to put up art pieces on any wall. 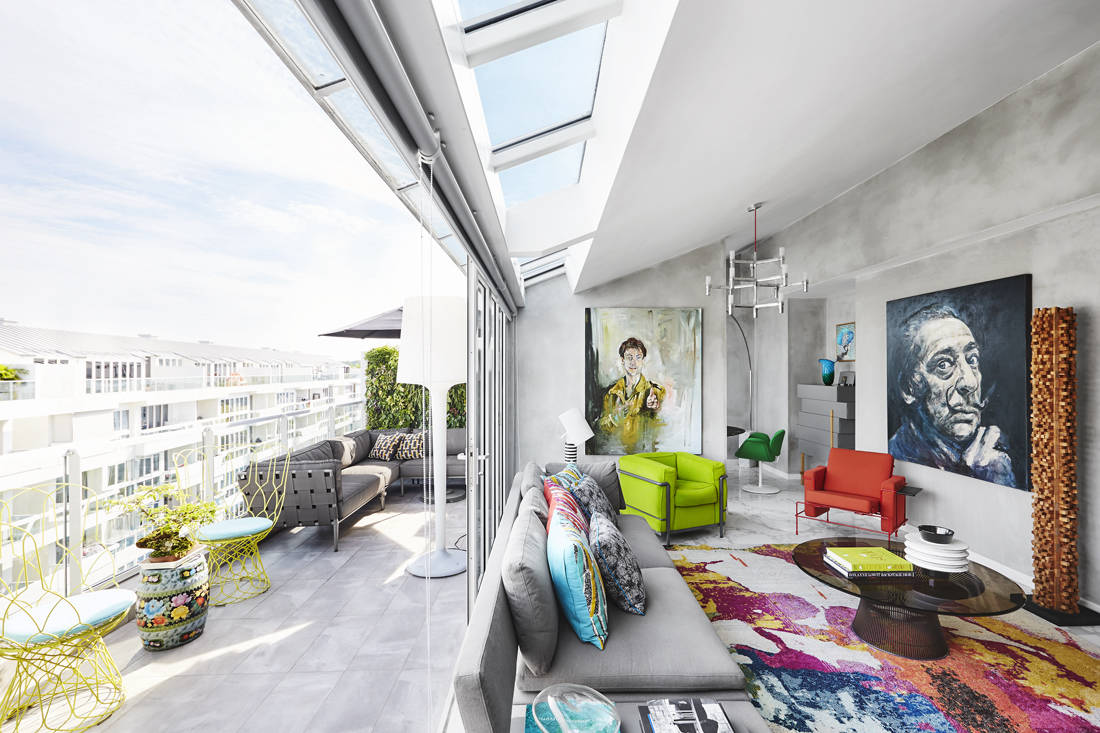 Clearly satisfied with their choice wall finishing, Sazeli says, “Because the texture is quite raw, the artwork really pops. It helps to bring out the colour of the art.” Besides being the perfect canvas for artwork, the cement screed walls also serve as an ideal backdrop to the colourful furniture pieces and accessories that Sazeli and Jack have chosen.

Sazeli’s love for colour is shown in his choice of a bright green version of the Cassina LC2 armchair. “Many of my designer friends were shocked and asked, ‘Are you sure you’re going to get lime green?’” Sazeli recounts, “But when they come here, they find that it’s quite easy on the eye. The colours complement one another.” 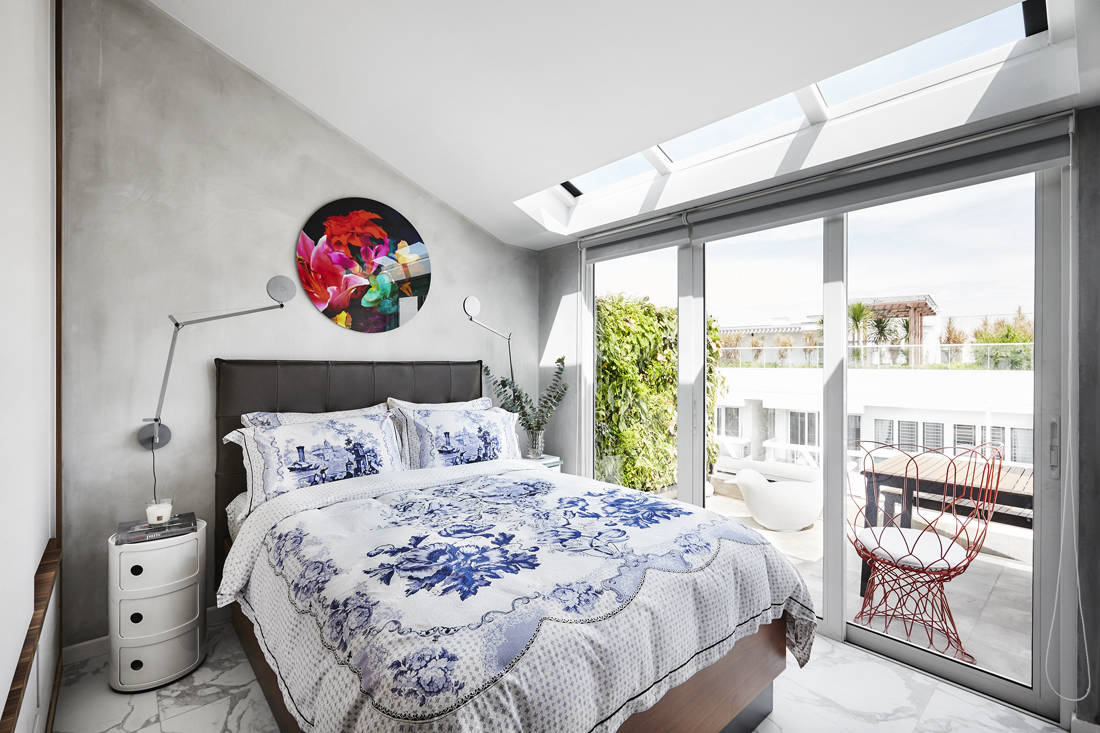 Even though the pair moved into this condominium unit in 2015, it was only about a year later that the apartment was considered ‘fully furnished’. The collective process of sourcing, purchasing and awaiting the arrival of their orders took about ten months, as they bought their furniture pieces from a variety of shops. 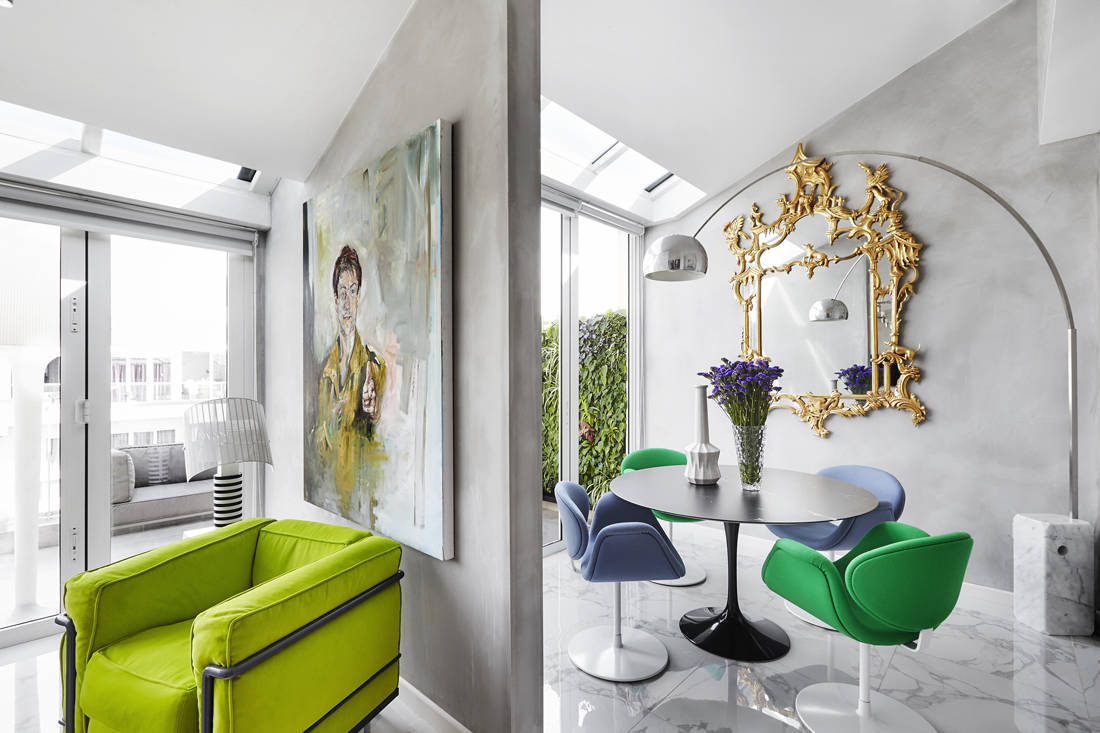 The final pieces of the puzzle were the chairs for the dining room. It was a toss up between two designs that both of them liked. They had such a hard time deciding between the two that they even took to Facebook to get friends and family to weigh in on the decision! Jack lets on, “In the end, it was the colour that made the difference. The other set was black and made of rattan. We were afraid that the dining room would look dim.”

Clad in blue and green, the Artifort Tulip chairs that now sit in the dining room certainly add a sophisticated splash of colour to the space. Explaining his choice of colours, Sazeli says, “The colours were carefully selected to complement the other furniture pieces and the painting.” In fact, Sazeli’s attention to detail goes beyond the choice of colour. The placement of each colour is also planned so that the colours pop in the right places. 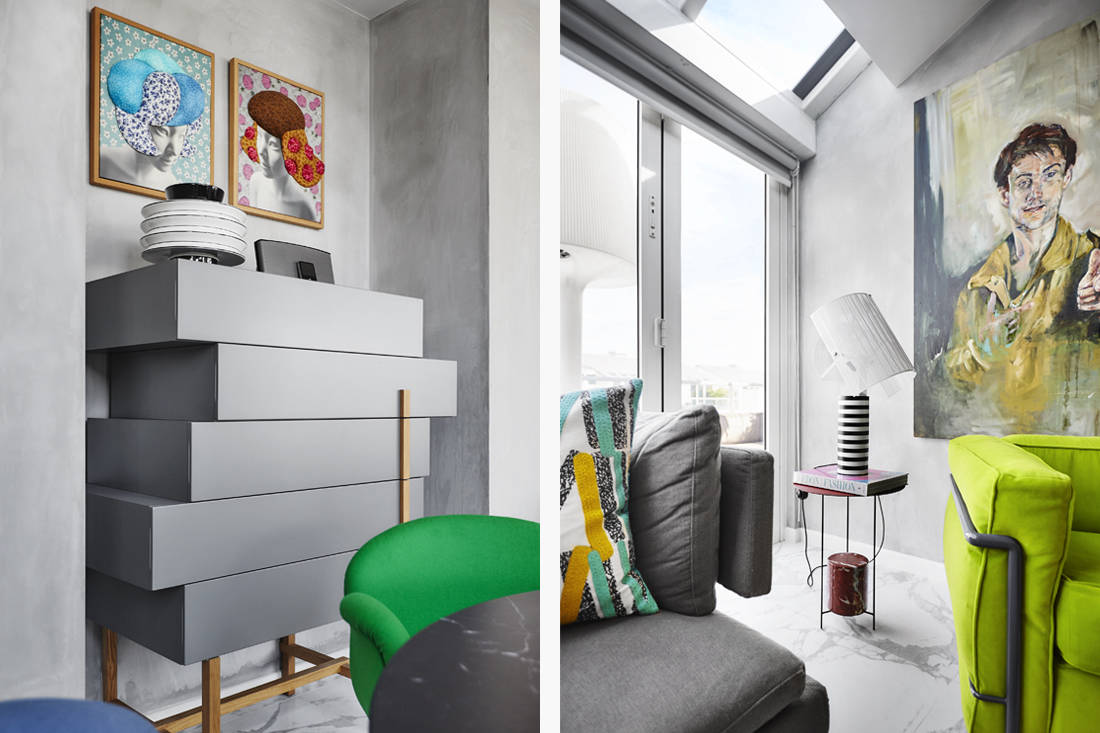 “Due to my work in fashion, we are very detailed, in terms of hair, make up, and colours,” he adds with a laugh. “Being sensitive to colour is a work hazard and I’m very particular about the different shades. If it’s green, it has to be an exact shade of green.” 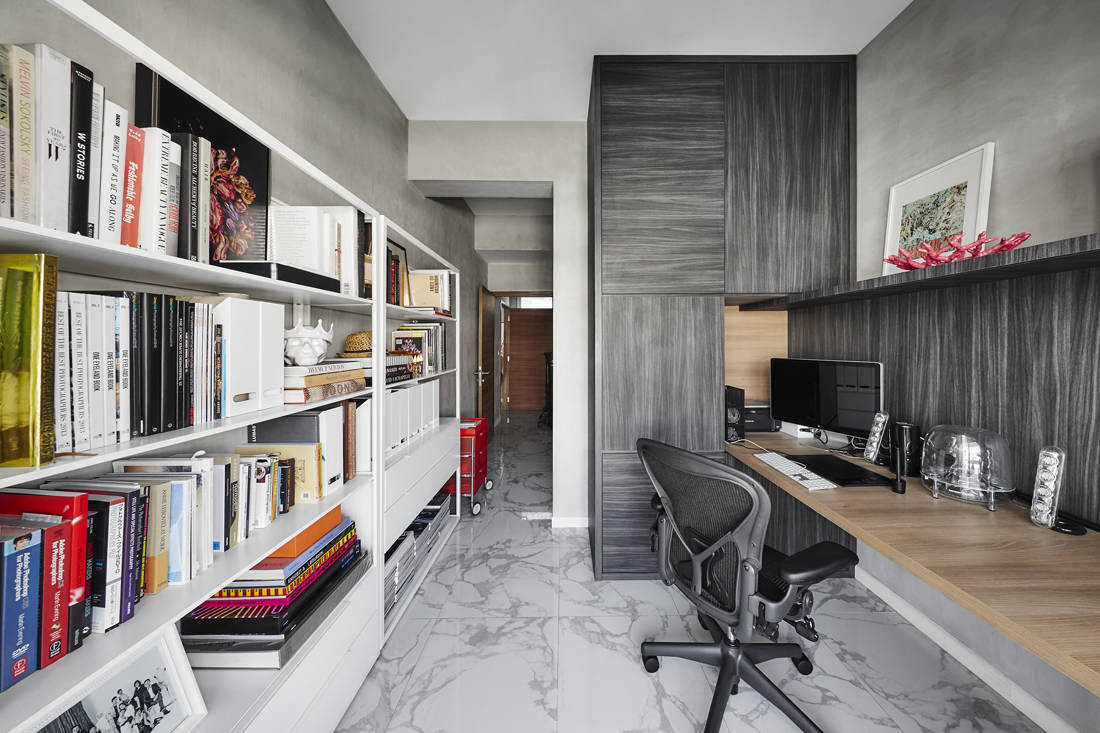 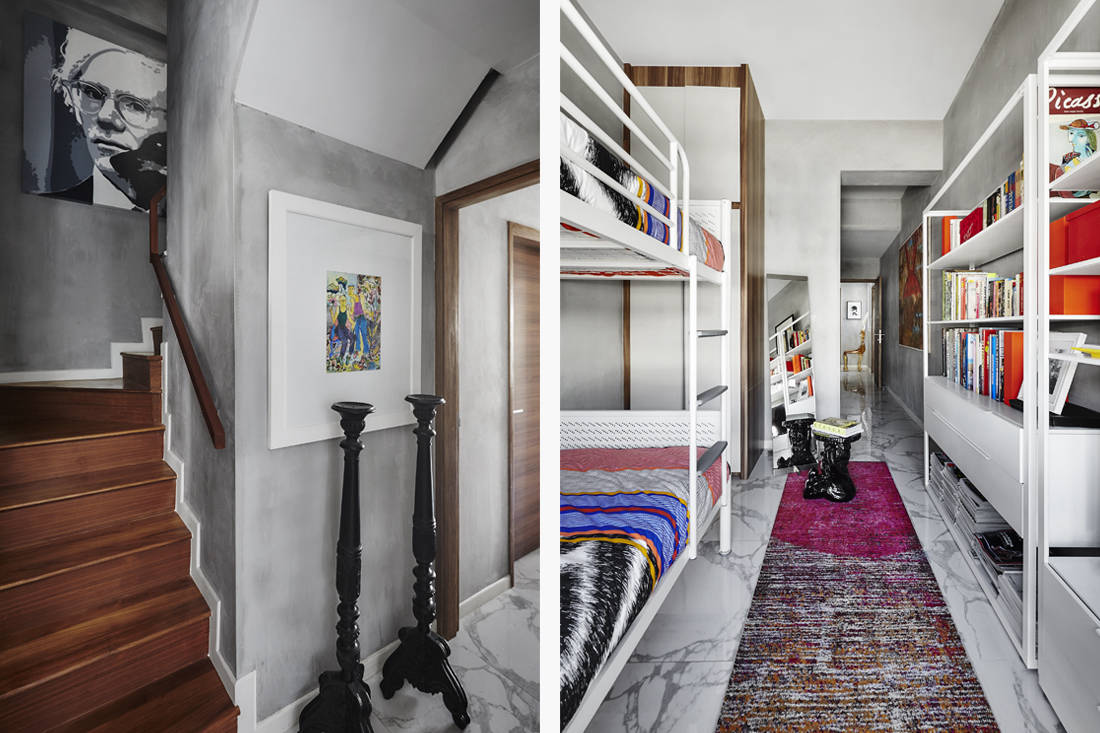 It’s this labour of love that results in a home brimming with personality and flair. From the placement of art to the choice of furniture to the bold use of colour, Sazeli Jalal and Jack Ong made a concerted effort to imbue their home with their own unique take on design. This home is indeed a work of art, where every brush stroke and every dab of colour culminates in the final artwork.