A Sydney penthouse designed for entertaining

Iconic Sydney-based studio Arent&Pyke employ a solution-based understanding on design for entertaining to transform this Darling Point Penthouse into the ultimate living space for those who love to entertain.

“The initial brief from the client was to completely reimagine the interior, instigated by their initial feeling upon purchasing the apartment that the kitchen in its current state occupied too much of their entertaining ‘real estate’,” says Arent&Pyke co-founder and principal, Juliette Arent. “They knew that the bones of the apartment were great, but the finishes and fittings were outdated and did not suit their lifestyle or aesthetic.” 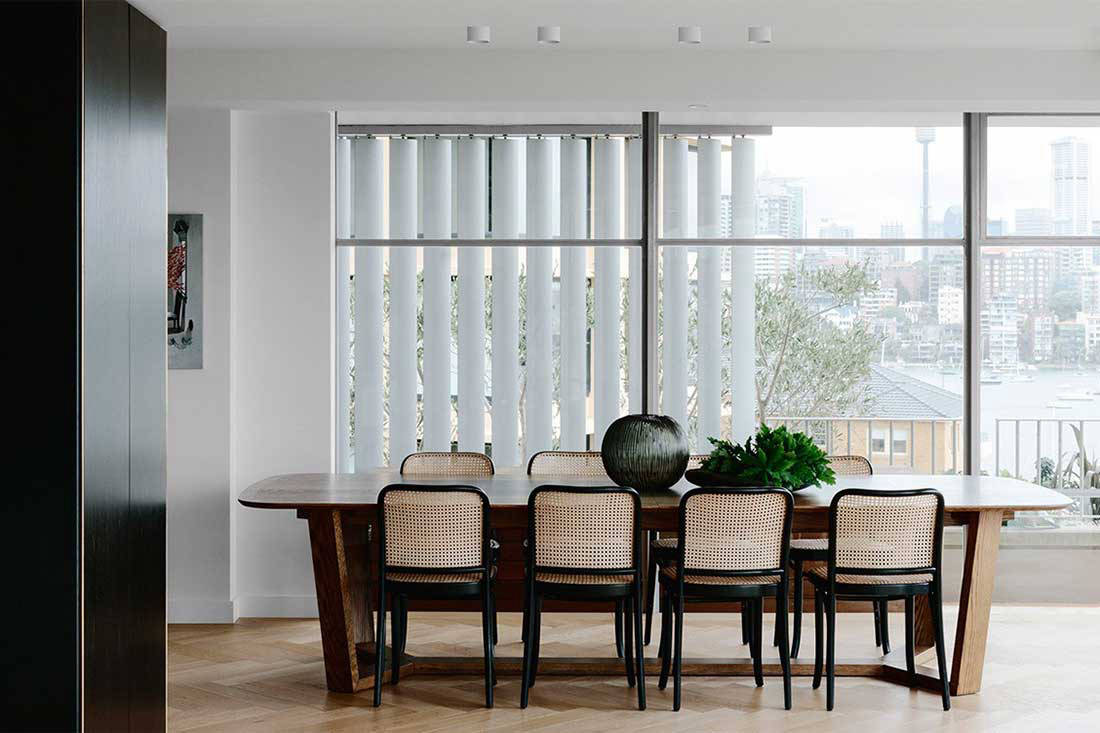 Though initially engaged to rework the kitchen alone, Arent&Pyke saw too many opportunities to design for entertaining cohesively throughout the house and were eventually tasked with undertaking an entire metamorphosis to produce a one-of-a-kind interior including “floors, walls, lighting, custom joinery and furnishings,” says Juliette. And so a larger, more holistic interior concept began to take shape. 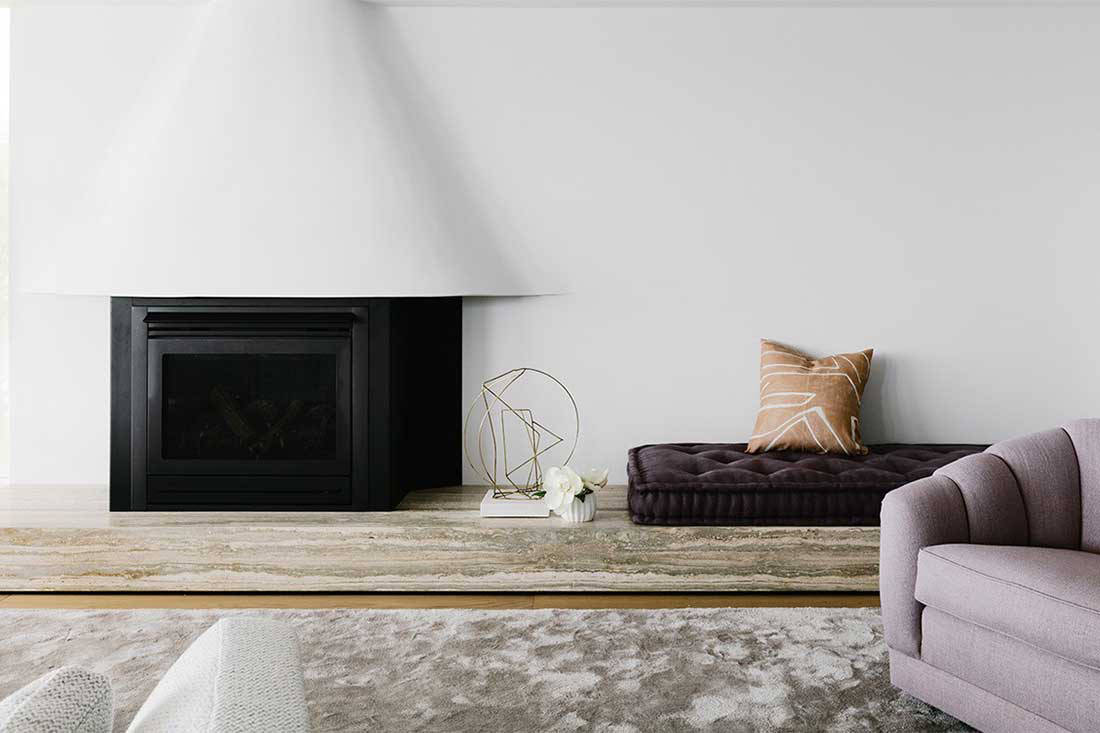 “Rather than compete with the view, we developed a strategy of tonal variation through the introduction of nature oak parquetry floors as the foundation for the soft yet sculptural shapes of the both the built in elements like the custom fireplace as well as the furnishings.”

This stunning legacy apartment on Sydney’s waterfront was not without its challenges – great bones, but a wasteful use of the interior. For example, the apartment has an unusual tapered shape, which opens out toward Sydney Harbour. “We designed the living area to take full advantage of the spectacular views, but also to have an internal focus anchored by the new custom designed fireplace,” says Juliette. 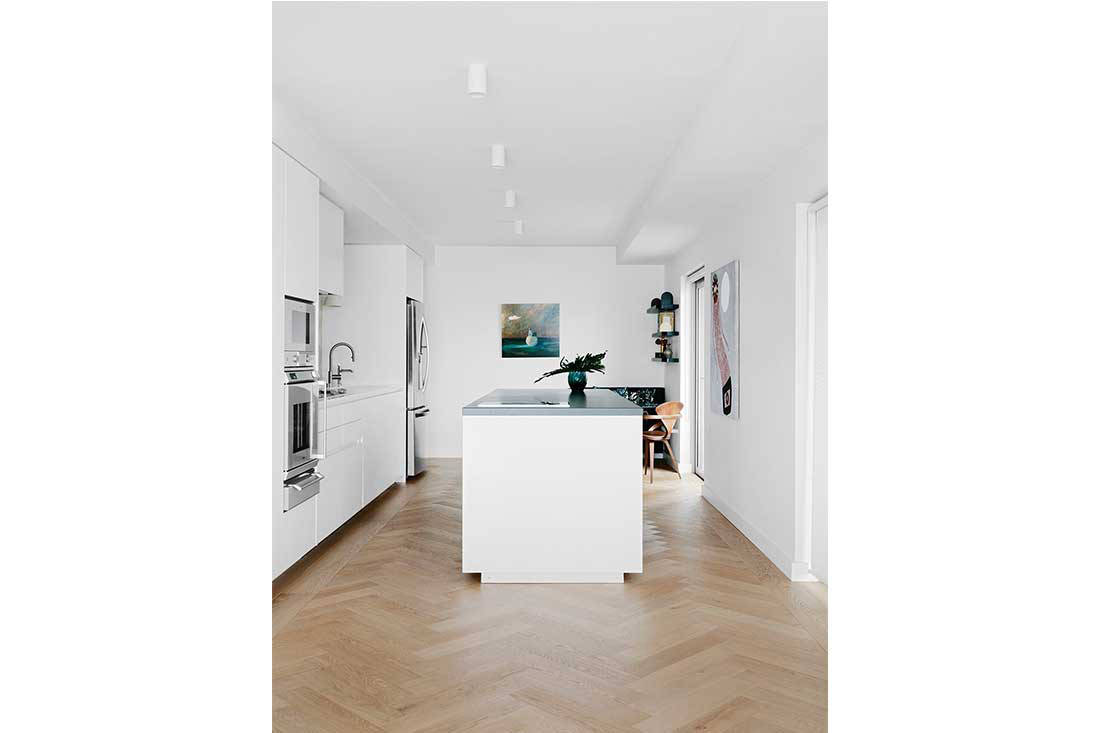 The challenge then, was to rationalise the combined living, dining and kitchen spaces ensuring that all the spaces feel connected yet distinguisged. The irregular symmetry of the spaces meant that the furnishing stage was particularly challenging for the Arent&Pyke team. “We adore working on projects of this nature,” continues Juliettte, “projects where we have the opportunity to really change the way people use and inhabit their spaces.”

The strategic elements of the design are anchored primariliy in the custom designed bookcase, which acts as a spine for the main living space, drawing you toward the view, and links to the bar that we also designed to adjoin the dining space. The existing volumes of this beautiful harbourside residence were then stripped bare, allowing a complete reinvention of the spaces. Iconic, timeless and beautifully-appointed, the soft grey and natural timber base accepts accents of terracotta and emerald, while brass details and navy linen add textural luxury. 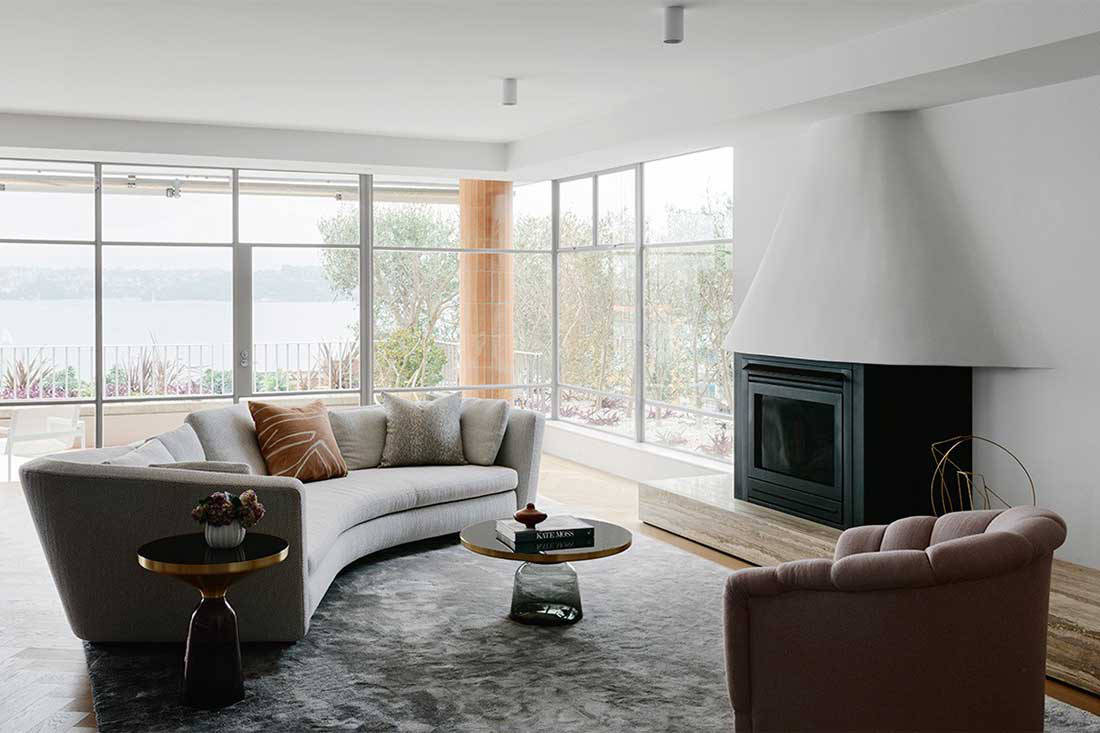 The sculptural shapes of the built elements such as the curve of the fireplace or arch of the bar unit are complemented by the soft curves of the furnishings. Rather than allow these curves to dominate however, the team chose decorative elements that would explore the beauty of surface and texture. Moreover, it was this complexity of nuance that created a foil to the boldness of the bespoke black/brass shelving, which seemingly floats across the parquetry.

Textural variations in the kitchen splash-back, the travertine plinth, and the timber flooring, for example, each deliver a subtle richness to the whole, as does the Minotti rug. Effectively a meditation on curve, tone and texture, the soft sculptural shapes of the built elements, such as the curve of the fireplace, play on the spatial illusion of a curved single colour. This in turn, is complemented by the soft curves of the sofa, side chairs and tables, which introduce textural fabric, glass, brass and colour. 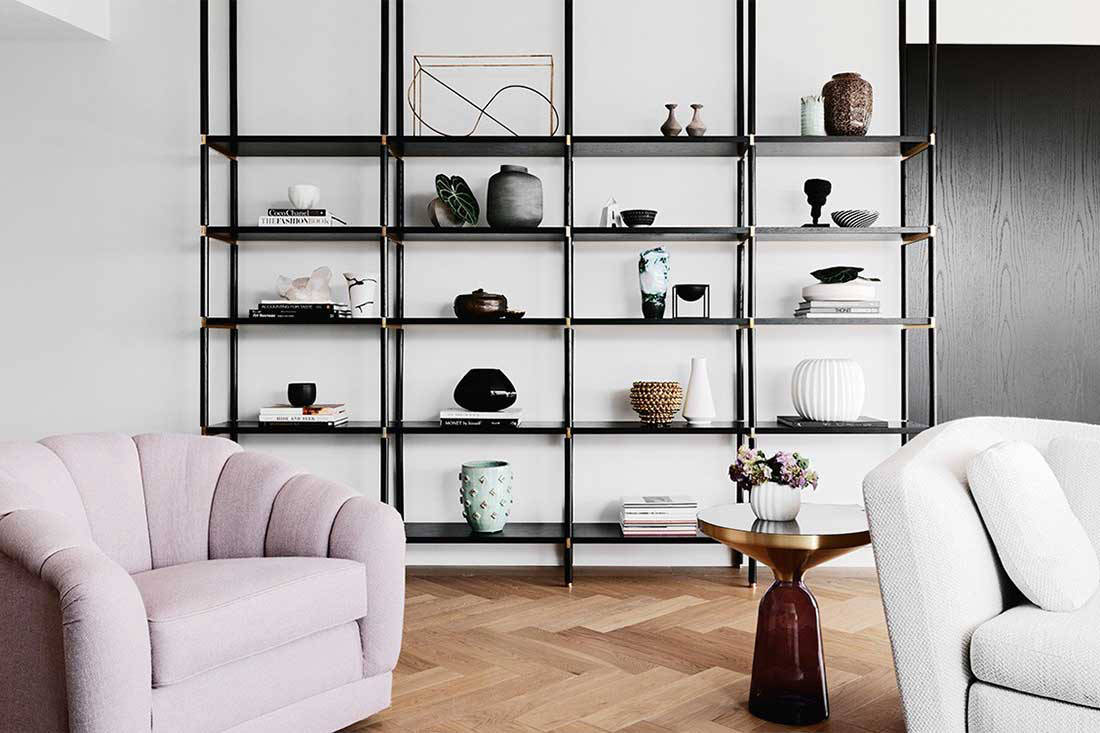 Further within, the kitchen nook continues this direction with a green marble Saarinen table, paired with a curved custom bench seat in navy linen and the angular lines of custom shelving. The dining setting likewise plays on curves with Hoffman chairs paired with the angular Atticus table. Texture and pattern afford a sense of play with the success of the powder room lying in the repetition of the chevron floor motif, in striking black and white marble.

Taking just under one year to complete, Arent&Pyke’s work on Darling Point Penthouse is a terrific reminder that the limitations of a space can be the key to its reinvention. The result of this clever and economic design for entertaining is certainly one of the most lauded and prolifically instagrammed residence’s of the last 6 months – and it’s not hard to see why.