Here’s why you would love these 8 Louis Poulsen lamps

Louis Poulsen consistently demonstrates the value of brand integrity with its range of iconic, distinctive lamps that’s carefully expanded from a strong foundation.

Ever wonder what makes classic designer brands so distinctive, renowned and special? They stand out from the brands that play to the increasingly rapid cycle of interior fashion, by charting their own course with a more meaningful exploration related to human experience.

These brands play the greatest influential role in shaping how we live, because it’s they who innovate with purposeful and creative integrity. They transcend fashion with timelessness and a much deeper relevance. Without question, one of these few significant companies is Louis Poulsen.

At the core of Louis Poulsen’s ongoing relevance is the brand DNA that was set all the way back in the 1920s. “Design to shape light” is a philosophy that has endured through the decades since it was established so memorably by Poul Henningsen with his ground breaking anti-glare PH lamp. In fact, the majority of the architects and designers Louis Poulsen has worked since with have been equally concerned with the atmosphere created by the lighting fixtures as with their functional qualities. Louis Poulsen works consistently with a human-focused lighting philosophy of function, comfort and atmosphere. Every product seeks a balanced duality between design and light.

This is a strong DNA whose integrity has been keenly preserved no matter the time or place in which Louis Poulsen’s designers work.

The brand DNA is translatable across time, place and culture precisely because it centres on the quality of human experience and the delight of meaningful design – not on trends that wax and wane with the seasons. Striking forms are sculpted to produce soft transitions between lightness and darkness – areas of light where it’s needed transitioning to pleasant shadows – and to ensure an enjoyable experience of form with good function.

How have Louis Poulsen’s diverse stable of designers interpreted and expressed the core of the brand? In diverse ways, but always in a manner that extends the brand story in the spirit with which it was born. Here we look at a handful of examples: #1 PH Lamp by Poul Henningsen (1920s)
The inventive and sculptural three-shade anti-glare system around which the Louis Poulsen brand has developed. An elegant blend of form and function where every detail has a purpose in shaping the experience of light. A series of curved shades (based on the logarithmic spiral) distribute light evenly over the inner surfaces of the lamp, and conceal the bulb from view. #2 VL38 by Vilhelm Lauritzen (late 1930s)
A sculptural but highly rationalised form that delivers a lighting experience to please the human senses. The hand-spun aluminium shade, shaped with curves sensitive to the human form, is painted white on the inside to ensure a softer and more comfortable glow. Its enduring appeal saw it recently re-released in a new black version. 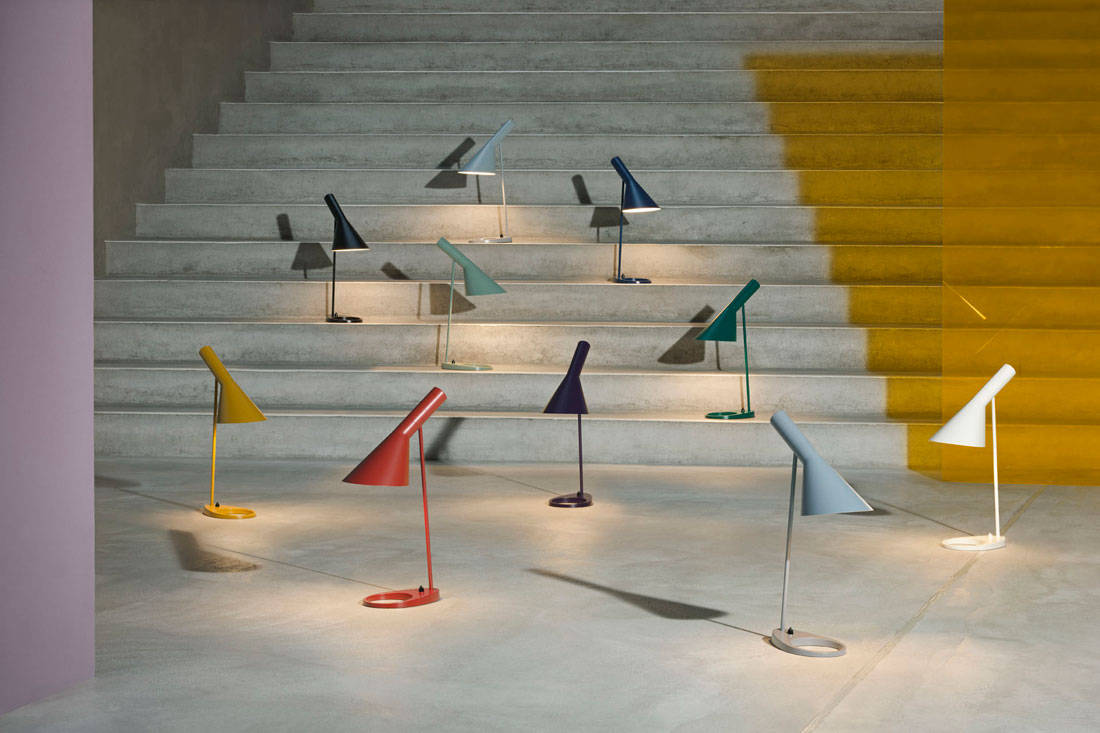 #3 AJ by Arne Jacobsen (1957)
Designed for the SAS Royal Hotel in Copenhagen, the AJ lamp has since become a world-famous design icon and one of Arne Jacobsen’s most popular lamps. The sculptural shade comprises two strong geometric shapes – the cylinder (socket) and the cone (shade) – brought together in a powerful play of angles. Light is concentrated where it’s needed. AJ was released in a spectrum of new colours last year. #4 PH Artichoke by Poul Henningsen (1958)
Diffuse light with zero glare. A strong modern design form, drawn from nature, which has retained its appeal since being designed in 1958 for the Langelinie Pavillonen restaurant in Copenhagen. A polished steel version was released in 2016 (adding to the available material options of copper, white-painted metal and brushed steel) after a lengthy process of testing to ensure the faithful provision of ‘the PH Artichoke experience’. #5 Panthella by Verner Panton (1971)
Recently released in a metal mini version (in a spectrum of colours identified by Panton), Panthella exemplifies Verner Panton’s interest in the rounded shapes that would become known as ‘organic design’. The opal acrylic shade creates a soft, comfortable illumination, and while light is directed downwards, the material ensures a soft diffuse light in the room. The iconic half sphere shade is balanced by a bold trumpet-like foot. #6 Collage by Louise Campbell (2005)
Light is directed downwards and glare is prevented by the staggered overlaying of three layers of laser-cut acrylic. The patterns differ between the shades, resulting in different perceptipons of light and shadow depending on the viewing angle. Nature (specifically the filtering of light in a forest) is expressed in a playful mode intrinsic to Campbell, but the design also creates the kind of atmosphere crucial to the Louis Poulsen experience. #7 Patera by Øivind Slaatto (2015)
Like PH, Patera was inspired by the mathematics of nature – in this case the Fibonacci sequence. Patera has a striking form that intriguingly balances symmetry and asymmetry. Diamond-shaped cells (created by the interlocking of matte PVC strips) capture light and direct it softly upwards and downwards. #8 NJP Lamp by Nendo (2015-2016)
Oki Sato, founder of nendo design studio, designed NJP with the intent of producing a new interpretation of the classic anglepoise lamp, with functions adapted to modern working life (both in the office and at home). The LED lamp can emit two light intensities: one for directed work lighting and one for dimmed, ambient lighting in the lounge or the bedroom – or for switching between reading hard copy text and digital documents.