Ethereall creates a warm and welcoming sanctuary for a couple who loves yoga and cooking.

The hectic pace of modern life shuts off when one enters this old HDB walk-up in Tiong Bahru. Time seems to run at a different – slower – beat. It was the appeal of such a life that drew one young couple to this unit on Lim Liak Street.

“The owners are homebodies. They love yoga and cooking, and were looking for a place where they could chill,” says the designer from Ethereall. 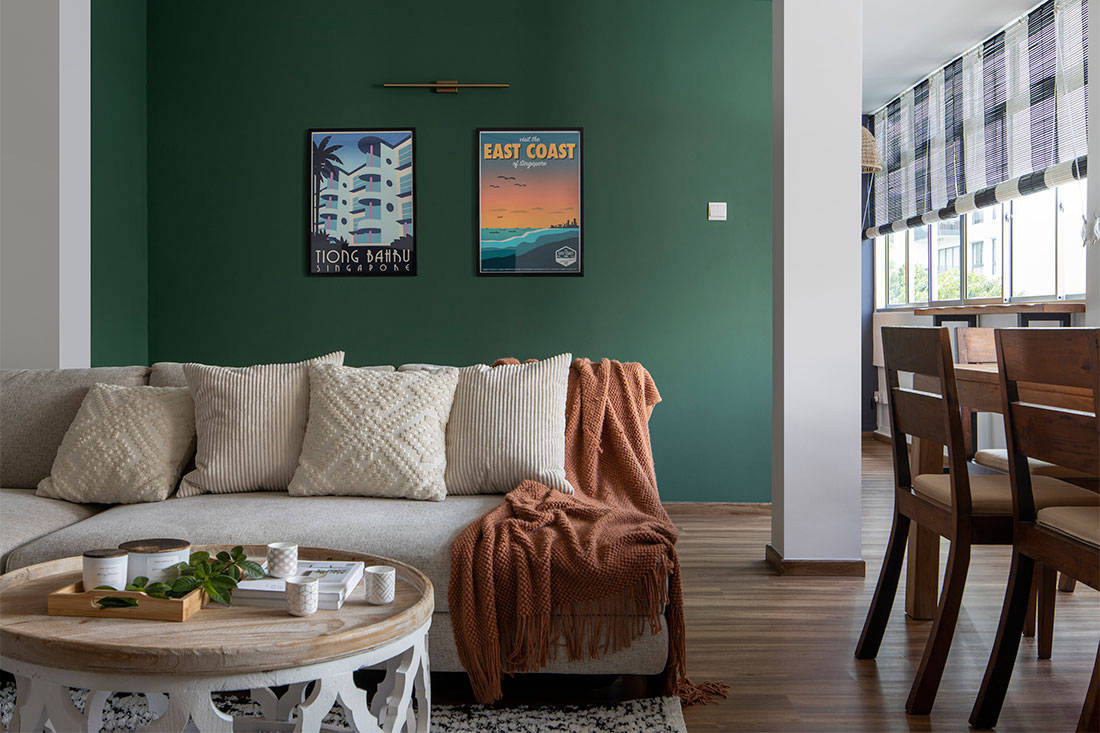 The clients’ brief called for a space that was sensitive to the context of the location. “They wanted their home to have a vintage feel to suit the estate. It had to have colonial elements, but also pops of colour for a livelier interior,” the designer says, adding that the couple was also keen for the space to have a boutique hotel vibe, and to look and feel bigger since they would be spending lots of time at home.

Warm colours such as dark wood, olive green and terracotta have been applied to achieve a homey and comforting atmosphere in this HDB walk-up. Instead of fixed carpentry, loose furniture in the living area aim to give flexibility for the couple as their lives evolve. 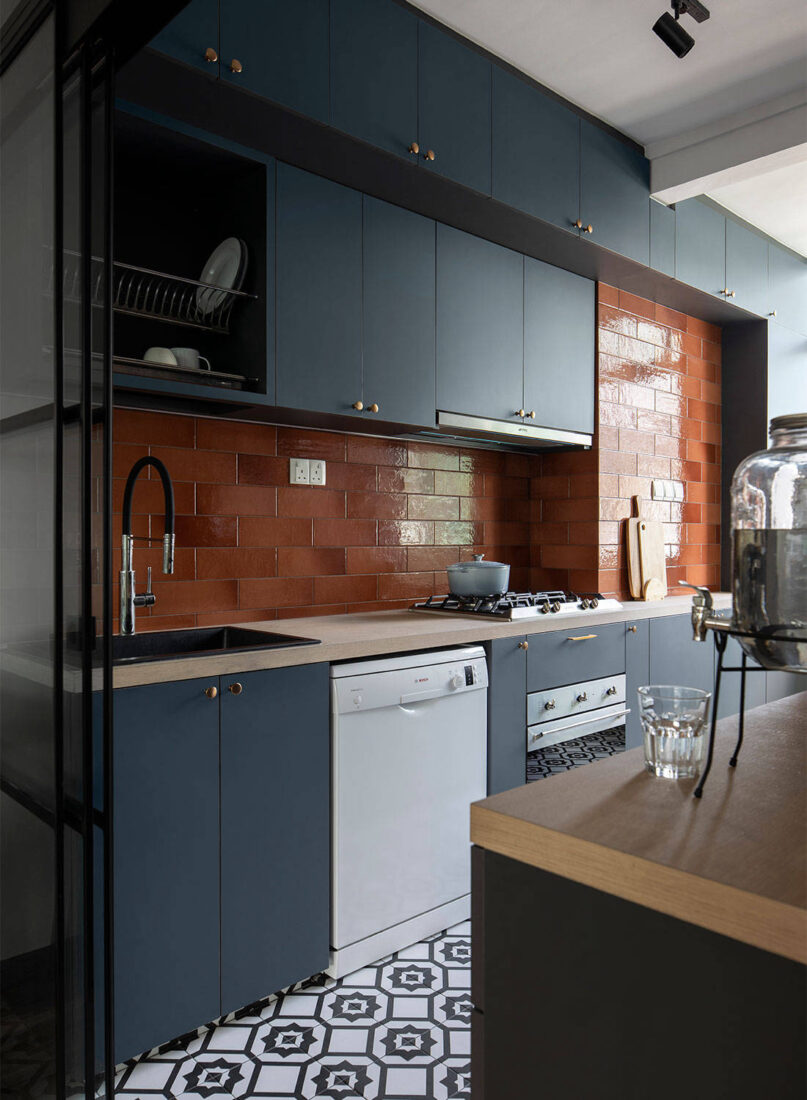 The original arched entryway into the kitchen was replaced with full-height sliding glass doors to bring more natural light into the house. Despite a modest kitchen space, the designer was able to squeeze in a dry pantry with shelving above to give the couple more counter space for cooking. Dark coloured cabinetry were also specifically chosen to bring out the tiled terracotta backsplash and patterned floor tiles. 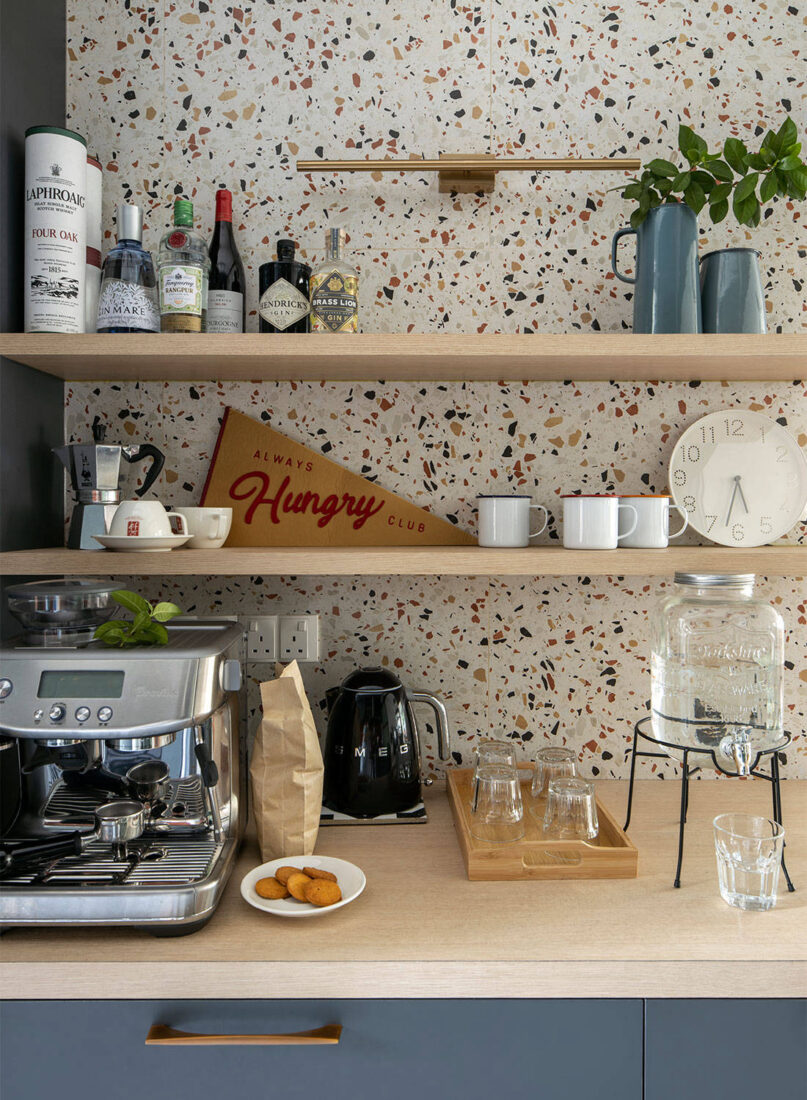 Given that the walk-up is more than 60 years old, the spaces have been rearranged to be more attuned to modern day living and conducive to the couple’s needs. 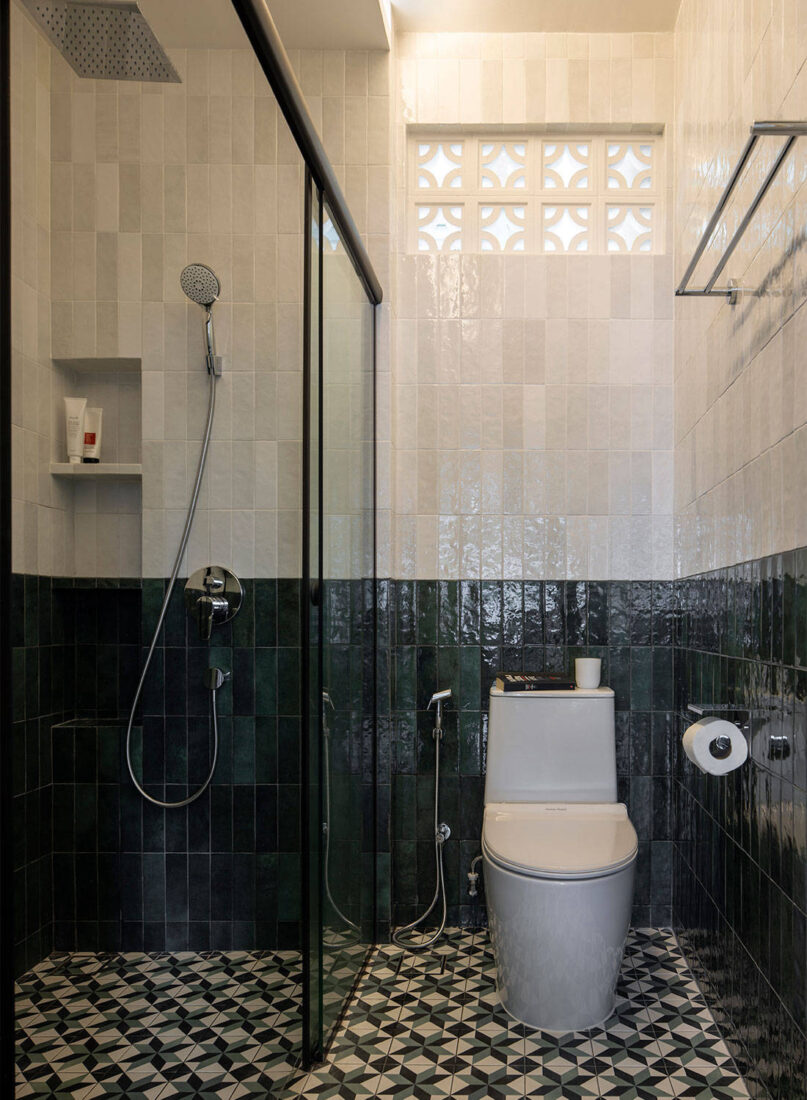 As is typical of an old HDB walk-up, the unit had separate WC and shower areas. But they have now been combined. “We also inserted two doors so it can be accessed from both the living area and master bedroom,” the designer adds.

Various elements bring in the vintage. These include ventilation blocks that retain the ‘age’ of the house, as the designer describes, and black and white outdoor roller blinds for a colonial touch. Interestingly, the designer managed to keep and restore the old bedroom doors and reuse them for the master bedroom and study. Even the original locks were kept. 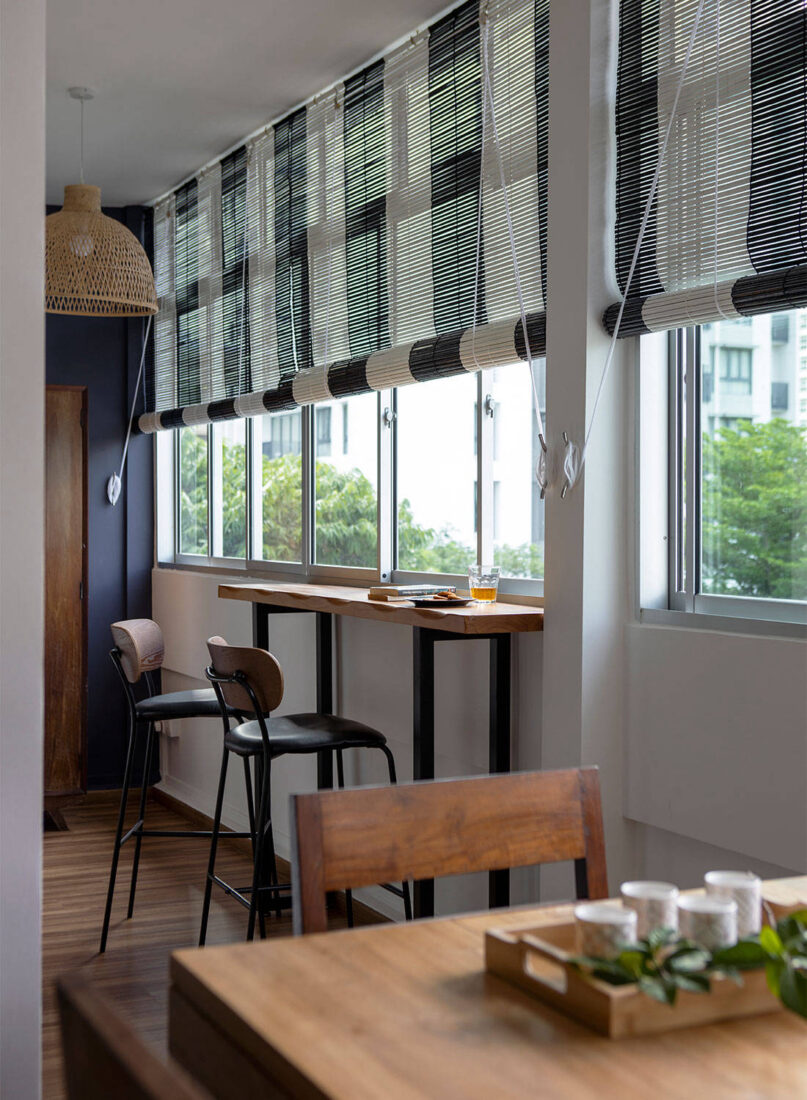 The bedroom is where hints of luxury boutique hotel living come into play. But to start with, a few odd structural elements had to first be evened out.

“Due to the combination of the balcony and master bedroom, there was now a beam in the ceiling separating the two areas. So we built a false ceiling above the bed to cover it up,” says the designer. “The wall in front of the bed was also uneven so we boxed it up and created an arch feature.” 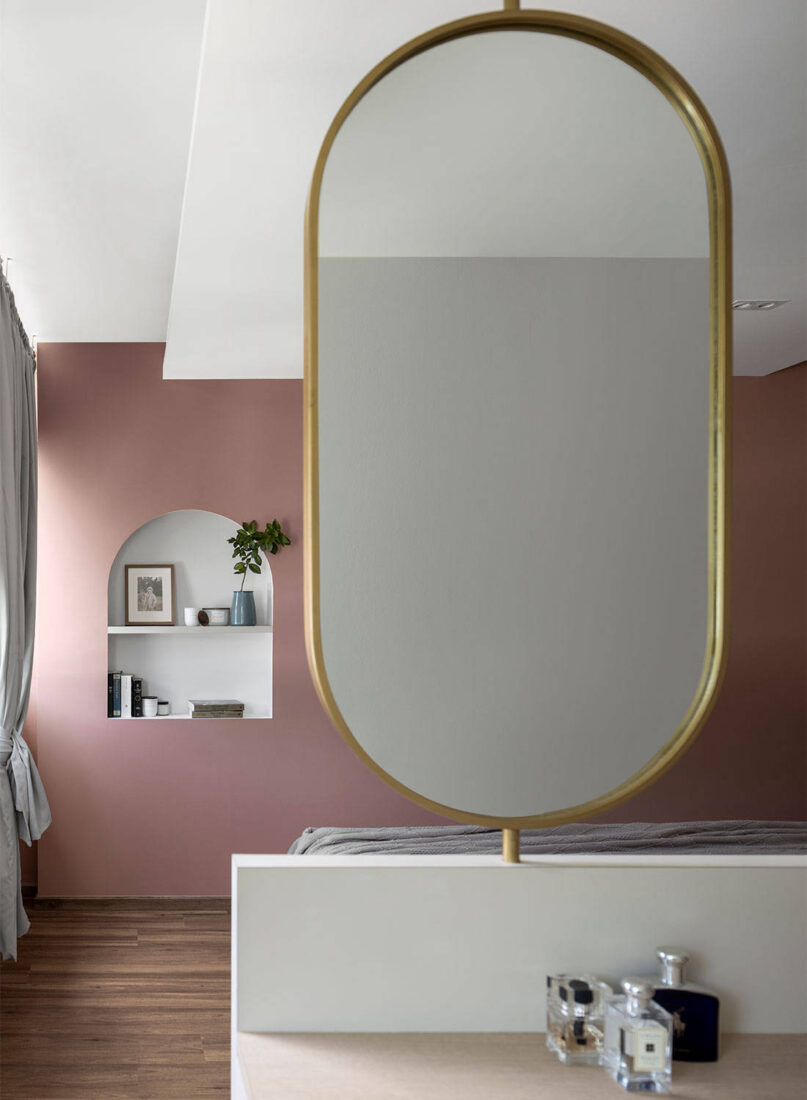 A chest of drawers, which also serves as the bedhead, is inspired by boutique hotel room designs. The designer says that such an arrangement effectively “acts as a separator between the bathroom/dressing area and the sleeping area”. A gold-framed mirror supported by a pole mounted from the ceiling brings in a touch of luxe. 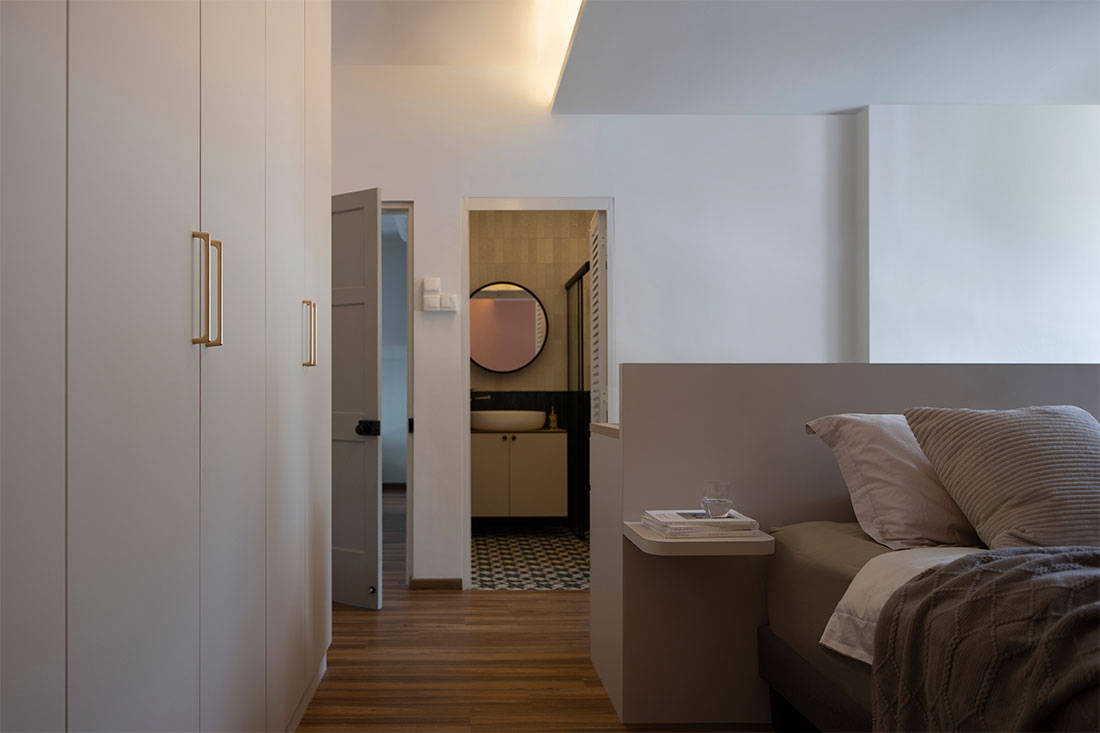 The departure from warmer tones in the public areas to one that’s soft with injections of pink, is the final touch that brings the comfort of hotel living (as requested from the start), into this calming sanctuary.