The split-levels of this row house in Vietnam have been purpose designed by Khôun Studio to encourage connection and natural ventilation throughout.

Ho Chi Minh City is known for its tropical climate and sunny disposition. In fact on average each month of the year gets over 100 hours of sunlight – approximately 150 hours for six months of the year – and the average daily temperate sits at a warm 28 degrees Celsius. A densely populated city in which the humidity hovers between 60-80 per cent, it’s no wonder air conditioning is almost as common as windows and doors in an architect’s brief. 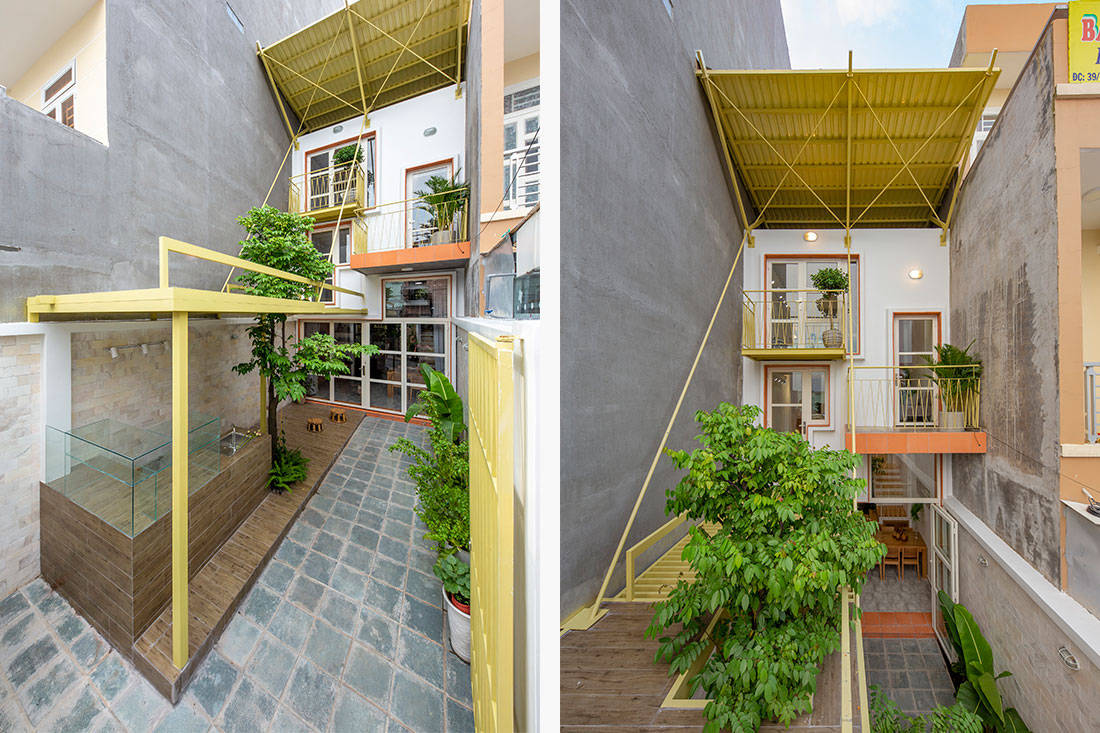 But this wasn’t the case for Khuôn Studio in the brief they received for Double Roof House, in fact, it was precisely the opposite: no air conditioning. That might have been their most direct instruction because as architect Tuan Huynh Anh recalls, the brief was limited: “They trusted us and gave us full discretion of designing the form of the house.” 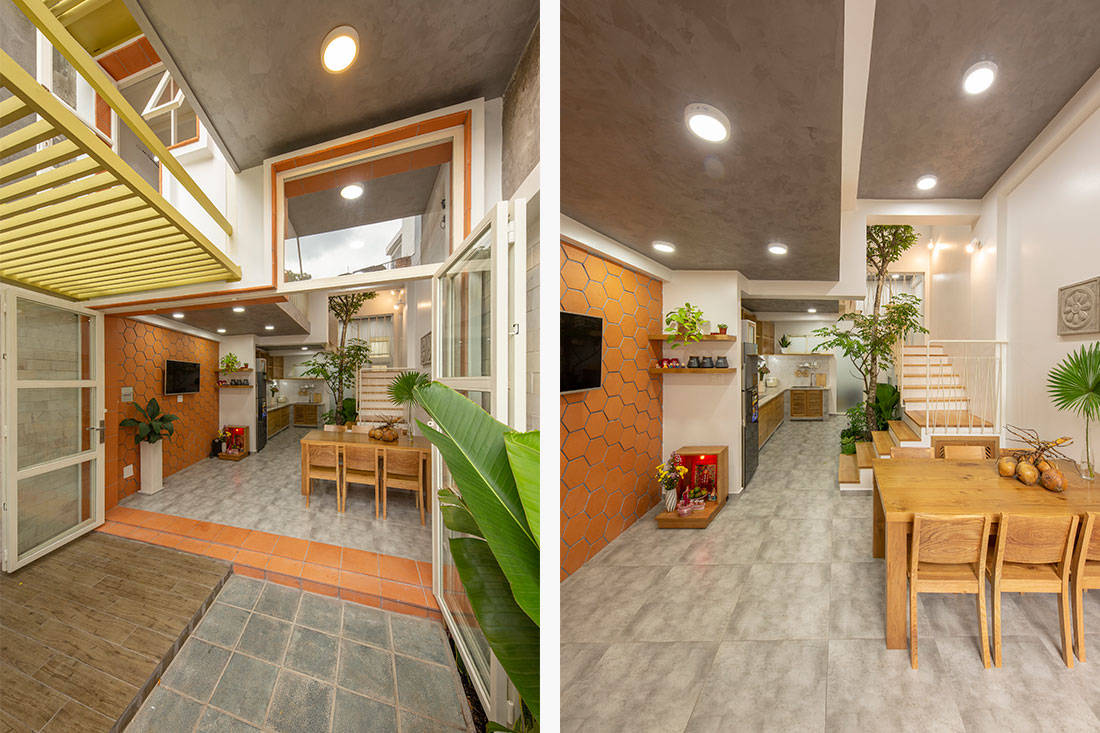 The client is a couple with one son, a grandmother who visits frequently, and a small family food business. It was essential that Khuôn Studio considered each element in the design of the house. 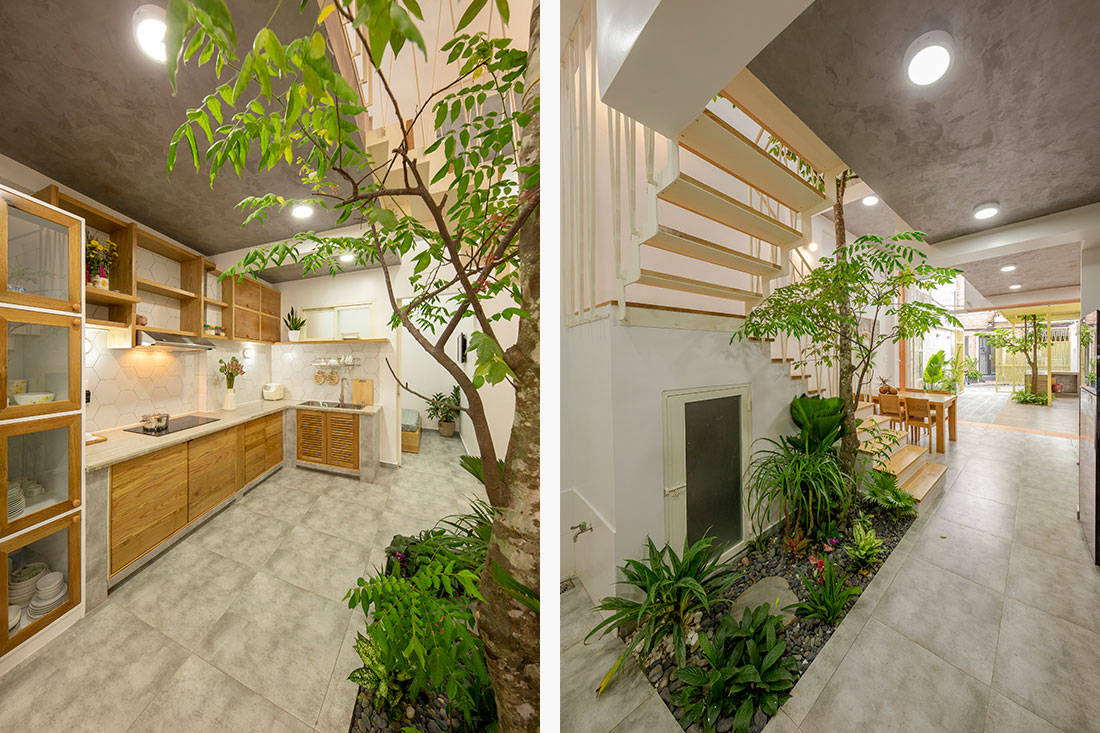 Behind bright yellow, semi-translucent front gates is an open courtyard and inbuilt food counter and sink structure to cater to the needs of the family business. The front courtyard flows indoors behind glass bi-fold doors to the living area that can be used as additional business space as needed. Behind the living area are the kitchen and a ground floor guest bedroom for the client’s elderly mother. 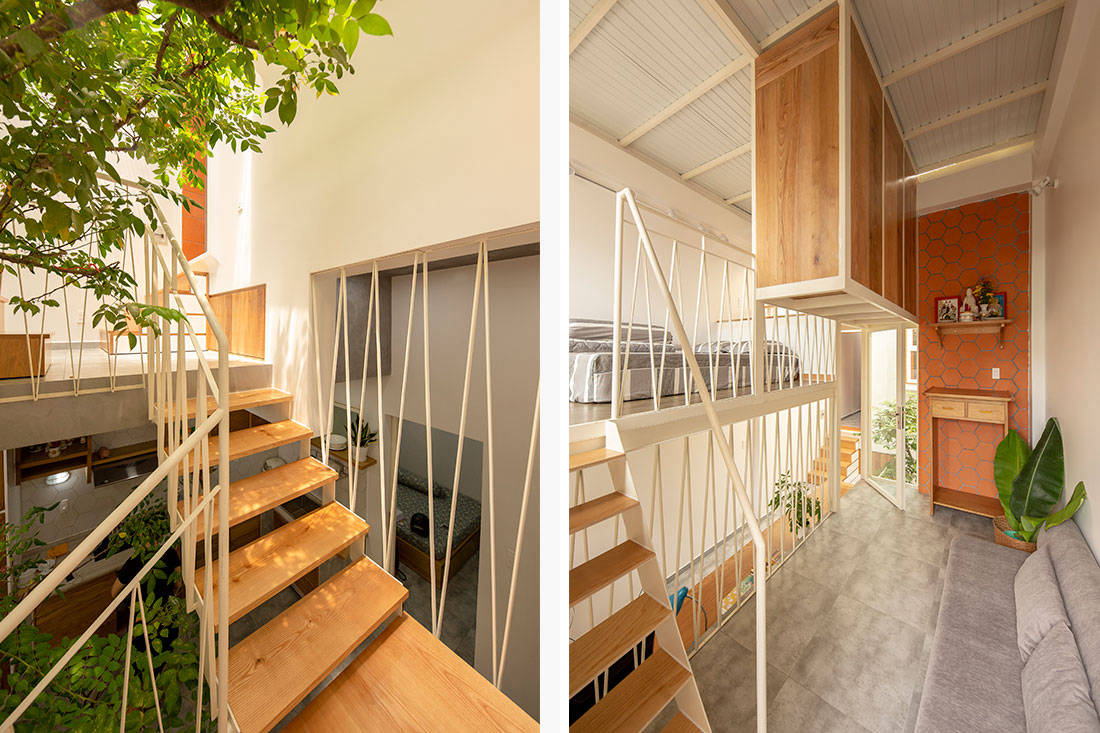 An open staircase revolves around an internal tree under a large skylight. From here the plan becomes split-level, connecting the spaces visually and encouraging ventilation. On either side of the first floor landing a few steps lead either to the main bedroom or an entertainment room with more steps leading up to the son’s bedroom. On the landing out past the study is an external terrace. 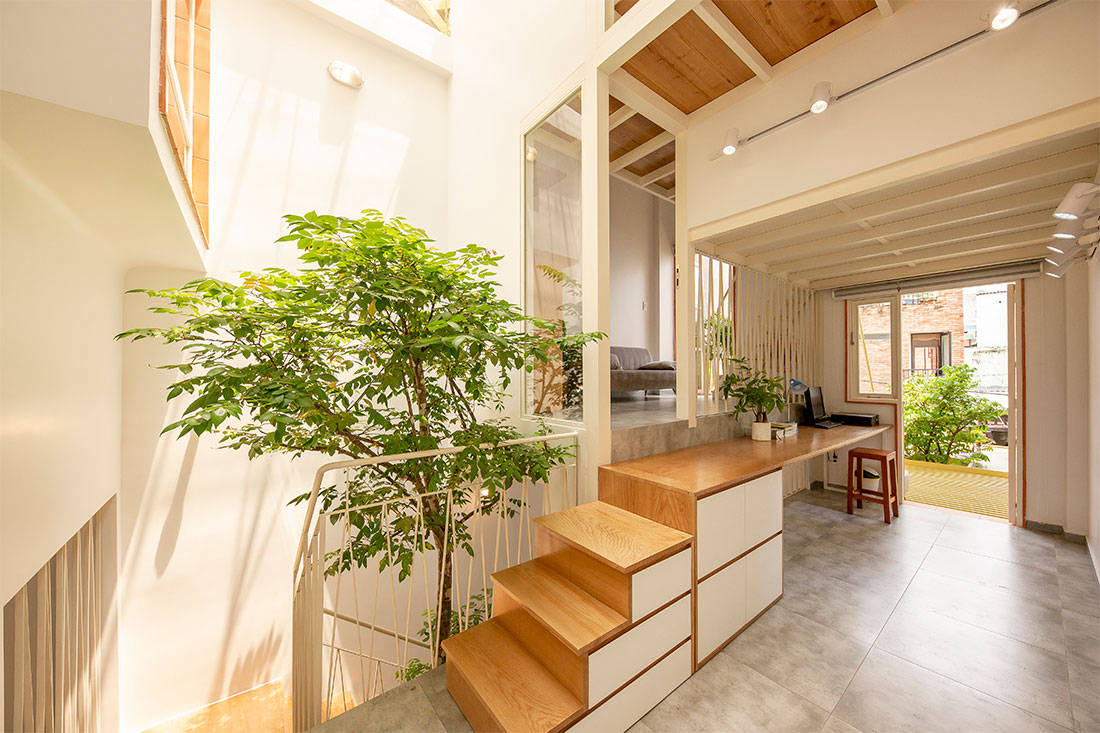 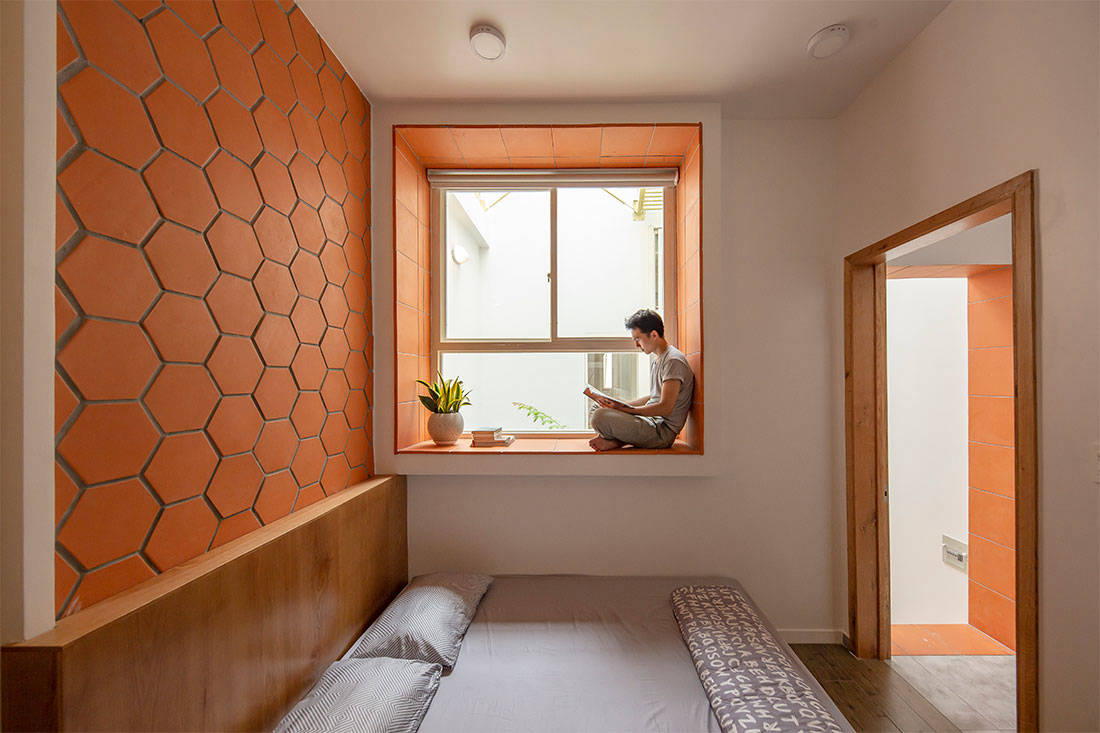 Given the location between two tall houses, it was a challenge for Khuôn Studio to ensure they met the client’s request for natural light and ventilation. In response they came up with the idea for a double roof system, which worked so well in the end it named the project. “The buffer gap between the two corrugated roofing panels reduces the heat flux into the house,” says Tuan. 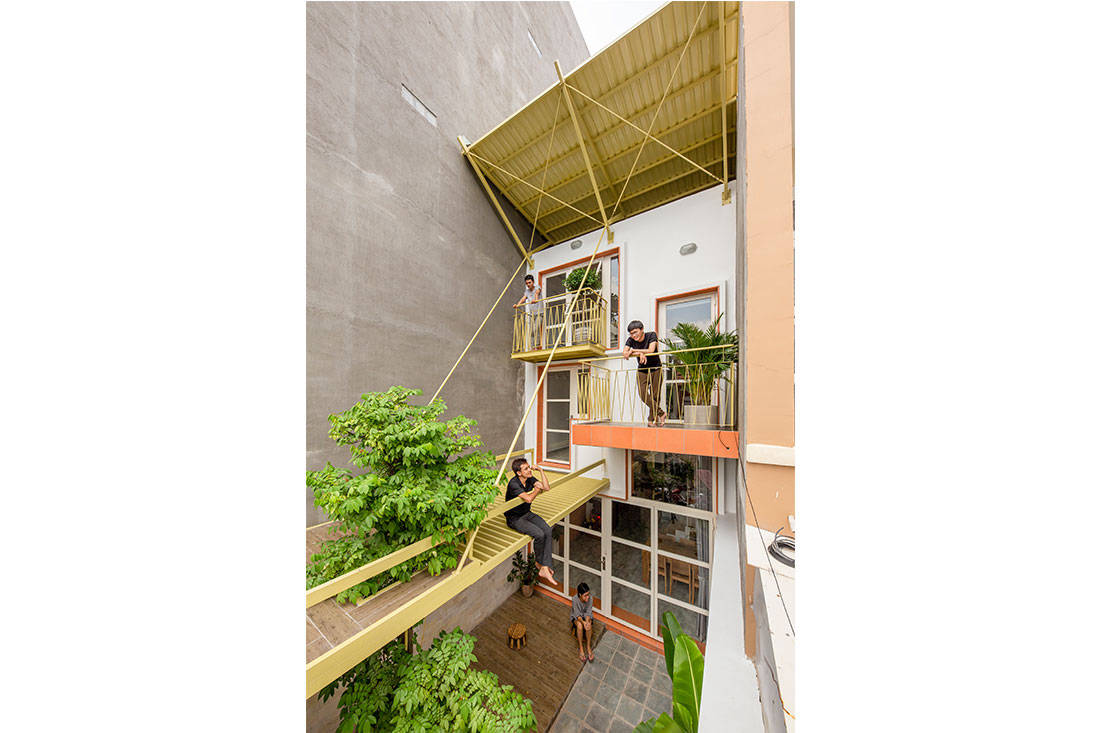 Not only is this a more pleasant way for the client to live, it reduces energy use and costs, benefitting the client financially and reducing the carbon footprint of this house with split levels. 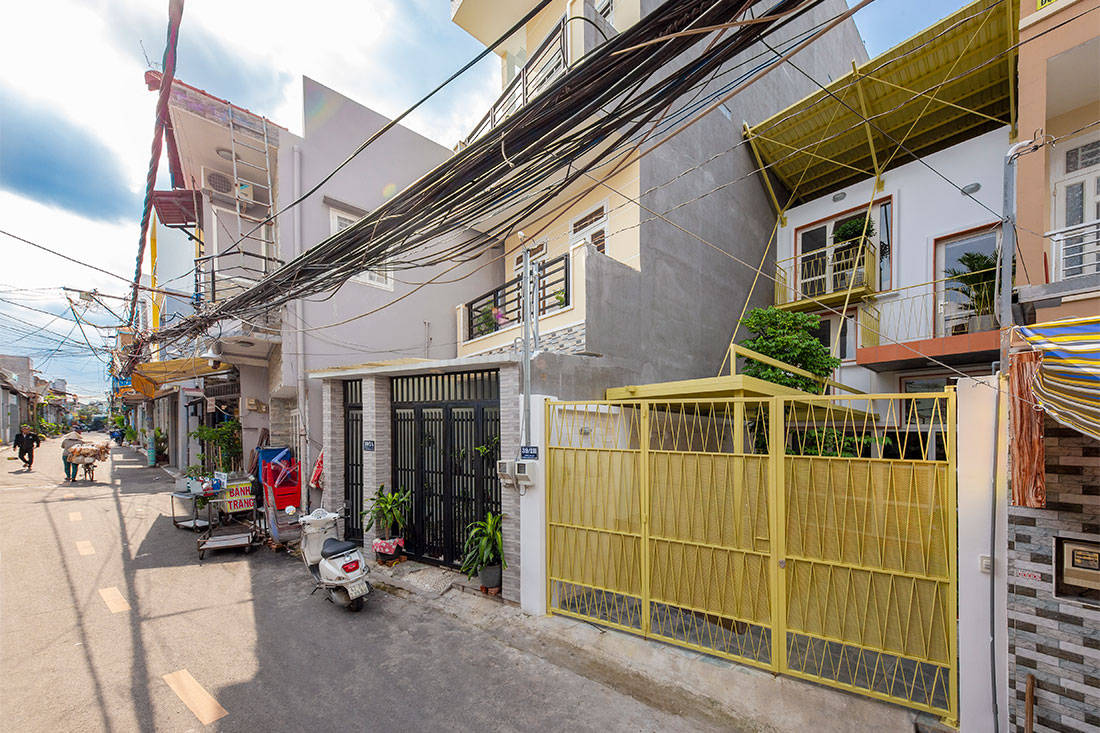