What you can see at this year’s Architours 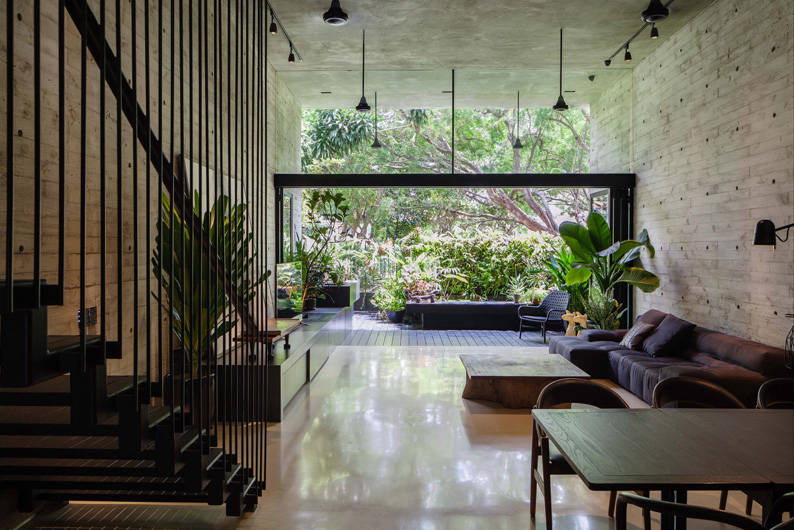 Archifest, an annual architecture festival in Singapore, is back for its 10th year! And it brings with it the highly popular Architours, a series of ticketed guided tours that brings participants to various sites to explore and learn about local design and architecture.

Each guided tour consists of a curated mix of three or more different sites such as residential houses, public institutions, landscape projects, or religious buildings. With more than eight tours for you to choose from, there is certainly a wide variety of spaces and buildings to see! We bring you a sneak peek into 12 of these sites. The courtyard screen fronting the street rethinks the conventional entrance of residential dwellings. Timber craftsmanship created a refined and rhythmic facade, drawing attention to its modern aesthetic and detailing even as a structure over eight metres high. An innovative social initiative created by Montfort Care to support ageing-in-place, Goodlife! Makan is a recreational facility located at the void deck of HDB flats in Marine Parade, with a communal kitchen at its nucleus. The design is a shift away from conventional gated elderly activity centre models, resulting in a communal space that is integrated with the surrounding streets and walkways. The classical proportions and rhythms of the roof and majestic diagonals on its exterior create a visual spectacle of ‘animated’ waves projected on the walls when light passes through the terminal. The Marina Bay Cruise Centre is one of the major developments in the reclaimed Marina South area as part of Singapore’s Downtown Master Plan. Designed to fit into a tight bungalow plot, this residential project stands out for its austere simplicity and timelessness.The main materials are off-form concrete, tropical hardwood, and bamboo. The combination of raw concrete and bamboo forms long dramatic architectural lines while also serving as security, privacy and sunshade. A 14-metre cliff-like wall slopes downwards from the rear, rendering one-third of the site unbuildable. To create personalised living spaces for a family of three generations and a lush garden, the house is designed to cantilever over the retaining wall while the uneven terraces of the wall have been transformed into a sloped garden. This is the first time that purpose-built museum spaces have been commissioned for the Asian Civilisations Museum. The two new extensions, befitting aspirations for open unobstructed gallery space, seamless spatial flow, and daylighting, take on different characters throughout the day as the surfaces reflect the changing day lit ambience. Hexagonal pods create clusters of kennels, forming the three main animal enclosures in the SPCA – Holding Area, Quarantine Area and Adoption Centre. The prefabricated ventilation block wall is designed to let in light and ventilation but not the rain, housing the animals and staff in a protected environment while maintaining the sense of connection to the surrounding natural landscape. Comprising 11 inter- terraces and 16 corner terraces, this cluster terrace housing project achieved a large proportion of corner terraces by grouping the housing units into sets of three or four. This arrangement allows for better views and increased daylighting into the units. The National Gallery Singapore transforms two of the country’s most significant monuments, the former Supreme Court and City Hall, into Southeast Asia’s largest visual arts institution. A new roofing structure and a basement concourse unite the monuments from above and below, leaving the original structures intact while creating much visual interest and functionality. A series of different strata of offices, hotel and club rooms each comes with its own sky garden. These additional “ground” levels allow generous public areas for recreation and social interaction throughout the high-rise building. Located in the heart of Singapore’s dense Central Business District (CBD), Oasia Hotel Downtown is a prototype of land use intensification for the urban tropics.

This multi-generation home gets full exposure to the western sun and embraces constant natural ventilation in order to deal with the heat issue. While the ground floor is a lush timber clad sanctuary, the upper level totally opens to the external through a carefully calibrated metal and timber screen. The long vista towards the distant ridges, a last bastion of un-spoilt greenery in Singapore, and the mature trees around became the point of deliberation for the design concept of the visitor centre at HortPark. The architecture is crafted to be a series of columns, like a grove of trees, all painted black to contrast and interact with the landscape.

Join Architours 2016 for an exclusive look into not only the spaces, communities, and buildings – but also for an insight into the architectural strategies that govern and inform their design. Tickets are available at www.archifest.sg/2016/architours.