Outdoor lighting that you would want to use indoors

After redefining the beauty and effectiveness of bollard lighting with Flindt Bollard, Christian Flindt has renewed indoor and outdoor wall lighting with the softly illuminating Flindt Wall.

If there’s one thing that Danish designer Christian Flindt has proven with his inspirational work for Louis Poulsen, it’s that outdoor lighting can embody the same elegant and sculptural light quality as its indoor counterpart. 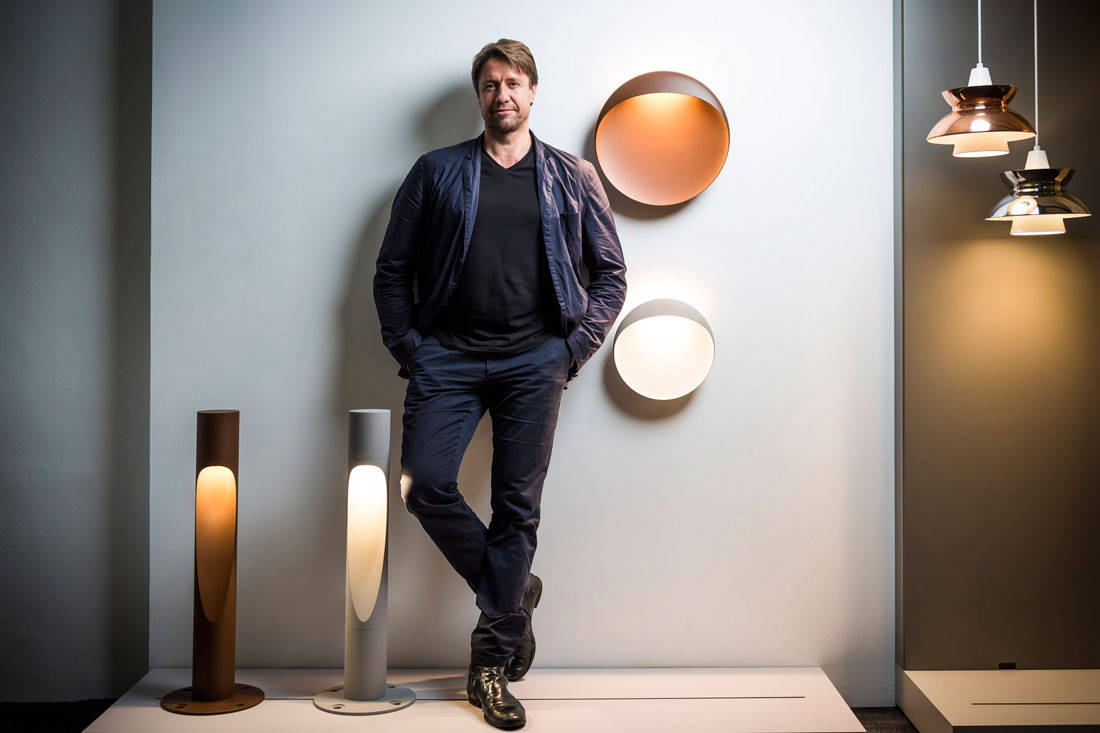 His popular Flindt Bollard set a new direction for outdoor lighting – literally and figuratively – with its organically shaped asymmetrical illumination proving as alluring as the expressive carved fixture from which it is cast.

Now, with the recently released Flindt Wall, he has defined a new mode of warm, inviting light with a sculptural carved-out fitting that balances robustness with mesmerising delicacy for use indoors and out.

Flindt Wall – The Glow Of The Moon

Flindt Wall sends a gentle glow in multiple directions from its sculpted circular form, washing both the wall behind it and its own inner surface, while highlighting the shape of a half moon. A subtle glowing ring of light is reflected from the fixture’s rim. 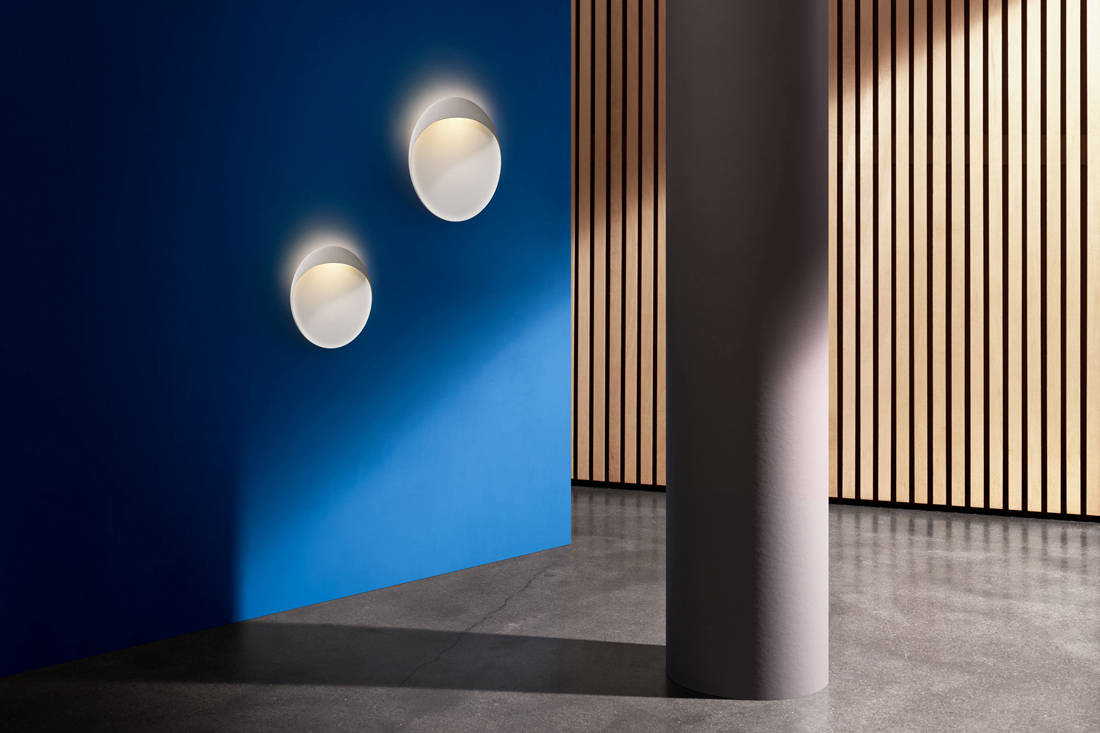 True to the DNA of Louis Poulsen, the overall effect is entirely glare free. Rather, the matte grained powder lacquering of the aluminium body renders a soft gradient of light from the top to the bottom of the fixture.

During the daylight hours, when it is turned off, Flindt Wall is equally expressive. Its gently curving form notes the passing hours like a sundial with its integrated shadow. 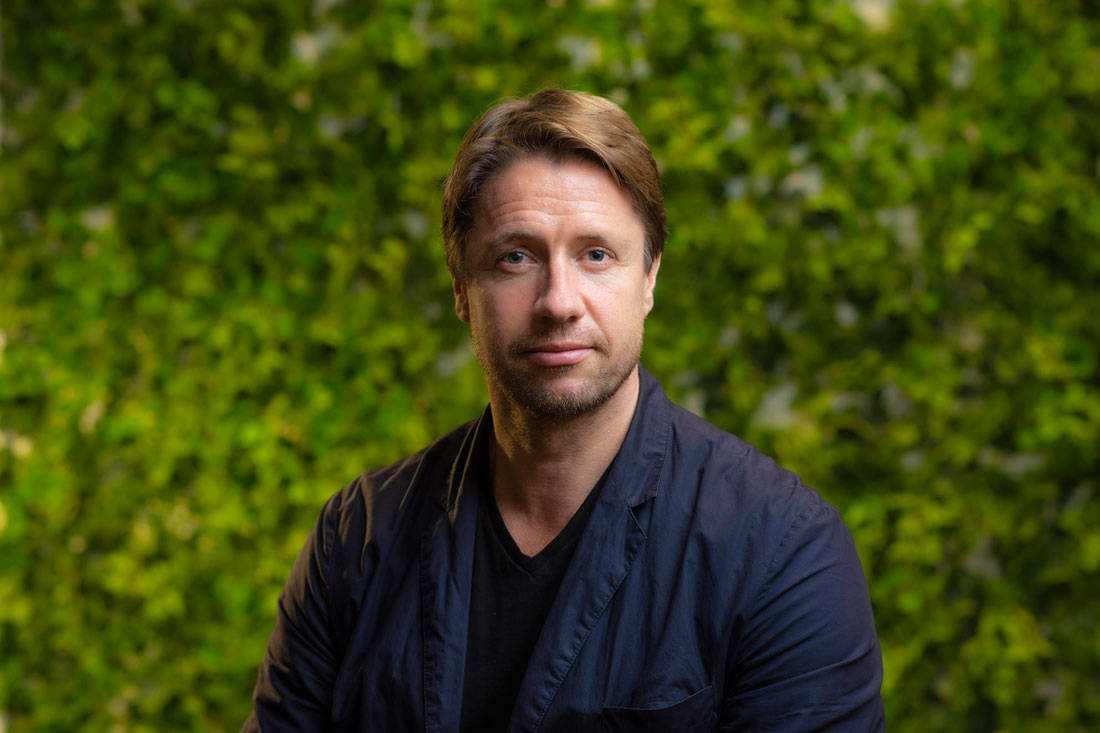 Flindt visited Singapore last month to share his inspirations and the deep thought that informs his work with an inspiring lecture at The Projector cinema. We chatted with him prior to ask more about the incredibly poetic Flindt Wall, which is available in three colours: Alu Grey, White and Corten. 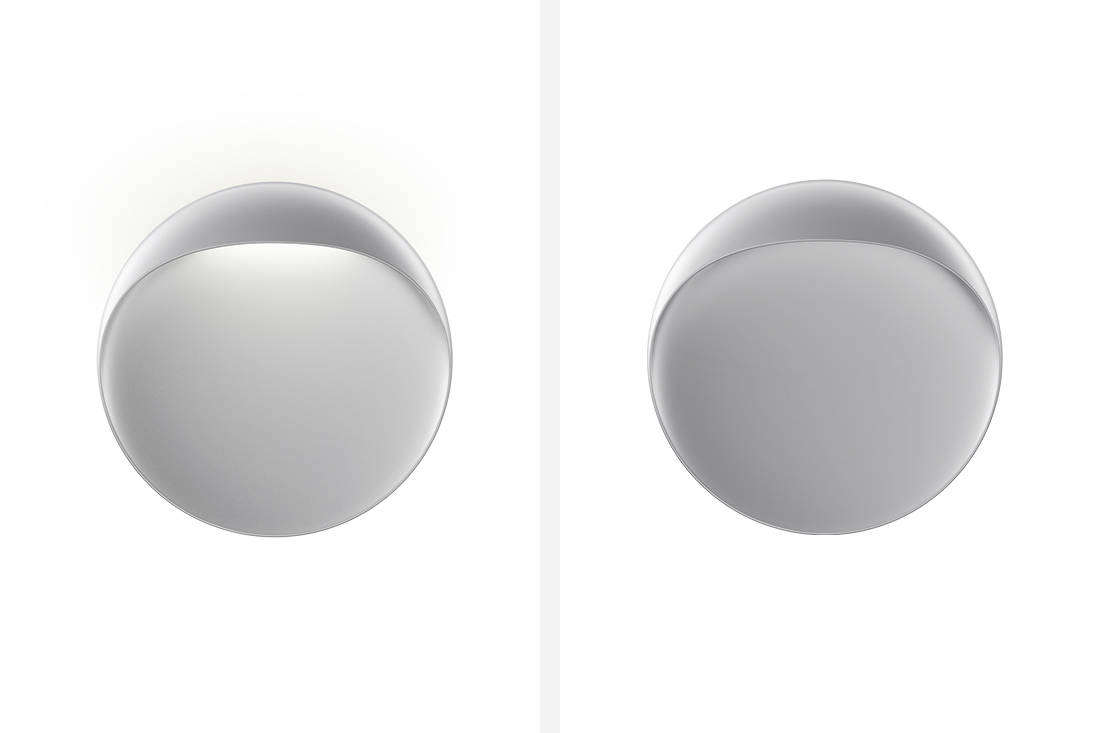 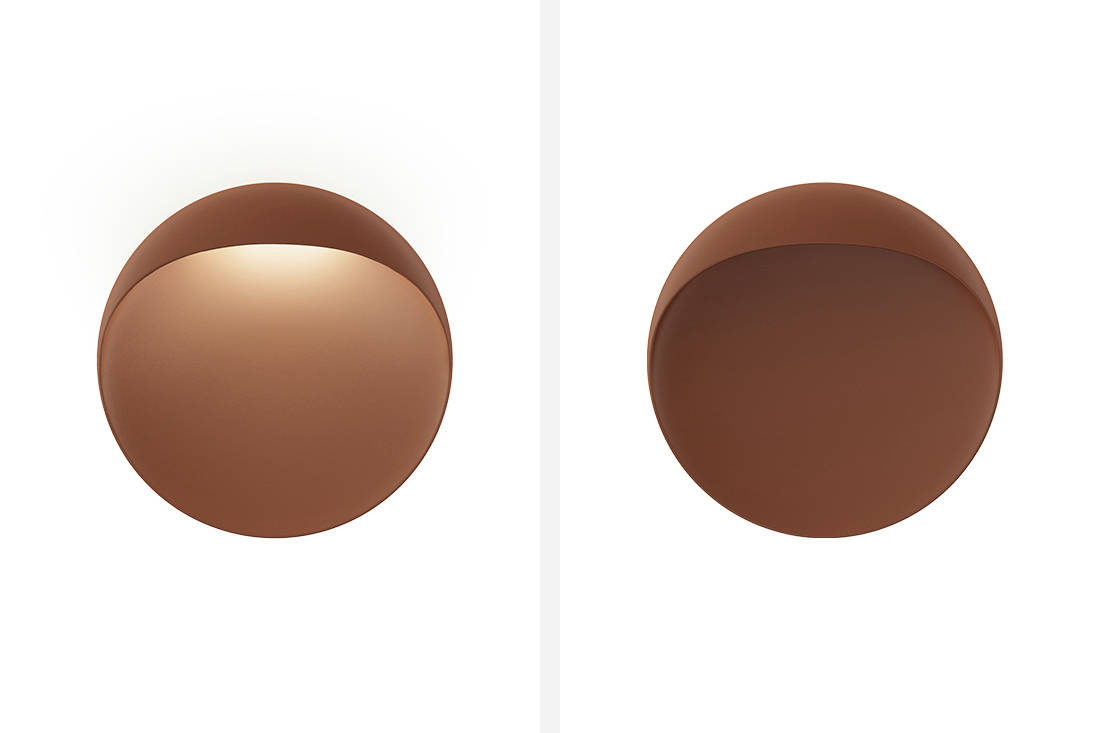 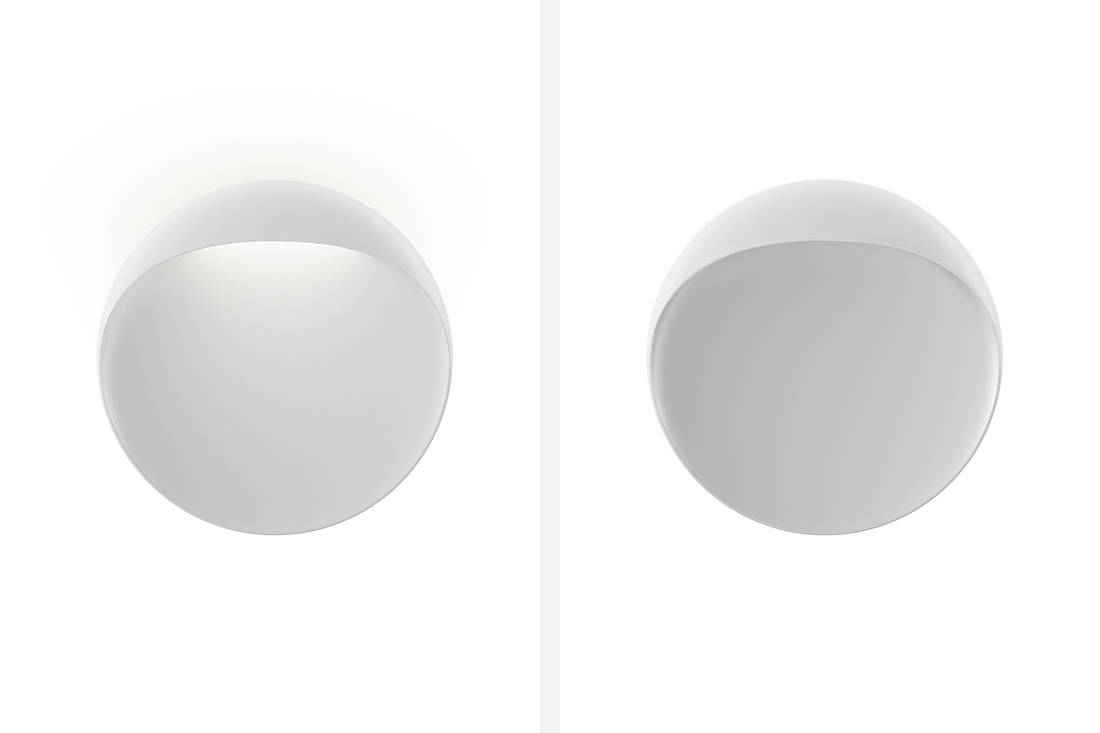 Was there a gap in the market that you and Louis Poulsen were trying to fill with Flindt Bollard and Flindt Wall?
Yes there was. When I started working on Flindt Bollard, I was having a big solo exhibition near my hometown. The director of the museum told me the local landscape architects and municipality had difficulty finding light bollards. They thought they all looked the same and had the same problematic light distribution, where a pyramid at the top would simply reflect light down to a bright spot surrounded by darkness. Only half the light would hit the footpath.

At that time, Louis Poulsen only had symmetrical light bollards. I asked them if they’d like to collaborate with me; I was willing to spend a lot of time to focus on an asymmetrical light with LED. They had not been doing LED products at all. Both Louis Poulsen and I saw it as an opportunity to do some research, and we put together a funding application with ELFORSK – the Danish Energy Research and Development Program. We received funding and in the end we developed Flindt Bollard. It has become Louis Poulsen’s best-selling bollard.

How soon after that did you develop Flindt Wall?
Flindt Wall has arrived some five years later as a result of demand from the market for a family of products. People said, “It would be nice to have families so we can make a total feel when we do our outdoor projects.” In the beginning, Flindt Wall was more like the bollard – very directional. In the end, we found that it would be better to have it more multi-directional so it can be used in more places. The round shape followed naturally. 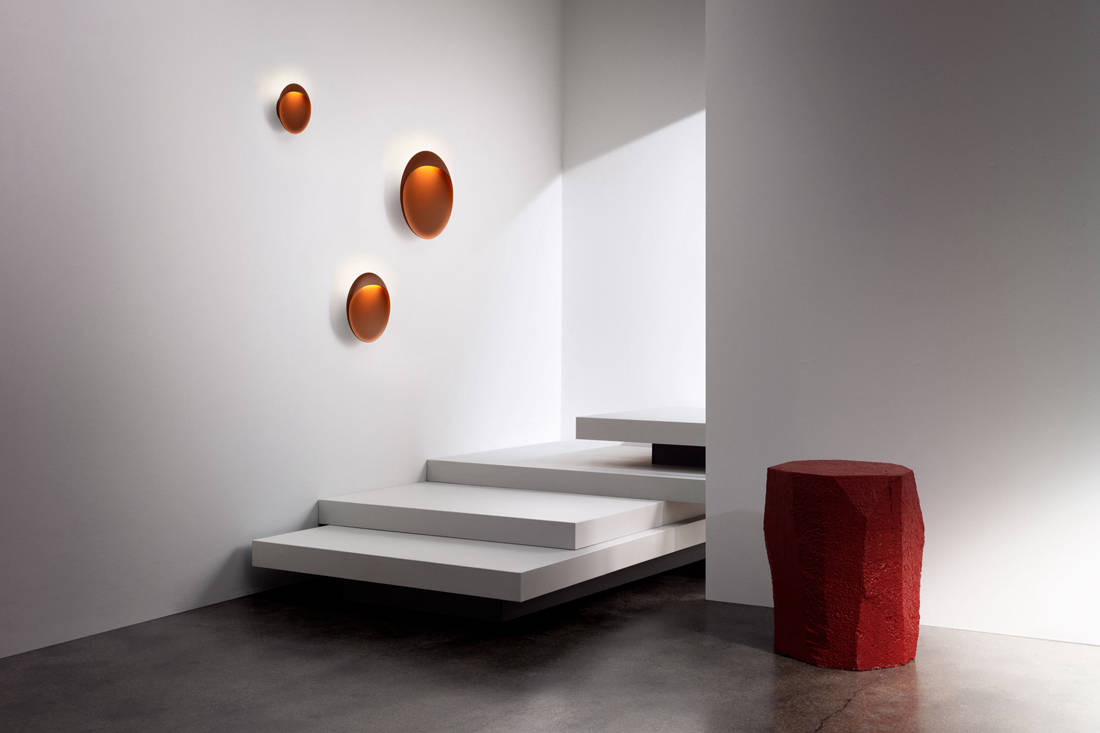 So far, is Flindt Wall being purchased most for outdoor or indoor use or both?
Both. I think it’s the first product Louis Poulsen has had that covers the contract market for both indoor and outdoor, as well as residential. Flindt Wall is watertight. Of course, you could say that it’s overkill for indoor use, but we found out during prototyping that it didn’t make sense to have two sets of tooling.

It’s made in aluminium in just two pieces using this special tooling that allows us to avoid having any partition lines. That means there are no gaps, and no light filtering out where we don’t want it to. It also means Flindt Wall is very difficult to copy.

The prototyping process must have been challenging.
Yes it was the first time that I worked with 3D printers in my studio. It brought the dialogue with the engineers to a more even level. It was not me just coming with renderings of the outer surface or cardboard models like it was with Flindt Bollard. I also did some casting with a bronze caster from my hometown. Then I could grind and experiment with the surfaces. So it was a big learning process for me, and I think it was nice for Louis Poulsen’s engineers that I had gone through this development. 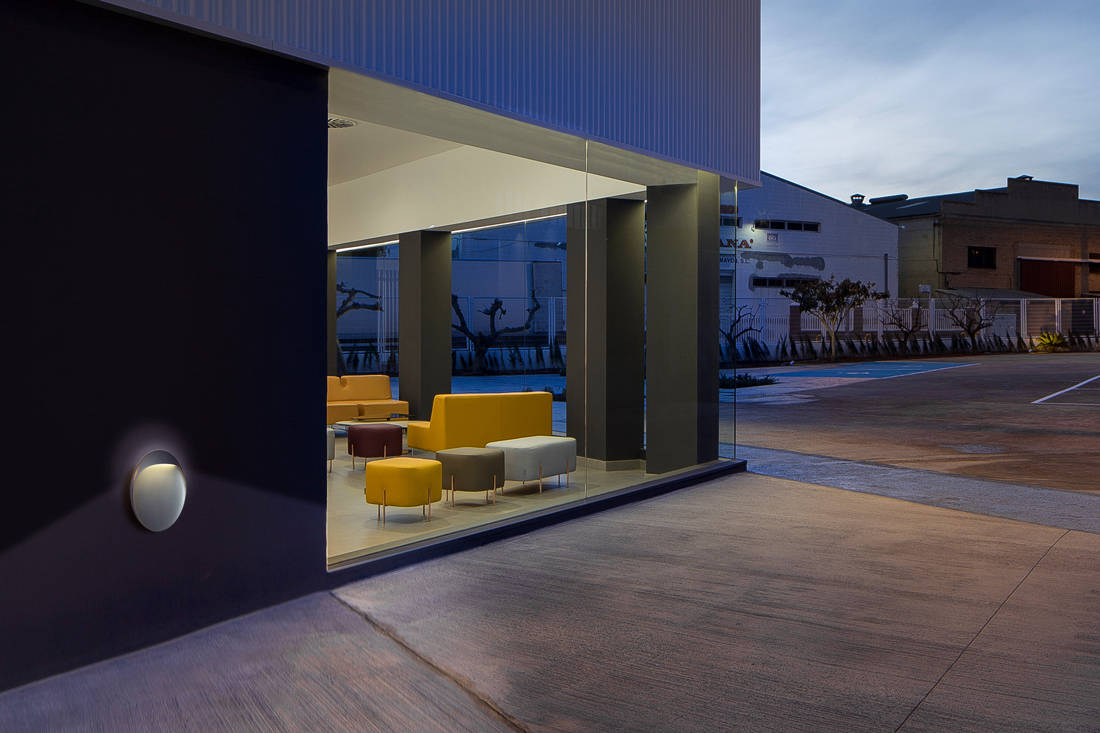 The moon-like character of Flindt Wall is particularly alluring. What is the value of this sort of engagement?
When we took Flindt Wall to the Light + Building fair in Frankfurt, it was nice to see that people were really attracted by these wall pieces. They immediately walked up to them, looked from different angles and touched them. When you have that response from people, I think it means you have done something that touches them. Flindt Wall is offered in three colours, and each of them has a very different visual effect. Even though the shape is quite flat, there’s a strong 3D effect.

In your view, what gives an object timelessness?
Using the right materials is definitely one aspect. We used aluminium for Flindt Wall and made the construction as simple as possible – just two simple parts. The tooling was complicated, but the imprint is simple and you only need a few screws to assemble it. That’s very important for municipalities when they select streetlights; they need to be able to change light sources in an easy way. Also, when a project becomes outdated – hopefully in 100 years and not too early – then it will be easy to take the aluminium parts, melt them down, and use the material again. To offer longevity, you need to think in a simple way.

We think you may also like Quality of light: How Louis Poulsen stand the test of time