The making of a legend: How the AJ Family became an international design icon

Louis Poulsen acknowledges Arne Jacobsen’s influence on the international design industry and his contribution to bringing simple, functional and distinctive lighting design to the modern interior as it expands the iconic AJ Family further. 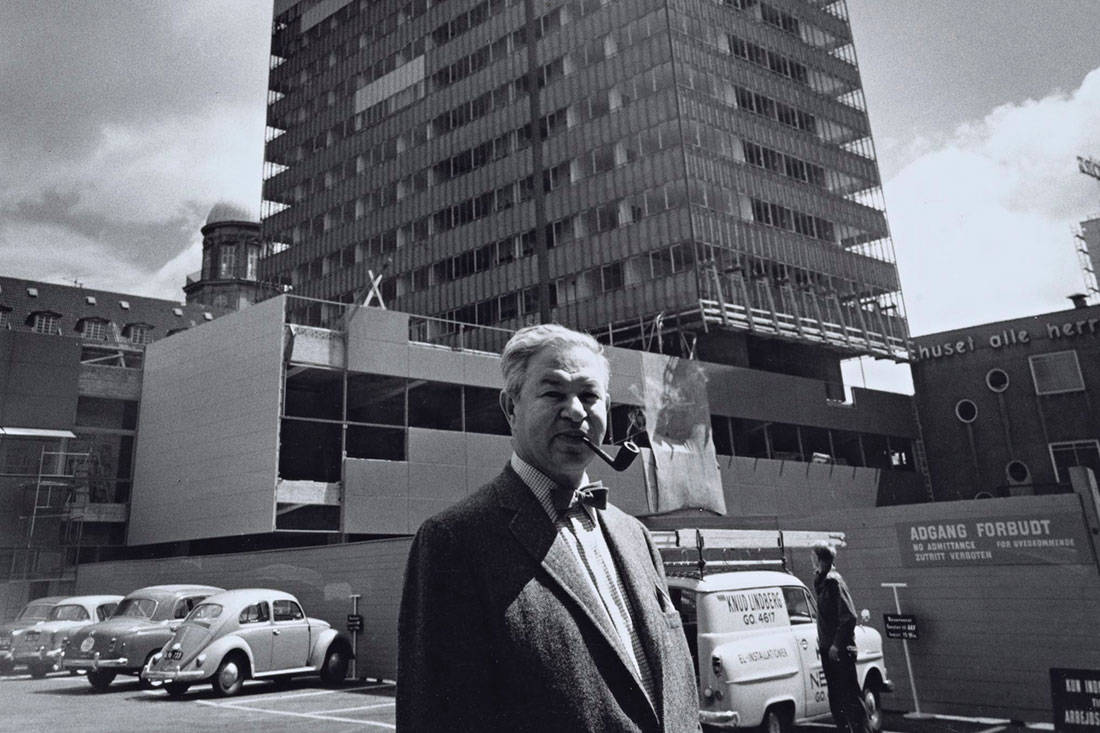 The SAS Royal Hotel opened in Copenhagen in 1960. It was designed for Scandinavian Airlines System by the renowned Danish architect and designer, Arne Jacobsen. As Scandinavian Airlines System entered the jet era, the hotel was a pivotal point for the modernist design movement not only in Denmark but around the world as SAS Royal Hotel gained the status of the first design hotel in the world.

The 22-storey hotel was not only the most modern hotel in Scandinavia but also Denmark’s tallest high-rise at the time. Inspired by New York’s skyscrapers, it was formed out of two rectangular shapes stacked on top of each other – a horizontal bottom one with a vertical one – much taller at 18-storeys – towering above it.

Part hotel and part airport terminal (another first not only for Scandinavia but Europe in general) the five-star establishment was built only 20 kilometres away from the Kastrup airport – and 20 minutes on a shuttle which was also designed by the iconic Dane. 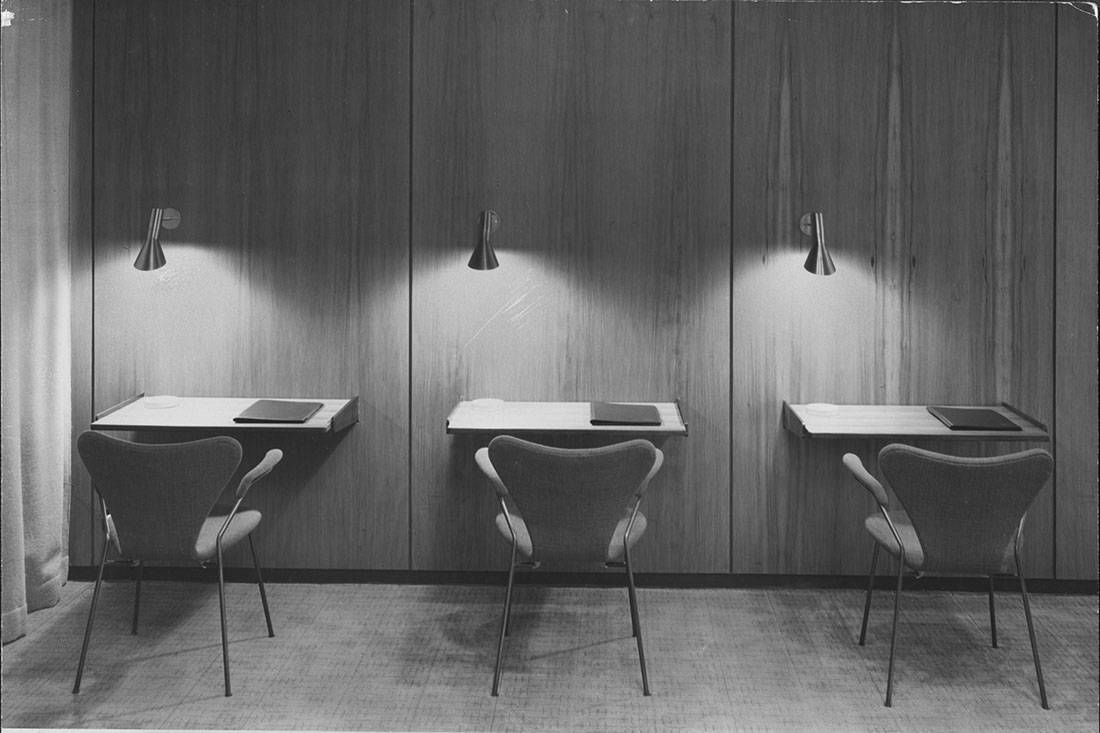 But the shuttle wasn’t the only element designed by Jacobsen beyond the building itself. The SAS Royal Hotel embodied the pioneering spirit of its creator – and so did the fittings and furnishings designed, to the smallest detail, as Jacobsen influenced and designed each element of the hotel’s aesthetics. In this sense, The SAS Royal Hotel represents gesamtkunstwerk – a German term translating to ‘total work of art’ – on an unprecedented scale, with Jacobsen executing a holistic model of his design sensibilities, down to the most minute detail. 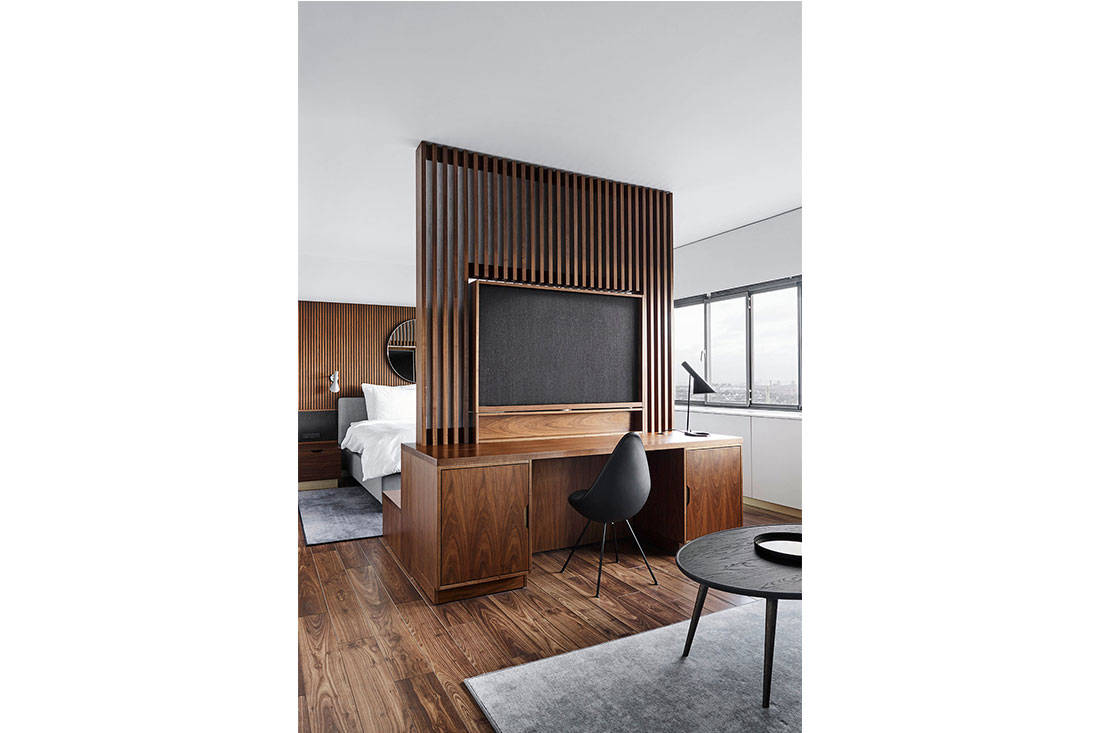 Lighting fixtures played a crucial role in the overall design of the hotel. Arne Jacobsen was one of the architects and designers who not only designed with light in mind – but designed light itself. Bringing his spatial sensitivities, commitment to simplicity and the conviction that form follows functionality, Jacobsen designed lamps and lighting fixtures that have now become iconic symbols of great design worldwide.

Through a partnership with Louis Poulsen, Jacobsen created timeless lighting solutions that up until this day can be found in residential and commercial spaces around the world.

Alongside the legendary AJ Lamp, AJ Royal was a staple lighting design developed for the SAS Royal Hotel. Back in the day simply called the AJ Pendant, the segmented spherical design from 1958 is regarded as Jacobsen’s first move to the basic geometrical shapes that characterise his later designs. 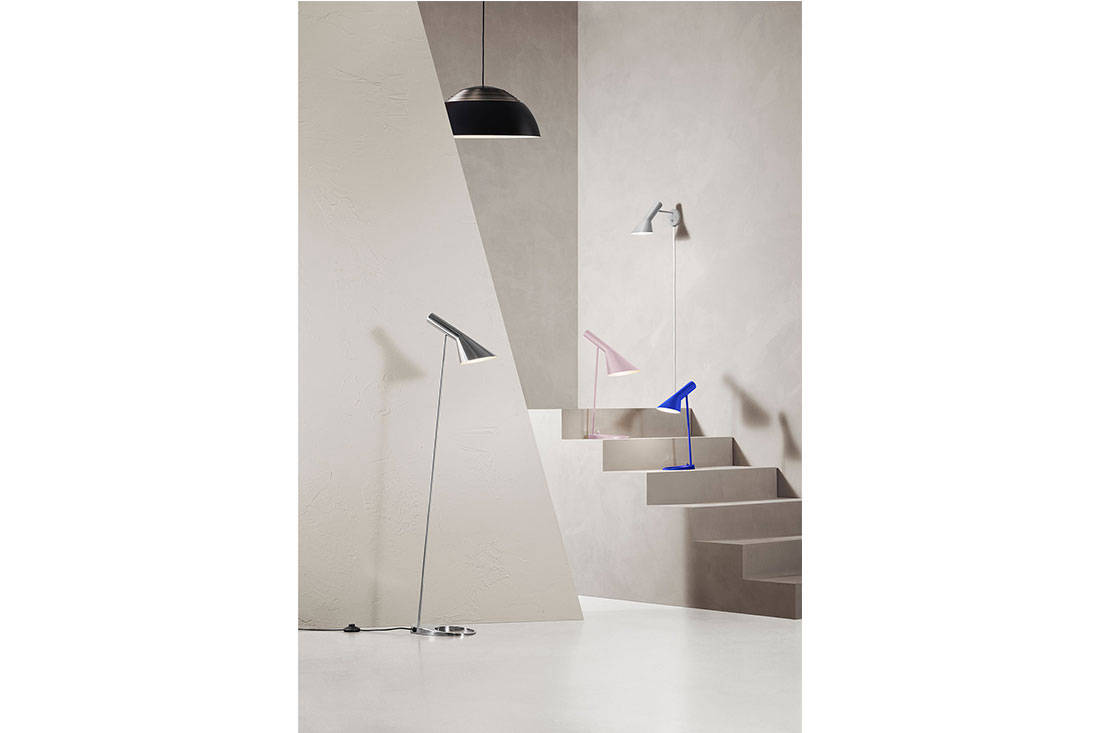 Louis Poulsen presents the new release of the AJ Lamp, AJ Minis and the AJ Royal

While the AJ wall lamp could be found in beautiful rows in stainless steel in the hotel lobby, the classic AJ Royal in the copper finish could be seen in the snack bar behind the atrium, in the lounge on the 1st floor – and in the Panorama Lounge all the way up on the 21st floor.

Originally available in light grey, dark brown and black – the range evolved over the years to include AJ Royal in white, in its two original sizes – Ø 370 and Ø 500. This year, in celebration of its diamond jubilee, a smaller Ø 250 variant of AJ Royal has been added to the collection, and the whole series has been made available in black. The new energy-saving LED version across all sizes and colour variants also comes with a diffuser, offering smoother and glare-free lighting.

At the same time, all variants of AJ Lamp range – AJ Floor, AJ Wall, AJ Table and AJ Table Mini – are being reintroduced in the classic stainless steel, evoking the original look from the early days of the SAS Royal Hotel. 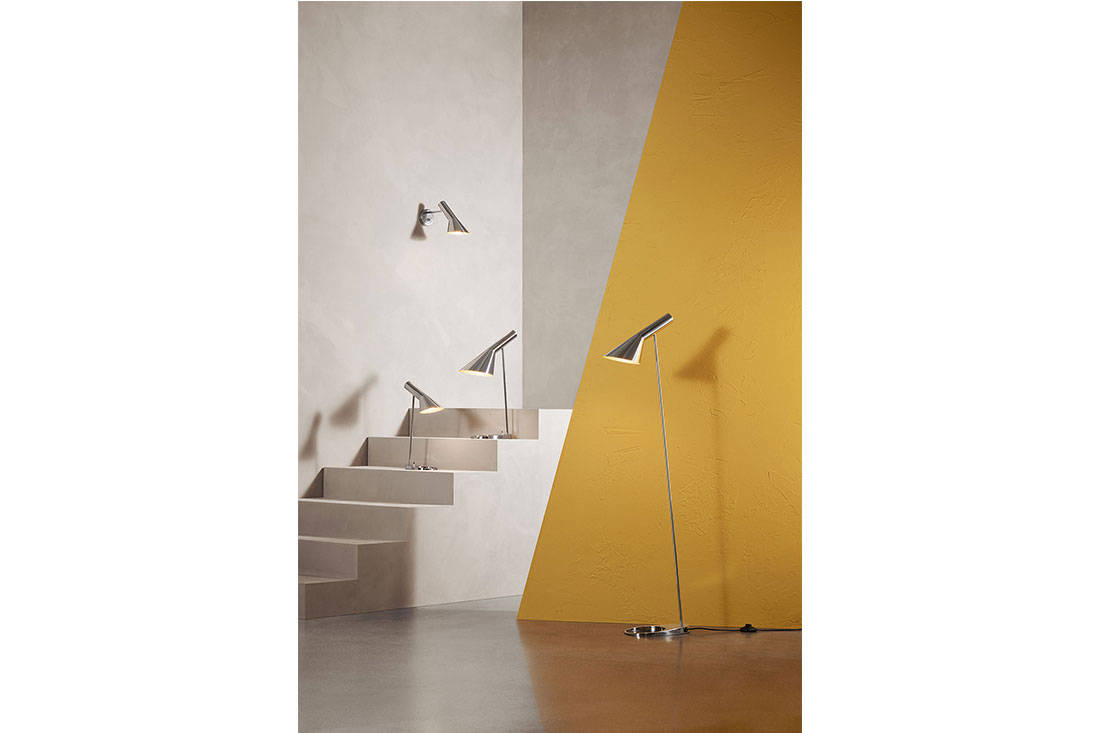 Even though a major 2018 renovation by Space Copenhagen saw Jacobsen’s SAS Royal Hotel transformed into the modern Radisson Collection Royal Hotel, Jacobsen’s modernist legacy is very much present. The legendary AJ Family of lighting fixtures help reflect and support the rhythm of natural light in the renovated guest rooms, highlighting the timeless character of Jacobsen’s designs that still inspires architects and designers today.

The constantly evolving AJ series is also a testament to the designer’s influence on the lighting design industry – and Louis Poulsen. Arne Jacobsen is one of the architects who has played the biggest role in establishing Louis Poulsen as a lighting manufacturer and the brand still takes great inspiration from AJ’s work as it continues the holistic design practice, combining Scandinavian lighting traditions with architectural innovation.

The latest re-release of the AJ range not only embodies Louis Poulsen’s goal of creating functional, comfortable and atmospheric light but also pays homage to Jacobsen’s incredible contribution to the world of architecture, design – and light.