WALA has turned this Australian heritage house on its head, with an addition that elevates living space upstairs and bedrooms downstairs.

Downside Up House in Albert Park, Melbourne, is a heritage-listed Victorian house with a contemporary extension that turns the typical ‘rear extension’ on its head. Designed by WALA, the house has living rooms upstairs, bedrooms downstairs, and a batten-screen facade that references the pitched roofs of the Victorian typology. 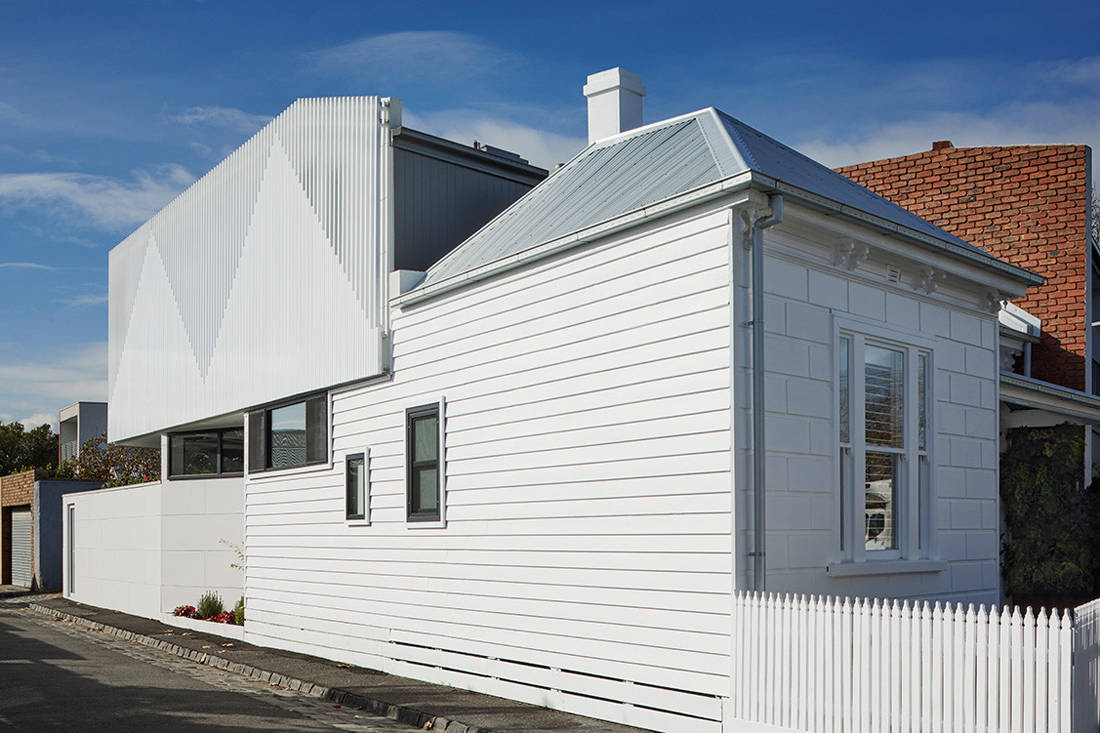 The original building was a double-fronted heritage-listed Victorian house in serious need of repair. The modest-sized, triangular-shaped site presented a challenge on its own accord, not to mention a series of rear lean-tos that had been added in ad-hoc fashion. “Our goal was to retain and restore the existing front of house whilst improving the flow and functionality of the old and new wings of the dwelling,” says Weian Lim, director of WALA. As such, their design response was governed by the strict heritage rulings of the area, and the desire to maximise natural light and the small footprint of the house. 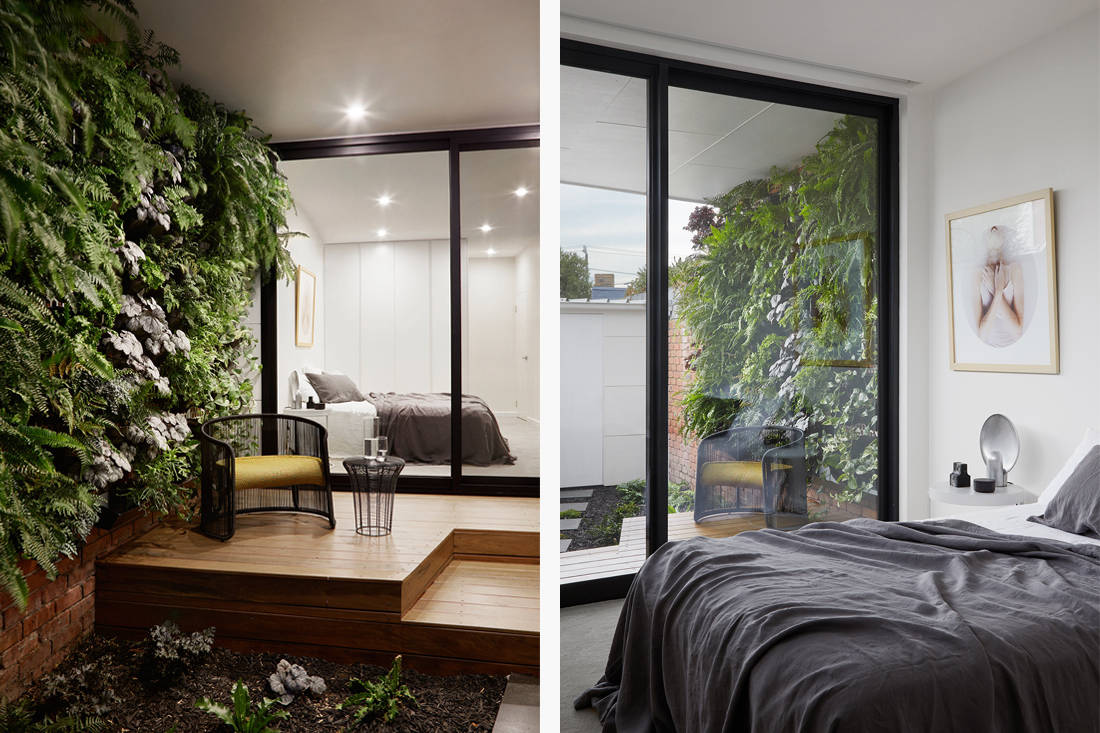 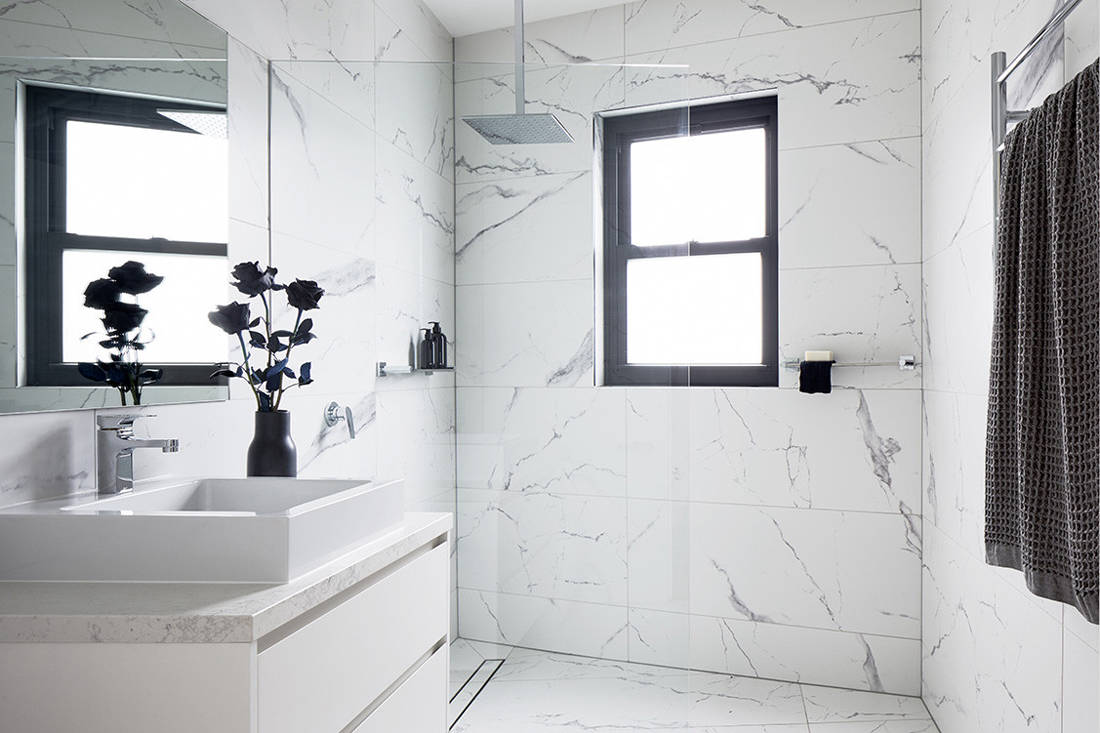 Instead of the typical rear extension that sees living space added to the back of the house, WALA elevated living spaces upstairs with a second-floor addition, retaining the bedrooms at ground level, where they have privacy and security from a new boundary wall on the laneway. 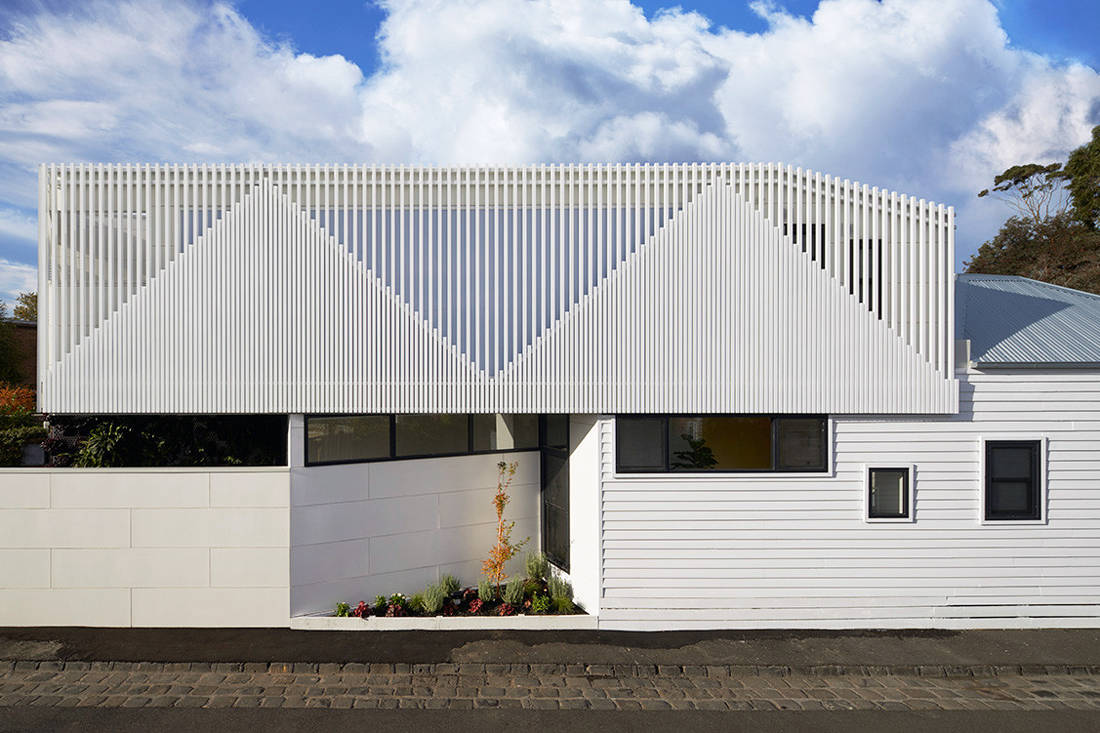 The contemporary addition is clearly distinguished from the heritage building, while drawing inspiration from the forms of the old lean-tos and nearby houses. “The facade celebrates the classic pitched roofs of old Victorians in the neighbourhood by referencing these triangular shapes,” Weian explains. “This aluminium batten screen not only presents a clear external graphic to the laneway, but also protects privacy by shielding views into the neighbours’ gardens.” The all-white palette reinforces the visual impact along the laneway, and has a crisp, clean aesthetic. 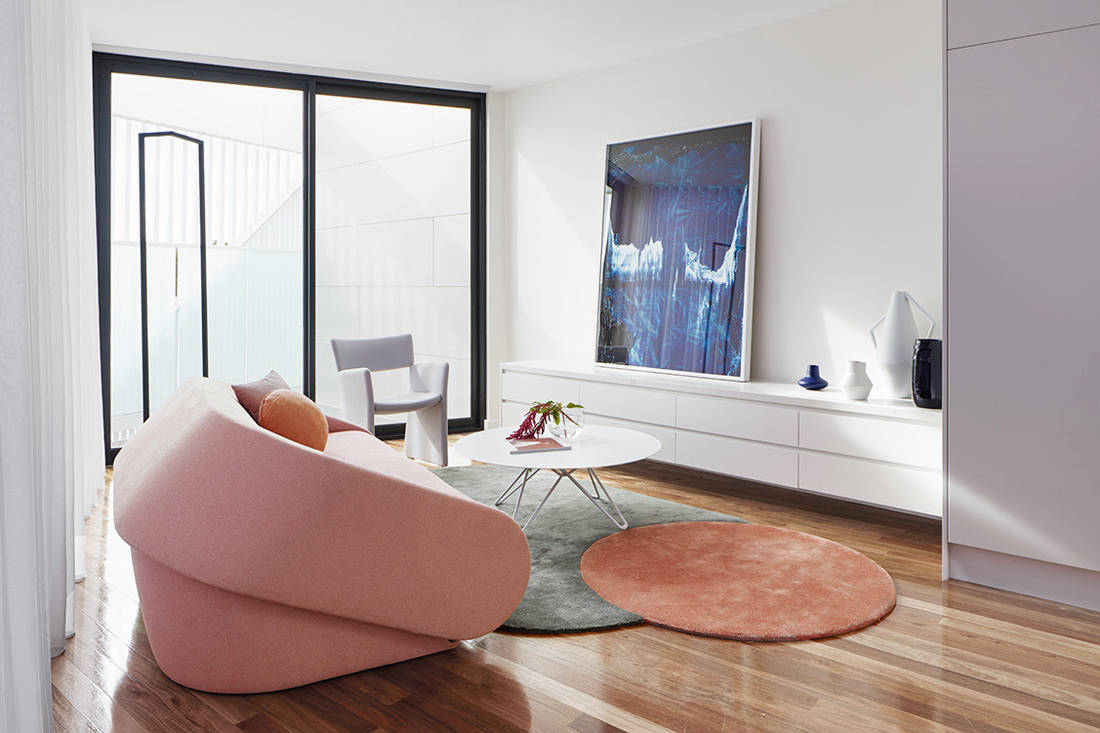 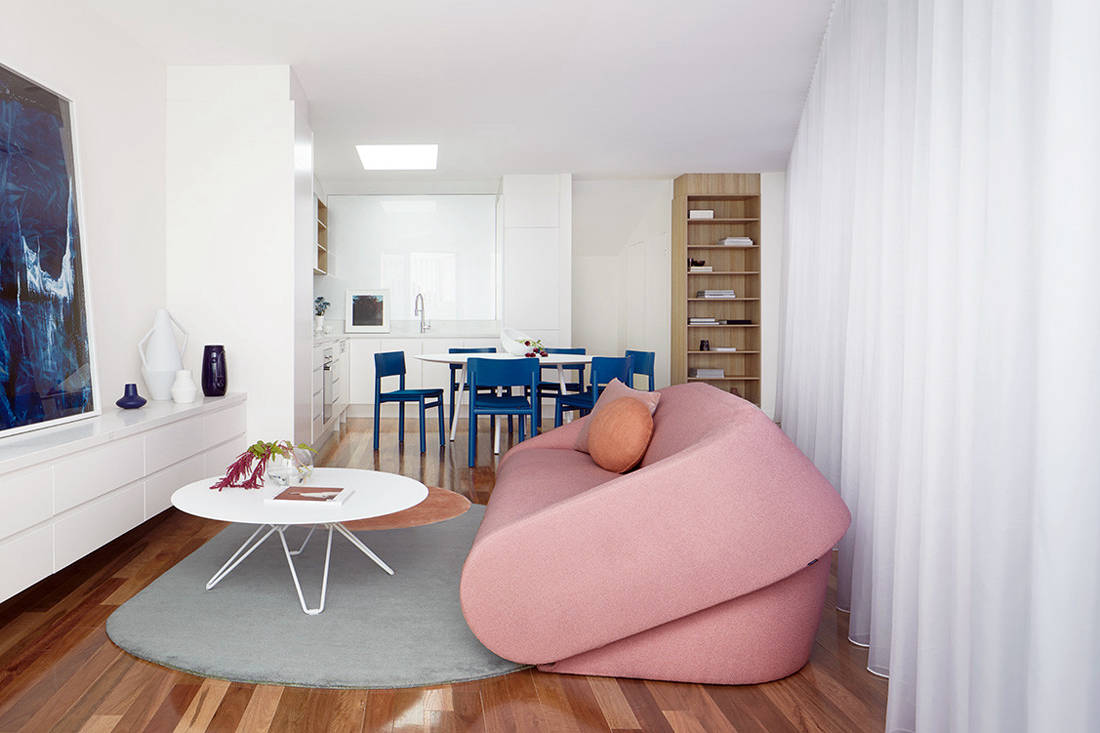 A clear polycarbonate wall on the internal face of the batten facade allows northern light into the upstairs living rooms, like a “wall of light,” Weian describes. “The combination of the polycarbonate wall and aluminium batten screen creates lovely dappled light from mid-morning to early-afternoon, negating the need for artificial lighting.” The living spaces are bathed in soft light during the day, and glow like a lantern when illuminated at night. 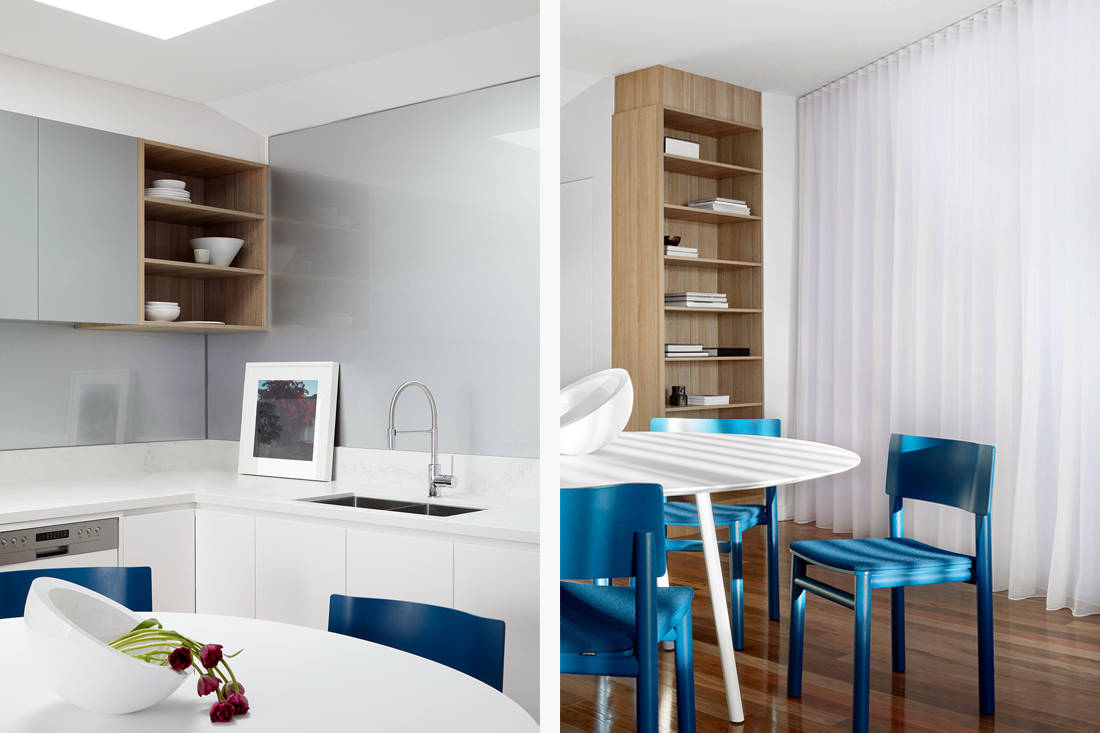 External and internal finishes introduce texture and complement the old and new. Aluminium-framed windows and glazed sliding doors are a modern contrast to the existing double-sash, timber-framed windows, and the precision and uniformity of the aluminium batten screen upstairs juxtapose the hand-laid weatherboard cladding downstairs. A cement composite sheet panel on the new boundary fence is arranged in a stretcher-bond pattern to add to the geometries along the laneway. 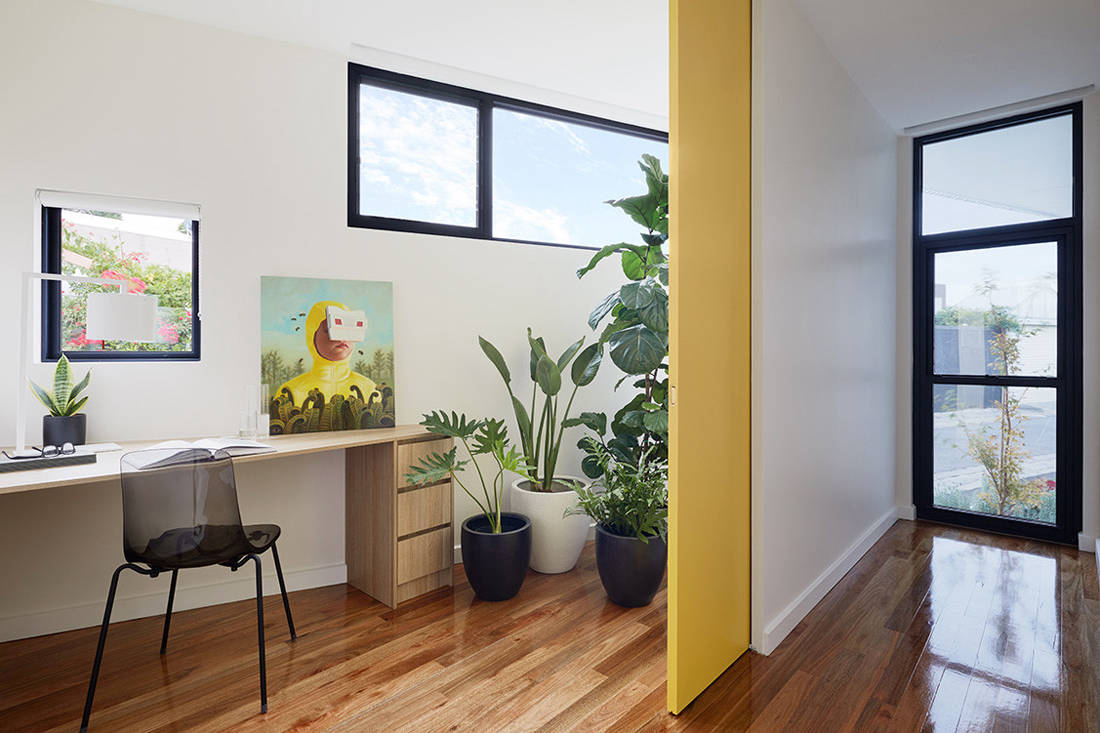 WALA carved out a pocket garden along the side of the house for the benefit of the laneway. “We wanted a feature that promotes engagement with the street and its pedestrians,” Weian says. Angling the boundary fence towards the house enabled a small garden to be planted for the owners and passers-by to enjoy.