Small can be beautiful in this 528sqft Hong Kong home

There are many ways to tackle the constraints of small square footage. Studio Adjective’s clever space planning and use of materials for an apartment in Hong Kong makes an exemplary case study.

Hong Kong’s residential interiors are infamous for being diminutive. It takes innovation and sensitivity to create comfortable spaces that cater to living, cooking, eating and resting, among other daily rituals. The Taikoo Shing Apartment by Hong Kong-based Studio Adjective is an example of that innovation. 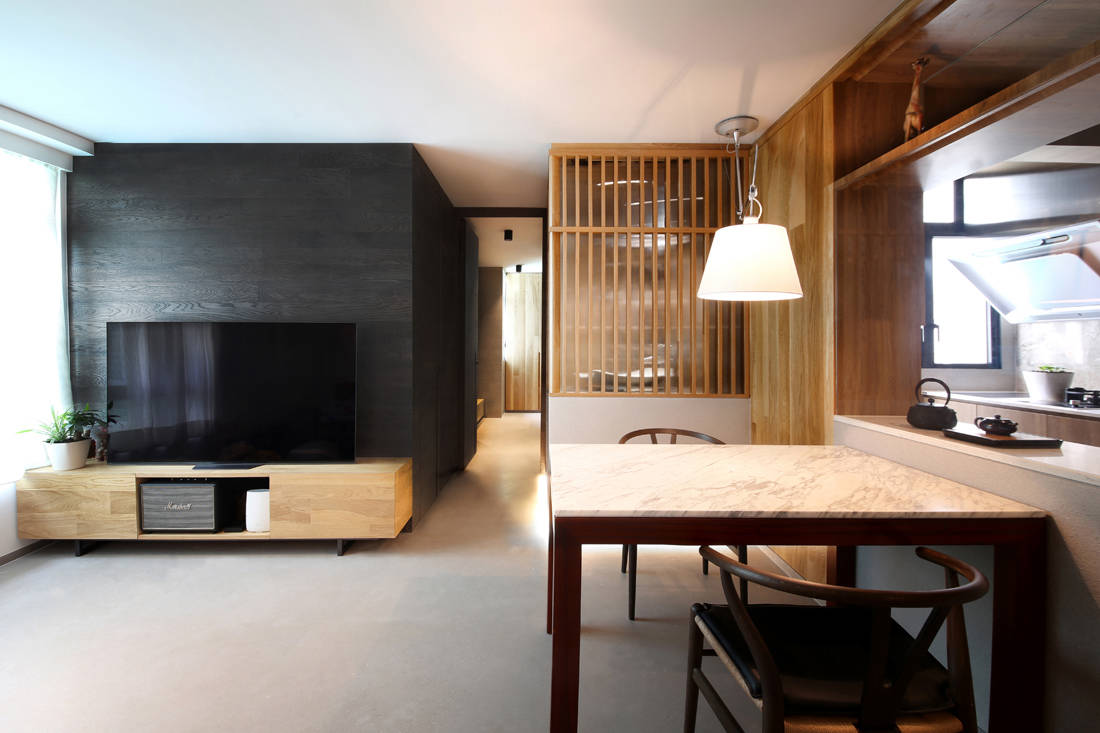 The 528sqft, two-bedroom apartment was opened up to remove wasteful spaces such as a corridor, and create a feeling of flow and spaciousness. “The service area was taking up half the living space, potentially making the apartment smaller and creating a strong feeling of oppression,” shares Studio Adjective’s co-founder and Design Director Wilson Lee. Interior walls were removed and rearranged to incorporate a guest bathroom and dressing corner as requested by the homeowner.

The design also considers the homeowner’s interest in Chinese architectural aesthetics and tea drinking. Specifically, Wilson was inspired by the building principles of the siheyuan – a historic dwelling found throughout China that generally comprises a complex of rooms arranged around a courtyard, or layers of courtyards. A screen wall inside the gate is commonly positioned for privacy. 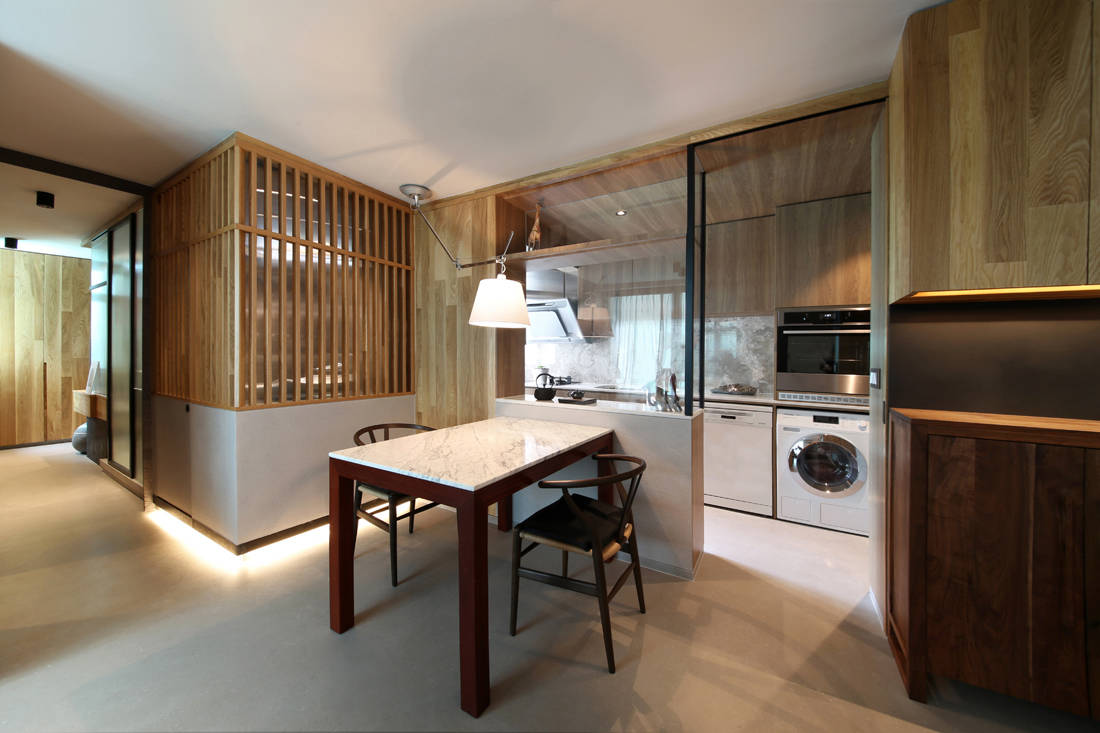 In this Hong Kong home, the kitchen and bathrooms are designed as ‘pavilions’ with overlapping clear and transparent layers to soften the boundaries between zones. “It also creates [increased] visual depth for the compact apartment without compromising functional needs,” says Wilson. 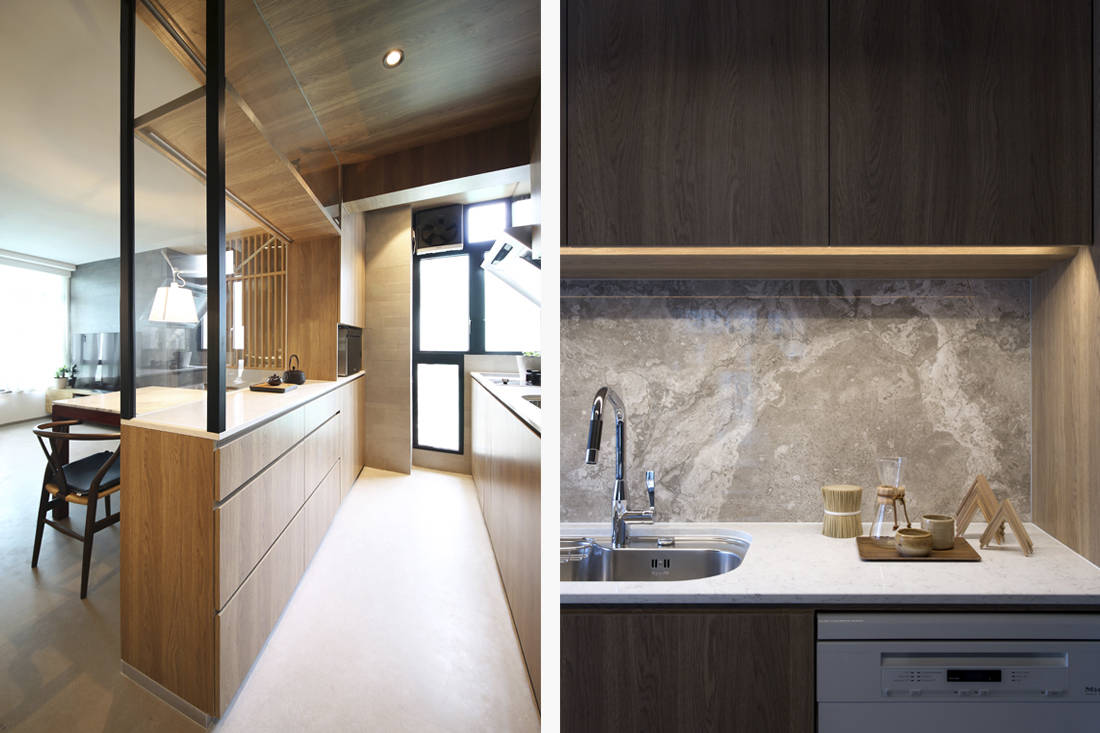 One enters the apartment into the living space with the dining on the right. A metal frame-and-glass partition loosely divides the teak-wrapped kitchen and dining area, while also storing tea-making equipment. “There’s no solid separation so one can view the tea-making process in the kitchen from the living area,” highlights Wilson. 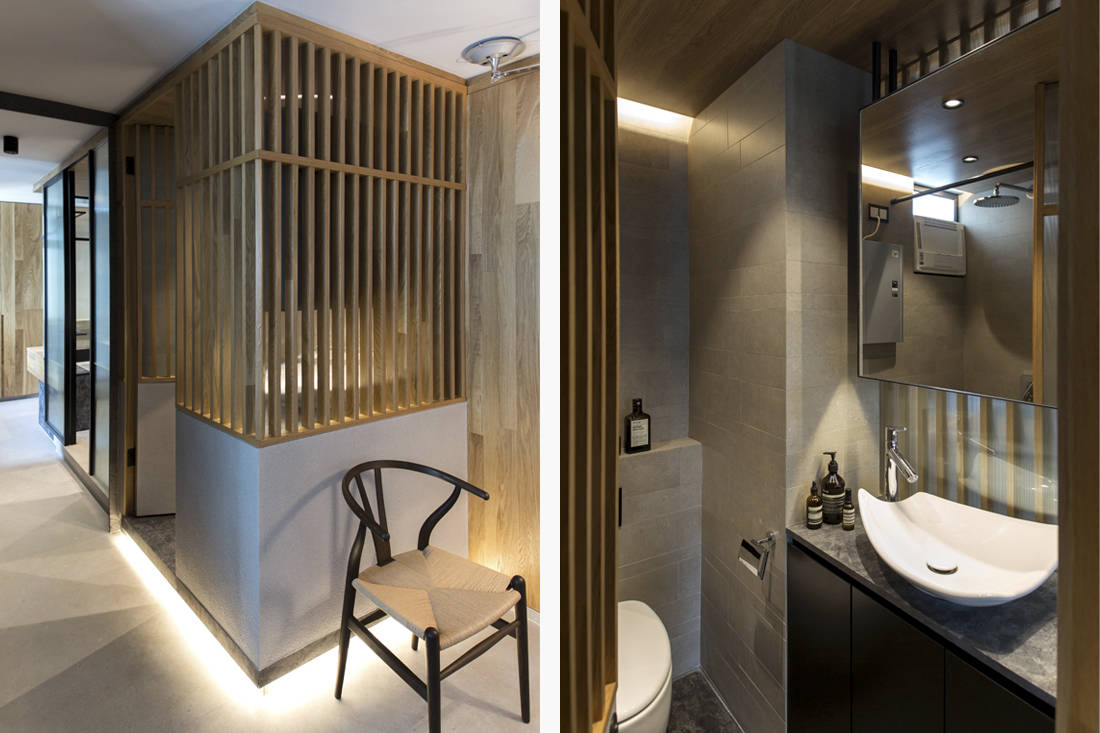 The guest bathroom behind the dining table is demarcated by a structure of grey stone tiles, and a screen of timber fins and fluted glass. Light penetrates the transparent shell, mimicking a lantern while providing additional illumination for the adjacent spaces. A light cove beneath this structure serves the same function in a neat, minimal way. 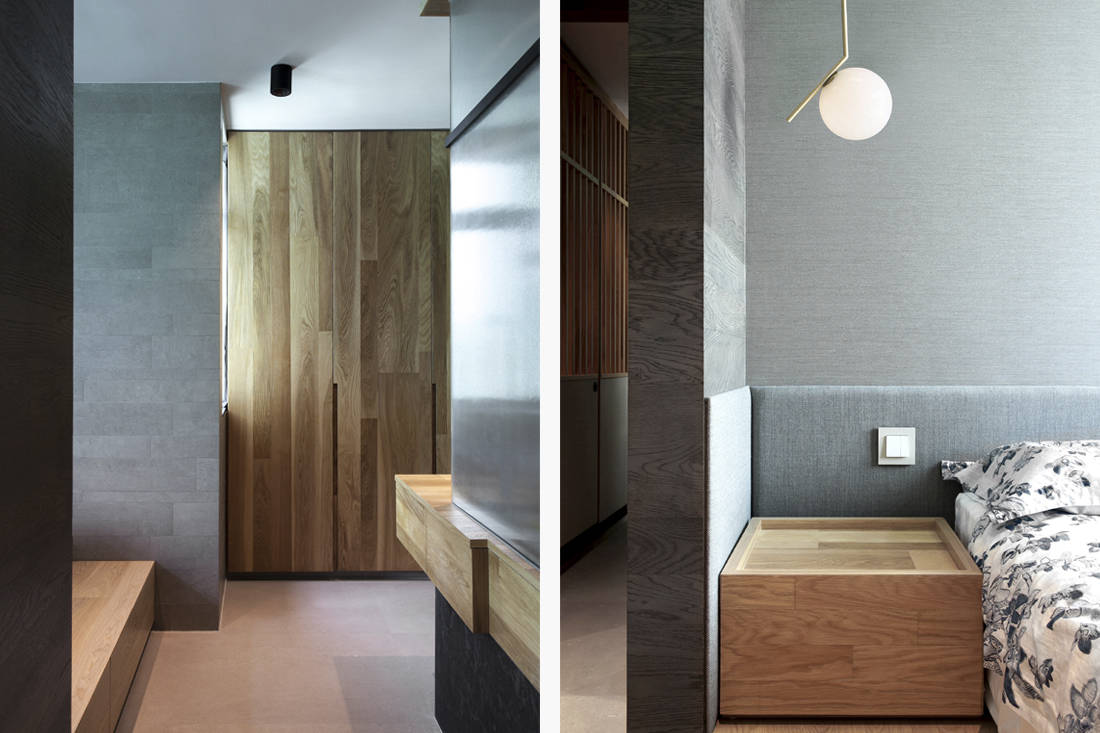 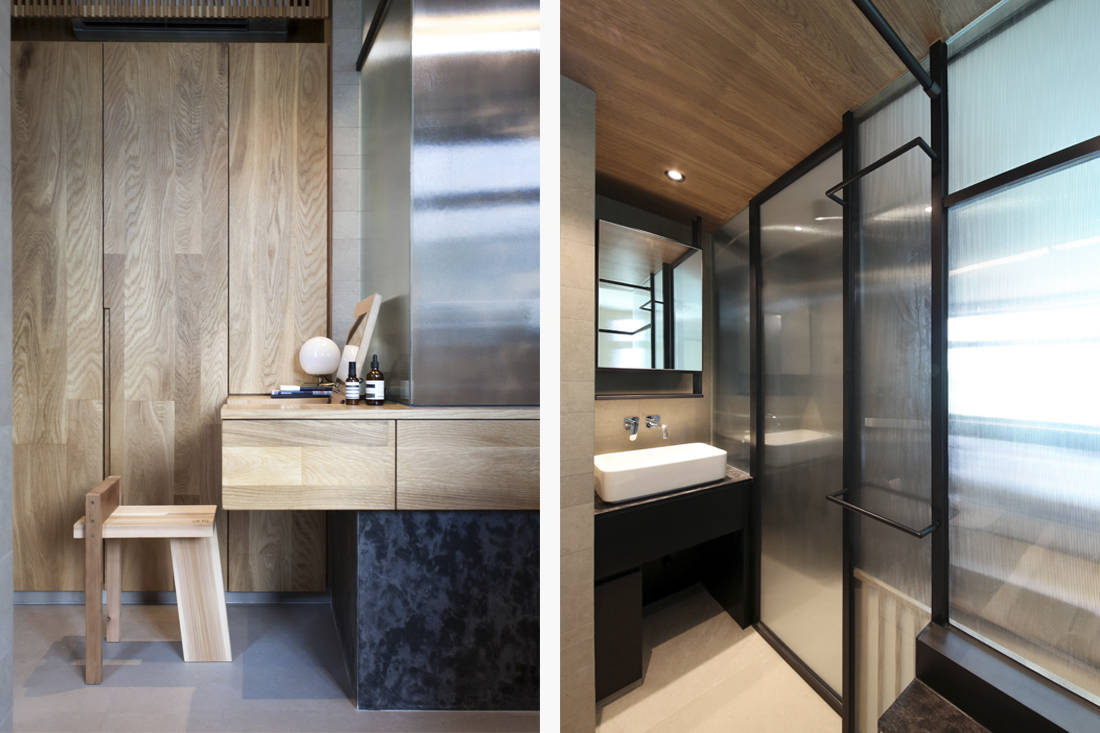 Further in, the master bathroom is clad with metal and fluted glass. Light oak, found in the kitchen, echoes the wardrobes, platform master bed and cantilevered dresser – the latter of which aids in the creation of a feeling of lightness.

The varied material palette: grey honed marble flooring, stone-tile wall cladding and teak, was also influenced by traditional Chinese buildings. “We tried different gradients of grey in the space to deliver different textures and feelings when you touch the surfaces,” says Wilson. 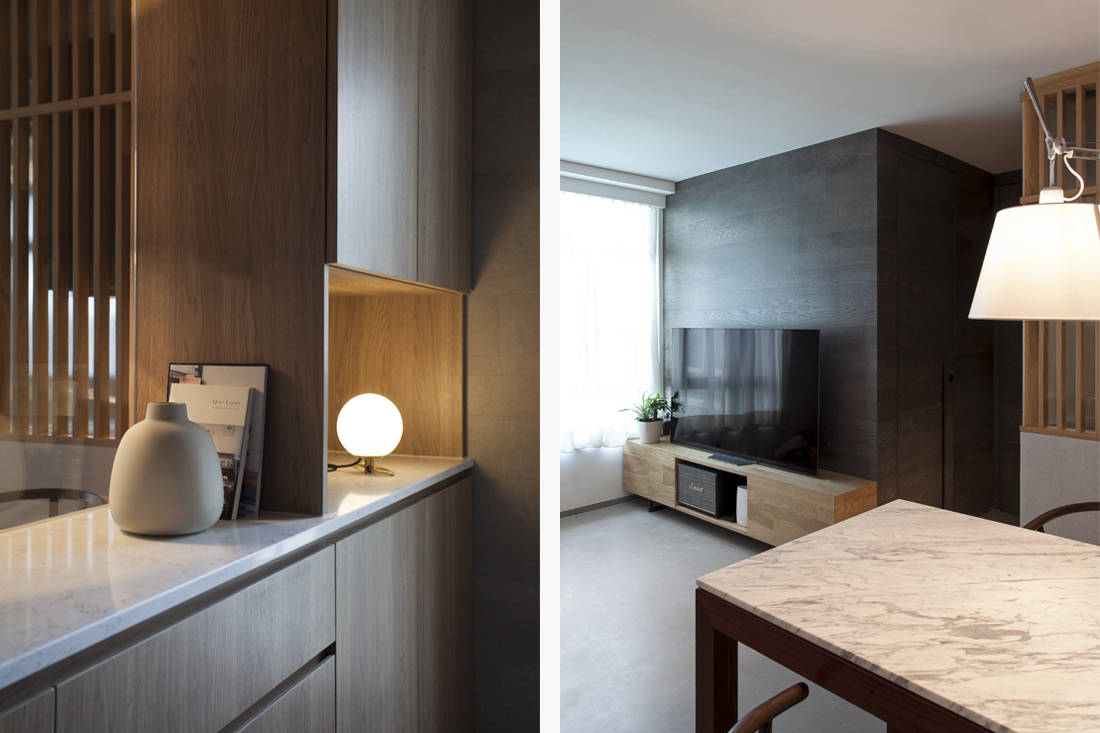 The amalgamation of patterns and layers on the right side of the apartment contrasts with the more minimal living area, backed by the TV wall wrapped in dark, smoked oak, which Wilson describes as “creating a flow between the living room and bedrooms, connecting the apartment horizontally while concealing the bedroom doors.”

Typically, many would default to a white foil to create the illusion of space. Wilson eschews that strategy for one that employs layers, contrasting light and dark planes; and the combination of materials in a fluid, bold manner, in order to enhance the spatial quality of the tight space. The result is a home that offers many points of interest and an intimate ambience that works with, not against, the original spatial structure.