This luxury penthouse is a playground of bold hues, and unexpected motifs and textures. Nestled in The IVY residence in Gurgaon, New Delhi, it’s a modern interpretation of Neo-Baroque interiors with an eclectic, yet refined design scheme put together by Akshat Bhatt, the principal architect of Architecture Discipline. 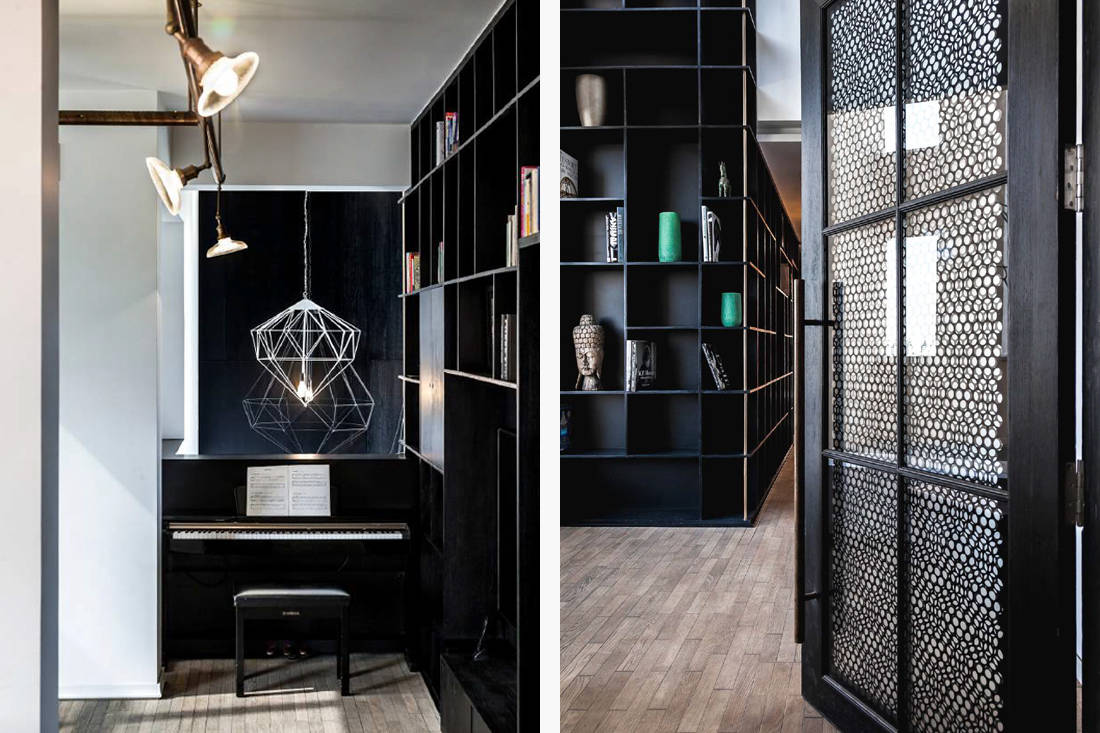 Step through the semi-private frosted glass door of the penthouse, and the first thing that greets visitors is a large scale black bookshelf, on which the homeowner displays various collectibles. It stretches from the first floor to the ceiling of the second, emphasising the double-volume space within the penthouse while evoking a sense of modern grandeur. The double-height feature extends horizontally into the inner sanctums of the abode as well, leading the eye towards the end of the hallway and into its private quarters. 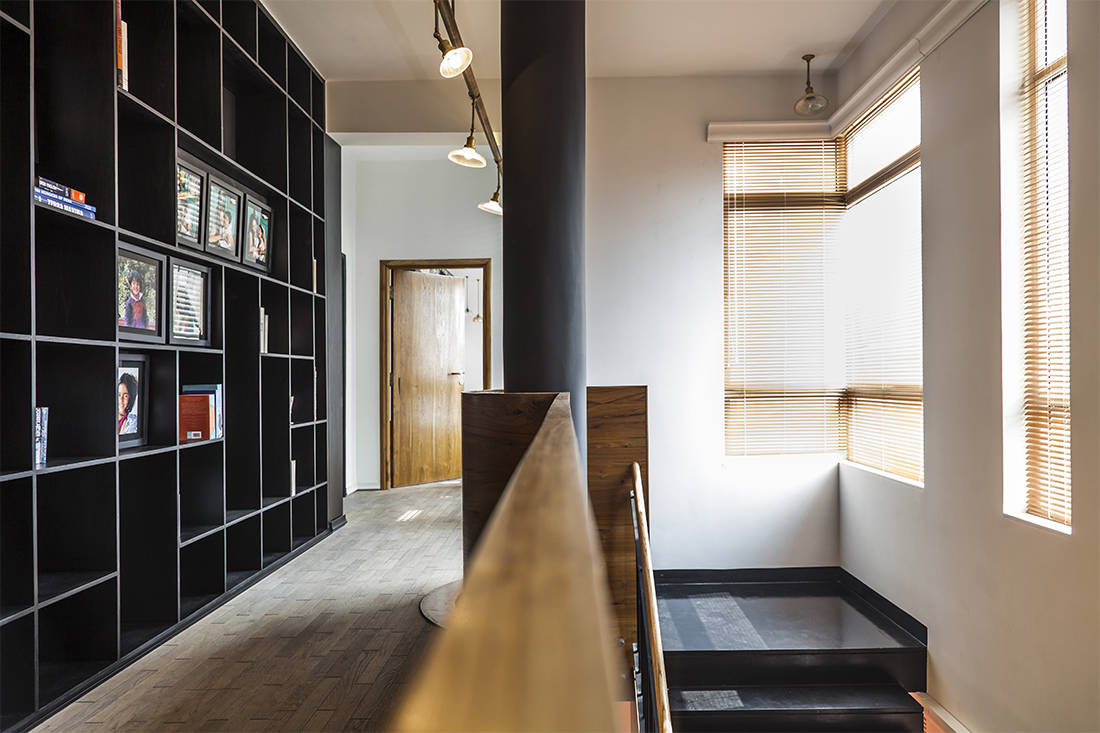 Past the sleek, industrial-style entryway and the true character of the luxury penthouse unfolds, fluidly marrying the seemingly incompatible styles of luxury and eclecticism. It strikes a balance between the two by keeping the spaces as pared-back as possible, relying not on multiple objets d’art or embellishments such as rugs and paintings, but bold statement furniture pieces to occupy visual space without overcrowding the rooms. 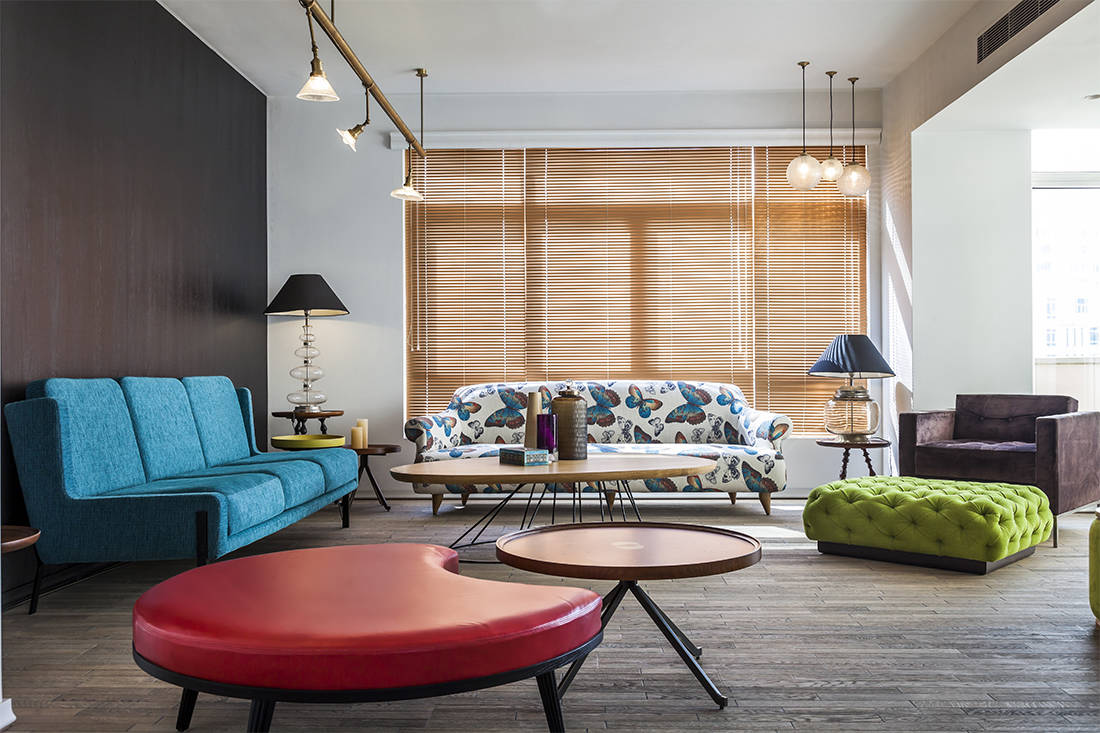 A simple coat of dark blue paint, for instance, creates a feature wall in the living room that injects a touch of character to the space. It contrasts the warm wood flooring, and serves as a backdrop to a medley of mismatched sofas – one is upholstered in a patterned fabric of butterfly motifs, while the other is in a striking shade of bright blue. Also in the mix is a lime green ottoman, and a siren red, crescent-shaped bench, offering multiple points of visual interests such that they render additional adornments unnecessary. 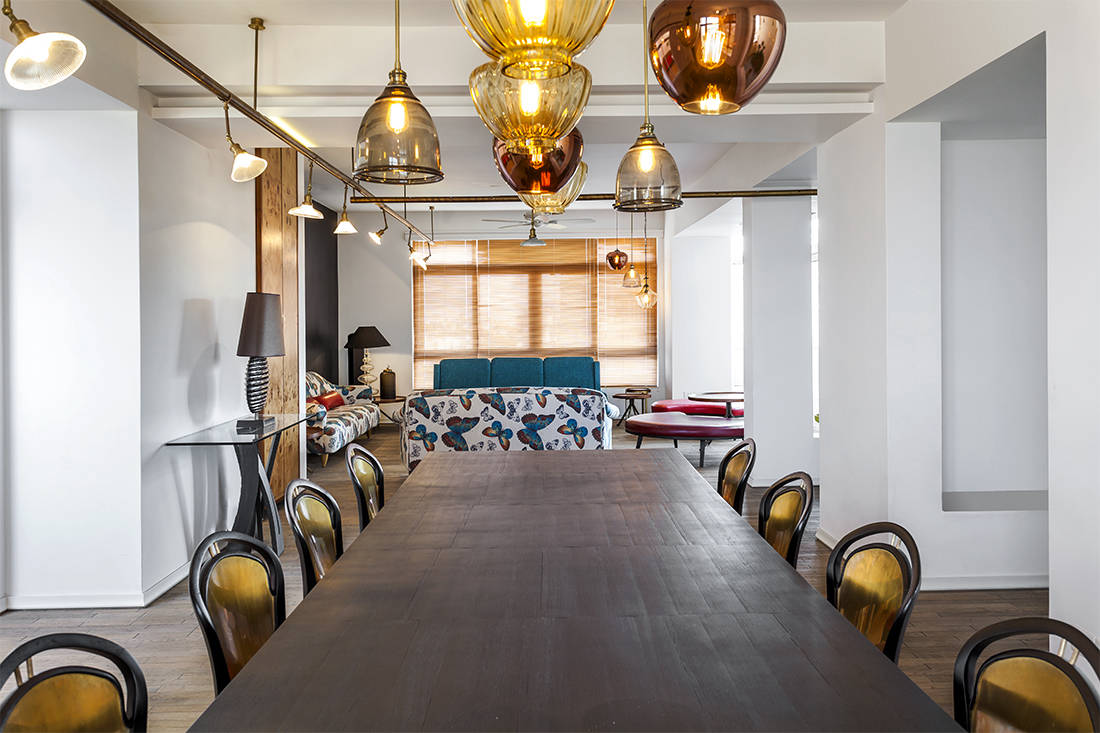 The abundance of seating areas allow its residents to accommodate large gatherings. Likewise, the colossal dining table that fits at least eight folks – situated adjacent to and directly accessible from the living room – is built to entertain. 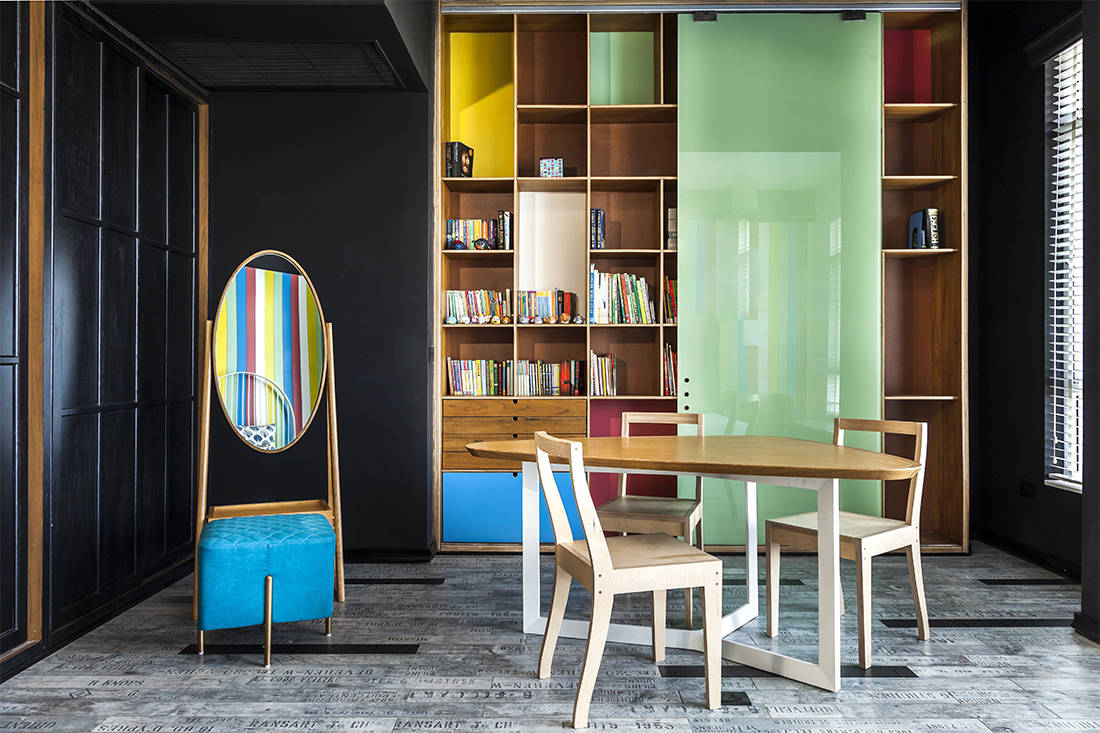 The study on the first storey of this luxury penthouse doubles as the daughter’s bedroom with a hot pink door and a rainbow-coloured timber headboard that looks straight out of Willy Wonka’s chocolate factory. The study area, on the other hand, is given black walls and a bookshelf unit with pops of primary colours to maintain the technicolour theme. 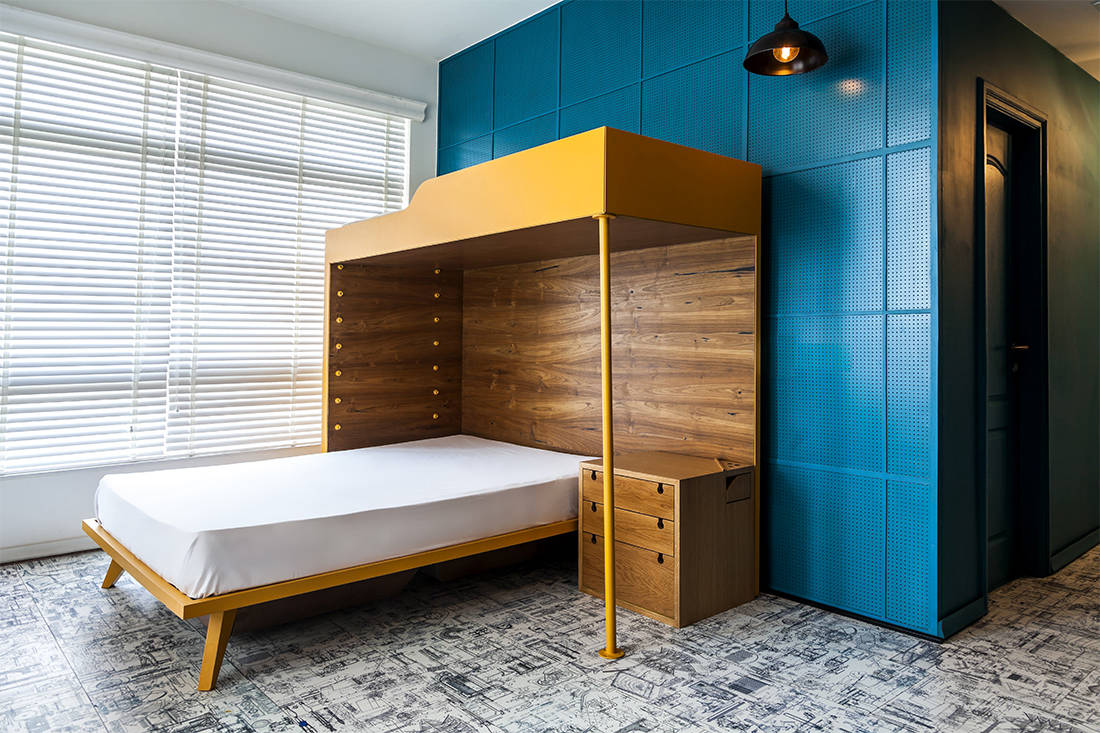 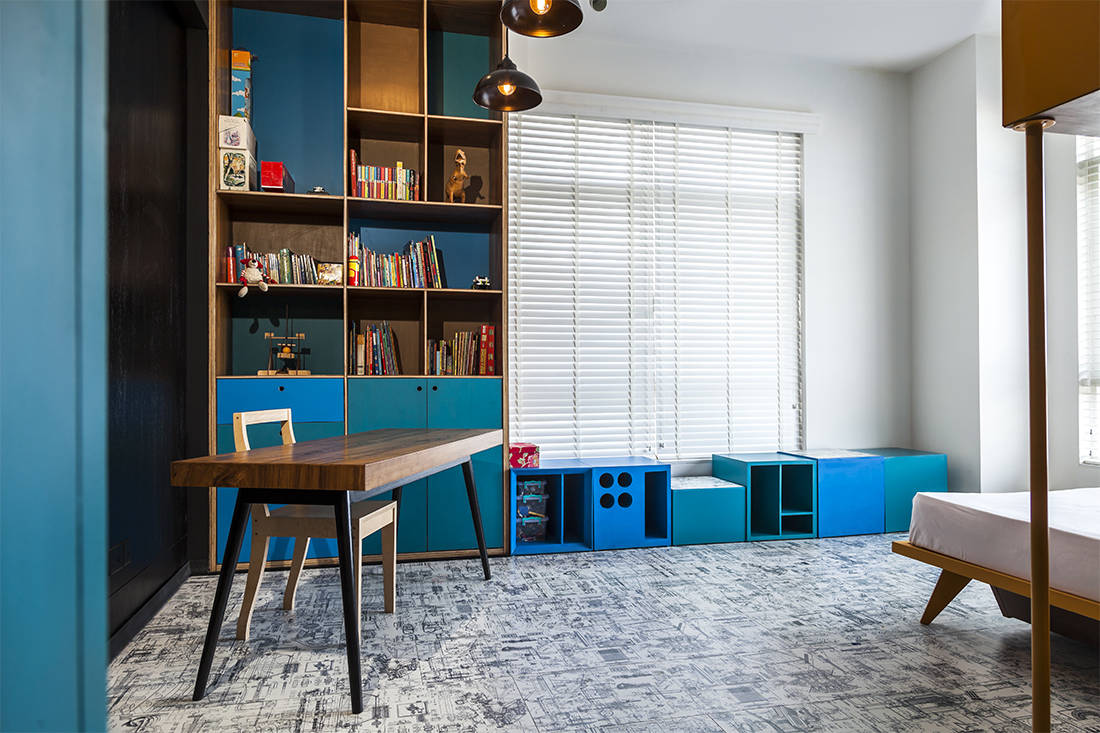 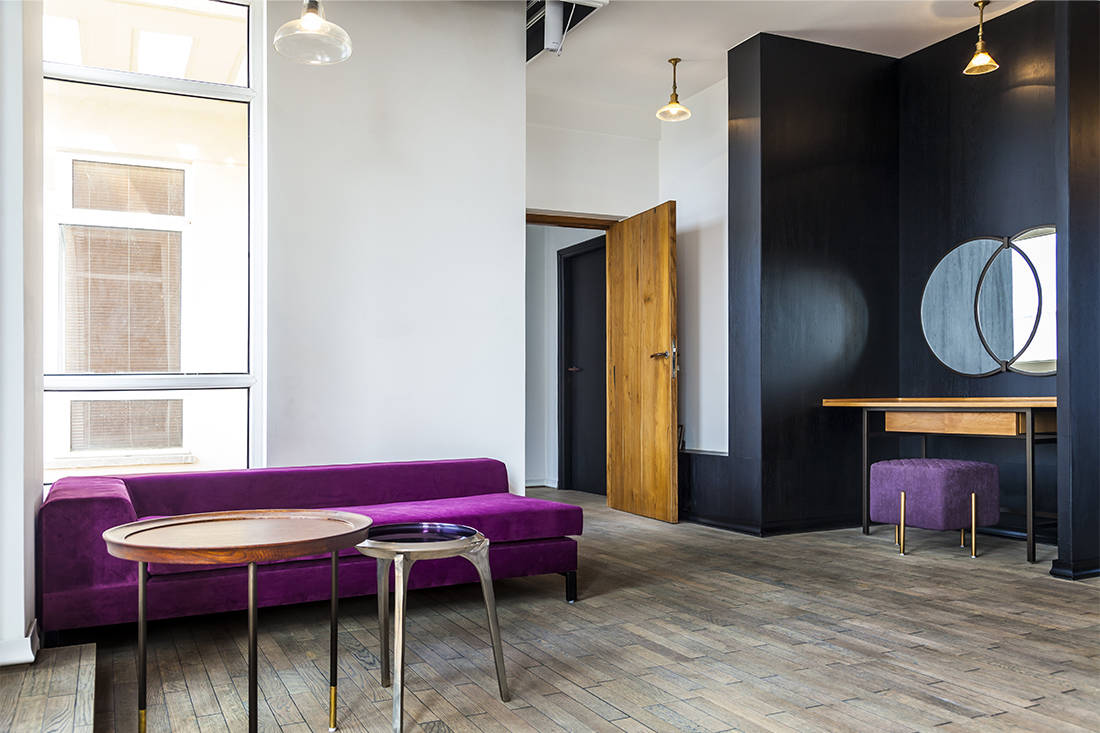 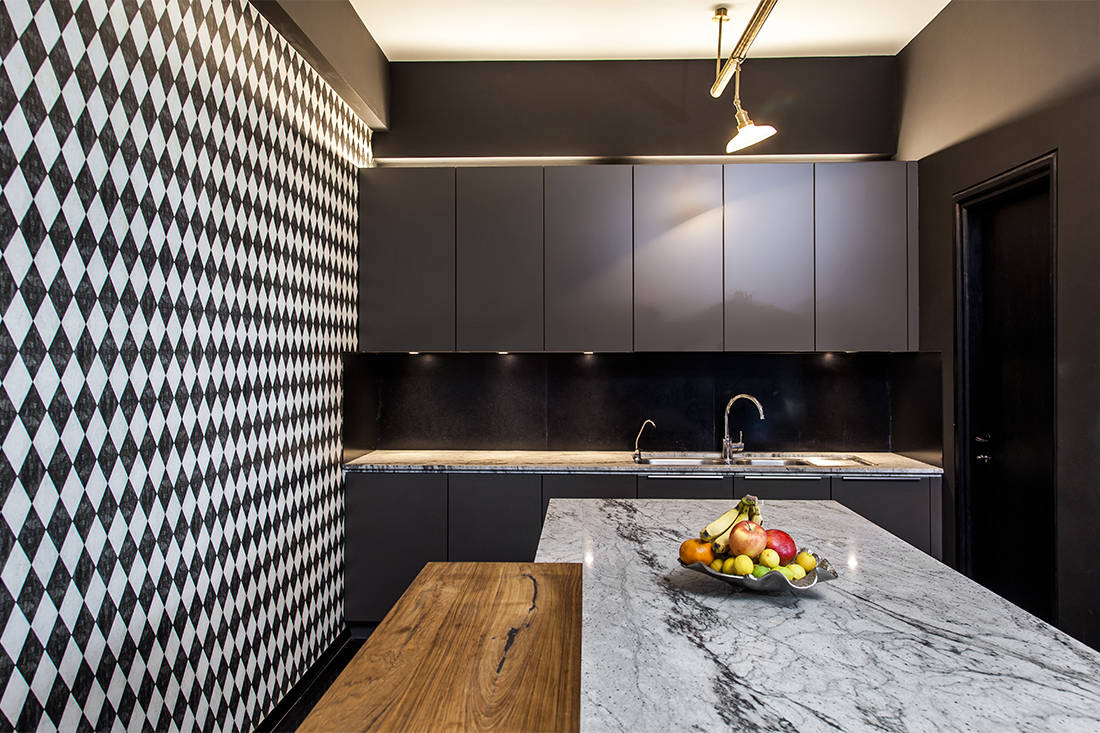 While the other bedrooms play with accent colours such as purple, blue and yellow – balanced out by wood furnishings, black walls and sleek furniture for a dose of sophistication – the kitchen space follows a largely monochrome decor scheme. Nonetheless, it manages to give off a sense of upscale eclecticism with its combination of warm wood, marble and a black-and-white diamond-patterned wall. 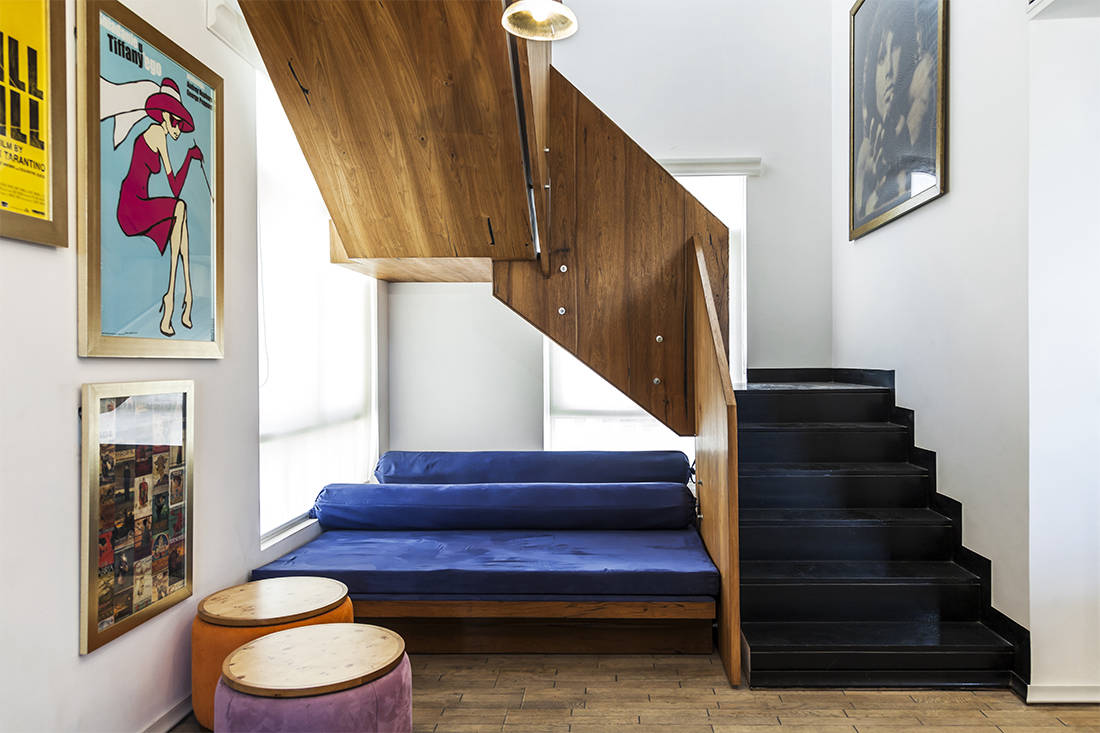 Style meets stature at the stairwell, featuring black-painted steps and a teak balustrade. Exemplary of the penthouse’s modern luxe architecture, its geometric, slightly offbeat design boasts a lightweight appearance and makes room for a cosy corner beneath it, transforming an underutilised space into a mini lounge. 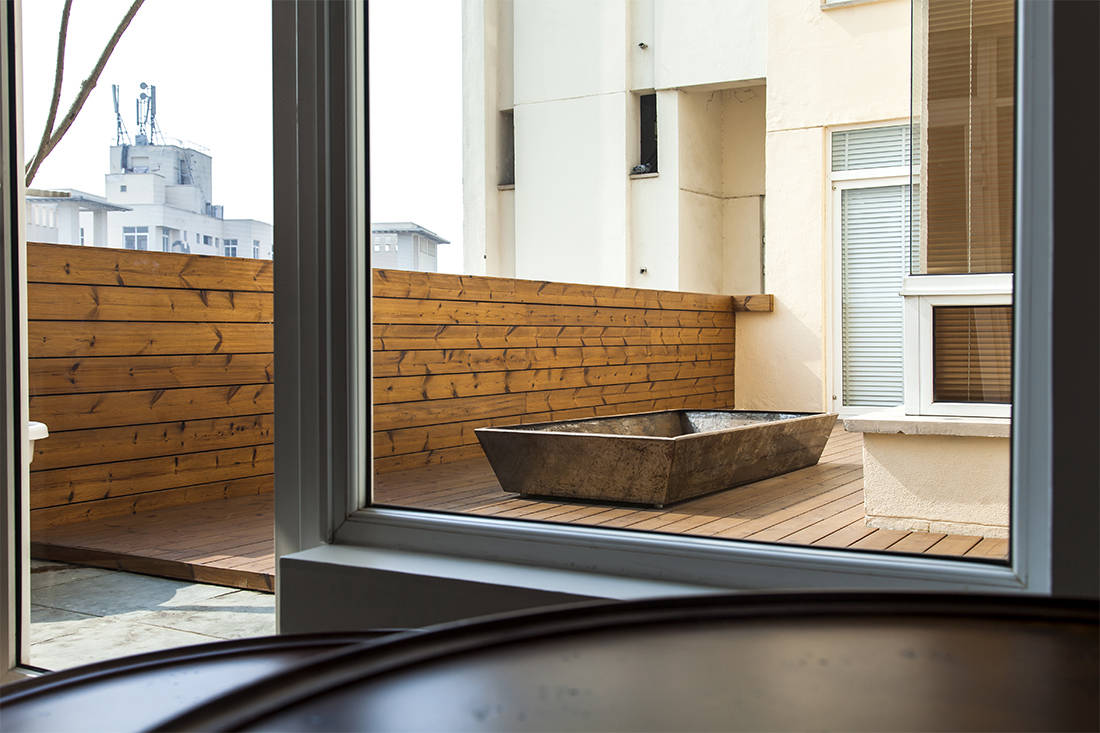 The heart of the home is the balcony, which serves as a light well and a source of ventilation in the middle of the house. It is an oasis of calm, as compared to the rest of the flamboyantly decorated penthouse, with pinewood-clad walls and floors to match the surrounding foliage. The juxtaposition of light and dark, simple lines and bold patterns, smooth and textured, are all delicately strung together in a rhythmic pattern that formed a complex yet expressive symphony of a home.